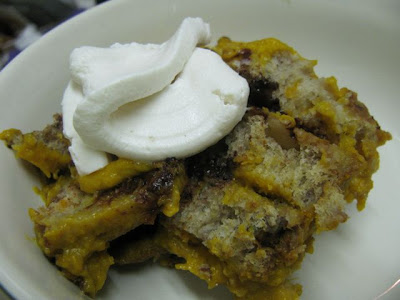 E says that the road from Melbourne to Geelong is one of the most boring sights in the world. Well, you probably have heard of the Chinese curse, ‘may you live in interesting times.’ Likewise I can tell you that boring is sometimes kinder than interesting. I visited family in Geelong on Friday and on the way down and back there were interesting events that I would not recommend to anyone. 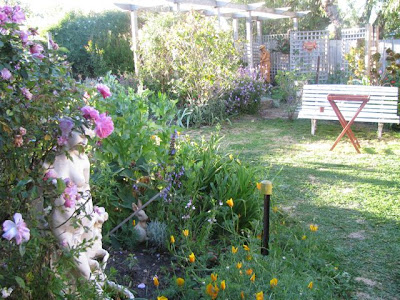 The event on the way there did not effect me much directly. It was a road accident that was so freaky it shakes your confidence in the world. A motorist stopped to help someone who had broken down and as he returned to his car he was hit and killed by a wheel flying off a passing truck. I am sure this is hard for his family to make sense of such random misfortune and I have been thinking of them. I heard about it just after I left and the reports said that the Princes Freeway was closed so I went via the suburbs to avoid it, which added quite a bit to my travel time.

We had a lovely time at my parents’ place. Friday was the birthday of my sister, my uncle and my grandmother. Susie and my grandmother were there and we have a roast dinner and sponge cake to celebrate. Sylvia had her dinner there next to her big cousin, Cooper. Fortunately my parents have two high chairs for the babies to sit in. It was a gorgeous sunny day and we were able to sit in the garden amidst an explosion of colour in the flower beds. 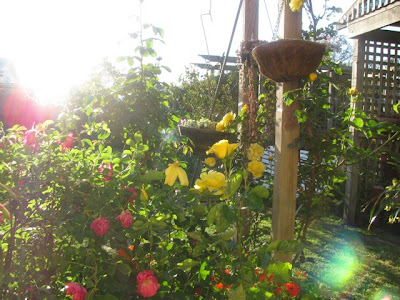 Unfortunately sunshine means that if you put on your parking lights on the car by accident it will be difficult to notice. By the time my brother told me I needed to turn off the lights they had been on for a few hours. So when I was tired and ready to go home with Sylvia settled in her car seat, I turned on the engine and found the battery was dead. 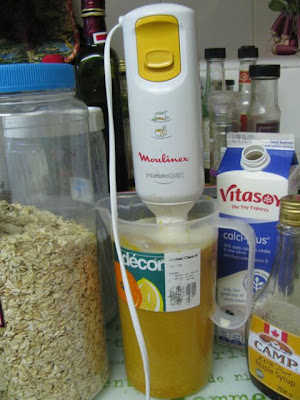 Ironically I had looked at my overdue bill for our roadside assistance scheme before leaving and thought surely I wont need to call on them today. But call, I did. Fortunately they didn’t quibble over a few days overdue payment and they didn’t take too long to arrive. My dad went out to meet them. Finally I went out to check how it was going and the car had gone. For a brief moment I thought my luck really was out today. Minutes later my dad drove it up to the house because he was giving the re-charged battery a burl. 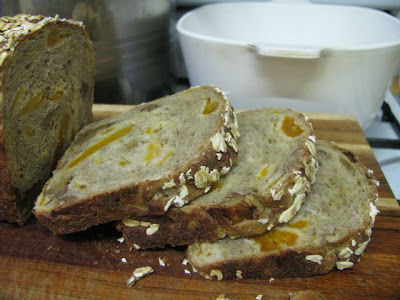 I was tired driving home but was heartened by the thought of leftover pumpkin and chocolate bread pudding waiting for me in the fridge. It had been a long time coming. I went for coffee at Andre’s on Sunday with my friend Heather and bought a loaf of day old fruit bread. It seemed destined for bread pudding so I roasted some pumpkin for that purpose on Monday night and finally made the pudding on Thursday.

Now while life can be cruelly random, it can also be kind to us. I sometimes am amazed at how many food blogs are out there and it seems like good luck to chance upon some which have lots of recipes I want to try. Two of these are Ricki’s Diet, Dessert and Dogs and Meeta’s What’s for Lunch Honey. Some months ago I bookmarked Ricki’s healthy recipe for Pumpkin Bread Pudding with Warm Caramel Sauce and Meeta’s decadent Roasted Pumpkin and Chocolate Bread Pudding. 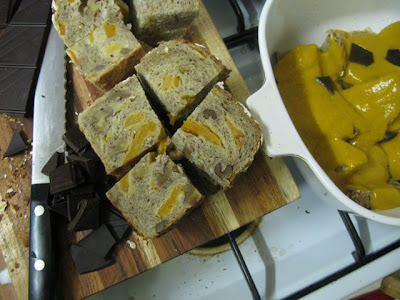 I took the chocolate and spices from Meeta but left out the eggs, cream and butter. I took the oats and soy milk from Ricki but didn’t feel the need or have the energy to add the warm caramel sauce. I used maple syrup which seemed so much nicer and appropriate than sugar. The result was a delicious Pumpkin and Chocolate Bread Pudding that was both healthy and decadent. The pumpkin sauce was a thick and comforting custard that could be eaten by itself but was even better with swirls of melting chocolate. The dense sourdough bread with generous studs of walnuts and dried fruit was lovely soaked in the sauce.

I can’t tell you enough just how fantastic this pudding was. I was shocked that E was not keen on it, even with a dollop of Soyatoo slag cream - he didn't like the nuts and dried fruit. I was also a little pleased because I wanted to just eat and eat it. But it did make a lot so I took a little slab of it down to my mum in Geelong to try. I was very glad to have discovered Ricki and Meeta’s blogs when I ate this pudding, especially on Friday night when I got home tired and in need of comfort. It was just what I needed. 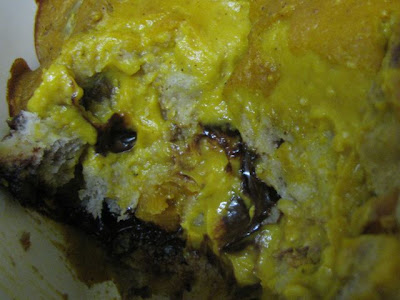 I would not have discovered these blogs without blog events so I want to continue to the sharing. Mansi of Food and Fun Café is holding a recipe contest called A Sweet Celebration, which focuses on sweets and desserts. Her criteria for judging is originality, presentation, serving and measurement details, virtual taste & overall appeal. I didn’t do too well with presentation – as usual – but this pumpkin and chocolate bread pudding is so good that I am sending it to Mansi.

*You can use any bread if you don’t have a fruit bread. Meeta used challah. Ricki used yeast free pumpkin bread. If you want this gluten free you could use gluten free bread and use cornflour instead of oats or GF oats. If you want this vegan, make sure your bread is vegan. If you don’t use fruit bread, I can recommend a handful of walnuts and cranberries in the pumpkin sauce.

Toss pumpkin and oil in a large roasting dish. Roast at 220 C for 30-45 minutes until pumpkin is soft. At this stage you can put pumpkin in fridge for up to 3 days if preparing in advance (or coping with a small baby). NB once pureed, the pumpkin makes about 2 cups.

Using a food processor or a hand held blender puree pumpkin, milk, rolled oats, maple syrup and spices. (I tried this in my 1 litre jug and it was too small so I had to find a bigger container.) Slice the bread thickly and chop into quarters. Roughly chop the chocolate.

While pudding rests, preheat oven to 180 C or 350 F degrees. Bake for about 50 minutes until the top is lightly browned and puffed. Sit for at least 10 minutes before serving. I prefer mine plain but others might like it served with cream or caramel sauce. Leftovers, if you are lucky enough to have any, can be reheated in the microwave.