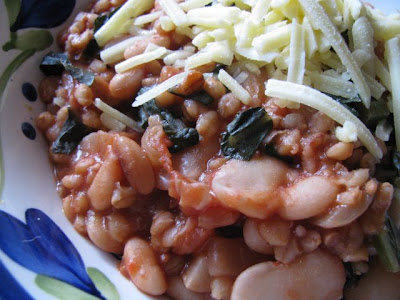 This month’s theme of one of my favourite blog events, No Croutons Required, is the store cupboard. Jacqueline (and Lisa) have challenged us to avoid the temptation of popping out to the shops for food and use whatever is in fridge and pantry to make a vegetarian soup or salad. I was inspired to use up the beans and barley left from the hearty baked beans and chulent I have made lately.

Living, as I do, with the shops only 5 minutes by shank’s pony and needing to get out of the house for a walk each day, I found the idea quite tough. I remember talking to a taxi driver in Darwin last year about his emergency cyclone pack. When I was little and had never seen snow, I thought the idea of being snowed in very romantic. Now the idea of being stuck in the house due to snow (or a nuclear war or deathly pandemic) seems far less desirable. I have images of a cupboard filled with tins of baked beans and no fresh green vegetables in sight. That was what I thought of when Jacqueline set the store cupboard challenge.

I suspect she was referring to a more prosaic problem: our time-poor lives that find us too busy to get to the shops. It is quite a skill to arrive home after a busy day and whip up dinner with what is at hand. I have days when there is so much food that needs to be used, it seems wasteful to buy more and so I make do. 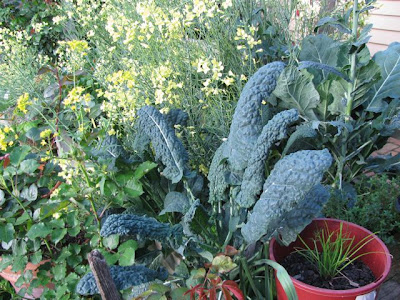 So this week when I found myself too busy to buy food because I was shopping elsewhere, I decided it was time to rise to the challenge. I used only longterm residents of the kitchen and some kale that my mum had picked for me from her garden. (Of course in the event of swine flu keeping us house bound I am not about to nip down to my mum’s place but if it was wartime when we had to rely on kitchen gardens, then just maybe I might!)

I made what was meant to be a soup but is really a stew because it is so thick. Barley just soaks up water like there is no tomorrow. (Definitely not an ingredient to cheer you up in the event of a nuclear holocaust.) I did consider adding more water so it was more soupy but I hope Jacqueline will be gracious host and understand it is a very thick soup that can be much more watery if desired.

I was pleased that without the kale, which was a mere frill, the stew could be made with non-perishables if you used onion powder, garlic powder and stock powder. I had fresh so I used it.

It is also not a meal to whip up quickly because soaking is required. But if, like me, you forget to soak the beans the previous night and you wake up remembering what you meant to do, you can put them in a bowl of water to soak when you first rise in the morning. Mine seemed ok after 4 hours of soaking but I left them for 8 hours as Rose Elliot suggests. 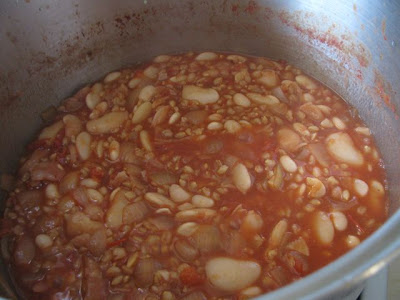 The verdict from E was very positive. Well, he said he liked it much better than the chulent. I thought it very tasty and hearty. I would like to try cooking it slowly in the oven (or, if I had one, in a slow cooker). The first night we had it with some grated cheese but I felt we needed a few more veg so the second night I served it with broccoli and cherry tomatoes. Delicious!

On a more newsy note, I had thought about a special post for my 500th post but I just noticed I have already posted 501 posts. Maybe I will wait til the 600th post! I have also recently joined the new Planet VeGMeL edited by Steph and Danni. I had never heard of planets before but the idea is an interesting one of reading feeds at one url for a collection of blogs, in this instance it is Melbourne vegan blogs. My blog is not vegan but I do like to have vegan food in my diet and to read about other vegan cooking. Check it out at http://planet.vegmel.com/ if you are interested in such things.

Soak the beans for at least 8 hours or overnight. Drain beans, and put in a stockpot with the remaining ingredients, except kale. Bring to the boil and then simmer covered on a very low heat for about 1 hour or until beans and barley are soft. Add more water if necessary. When the stew is cooked turn the heat off. Add the kale, put the lid back on and leave for about 30 minutes to let the kale cook with the heat of the stew. Stir before serving.

On the Stereo:
Embers: Current 93