Chocolate cupcakes with and banana cake revisited for a birthday 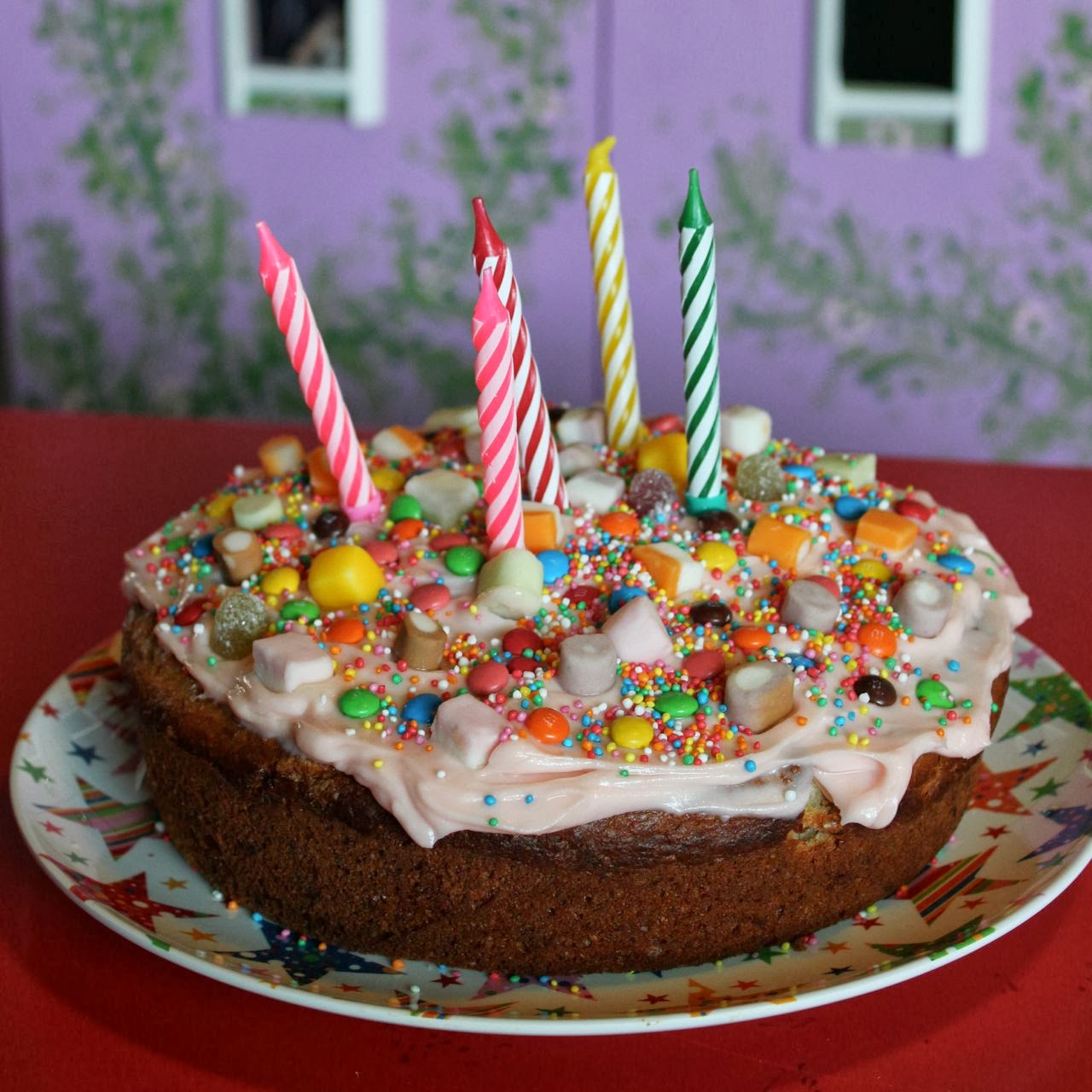 Sylvia's birthday fell on a school day this year.  It meant 3 cakes yet again.  One on her birthday, one at the party and a batch of cupcakes for school.  She was so excited about her birthday this year that there were many plans.  Cake.  Party.  Games.  Party Bags. Etc etc etc.  It will take a few posts to write about her birthday.  Let me start with the cakes for the big day. 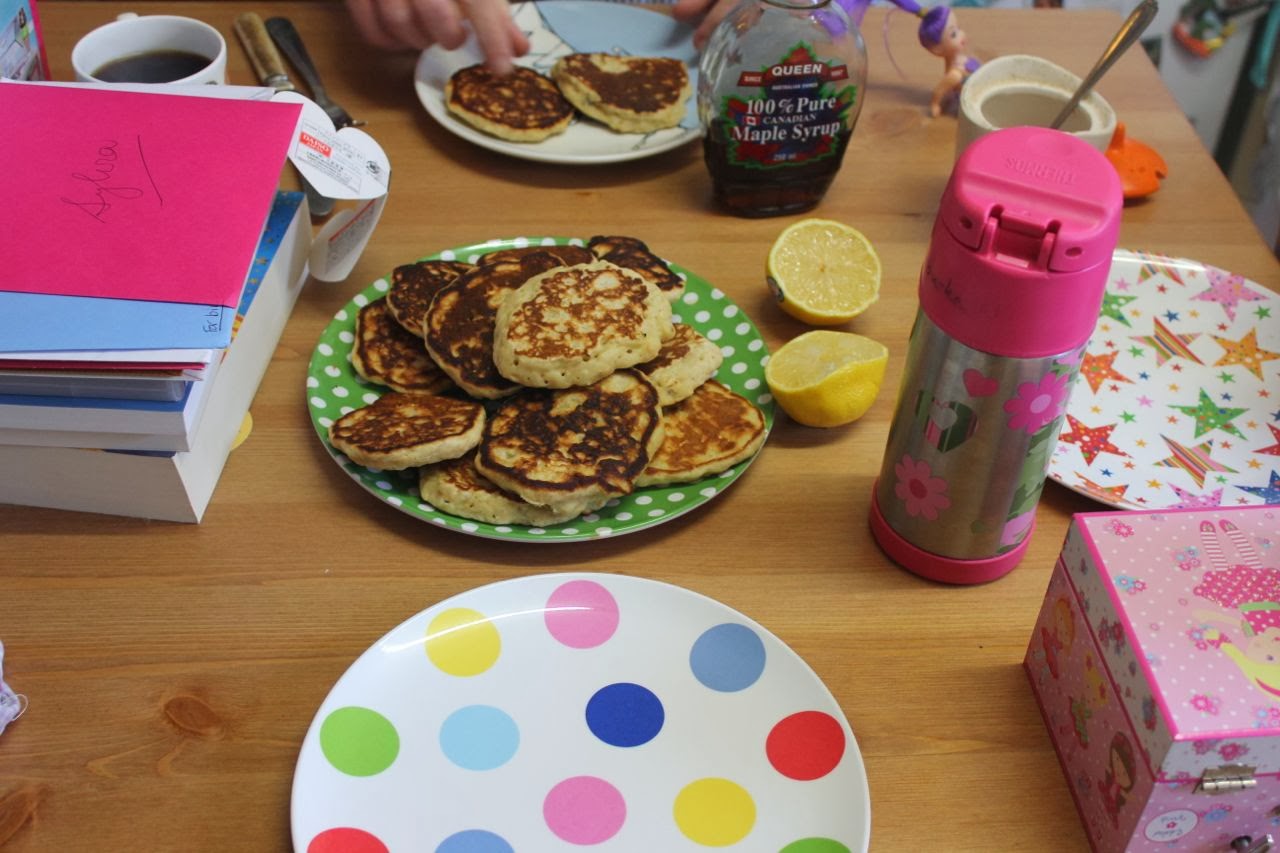 Sylvia's favourite breakfast is banana oat pancakes  so I flipped pancakes while she opened her birthday presents before school.  (We didn't eat them all so I put a few in the freezer.  They make great school lunch box snacks.) 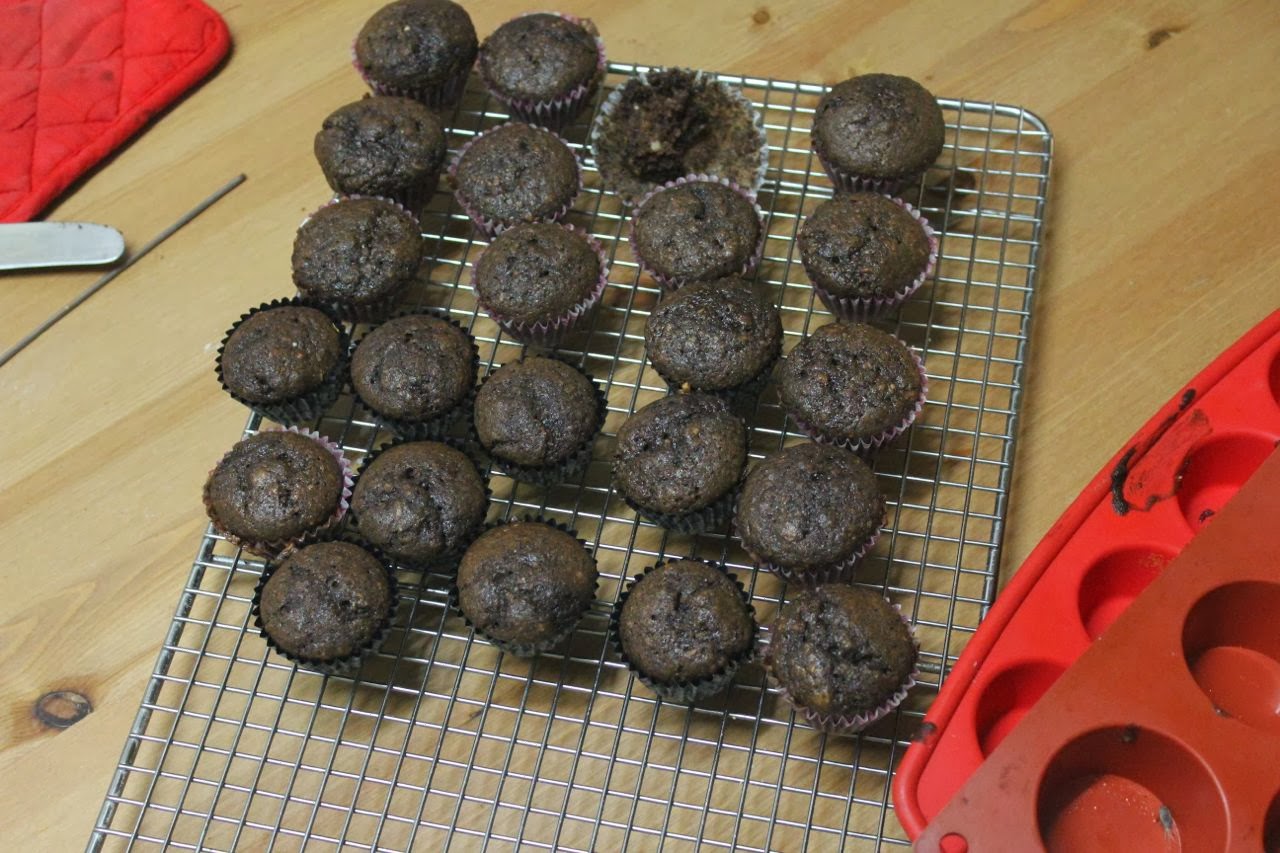 Leading up to Sylvia's birthday, I was a bit confused about whether we take cake to school or not.  We are still getting used to the school routines so I was dealing with other issues in the week leading up to school.  She said she didn't want any cake at school, despite me offering.  Then at 7.30 on the eve of her birthday she decided she did want cake for school.  This meant no time for any fancy food. 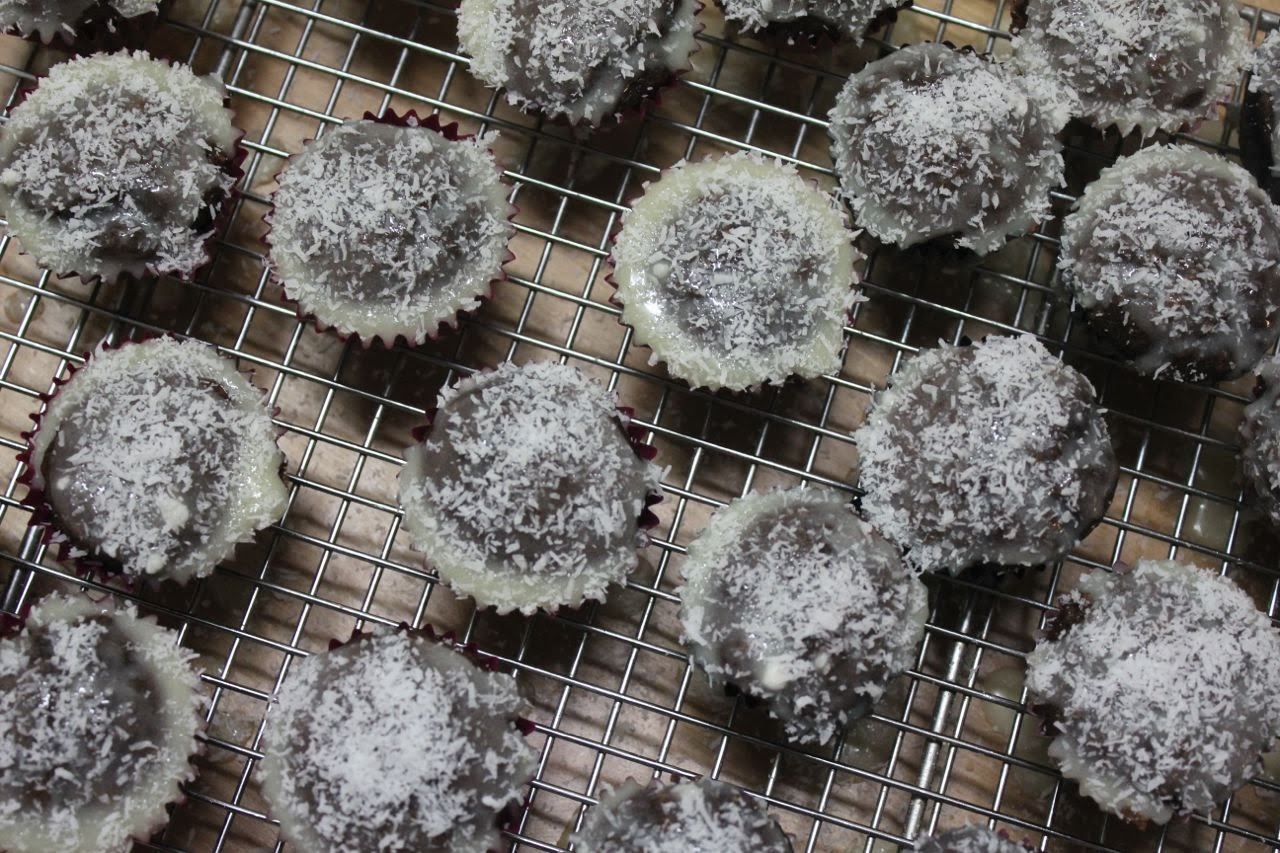 I found a basic chocolate cupcake recipe to make at night and decided to top them with white chocolate frosting and coconut.  It wasn't my finest moment in baking.  I forgot to add the second 1/2 cup of flour.  This didn't matter too much because I was baking in mini muffin cups, that are more likely to dry out.

Then I made a white chocolate frosting that just wouldn't set no matter how long I waited.  I think I spread it on the cupcakes at around midnight.  As you can see in the photos, it was still quite thin.  I regretted not just making a plain old buttercream frosting.  However most of the cupcakes were eaten at school and we were quite happy to devour the leftovers. 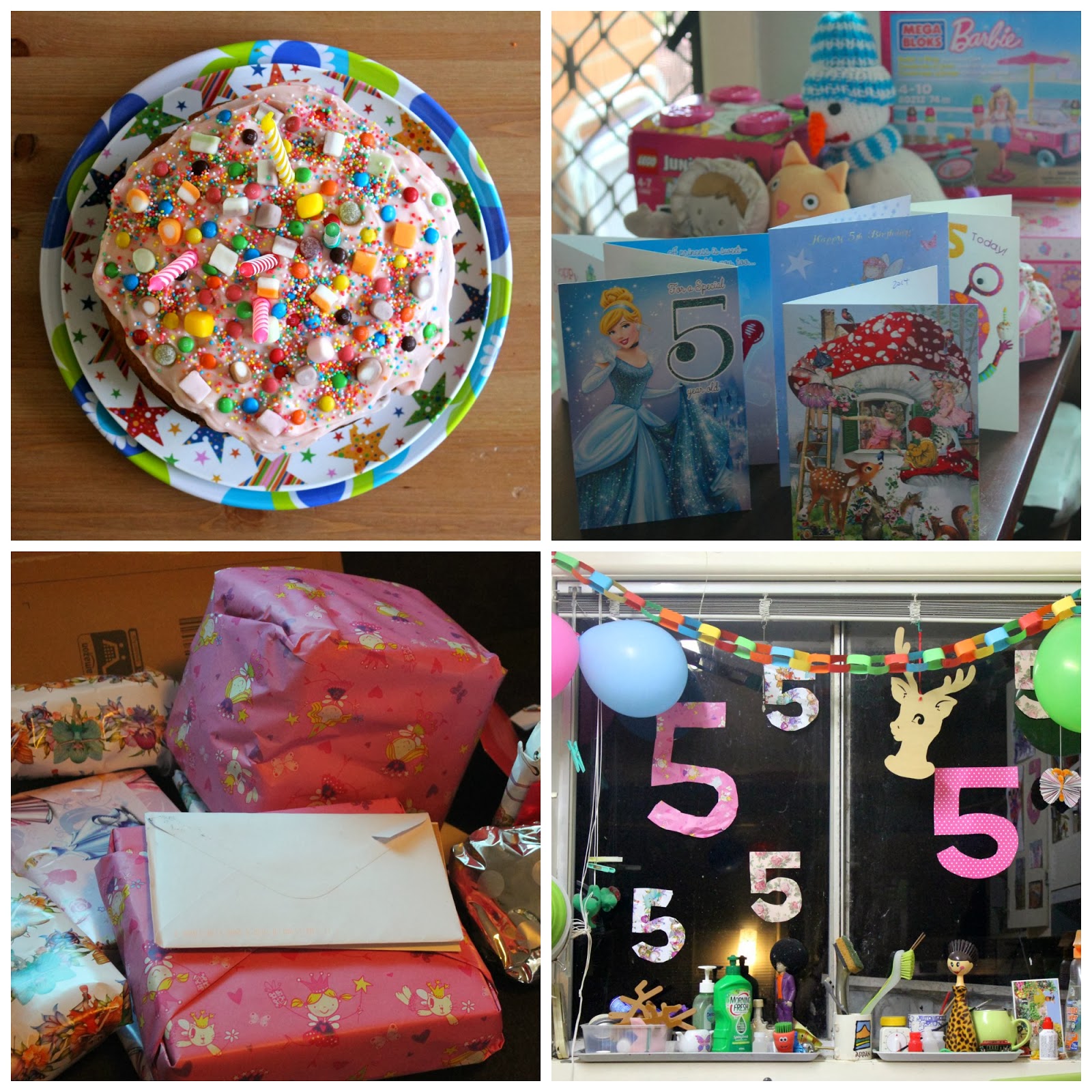 For her birthday cake Sylvia chose banana so I returned to a banana berry yoghurt cake that she had for her second birthday.  Instead of berry yoghurt I used vanilla yoghurt.  The cake was delicious and rather stodgy (even with some extra milk).  I loved the pale pink cream cheese frosting with a little lemon juice to reduce the sweetness.

Sylvia was more interested in decorating the cake with lollies - rather than the berries she had when younger.  We bought a dolly mix and m&ms.  I thought it looked great.  Sylvia insisted on adding sprinkles. She loves a bit of colour.  Hence the balloons and fives (cut out of wrapping paper as inspired by my brother in law) that decorated the kitchen. 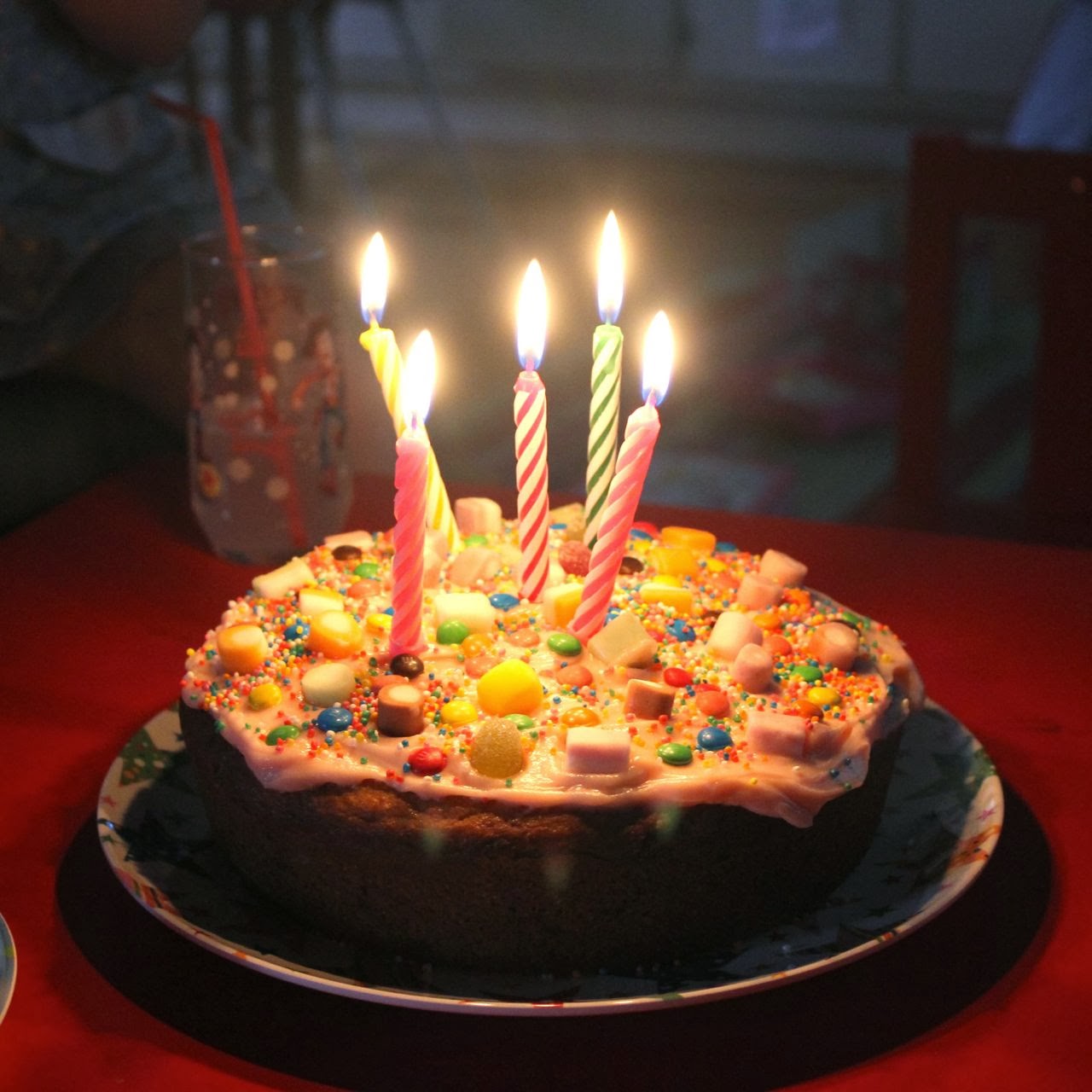 Once the lights are dimmed and the candles lit, any birthday cake looks beautiful.  This one was no exception.  The lollies and sprinkles sparkled like jewels.  Sylvia was delighted.  She wasn't keen on us singing happy birthday but she loved blowing out the candles.

I am sending the lolly covered cake to Jane of the Hedgecombers who is co-host of Tea Time Treats with Karen of Lavender and Lovage.  This month the theme is decorated cakes.  Stay tuned for the birthday pizza and toadstool birthday cake.

Bake for 15 minutes or until cooked (when a skewer inserted into the middle comes out cleanly). Cool on a wire rack. Ice with white chocolate frosting and sprinkle with coconut.

Melt chocolate and butter in a small bowl in the microwave (or in a small saucepan on the stovetop).  Set aside.  Stir together the milk and icing sugar.  Mix in the chocolate butter mixture and let cool until it is spreading consistency.  I put mine in the freezer to cool it quickly.  The recipe suggests 30 minutes cooling time but even with the freezer mine took far longer to be spreadable.

Cream butter and sugar. Add egg and mix well. Add yoghurt, milk and bananas and mix. Gently mix in flours until combined. Tip into a lined and greased 20cm round cake tin. Bake at 180 C for about 1 hour. Cool on a wire rack.

To make frosting, mix cream cheese, icing sugar butter, lemon juice and food due. Spread over the top of the cooled cake and scatter with lollies.

On the Stereo:
The Little Mermaid: 28 all time favourite songs, stories and nursery rhymes
Posted by Johanna GGG at 13:50