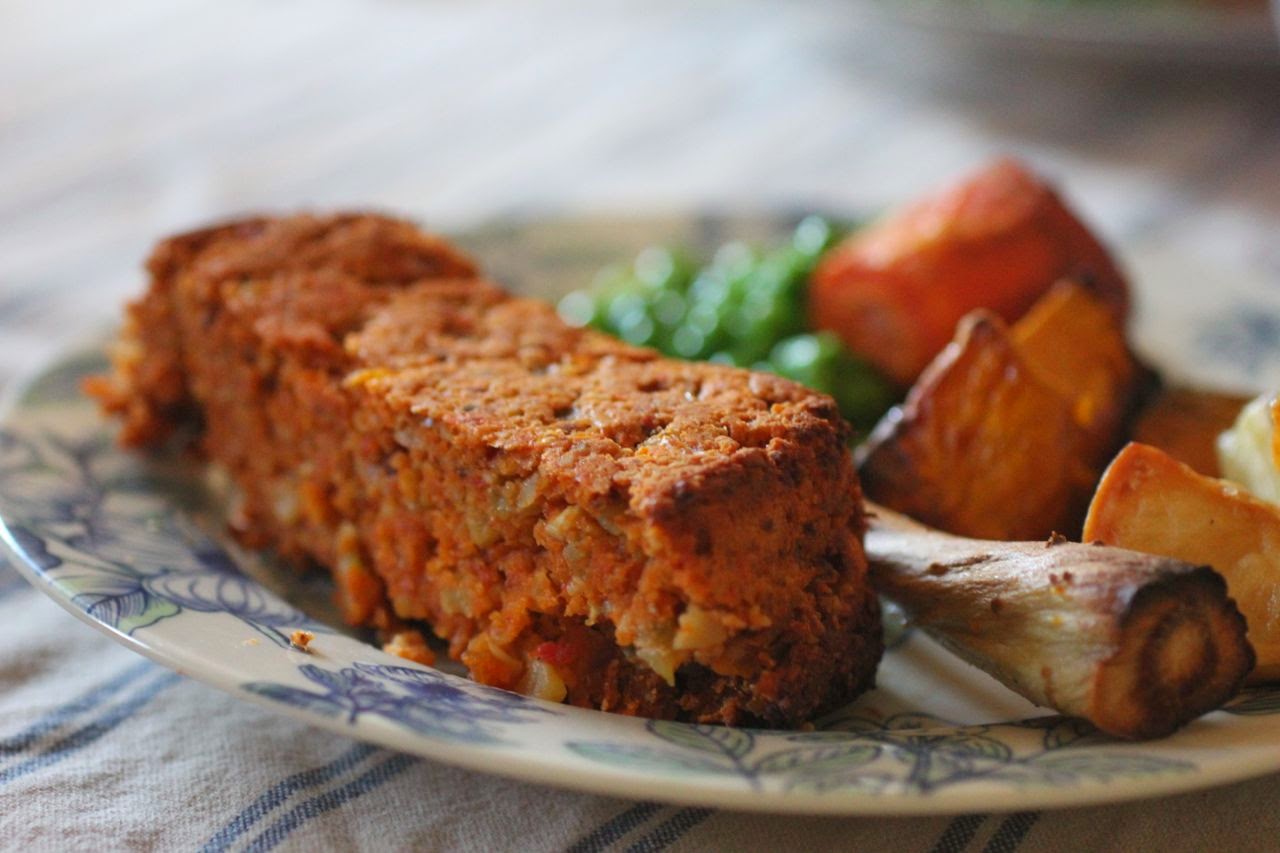 So it has been a busy week.  Two birthday celebrations, a sleepover and a concert.  Not to mention meetings, bank queues and getting caught in the rain.  And there was nut roast.  While not the simplest of dishes, it is one of my easiest.  I make nut roasts so regularly that it is no effort at all to whip one up. 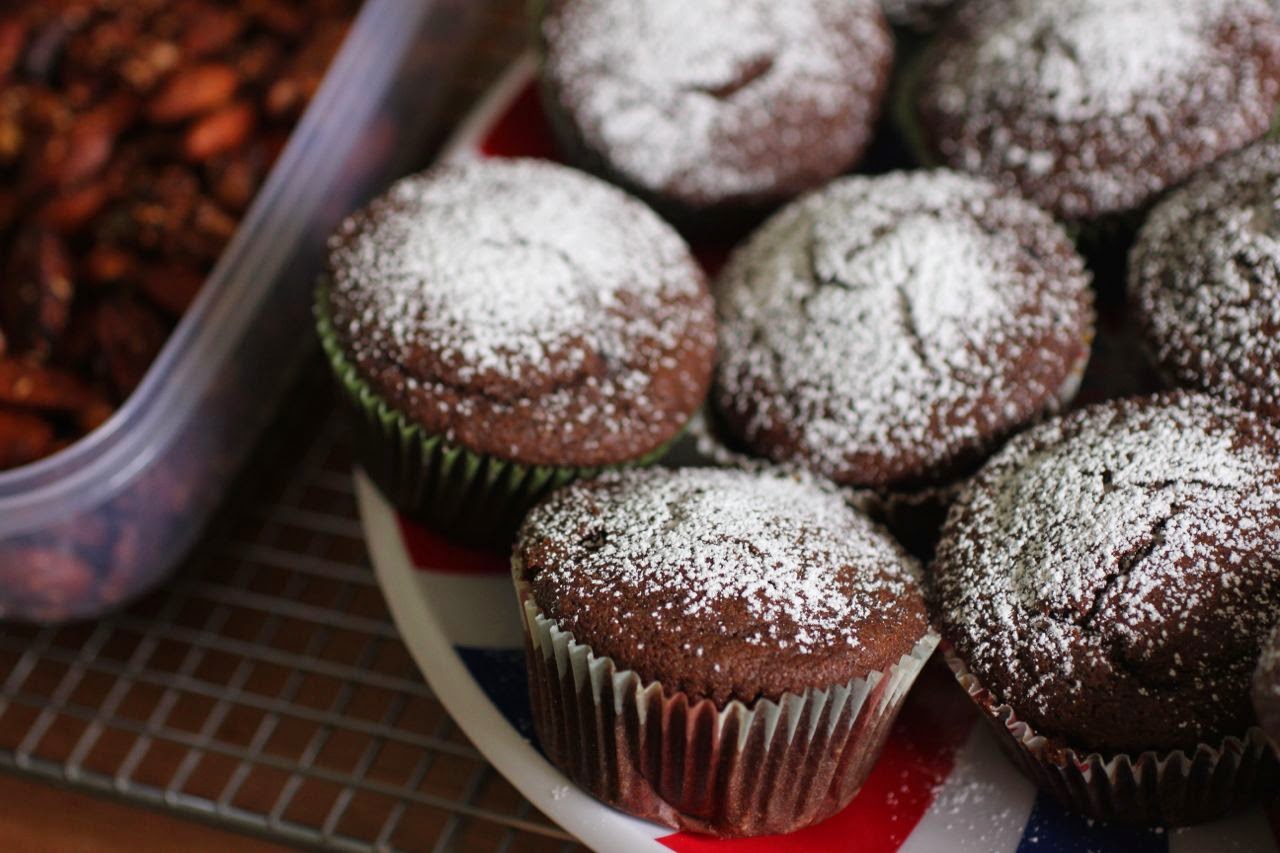 But firstly let's start with the weekend.  On Saturday I went to Coburg Farmers Market for the first apples of the season.  I made smoky nuts and a batch of chocolate muffins from Ricki Heller's Naturally Sweet and Gluten Free.  They were for a Moody Noodles birthday celebration.  The nuts were a bit burnt and the cupcakes slightly crumbly but it was great to catch up with familiar faces (and some new ones too).  I loved K's cashew cheese with roasted garlic and smoked paprika from Veganissimo.  (Now I really want to buy the book!)  Plus there was a pretty cake and a cute baby. 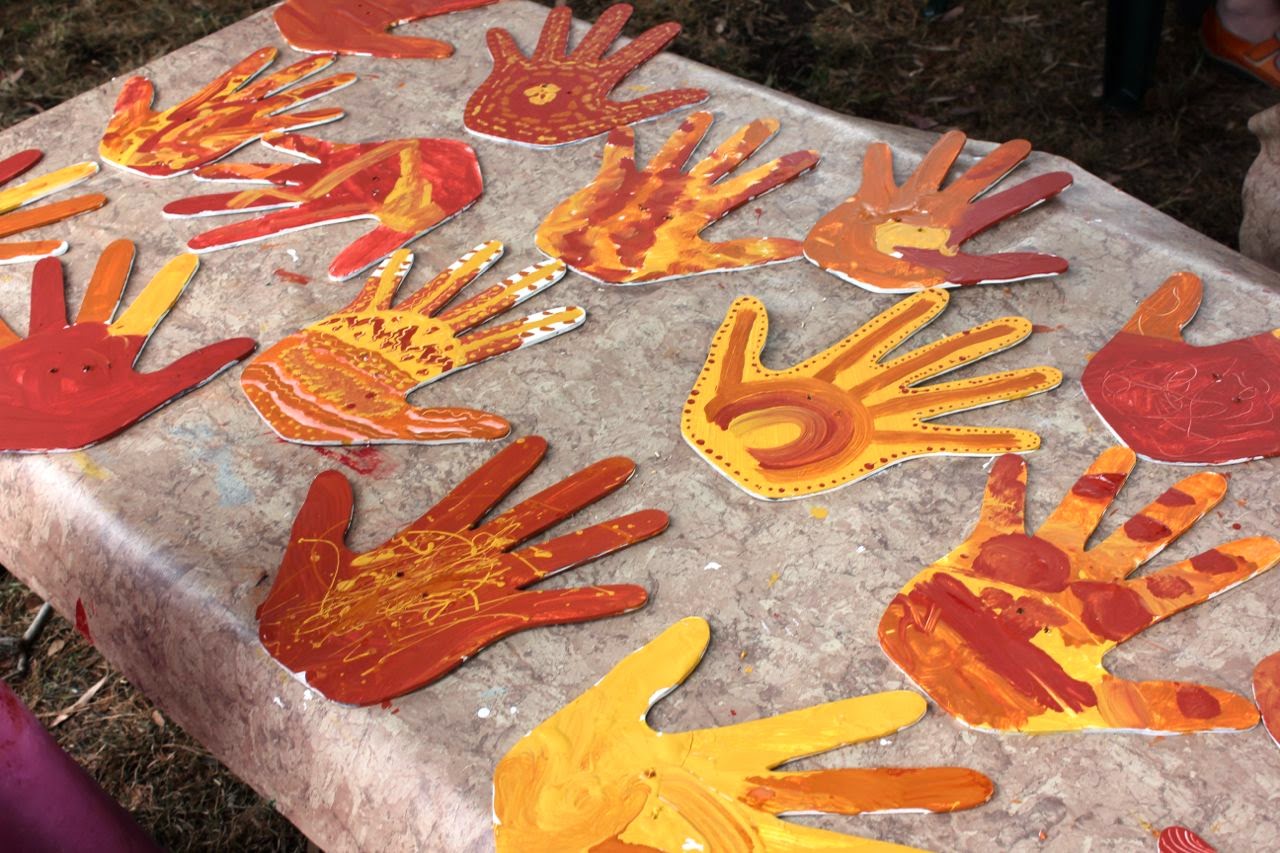 Sunday we went to a community concert in the park.  I was one of the volunteers and had a very long day from set up, though all the music, to pack up and dinner at the pub.  Despite the cancellation of one of the headline acts, it was a great afternoon and made me happy to live in my neighbourhood.

I particularly loved the art tent where kids could paint a hand with Aboriginal colours.  I coaxed Sylvia to paint a hand and was rewarded with paint stains on her princess dress that did not come out in the wash!  Apparently the painted hands will be on display around Moreland.

During the week we made the most of Sylvia's last few school-free Wednesdays (which come to an end when Term 1 finishes up next week) and had a sleepover at my parents' place in Geelong.  We had a birthday dinner for my brother.  I made a nut roast to contribute to mum's roast dinner.  (I know it looks like a bone on my plate in the top photo but it is roasted parsnip).

My sister in law made the gf chocolate cake.  It was delicious and my sort of thing.  Sylvia was excited about the pavolva.  I also took down the chocolate bark with coconut bacon which got mixed reactions. 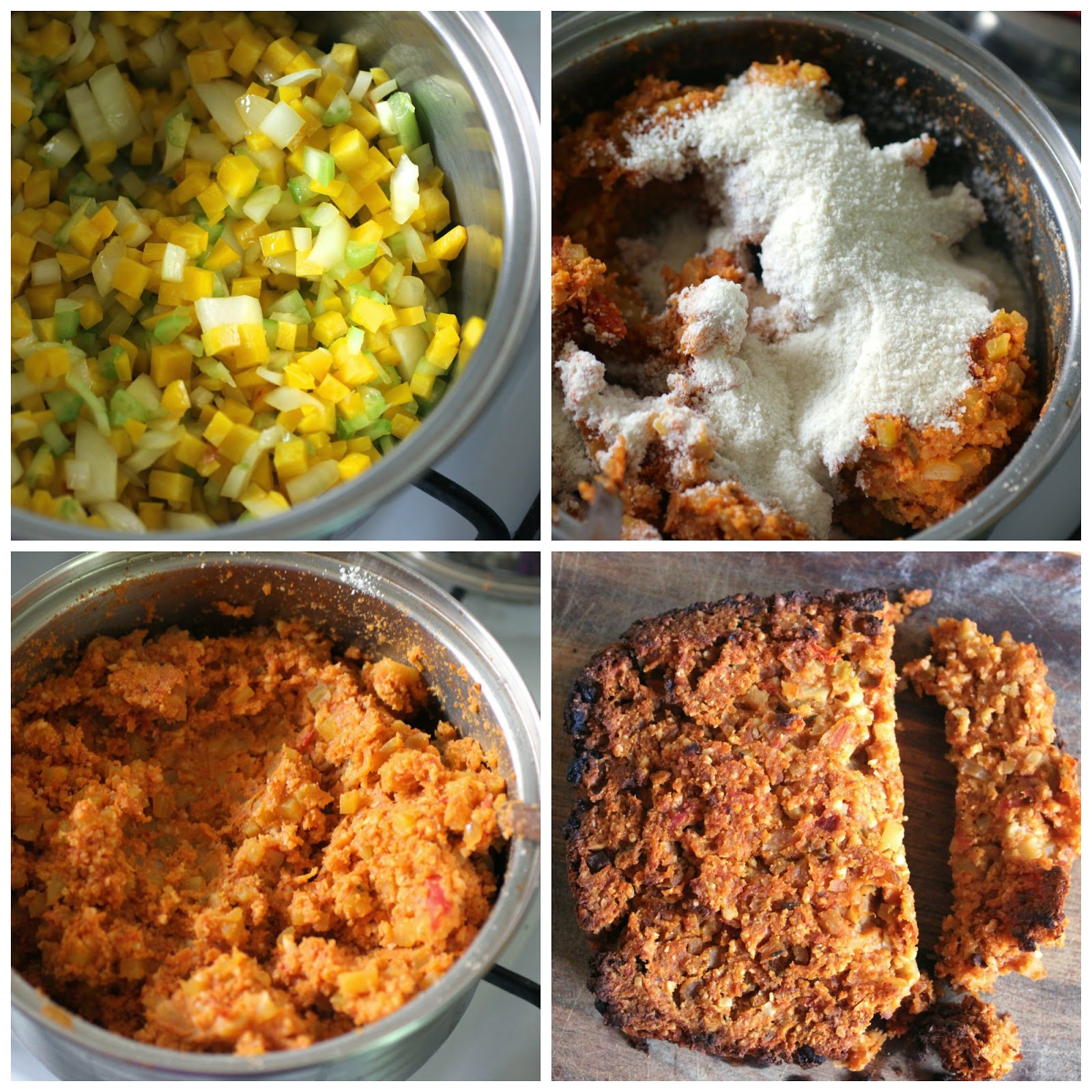 The nut roast inspiration came from Sam Stern's Eat Vegetarian.  It was his 'classic' nut roast with a tomato sauce that is mixed in with almond meal, breadcrumbs and chestnuts.  I had golden beetroot from the farmers market, I had a gluten free mixture of crumbs (including gomasio, besan and coconut flour), a packet of rice crumbs that has been spilling in my freezer for too long and no chestnuts within cooee.  I used cashews instead of chestnuts and made do.

The nut roast was a success.  It was on the sweet side and quite day-glo orange.  But delicious.  It was gluten free but regular wheat breadcrumbs could be used.  It only had one egg so I think you could substitute a flax egg or chia seed egg to make it vegan. 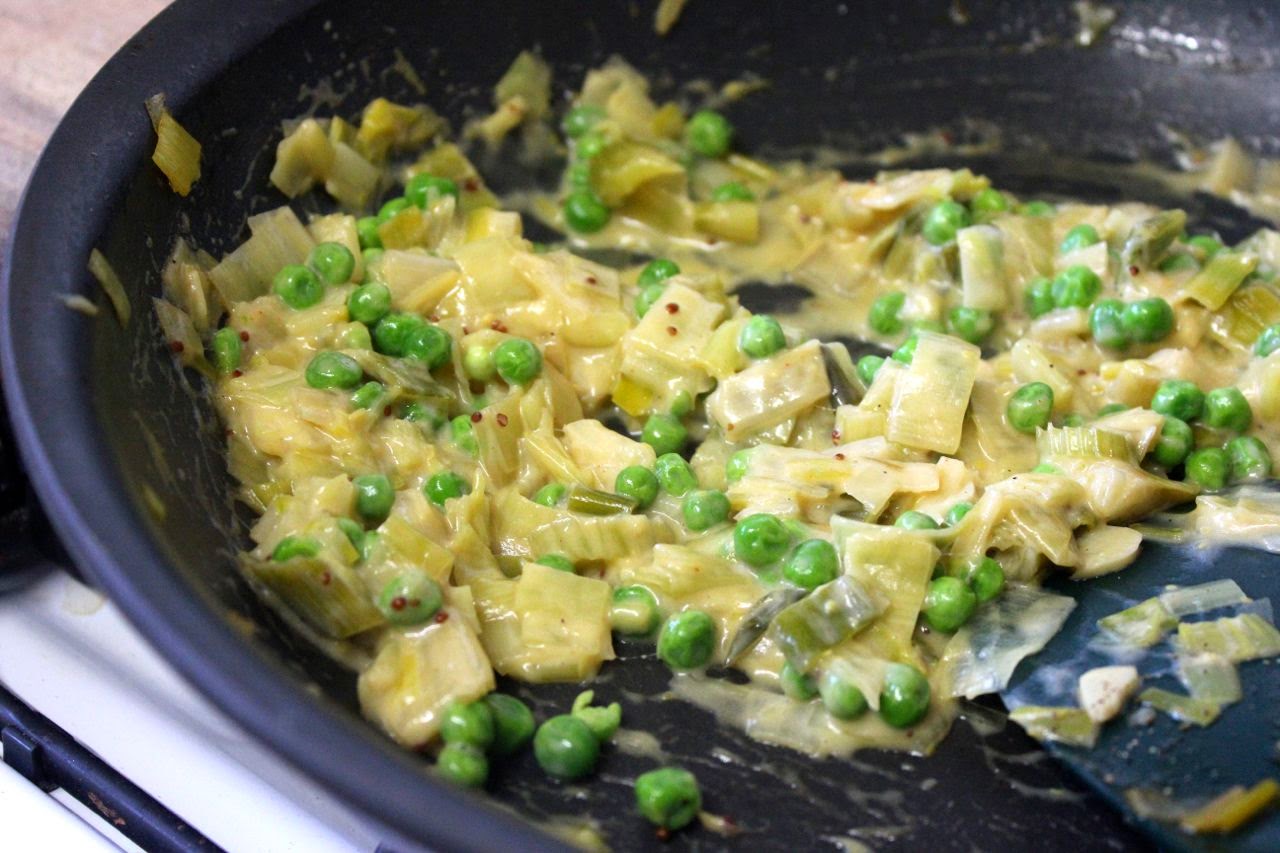 Tonight I made a roast dinner to use up the rest of the nut roast.  When I was organising myself to make gravy I found I was out of onions.  What self-respecting kitchen doesn't have onions!  (Ok, I know some people don't have onions in their diet!)  At least I had a huge leek from the farmers market.

I took my inspiration from Jamie Oliver and made Creamy Leeks and Peas.  I cooked the leeks until soft (about 10 minutes uncovered and 30 minutes covered) on the stovetop with sliced celery, sliced garlic, a dash of smoked paprika and a pinch of salt.  (I put some of these aside for another day.)  Then I added some milk, parmesan cheese, cheddar cheese and seeded mustard.  Mixed it up and added some peas.  It was a great side dish. 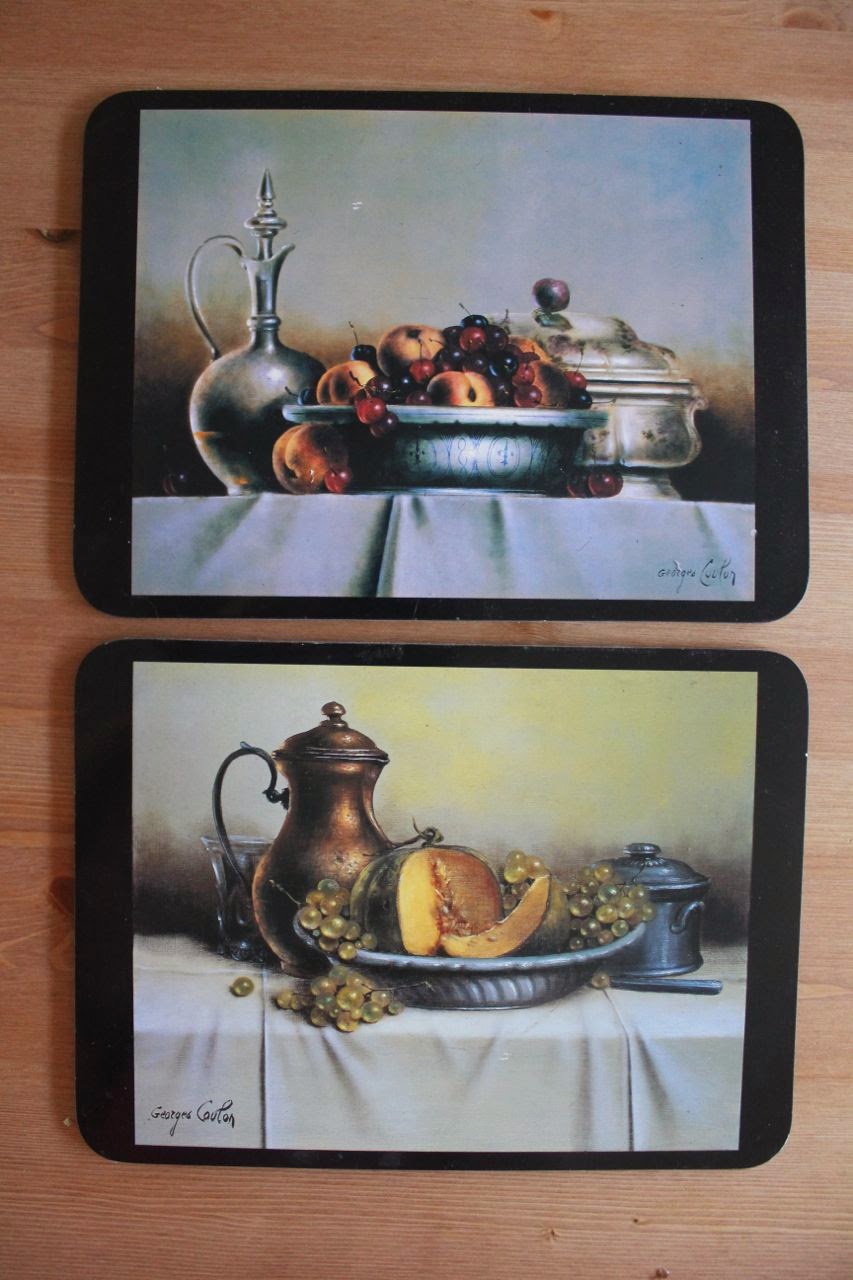 I made the creamy leeks while I roasted the vegies.  I sliced the potatoes into chips.  Sylvia loved them so much last time I made them and my mum had already made her proper roast potatoes this week.  I also roasted some pumpkin.  I even heated the dinner plates as my mum used to do.  Hence my use of place mats.  They haven't been used for some time.  I do love the pictures on them so here is a gratuitous photo. 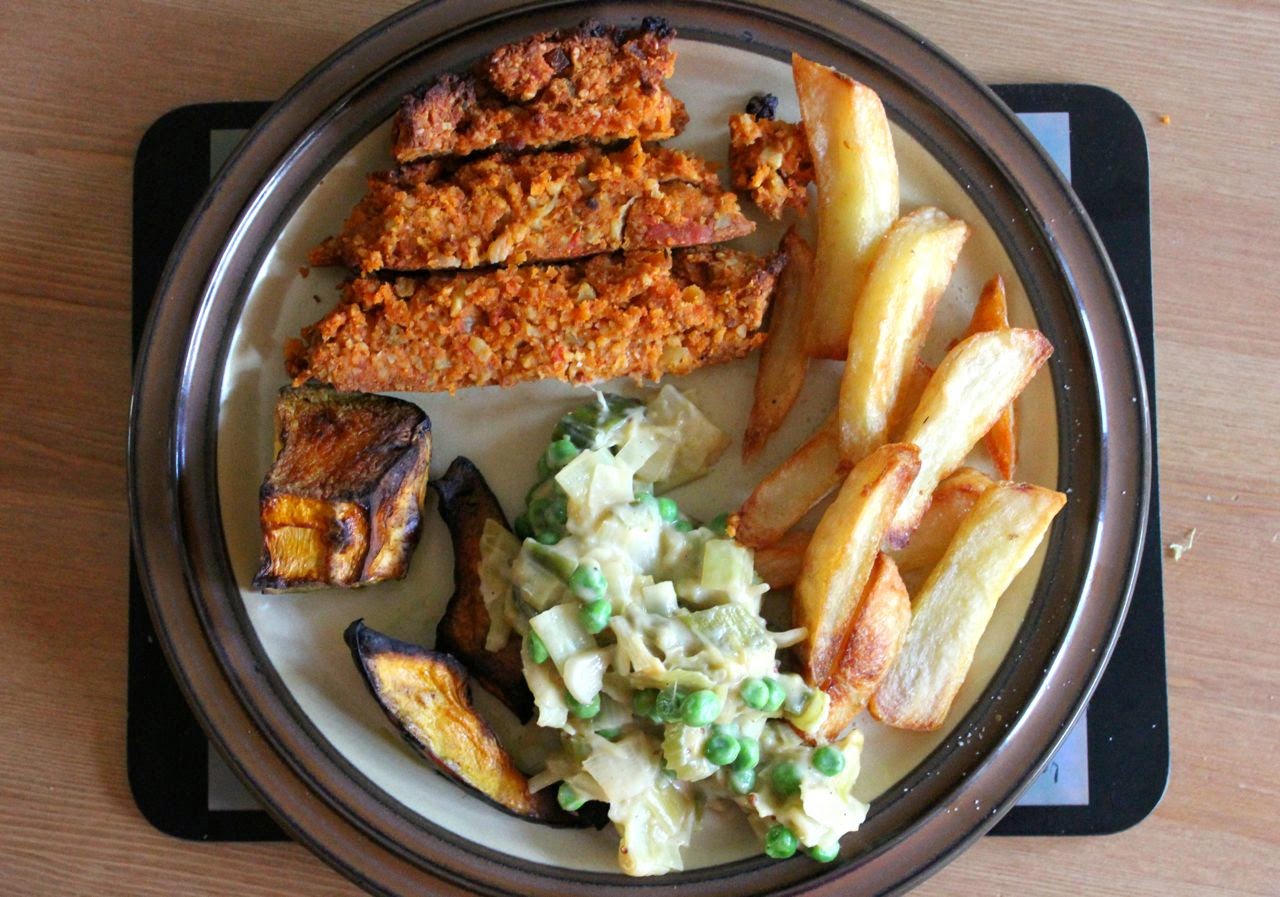 The roast dinner was comforting, creamy and crispy.  Sylvia ate a decent chunk of nut roast (drowned in tomato sauce) and then told me it was disgusting.  The chips were golden and crisp.  The pumpkin was charred around the edges like it should be when the skin is left on.  The creamy leeks and peas were an unusual addition to the roast dinner.  They went very nicely with the tomato and beetroot flavoured nut roast.  Every busy week needs an ending like this.

As this meal features golden beetroot and a huge leek from the farmers market I am linking up with Shop Local #7 at Elizabeth's Kitchen Diary, an event for bloggers to feature locally sourced food.

Make tomato sauce:  Heat olive oil in a medium saucepan over medium heat.  Fry onions, beetroot and celery for about 5 minutes or until onion is translucent.  Stir in the garlic and fry about a minute.  Add tomatoes, maple syrup and sea salt.  Bring to boil, cover and simmer for about 20 minutes.  The sauce should be thick and the beetroot will be soft when cooked.

While tomato sauce cooks, prepare the rest of the ingredients.  When the tomato sauce is ready mix with remaining ingredients - I did this in the saucepan but you could do it in a mixing bowl if you prefer.  It will be quite a thick mixture.  Tip ingredients into prepared tin and smooth the top with the back of a spoon.  Bake for 50 minutes.  If the top starts to brown too much cover with foil (mine was uncovered).  Let stand for 15 to 30 minutes before turning out and slicing.  Leftovers can be wrapped in foil in the fridge and reheated in the oven

* NOTES: You could use some precooked tomato sauce with vegies of choice, though it should be quite thick so you might need to boil it down.  For the breadcrumbs and rice crumbs you can substitute other grains or flours.  I used a mixture of coconut flour, besan, gomasio and rice crumbs.  You could also substitute a flax egg or chia seed egg for the egg (about 1 tbsp ground seeds with 3 tbsp water) to make it vegan.  As with all nut roasts, the possibilities for substitutions are endless.

On the stereo:
Super Trouper: ABBA
Posted by Johanna GGG at 12:10