Haloumi, peach and pepper salad for a long weekend 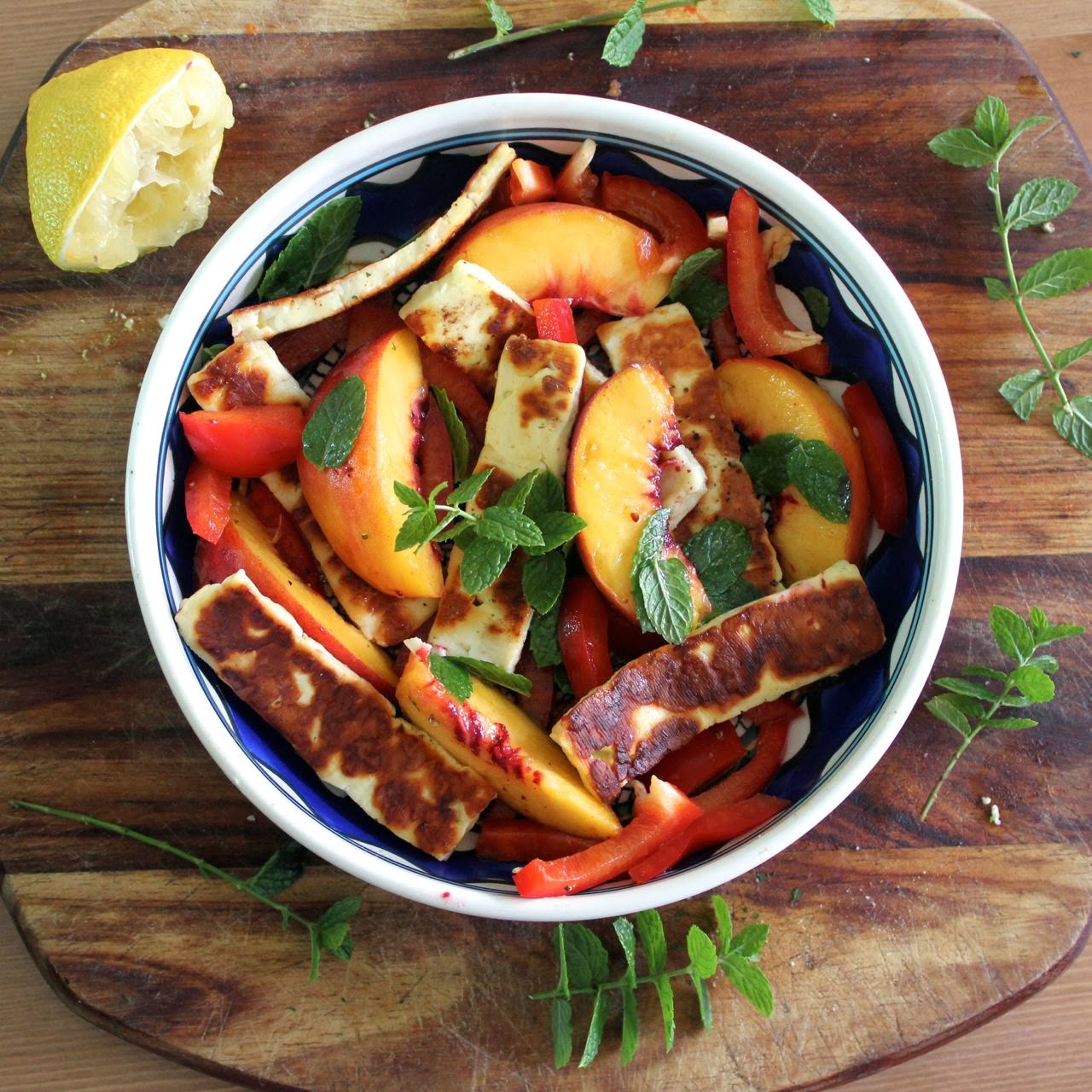 We have just enjoyed the Labour Day long weekend.  It was filled with outdoor ballet at the Sidney Myer Music Bowl, a ukelele festival, a children's party and a visit to the pool.  There wasn't a lot of energy leftover so we mostly ate light easy meals.  Like this excellent haloumi peach and pepper salad I found on The Kitchen Maid. 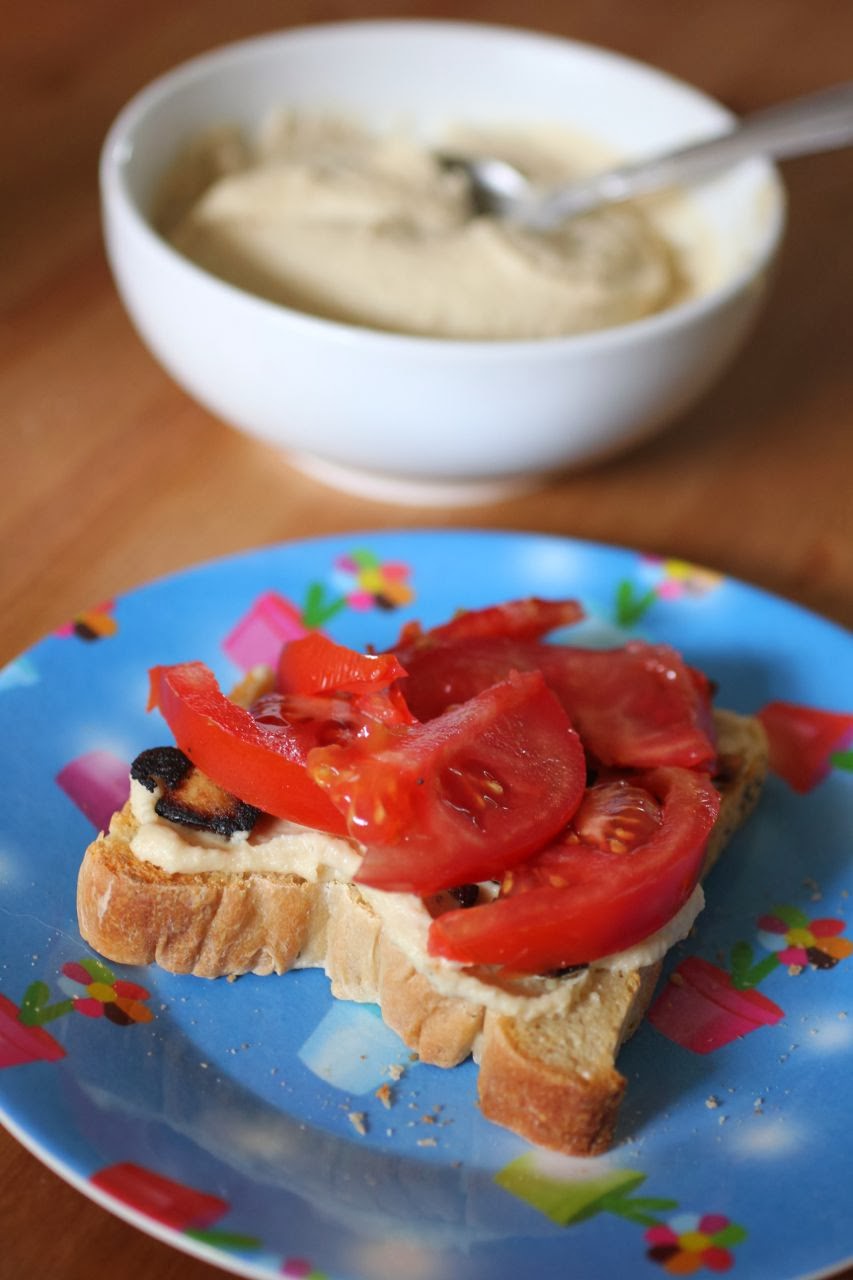 Firstly here are a few other meals.  I made a Tangy Cashew Cheese as part of my recipe testing for Ricki Heller.  It was amazing with tofu bacon and tomato on sourdough toast. 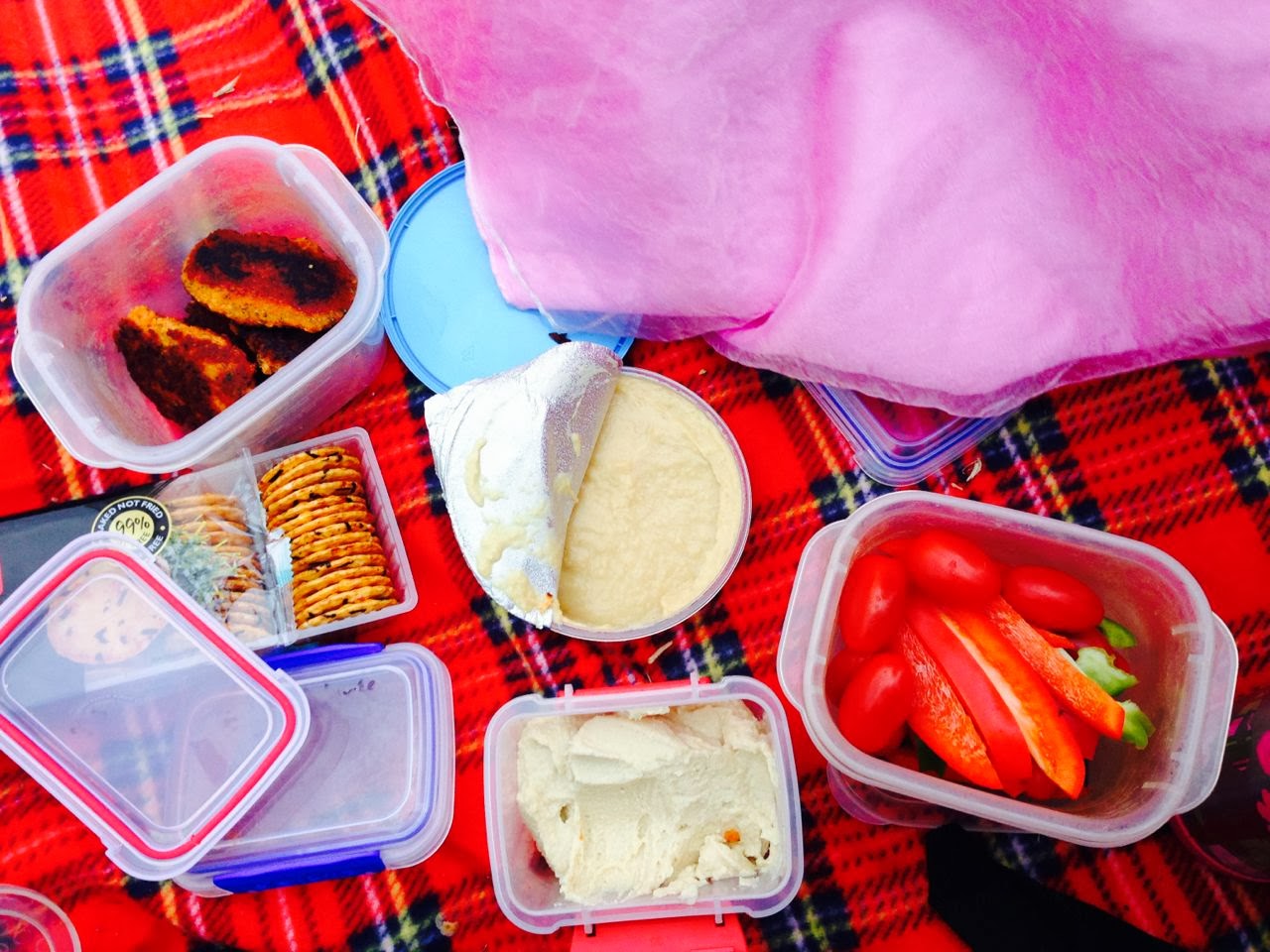 I took some cashew cheese along to our picnic before the ballerinas floated on stage in their tutus. We also had tofu bacon, hummus, rice crackers, vegie sticks and lentil koftas.  I also made some hedgehog and chopped up some plums and watermelon for dessert.  It was a coolish night but picnics and performances at the Myer Music Bowl are always fun.  Even if Sylvia sometimes seemed to enjoy the bats overhead more than the ballet on stage.

Then continuing with recipe testing, I tried some broccoli lemon pesto.  It went onto one of the odder pizzas I have made.  It was a plain old cheese and tomato sauce pizza but the toppings had gone a little dry.  I also put some pink food dye in the dough for fun.  I had put it in the freezer last week.  On the weekend I defrosted it, heated it up on a frypan, added cashew cheese, the pesto, chopped lentil koftas and fried cherry tomatoes.  Not at all traditional but I enjoyed it. 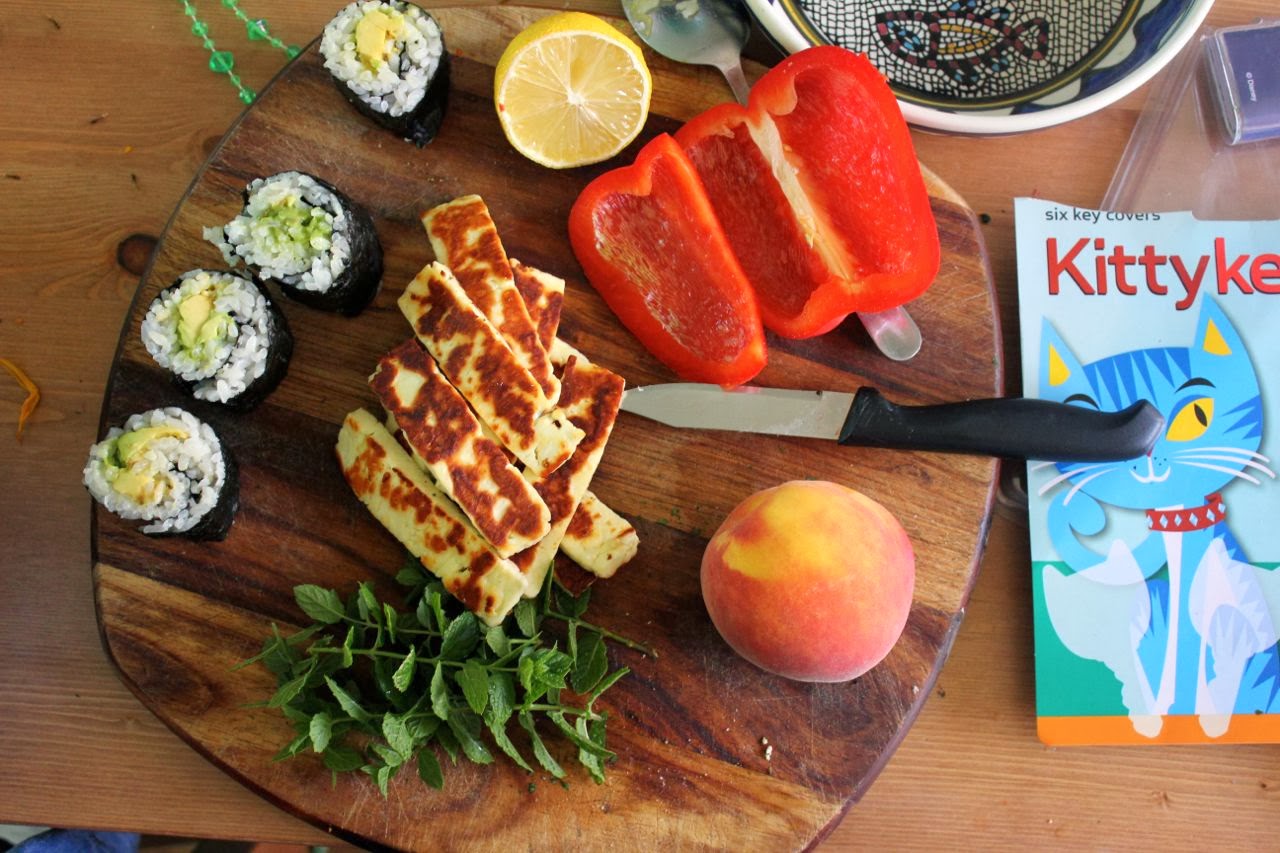 On one lunchtime I made sushi for Sylvia.  I included some avocado in a few for me.  I had bought some haloumi especially for The Kitchen Maid's salad.  It had appealed to me because I love peaches and red capsicum (or peppers), I need encouragement to eat more haloumi and the mint in my garden is often neglected. 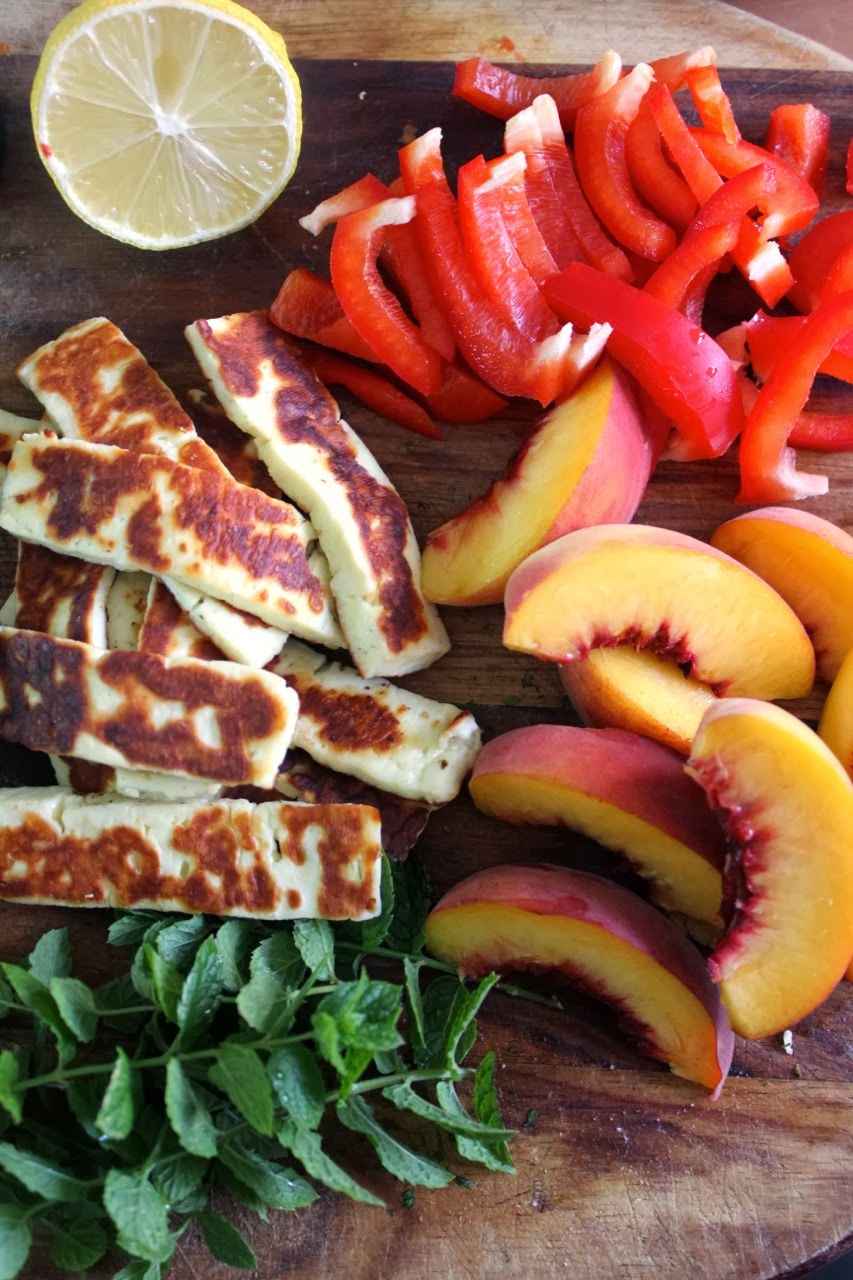 It was a doddle to fry it up and chop some vegies.  I think I was a bit heavy handed with the lemon.  It was quite sharp on the peaches but they were perfectly juicy and just right with the salty squeaky haloumi.  Peaches in salad isn't E's sort of thing but he didn't mind.  He was mostly preoccupied with the ukelele festival. 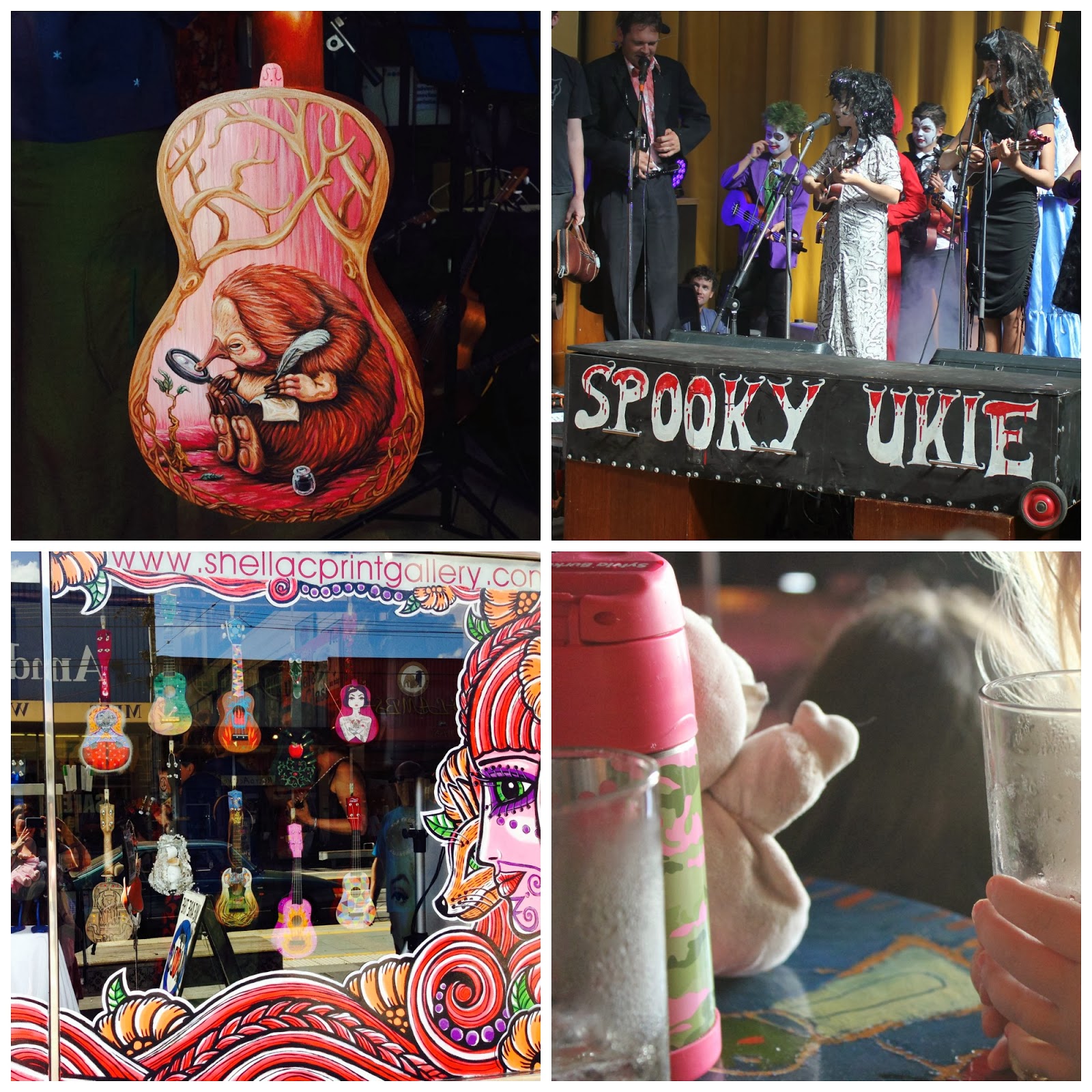 Sylvia and I didn't have much energy or time for the ukelele festival this year but we did pay a visit and see Northcote High Street filled with people wandering about with ukeleles.  It is a great atmosphere.  We enjoyed seeing E play and checking out the ukelele art. 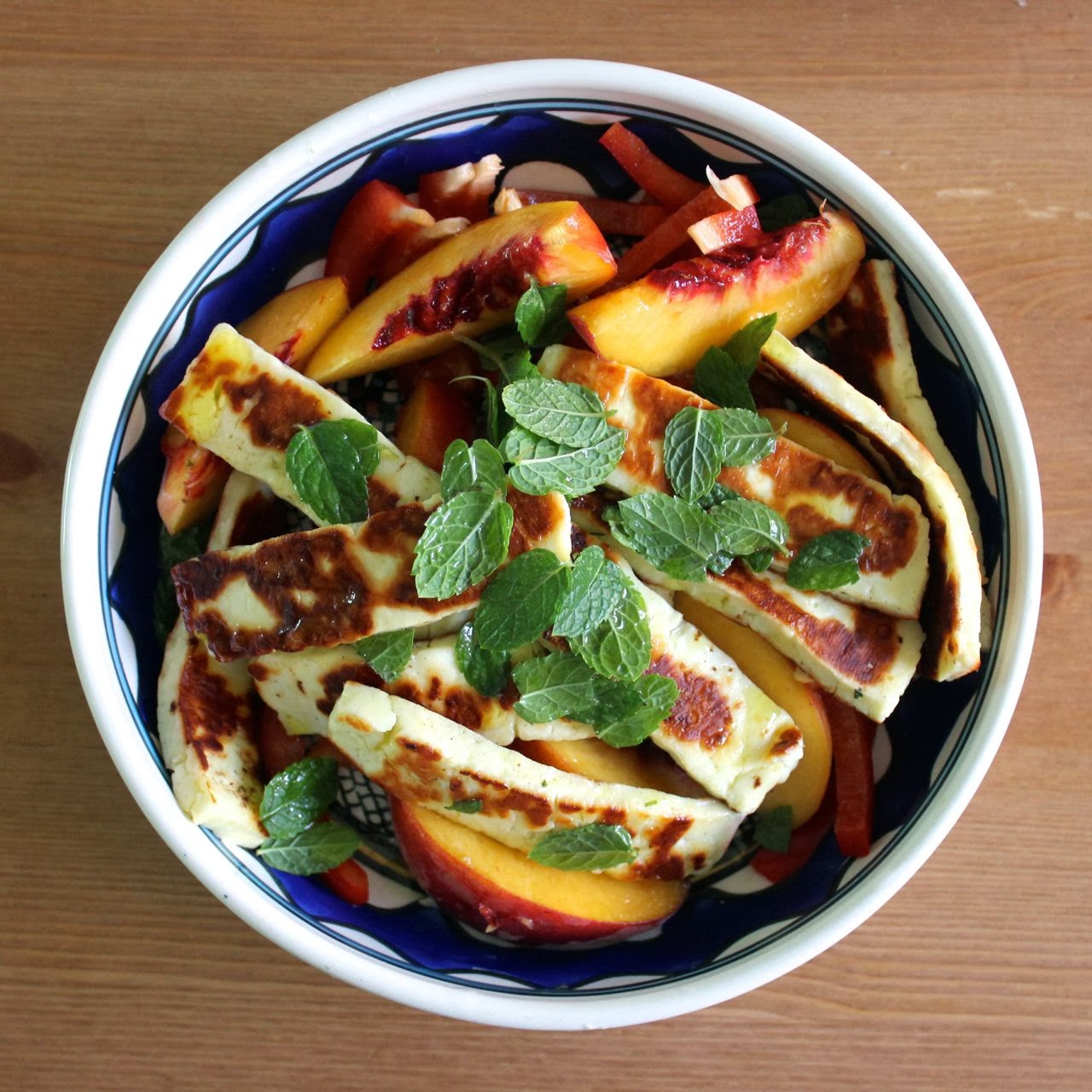 There was another reason that I was glad the salad made for a great quick lunch.  Just after lunch I needed my energy when Sylvia experimented with putting a coin in the CD player.  There was much gnashing of teeth and poking about in the player.  We have been finding alternative ways of playing CDs the last few days but E finally couldn't bear it today and after more fiddly work, he has got it working again.  Hurrah!

I am sending this salad to Jacqueline's Bookmarked Recipes event.

Fry the haloumi on a non-stick frypan until it is golden brown on each side.  Cool slightly and toss with remaining ingredients.

On the stereo:
This is Hardcore: Pulp
Posted by Johanna GGG at 20:50