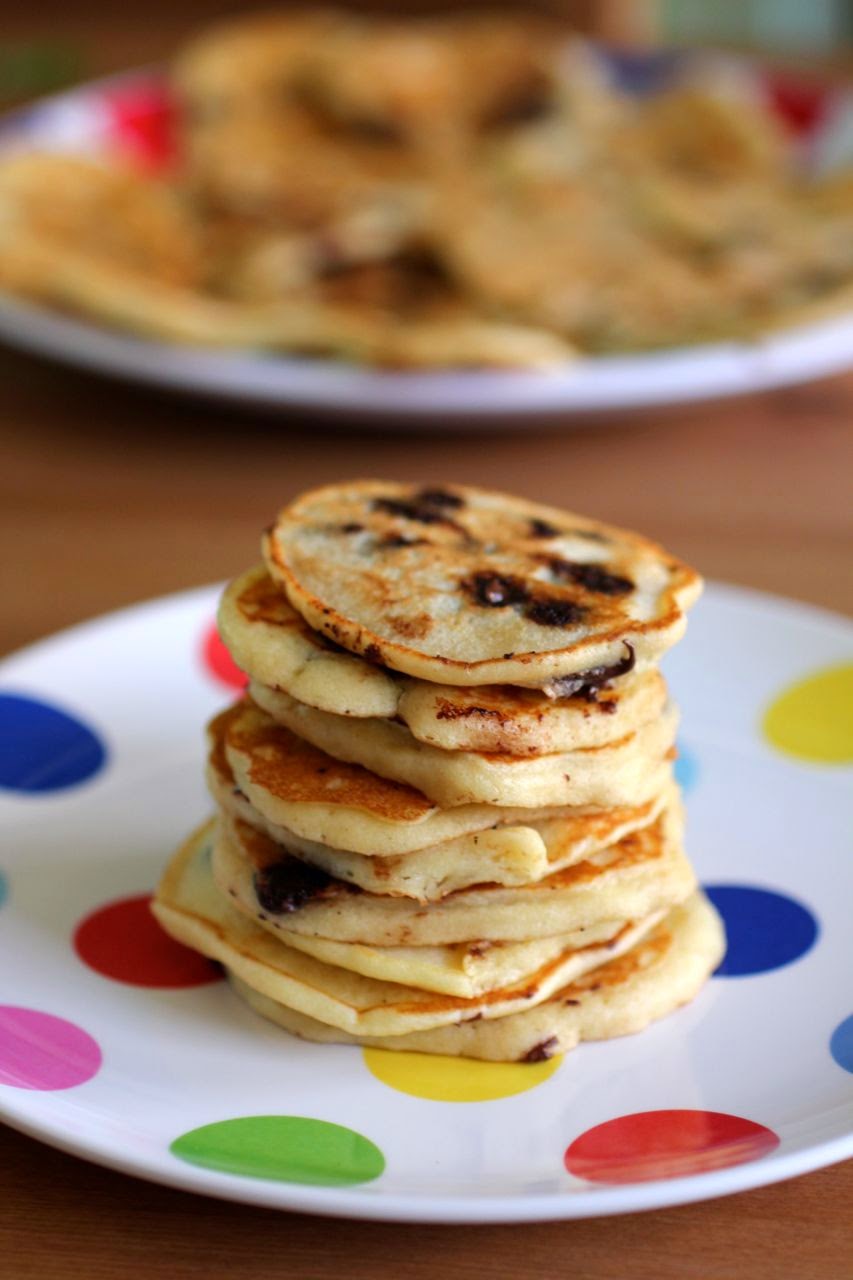 I might have been bang on time with St Patrick's Day this year.  For the disorganised among you, take heart.  I was late with St Valentines Day and today am even later with Shrove Tuesday.  They are not even proper pancakes.  These pikelets are as close as I got.  While I had wild dreams about creamy vegetables wrapped in thin pancakes or rich chocolate pancakes with caramel and pecan sauce, these humble pikelets are more my sort of thing.  I added choc chips because everything tastes better with chocolate.  I think! 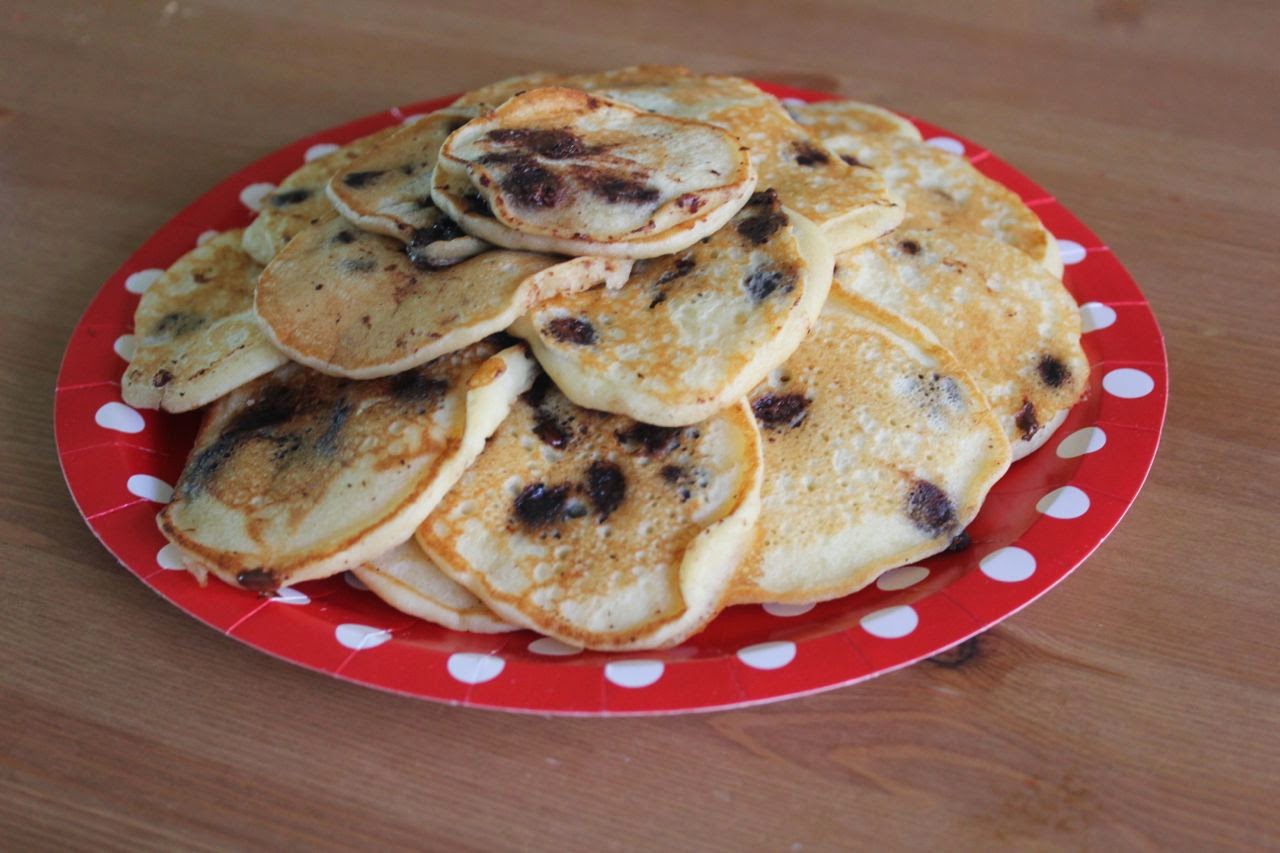 In fact I made them twice.  The first batch came from Coles supermarket and were yummy but much thinner than traditional pikelets.  (Yes they are as thin as the ones on sale in the supermarkets but they don't really know about tradition, do they?)  Later when I looked at the recipe I found that it had quite a bit of melted butter unlike my favourite pikelets recipe. 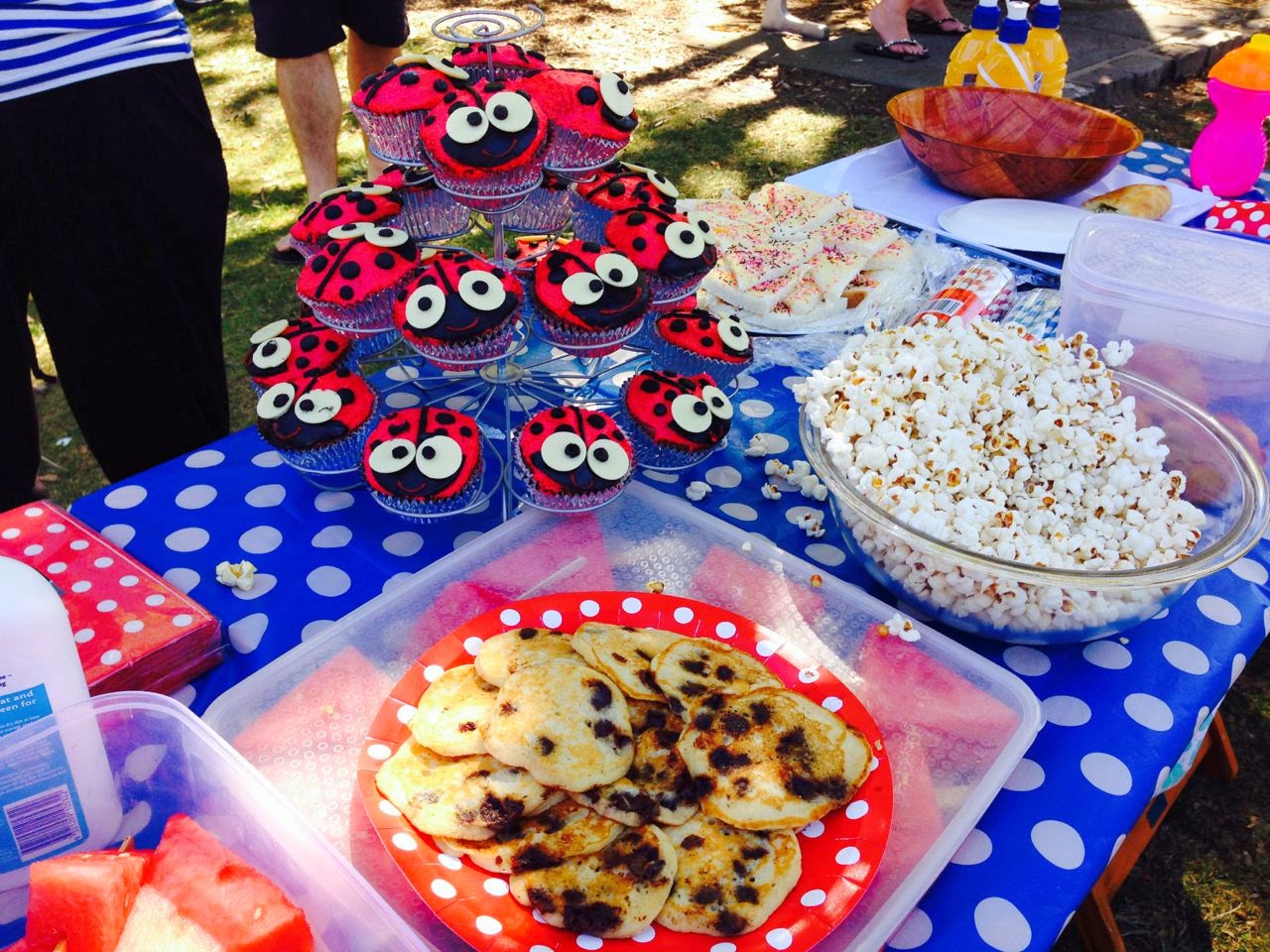 The pikelets were made for a kids party in the park.  I was glad that pikelets are a doddle to make as I made them just after Sylvia put a coin in our CD player.  So I made them just before we left.  Ideally I would have cooled them more so they didn't go soggy when piles on a plate.  They were quite floppy anyway.  The food at the party was great - popcorn, strawberry ice cream, watermelon, fairy bread and the gorgeous ladybird cupcakes. 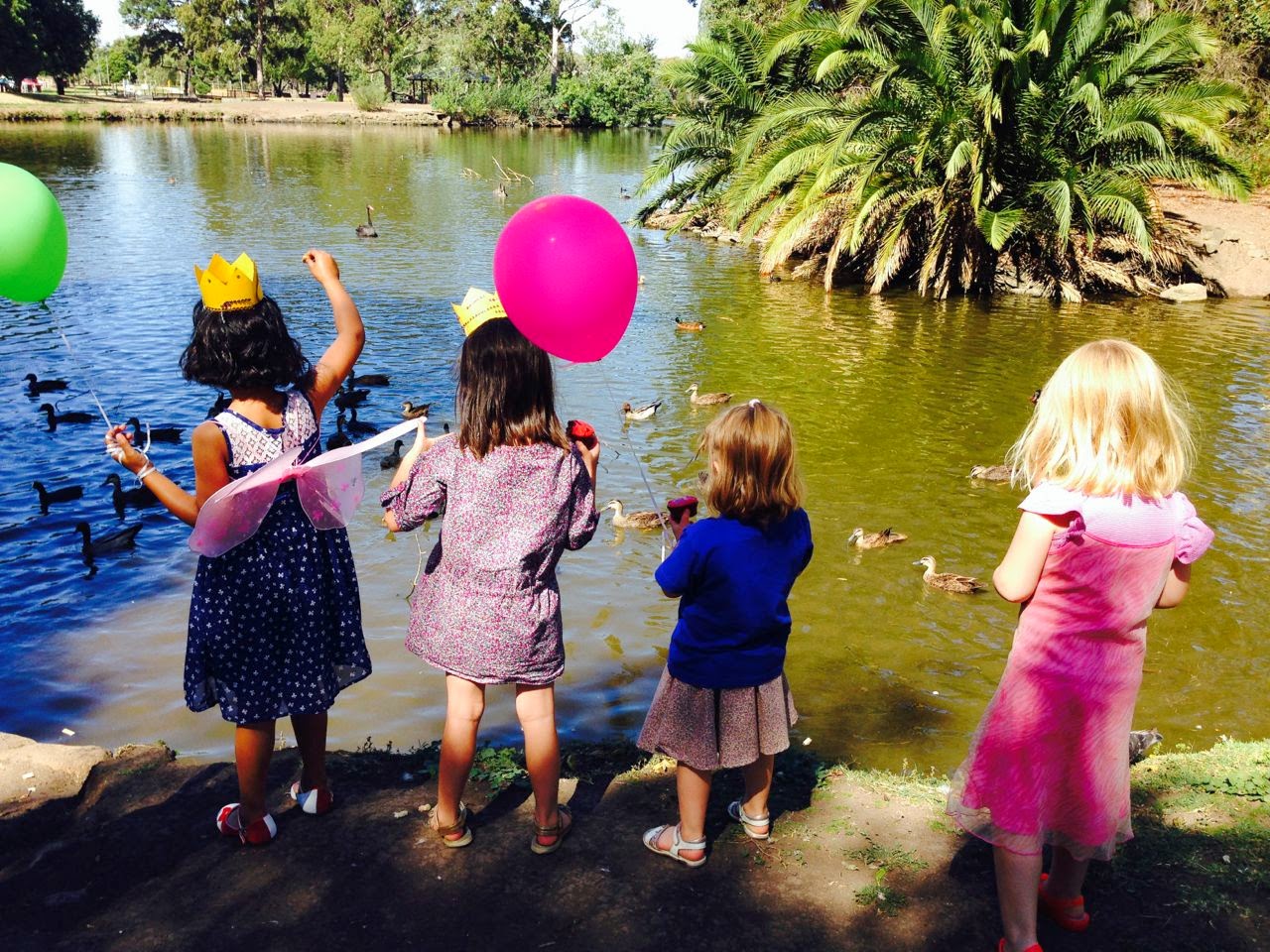 It was lovely to relax in the park and catch up with some of the parents from Sylvia's class.  She loved the make-your-own-crown activity, feeding the ducks and the balloons.  After holding her own party in the park recently, I was impressed at the effort gone into this party.  I was also glad to find that Sylvia is not the only birthday girl who isn't comfortable with the attention of singing happy birthday. 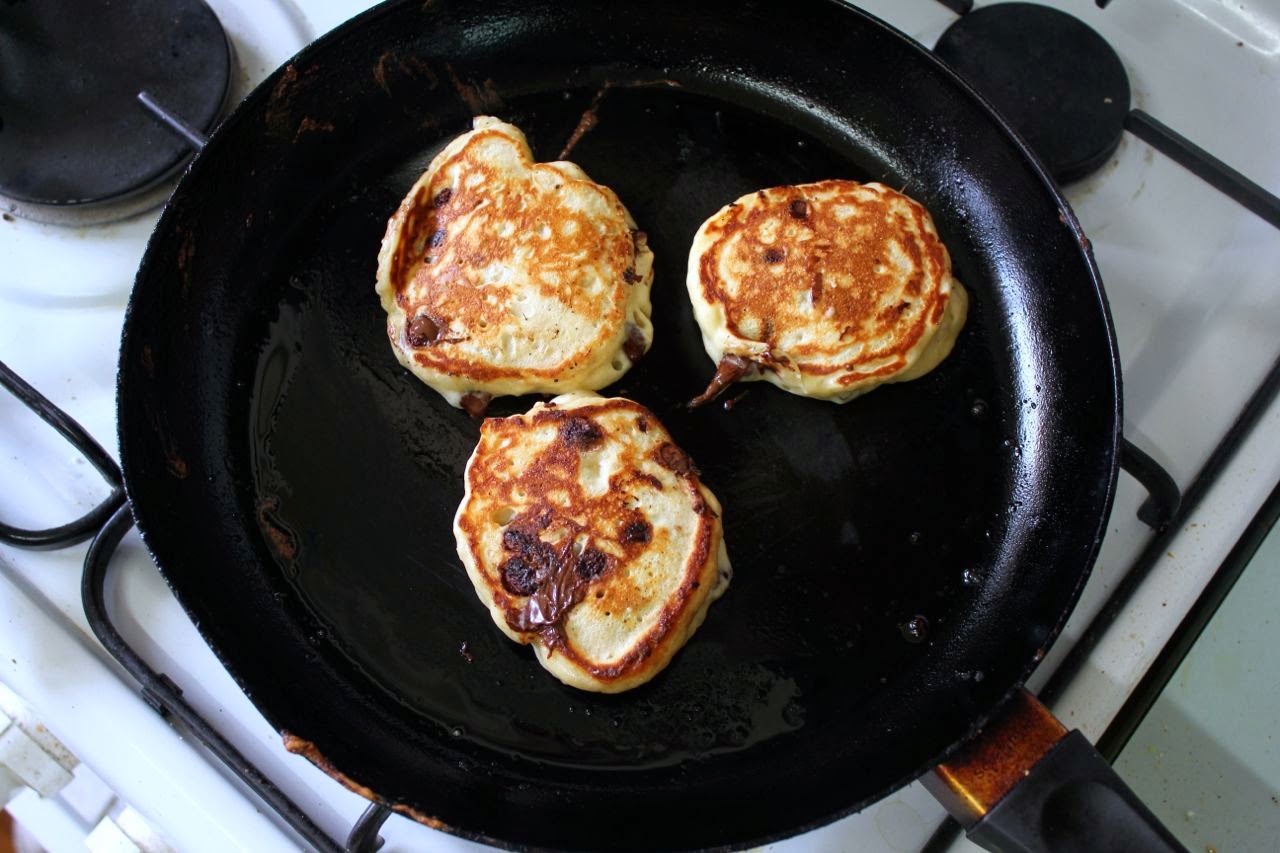 I forgot to put aside any pikelets for E in my hurry to get to the party.  So the next weekend we decided to make them again.  These ones were more like my regular ones but using some yoghurt and oats.  I burnt most of them on a low heat and found that the ones that were golden brown were heated on a higher heat. 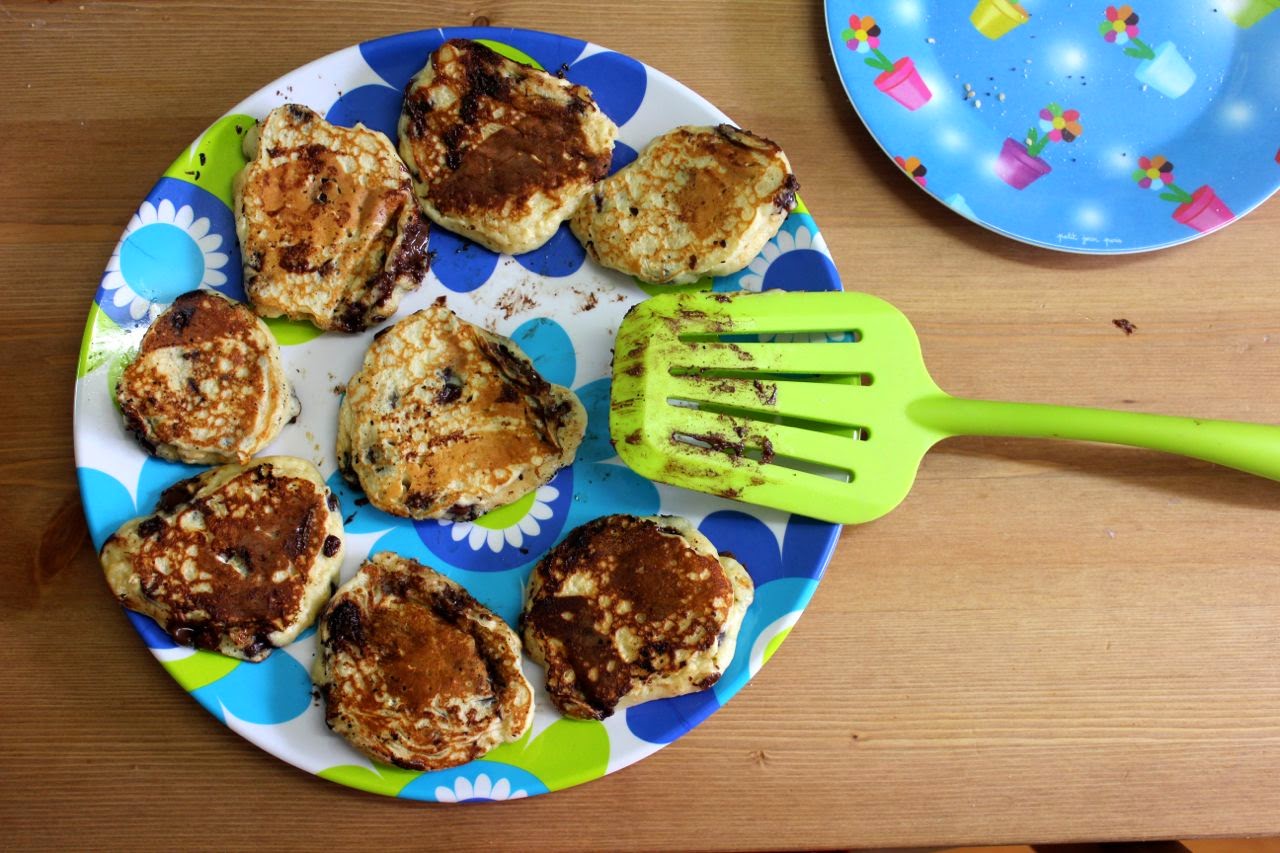 However like the previous batch of pikelets, the choc chips melted as they cooked and made for a messy frypan and a messy plate.  Sylvia was very keen to help fry the pikelets but I found it easier when E took her off to read a book while I flipped them. 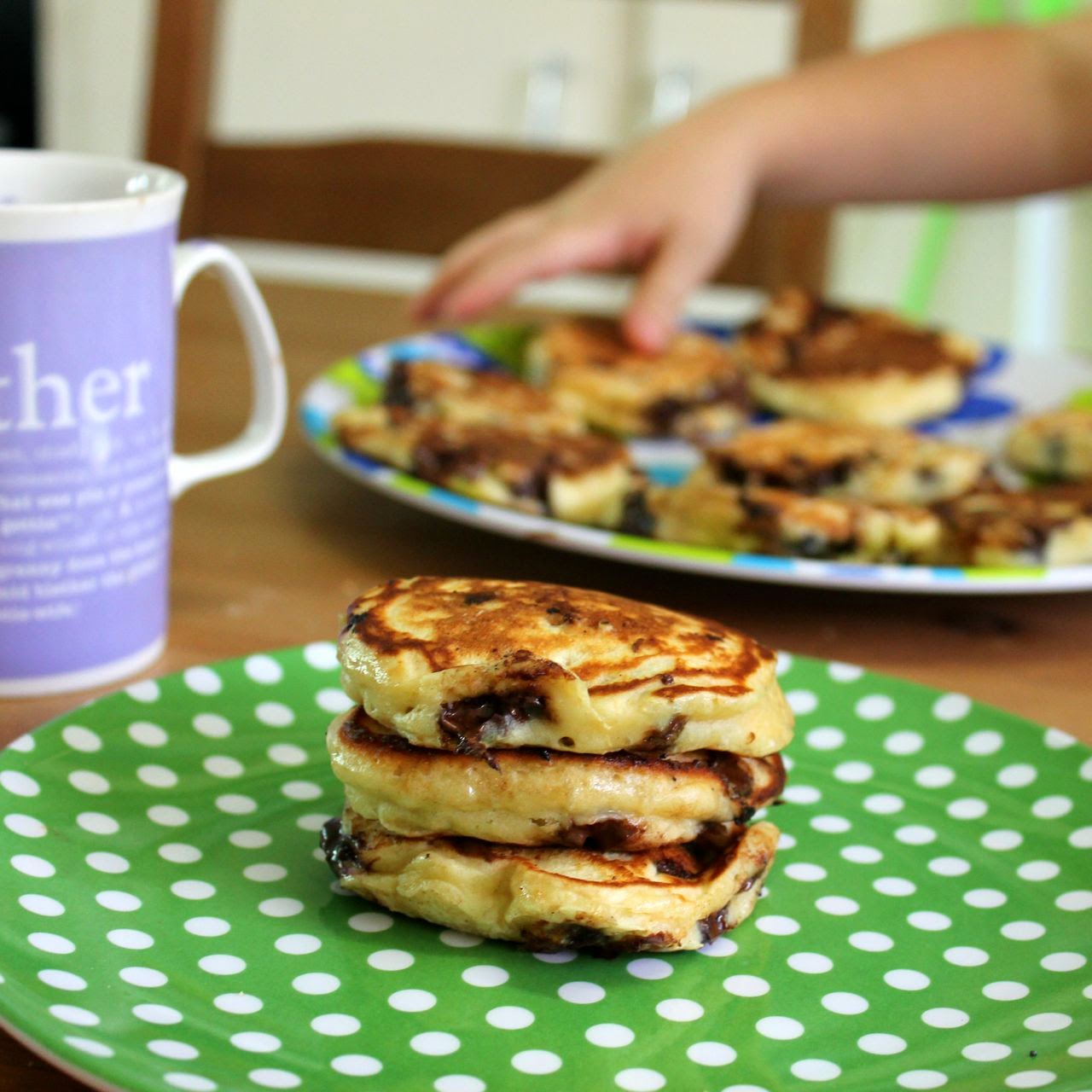 We gobbled them up quickly and I put a few away in the freezer for school lunches.  However I didn't love them as much as I thought I would.  I had moments of being unsure that choc chips really belonged in chubby pikelets.  Perhaps the more buttery thin ones were more appropriate.  I am still not sure.  I can attest to finding them rather moreish despite my misgivings.  I guess I will have to make another batch just to make sure.  I suspect I will still like them.  Whatever I feel about them with choc chips, I will be adding oats to my regular pikelets.

I am sending this to Recipe of the Week at A Mummy Too.

Previously on Green Gourmet Giraffe:
One year ago: GF Cornbread with Cheese and Sage - and random thoughts
Two years ago: WHB Cauliflower Risotto and how to avoid dinner
Three years ago: Artichoke muffins for the zoo
Four years ago: MLLA Soba salad and orange tempeh
Five years ago: Broccoli Burgers are Winners
Six years ago: WHB: In Search of the Nectarine

Choc chip pikelets
Adapted from Coles
Made about 20

Mix together the dry ingredients in a medium mixing bowl.  Whisk together the milk, egg and melted butter in a small mixing bowl or large jug and pour into the dry ingredients.  Mix to make a thin batter.  Heat heavy based non stick frypan over medium heat and swirl a little melted butter over the base to cover the pan.  Drop tablespoons of batter into the frypan (they spread quite a bit).  Flip over when the mixture bubbles and then fry on the other side another minute or so until golden brown.

Mix together ingredients to make a thick batter.  Heat heavy based frypan over medium high and swirl around a small knob of butter to just cover the pan.  Drop dessertspoons on the pan, making about 4 to 6 pikelets at a time.  When the batter slightly dries and a few bubbles form, flip the pikelets over and cook another minute or two until golden brown on the other side.  Eat warm or at room temperature.  Best eaten on day of making.

On the stereo:
Rhythm and Repose: Glen Hansard
Posted by Johanna GGG at 19:35