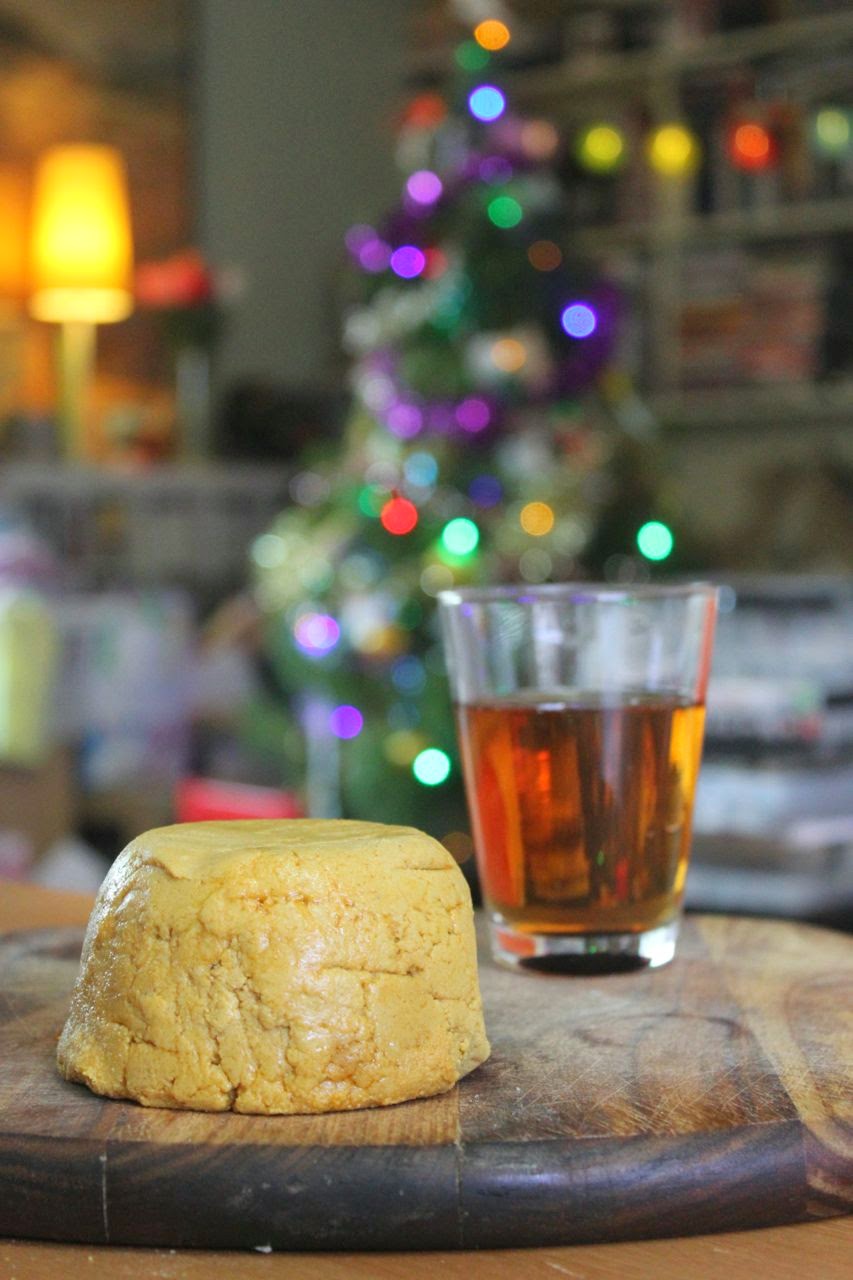 So today I am posting about some vegan cheese that I photographed months ago with a Christmas tree in the background.  It has been languishing in my blog backlog for some time but it has also been waiting. I have made a few vegan cheese before but never fermented one.  So I left this in the fridge for months.  It was there so long I would forget about it.  I didn't feel I got the texture quite right but I loved the flavour. 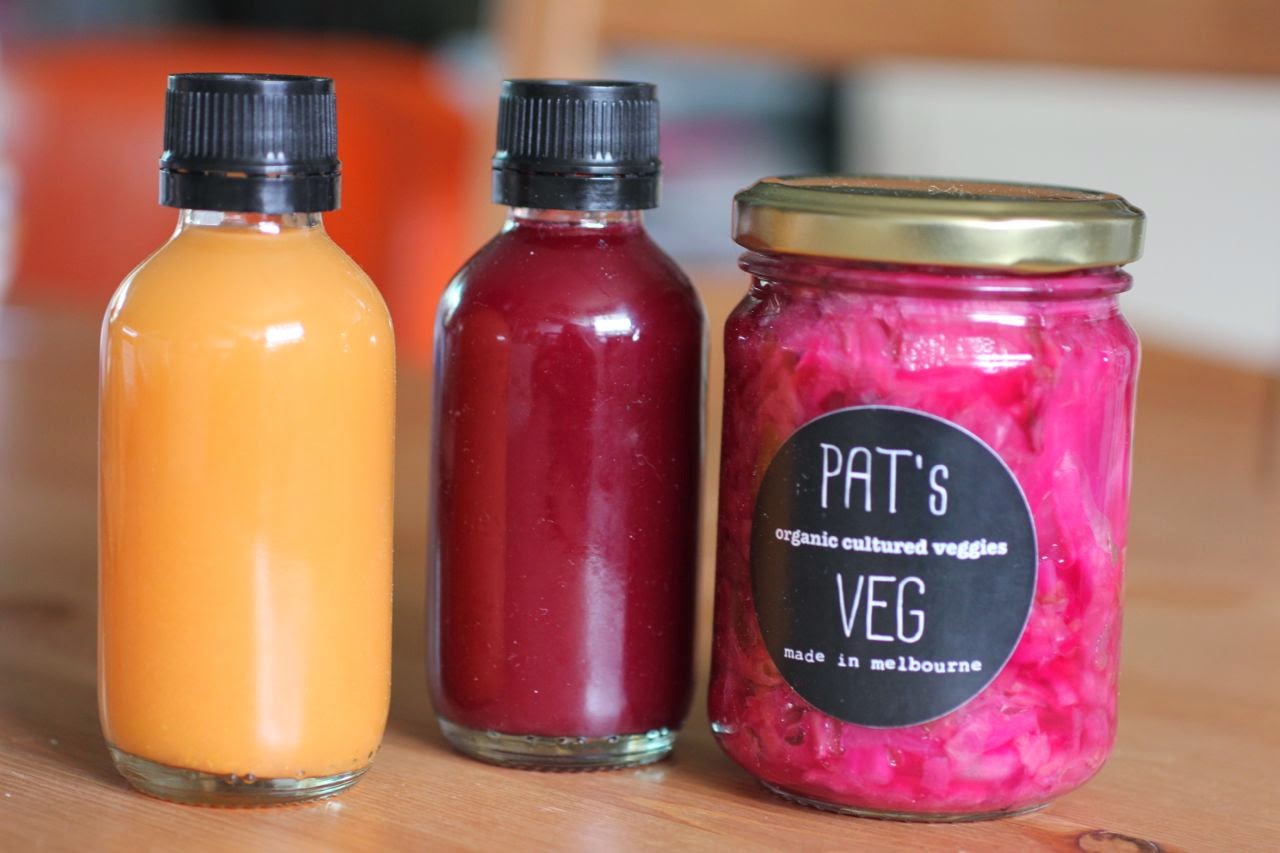 The problem with writing about this cheese so long after making it is that my memories of it aren't that sharp and I am relying on my notes.  I bought Artisan Vegan Cheese by Miyoko Schinner last year and am intrigued by her cheeses.  However the recipes aren't that straightforward.

I finally decided to avoid the few days needed to make the rejuvelac base (see the recipe online at Go Dairy Free) after I noticed a few recipes using sauerkraut in cheese.  Apparently it has some of the same probiotic qualities.  And I happened to buy some sauerkraut brine and kimchi brine from Pat's Veg at the Coburg Farmers Market. 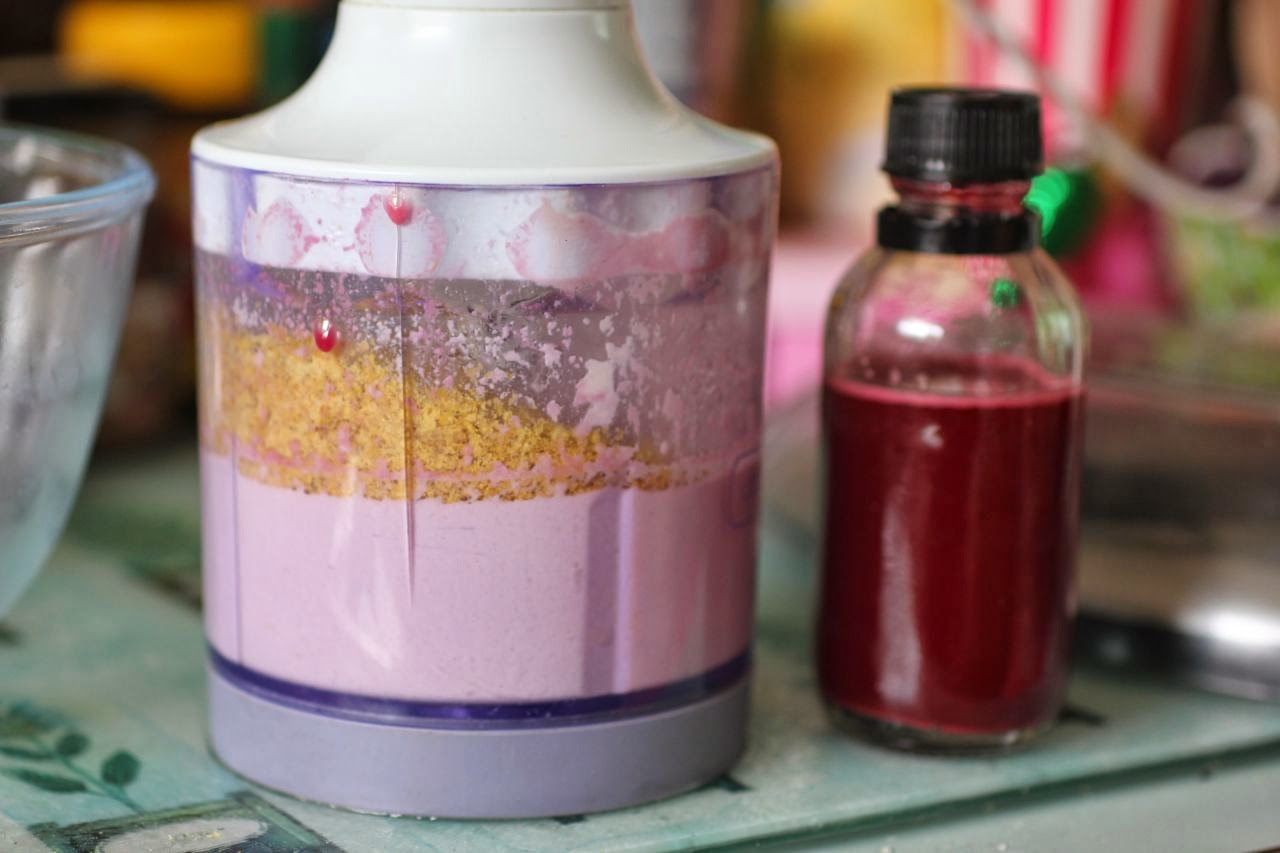 I was not quite sure if the beetroot sauerkraut or kimchi brine was better.  I used a bit of both.  I got paranoid it would be too cabbagey or too pink.  Yet the mixture had those lovely spongy texture after 12 hours at room temperature.  That is a sign of the mixture producing gas that creates air bubbles in the mixture.  I made a note of the flavour changing after the fermentation.

More worrying was that it was grainy and never reached the smooth and glossy texture.  I wondered if it was due to my blender not being powerful enough to blend the cashews. 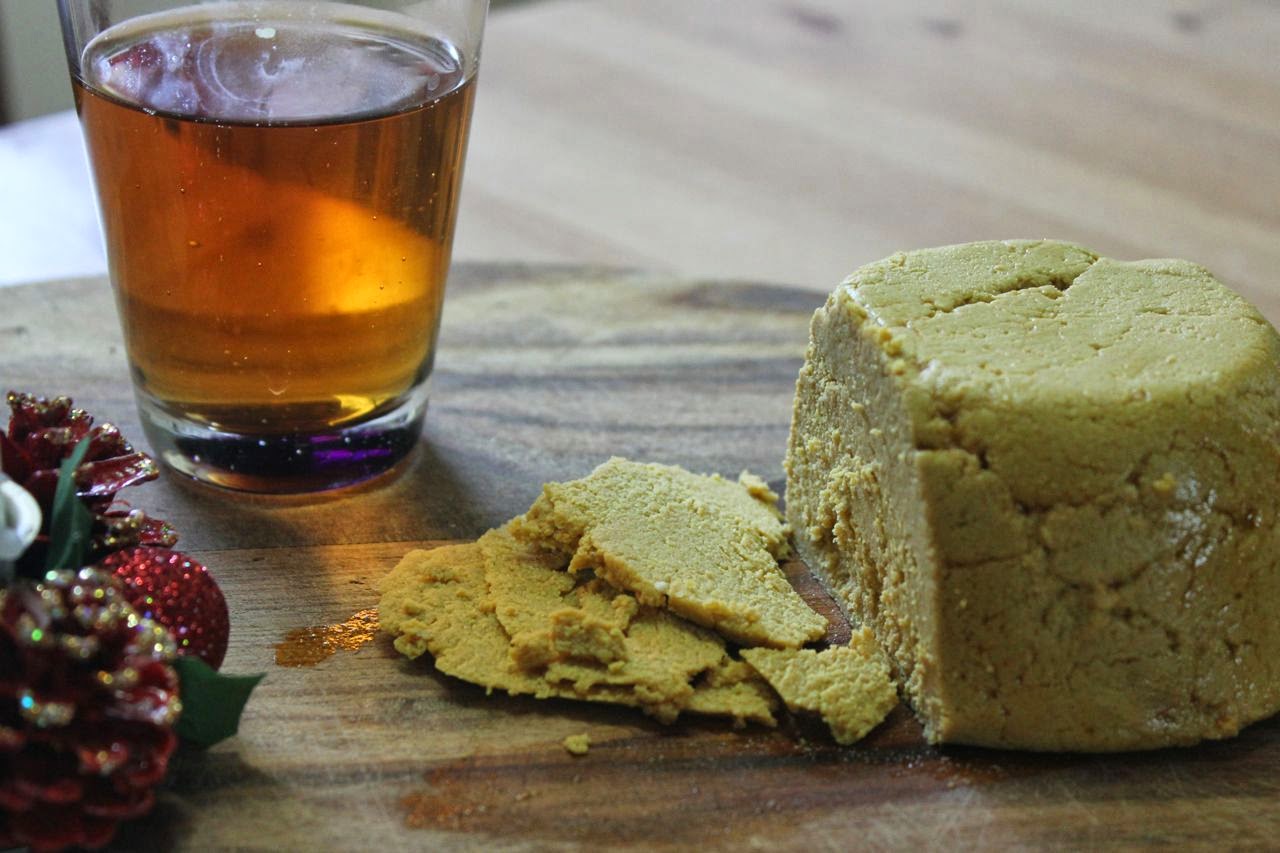 Then I was patient.  I left it in the fridge for over a month.  Then I had some with ginger ale and bread.  It sliced up quite well but was a little crumbly.  I am not sure the texture changed much after this.  I think the flavour did develop though.  The unmami savoury taste of cheese was impressive. 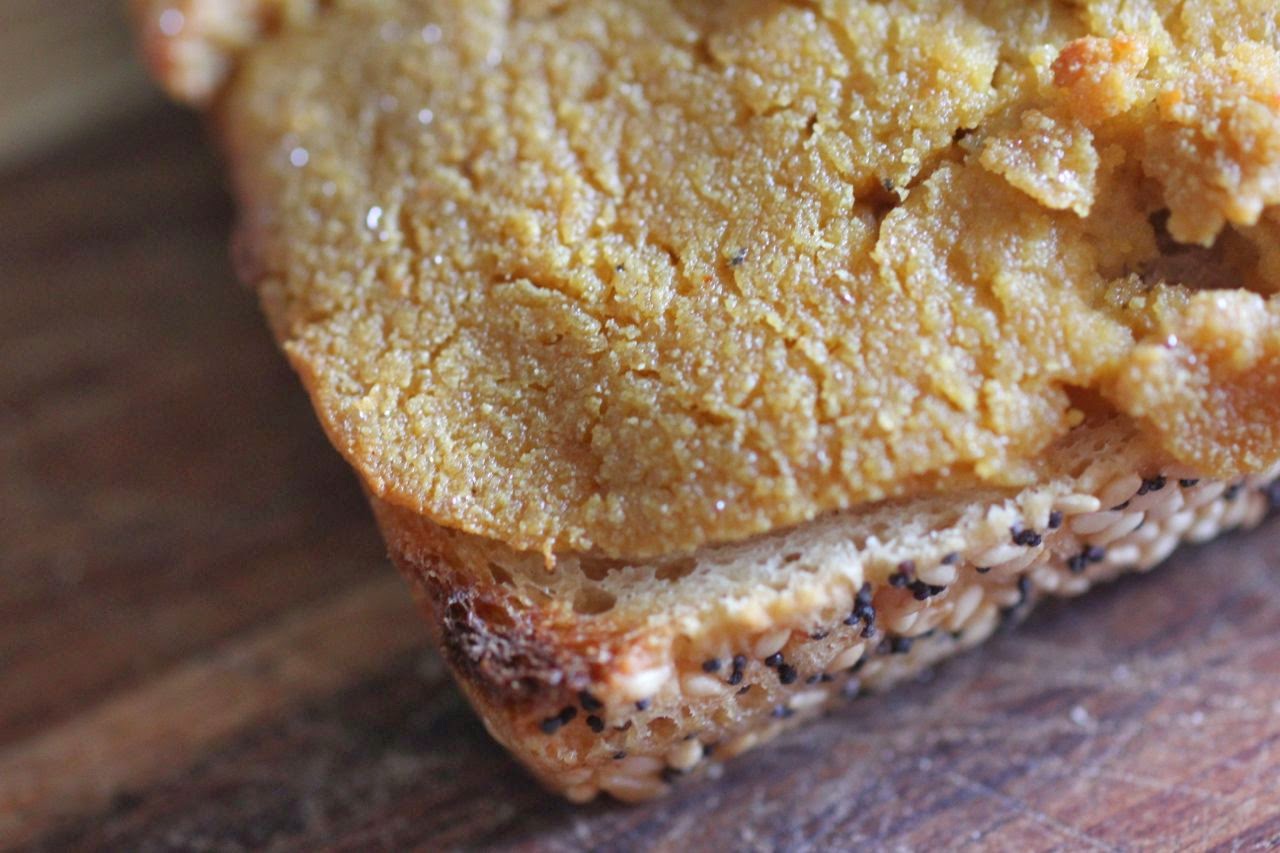 When I tasted the cheese after about 2 months in the fridge I worried it had gone a greyish colour but it tasted good.  It was also a bit soft around the edges.  I tried to grill it and there was no goo factor.  Just that dry cracked desert soil look.  I also tried it on a pizza and it didn't add much.

This was disappointing because I had added oil because it was suggested this would help it melting (though to be fair Miyoko also suggested that other cheeses in the book were better if you are really after melting cheese).  The oil seemed to make the outside of the cheese really greasy.  I wondered if this was shy it was so soft around the edge.  Next time I would not add any oil.

I have tried the cheese in a few sandwiches and enjoyed it.  Sadly I never got to try it in a reuben sandwich.  I did make this very satisfying sandwich of cheese, leftover roasted zucchini skin, baked sweet potato slices and tomato. red pepper.

Let me digress a moment to illustrate mainstream attitudes to vegan sandwiches.  A while back I was listening to high profile Australian chef, Curtis Stone, talking about going on Oprah's show to make a sandwich for a fan.  He had lots of plans for making a meat and seafood sandwich.  He arrived and found the fan he was cooking for was a vegan.  He was flabbergasted.  He made a falafel sandwich.  What shocked me was when he said, what else could I have done!  Huh?  There are so many fascinating vegan sandwiches out there. 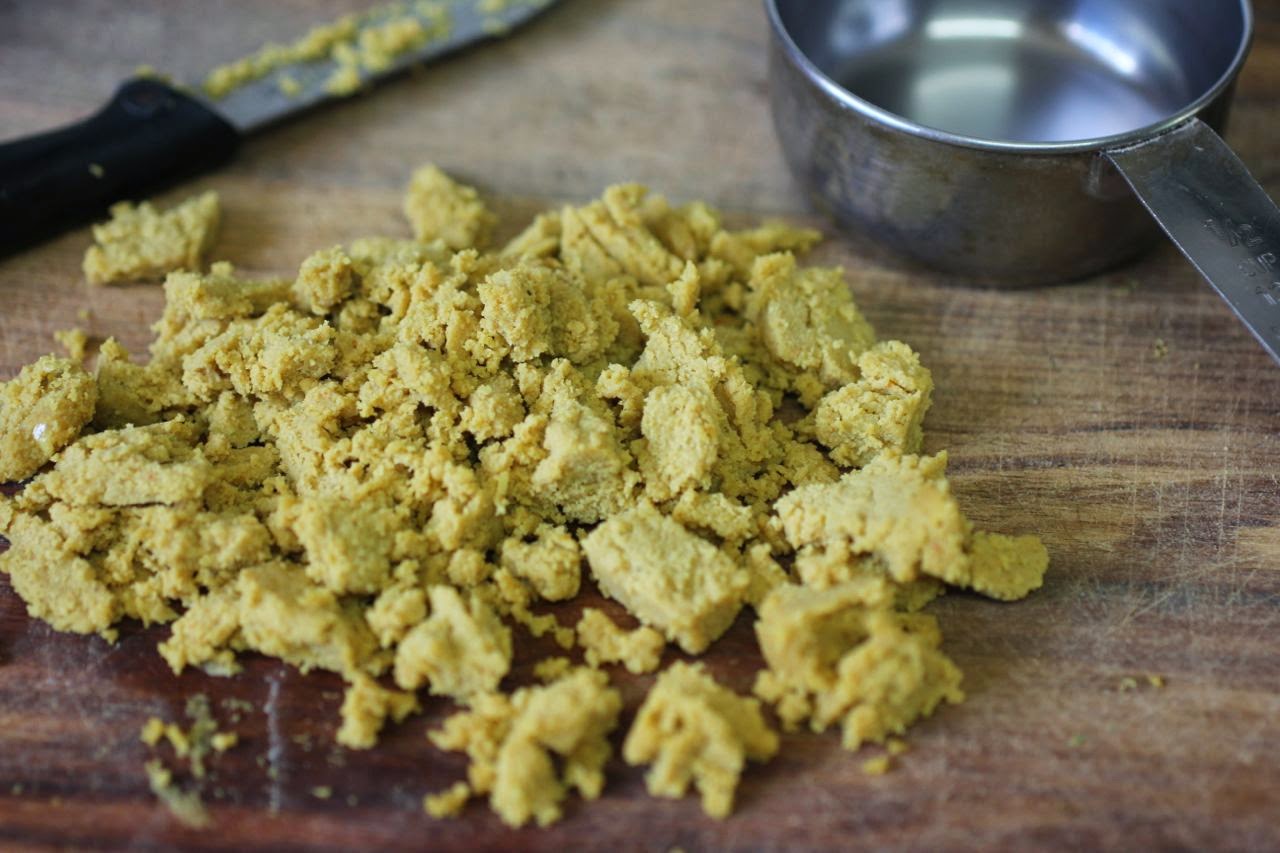 Then I forgot about the cheese.  With a start I remembered it had been in the back of the fridge for months.  (A day or two over four months if you want to be precise.)  I had a look and it had a mark like mould on it.  Isn't cheese just mould anyway?  Well I wasn't going to throw out this cheese I had worked hard on.  I trimmed it and it looked fine.

I gave E a taste and he made a comment about it being tasteless.  Hurumph!  I used it in a warm spinach dip anyway.  It definitely adding lots of flavour to the dip.  You can see below that it also went well with the spinach dip and an oatcake. 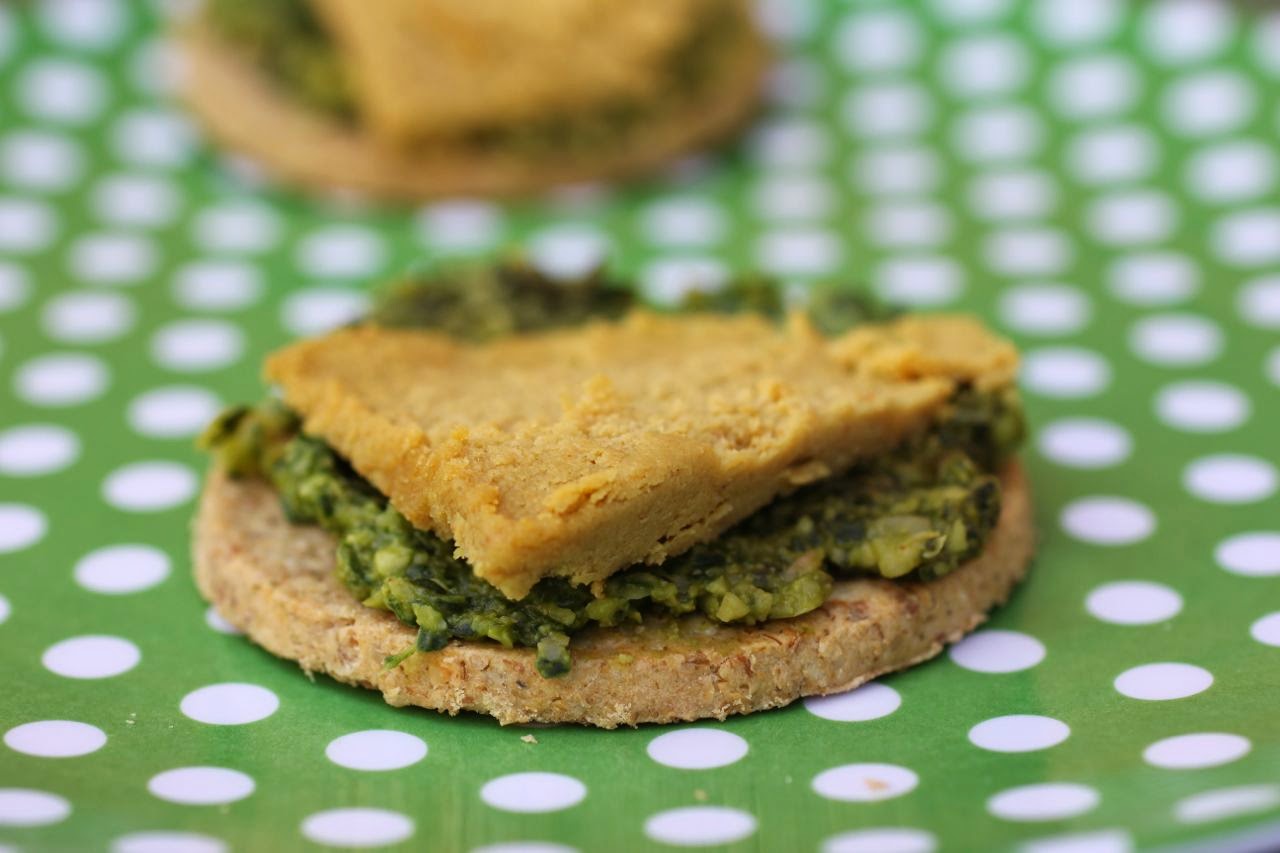 So great taste but not so good on the texture.  While not an overall success, I enjoyed experimenting with this cheese and would be interested to try it again.  I am also interested in other cheeses from Miyoko's book.  It still seems like quite an undertaking so I can't imagine it would be a regular cheese for me.  However I am excited by vegan cheese and will continue to explore it further. 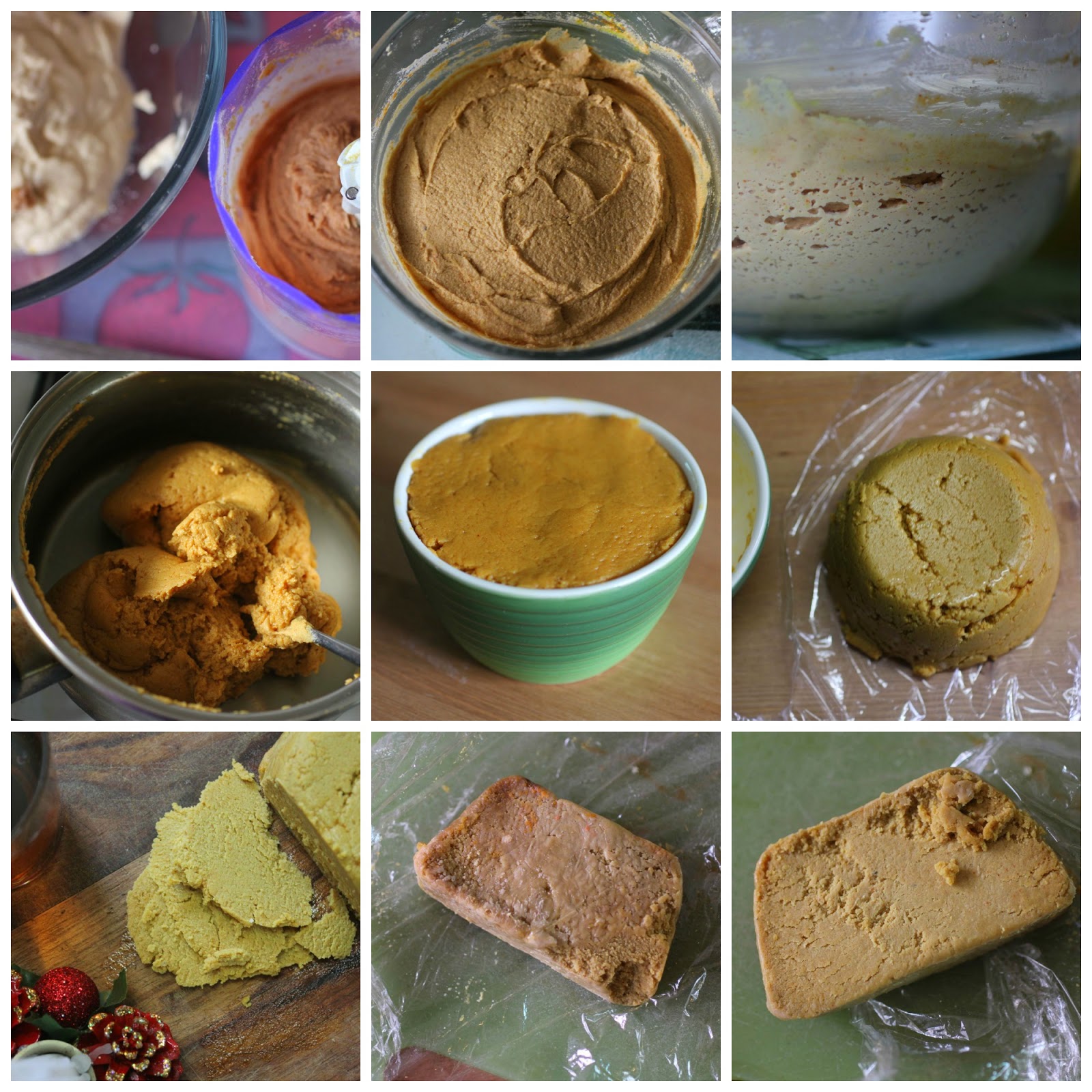 Above: a photo journey of my sharp vegan cheddar cheese.

Top row (L to R): 1. I blended my ingredients in two batches because my blender is so little. 2. Then I mixed the two batches together.  3. I left them at room temperature for 2 days and the mixture became spongy with air pockets.

Middle row (L to R): 4. I mixed the 'cheese' over  the mixture in a saucepan until it pulled away from the edges.  5. I tipped it into the ramekin to let it set in the fridge.  6. Once cool I tipped it out and wrapped it in cling wrap and kept it in a zip lock bag in the fridge.

Bottom row (L to R): 7. I tried slicing it at just under 2 months.  8. At just over 4 months it seemed mouldy on the outside.  9. When I trimmed off the edges it still was quite good inside but needed to be used.

I am sending this cheese to Ricki Heller's Wellness Weekends.  I am also sending it to  Healthy Vegan Fridays, hosted by Suzanne at Hello Veggy, Anna at Herbivore Triathlete, and Kimmy at Rock My Vegan Socks.

Blend all ingredients except the xanthum gum and agar until smooth and creamy.  (I forgot to leave out the agar and xanthum gum so everything went in for me.)  Transfer to a glass bowl and set aside at room temperature for 24 to 72 hours, depending on how sharp you want the cheese (the longer the sharper - I left mine 2 days).

Transfer to a saucepan and cook until glossy and pulling away from the sides.  Miyoko suggests about 5 minutes but I did it for 8 minutes and it was still a bit grainy in texture.  Transfer to a container and store in the fridge.

Once it was cool and firm I tipped it out of the ramekin, wrapped it in clingwrap and stored in the fridge in a ziplock bag.  The recipe suggests leaving in the fridge for up to 4 months and that it will firm up especially after 3 months.

*NOTE: I found that the cheese was quite greasy and I would not add the oil next time.

On the stereo:
Flirting with Mermaids: Manitoba Hal Broland
Posted by Johanna GGG at 22:26