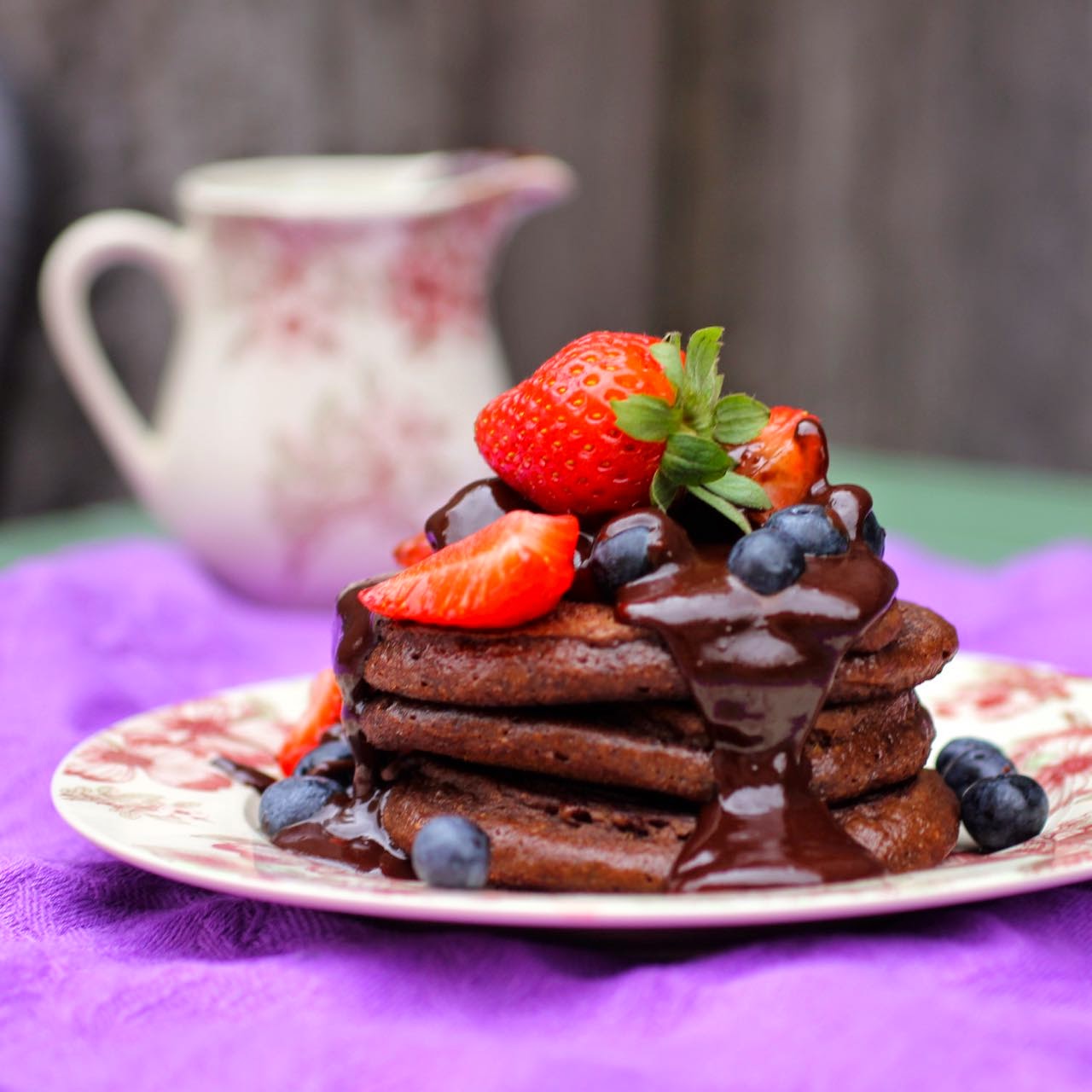 Everyone deserves a second chance.  I had one on Shrove Tuesday this year.  You see, on my birthday I went to the Pancake Parlour to indulge in chocolate pancakes but was disappointed.  It was too much ice cream and not enough pancake.  So I made them myself and they were perfect.  Give me chocolate sauce and berries rather than ice cream any day! 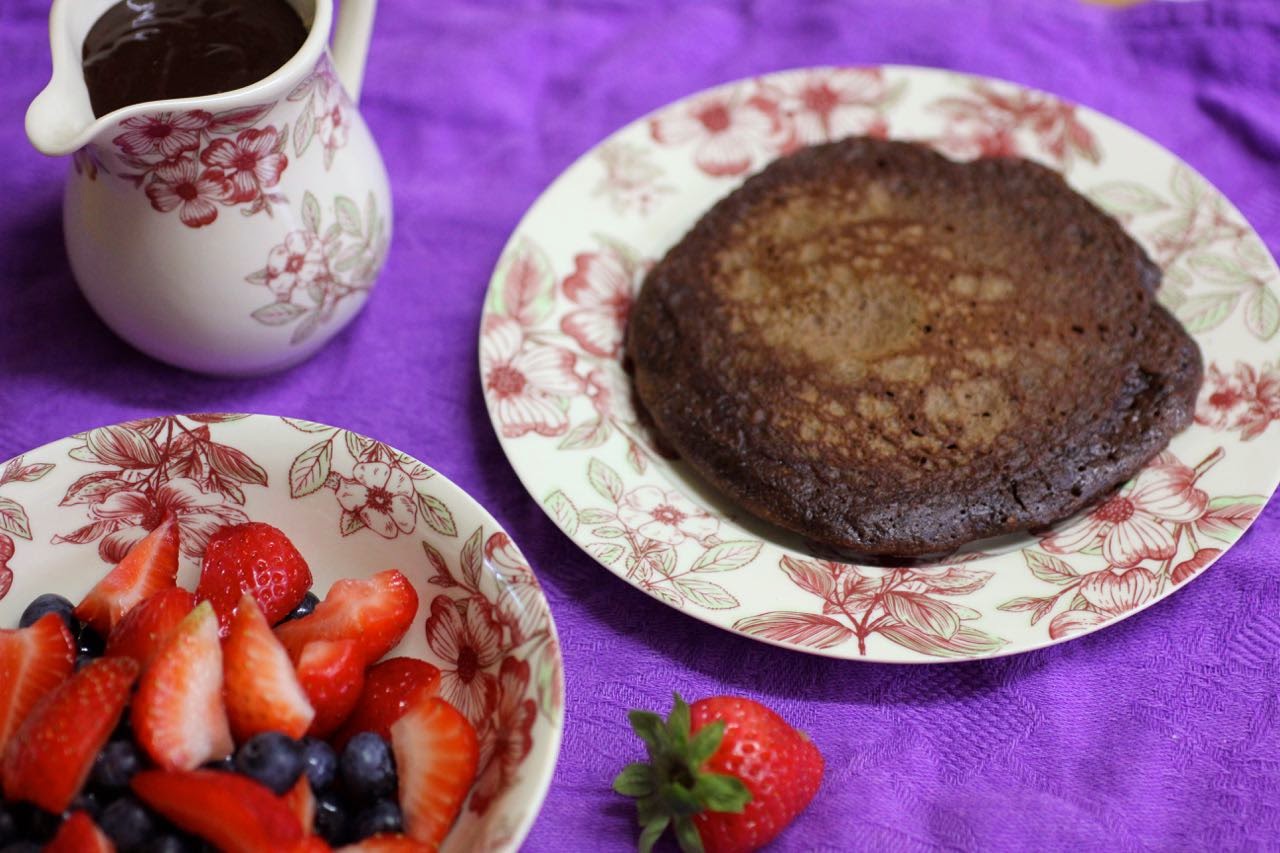 The chocolate pancake recipe was found through Jac's 25 pancake stacks to drool over.  They were too decadent for breakfast so we had them for dessert.  After a simple soup for dinner.  The first pancake I made was a bit one but after that I made them smaller like my usual ones.  Even with crowding a few on the pan I found that this mixture made a lot of pancakes.  We still have quite a few of them in the freezer.

The chocolate sauce was a revelation.  Last year I found an idea on Fat Free Vegan for chocolate ganache using choc chips, milk and nut butter rather than chocolate and cream.  I used this for the sauce and it worked brilliantly.  This uses ingredients we usually have about rather than having to buy cream. 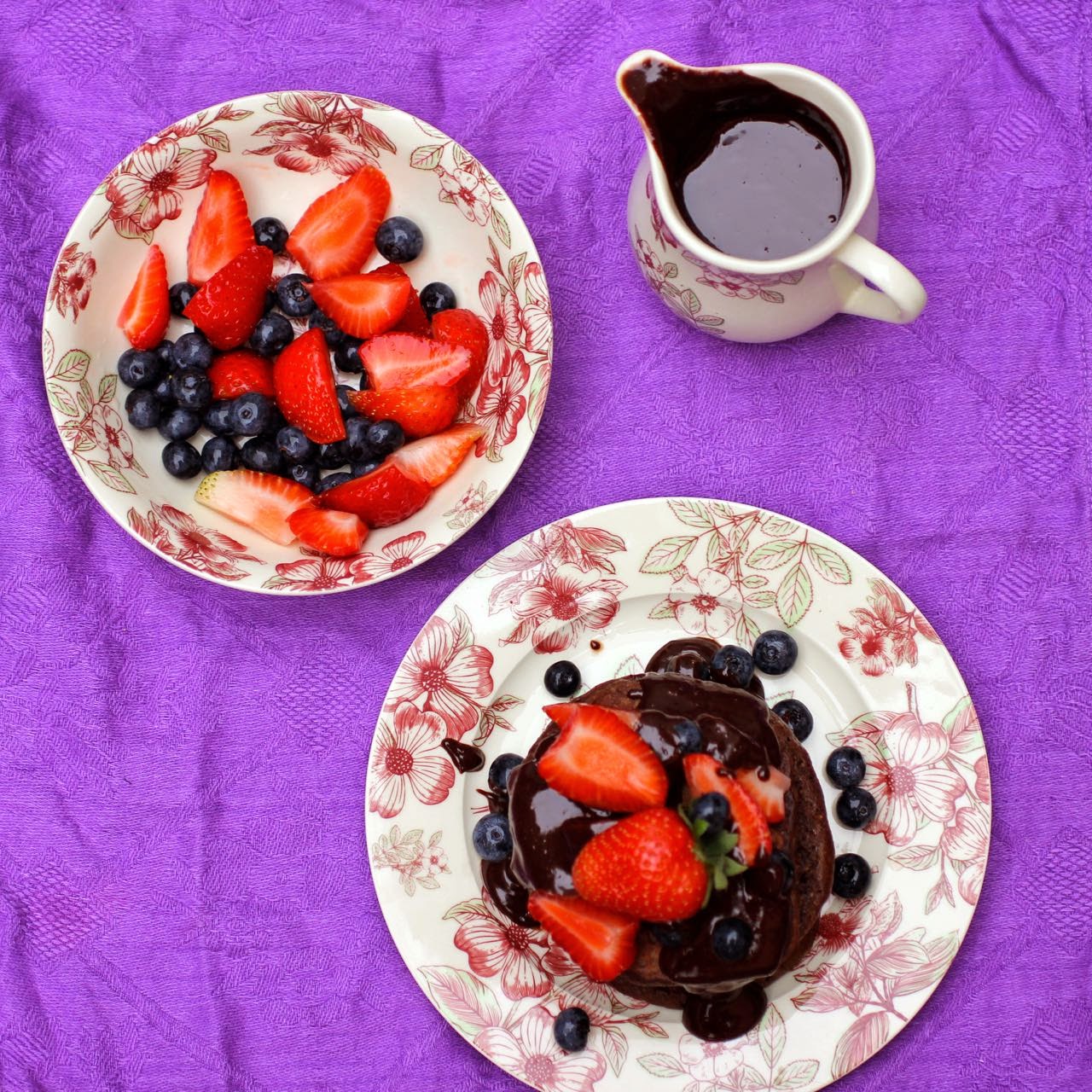 The pancakes tasted so good I wanted to take some photos to do them justice.  They were dark and decadent in flavour, yet light and fluffy with texture.  The rich fudgy chocolate sauce worked perfectly with the juicy berries and pillowy pancakes.  E and Sylvia had some ice cream with theirs but I thought they were crazy!

It was a gloomy grey day.  By the time we had made the pancakes after dinner, the light was dull inside.  I took the pancakes outside where I found it was drizzling.  I then discovered that my camera memory card was full and while I was trying to clear it our cat started taking an interest in the pancakes! 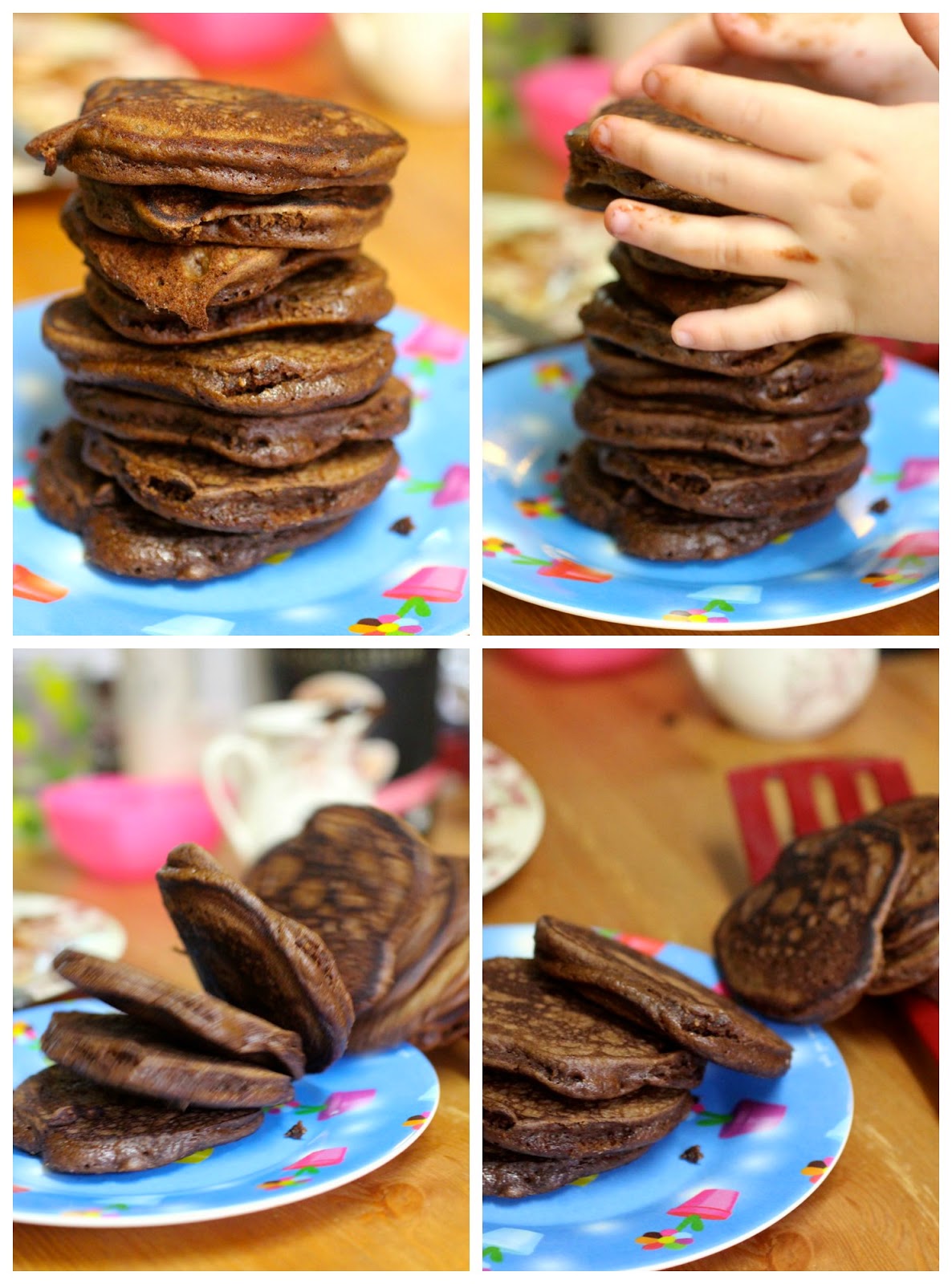 We had so many pancakes that we were able to have a go at stacking them.  I am always amazed at photos of huge stacks of pancakes.  Do people ever eat that many?  And how do they stay in a neat stack.  I took some photos of Sylvia trying to stack them and you can see it was not easy.  Seriously if I really wanted to do it properly I would make bigger pancakes and stack them without a 5 year old about.

It was a fitting end to the evening when I read to Sylvia before bedtime and the book was about the Moomins eating pancakes.  We have recently finished the Finn Family Moomintroll.  It has awakened me to the charm of the Moomins.  I really loved it when the Hobgoblin visited and was given some pancakes.  He hadn't eaten pancakes for 85 years.  Yet I think he should eat them more often because the Moomins felt that "one can't be too dangerous, if they like to eat pancakes.  I heartily agree!

I am sending these pancakes to Bangers and; Mash and Eat Your Veg for February's Healthy Family Foodies blog event with the theme of Pancake Party, and to Jac at Tinned Tomatoes for Bookmarked Recipes.

Heat a large non stick heavy bottomed frypan over medium heat.  Rub a little butter, margarine or oil over the surface (I use the back of a teaspoon to spread margarine about).  Drop heaped dessertspoons of mixture onto pan with a little space between them.  Cook for 1 to 2 minutes - a few bubbles should appear - flip and cook another minute or so until lightly browned on each side.

Eat warm with berries and chocolate sauce.  (Leftovers can be frozen or kept for the lunchbox the next day.)

Microwave on 30 seconds or until choc chips are just about melted and stir well until smooth and glossy.

On the Stereo:
Weightlifting - Trash Can Sinatras
Posted by Johanna GGG at 10:29