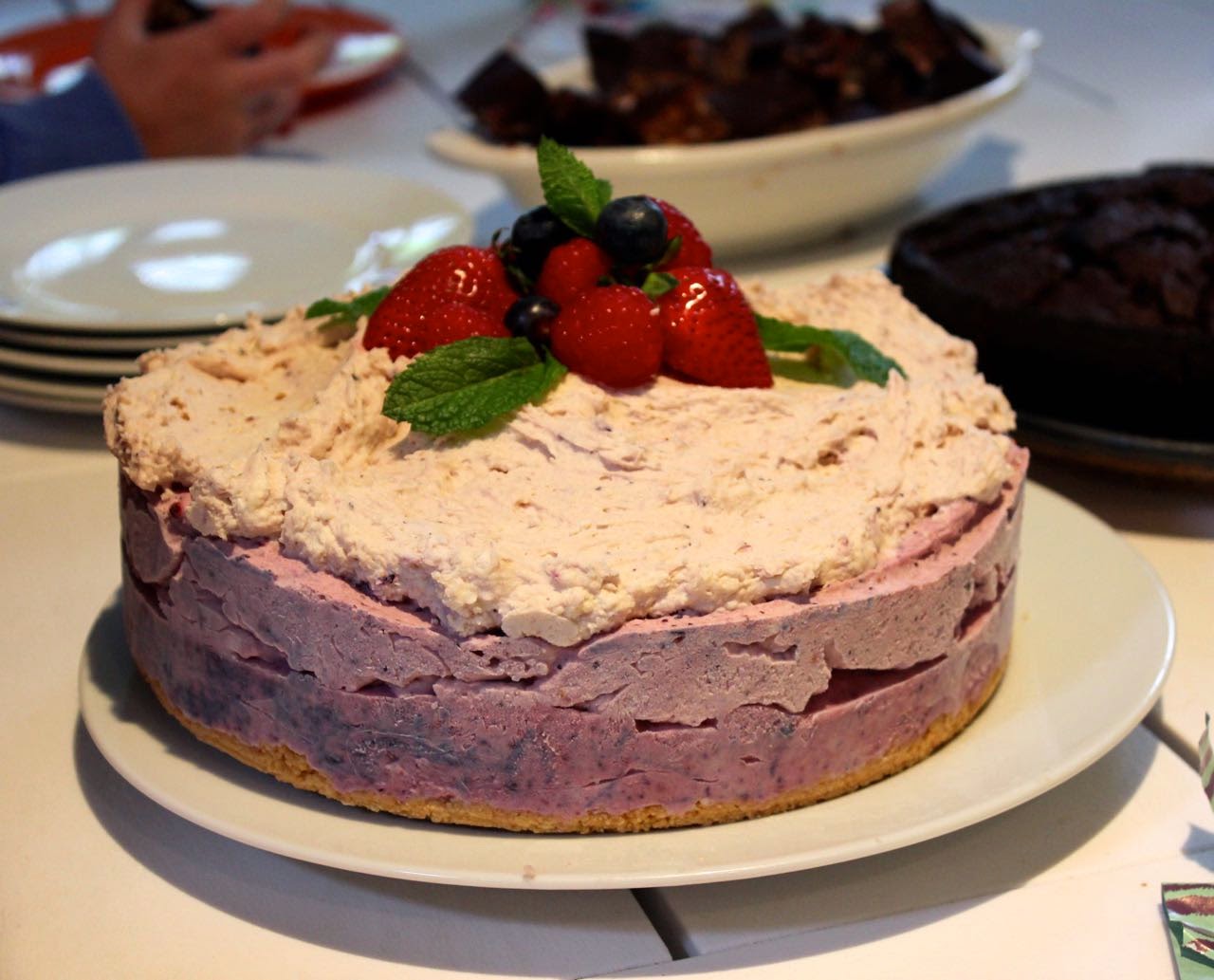 Holding my mum's birthday lunch at the Ocean Grove holiday house presented a challenge when it came to baking a cake.  Strange equipment, an unfamiliar oven and minimal pantry aren't ideal baking conditions.  Not to mention the memory of hot summer days last year, and family members who eat gluten free and nut free.  Cheesecake was the answer. 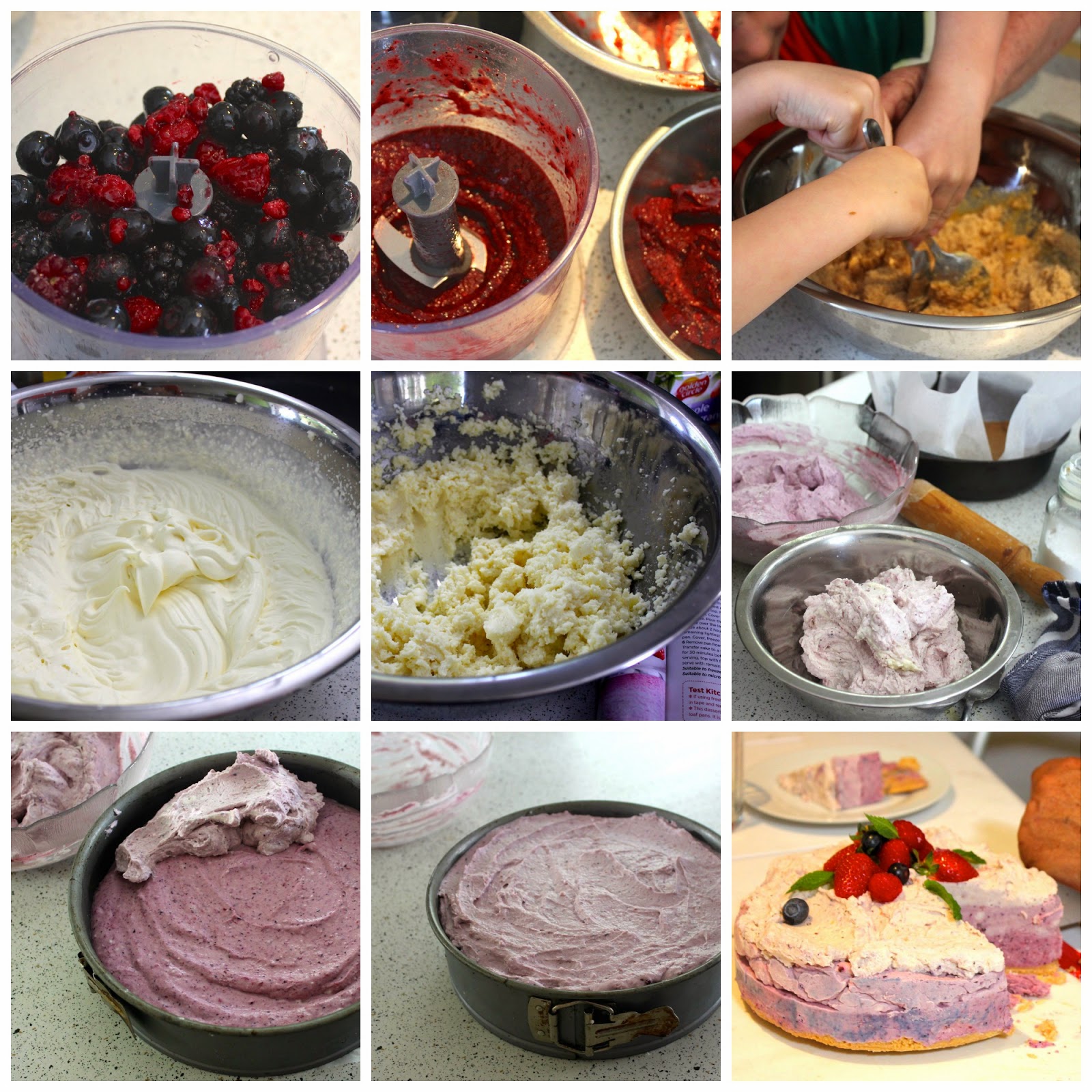 My mum had it all under control with a spectacular recipe, bringing along her electric beaters and making sure we had the ingredients.  I helped her make it the day before.  We were actually making two cheesecakes.  One was a no bake vanilla cheesecake (with cream cheese) that mum had loved recipe and the other was a showstopper berry ice cream cheesecake made with ricotta cheese.

It is the berry cheesecake that I am featuring here.  As you can see in the above pictures it was quite a bit of work because of all of the layers.  It had to be made the day before to freeze it overnight, but also so that we could relax on my mum's birthday.  We used gluten free biscuits in the base but due to a mix-up the gingersnaps ended up on the vanilla cheesecake rather than the berry one. 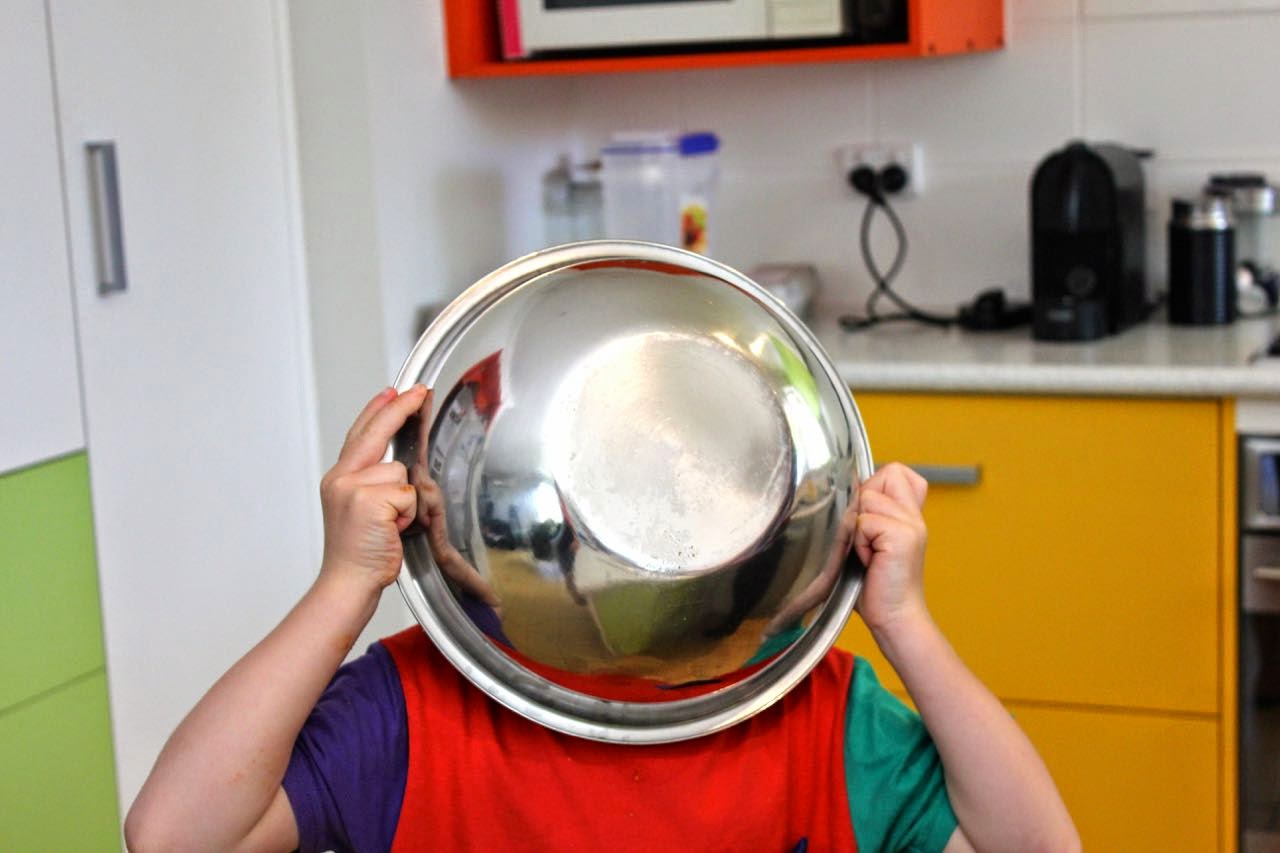 At the same time Chris was supervising Dash and Sylvia to make Nigella's rocky road crunch.  The kitchen was busy but full of fun.  I regret to say that I didn't get any photos of the rocky road crunch so below is a work in progress picture.  It might look at mess but it was so so so delicious and went rather quickly at the lunch. 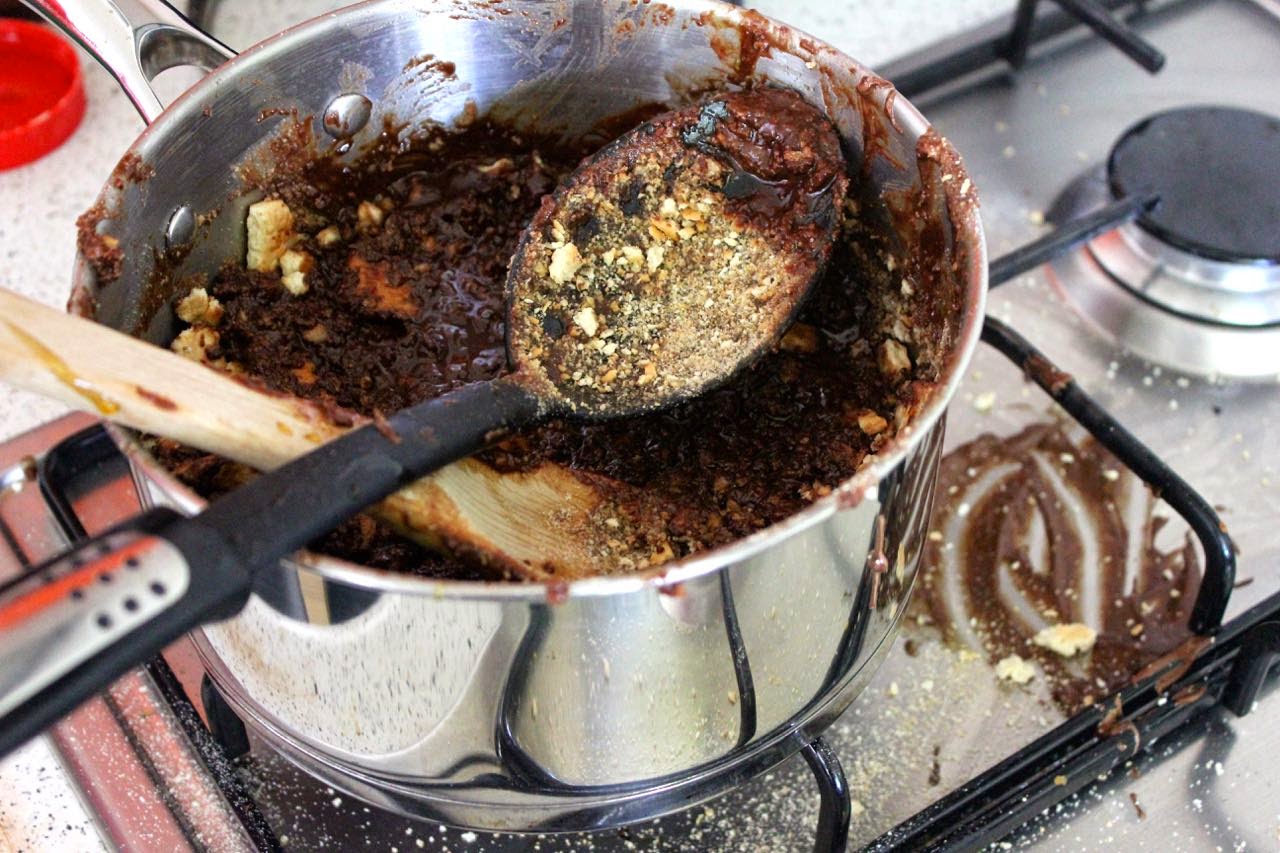 There were many preparations for my mum's birthday.   The grandkids were busy with projects.  They created a little booklets of birthday wishes as well as making a video presentation.  My brother helped them to write and record a humourous birthday song. 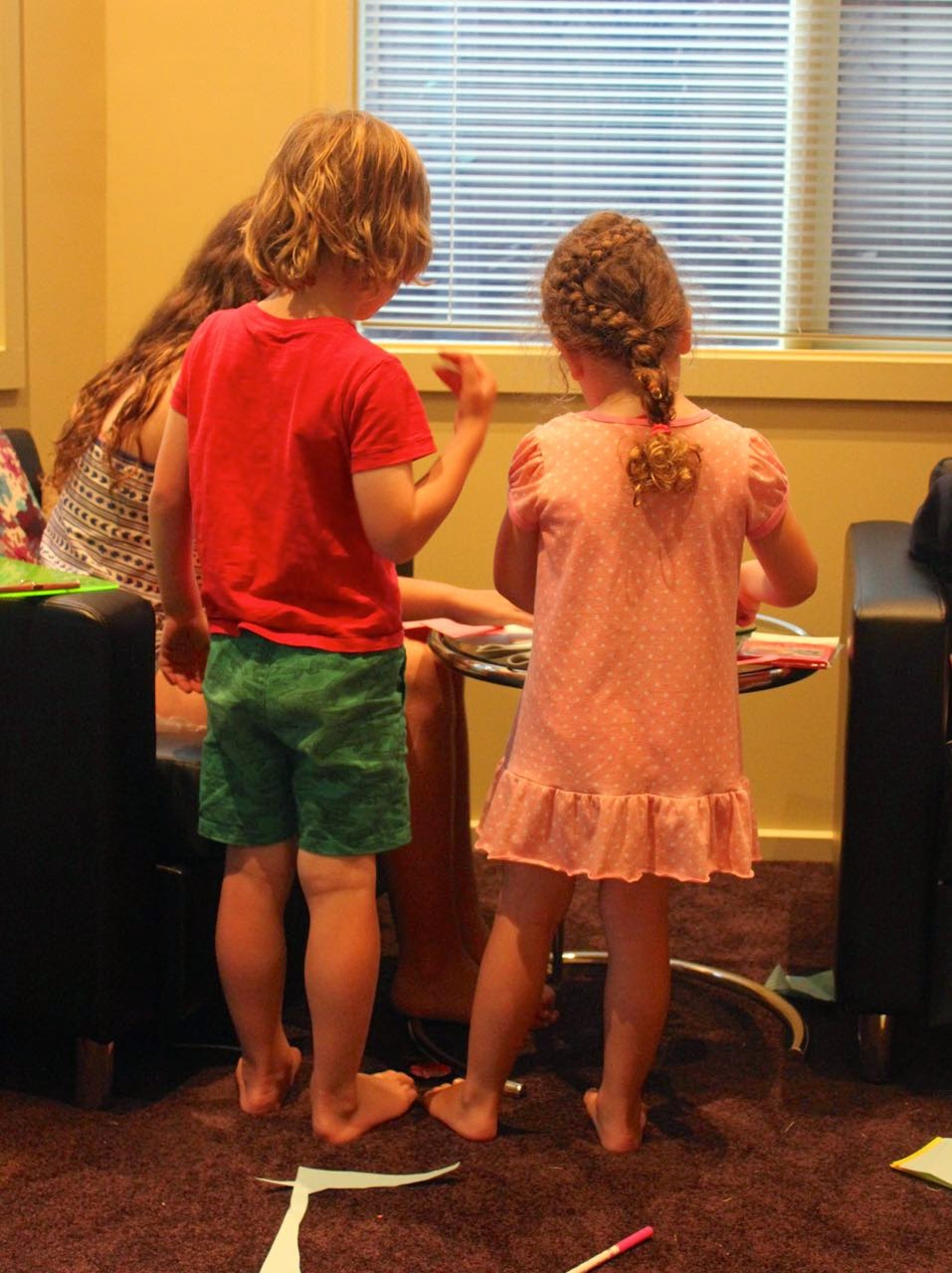 On the day of my mum's birthday all six of my siblings and families came along.  It is always a bit of a challenge to get everyone there (a couple of in-laws were missing due to work commitments).   Andy and Paul carried the outside table inside so that all 19 of us could sit down to eat lunch.

Flowers were selected, cakes brought along, salads made and at 8.30 in the morning Susie's boyfriend started cooking the meat in his webber bbq.  Crazy carnivores!  Our vegetarian sausages didn't have to start cooking quite so early but were nicely charred! 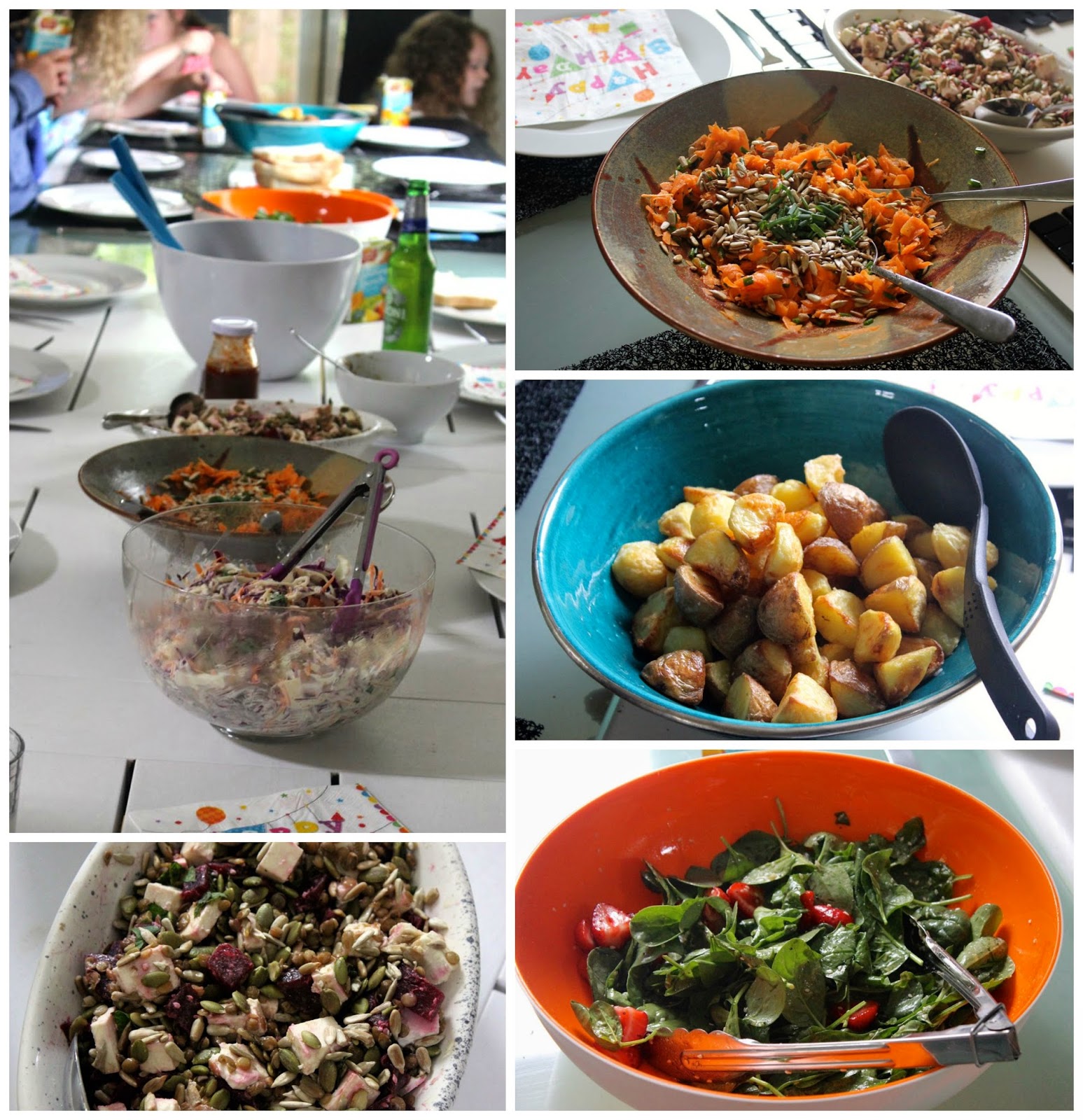 With so much activity going on, it was easy to be distracted.  I made a carrot and sunflower seed salad.  However I managed to get caught up at the rehearsals of the kids' song and forget I was toasting sunflower seeds on the stovetop.  Luckily Chris was looking after them.  Then I discovered that the lemons had been used up in gin and tonics so I headed out to the supermarket for more and for some birthday candles.  Unfortunately I didn't take any kids because they would have loved the snake on show by the reptile handler. 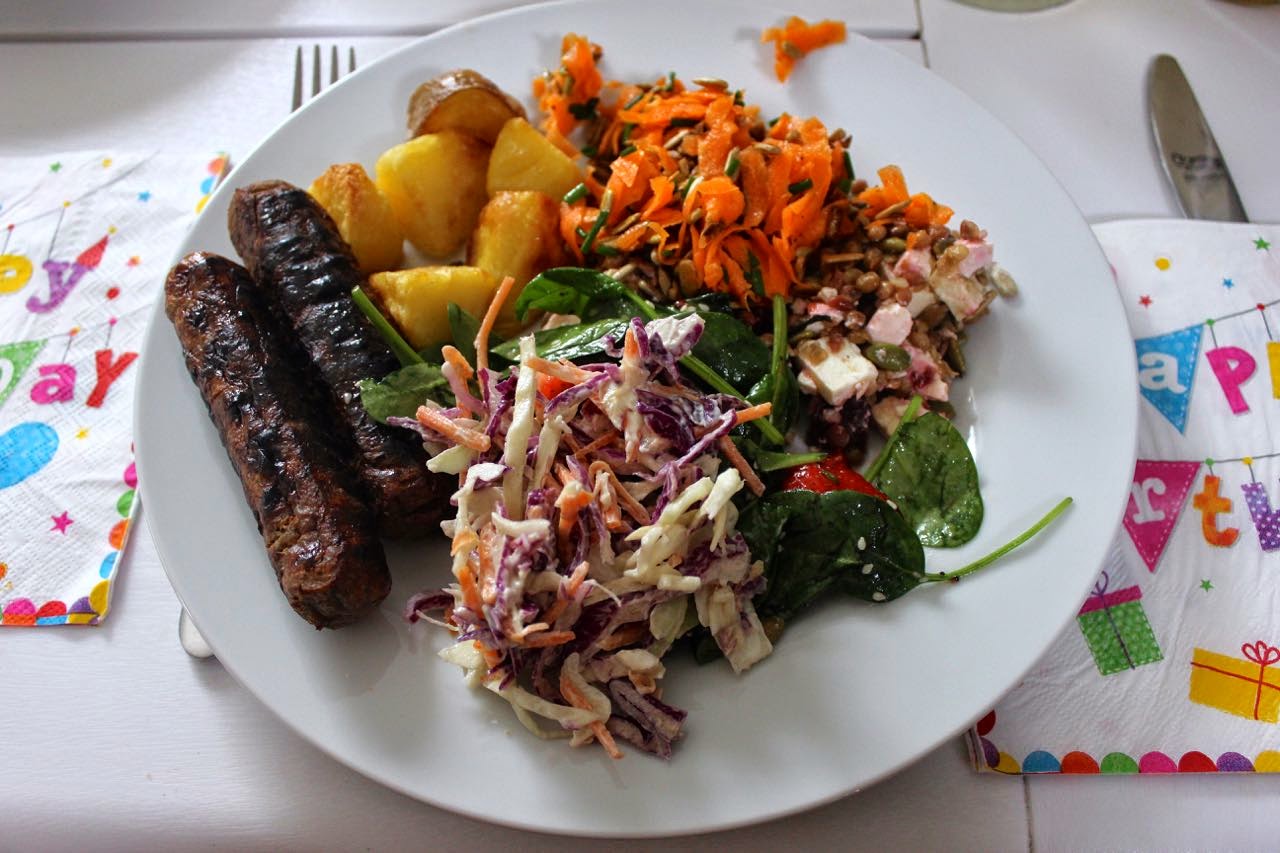 Finally we all sat down to lunch.  Here is my dinner plate.  Amazing, huh!  Vegetarian sausages, roast potatoes, coleslaw, lentil and beetroot salad, carrot and sunflower seed salad, and Fran's wonderful spinach and strawberry salad with a honey and poppy seed dressing. 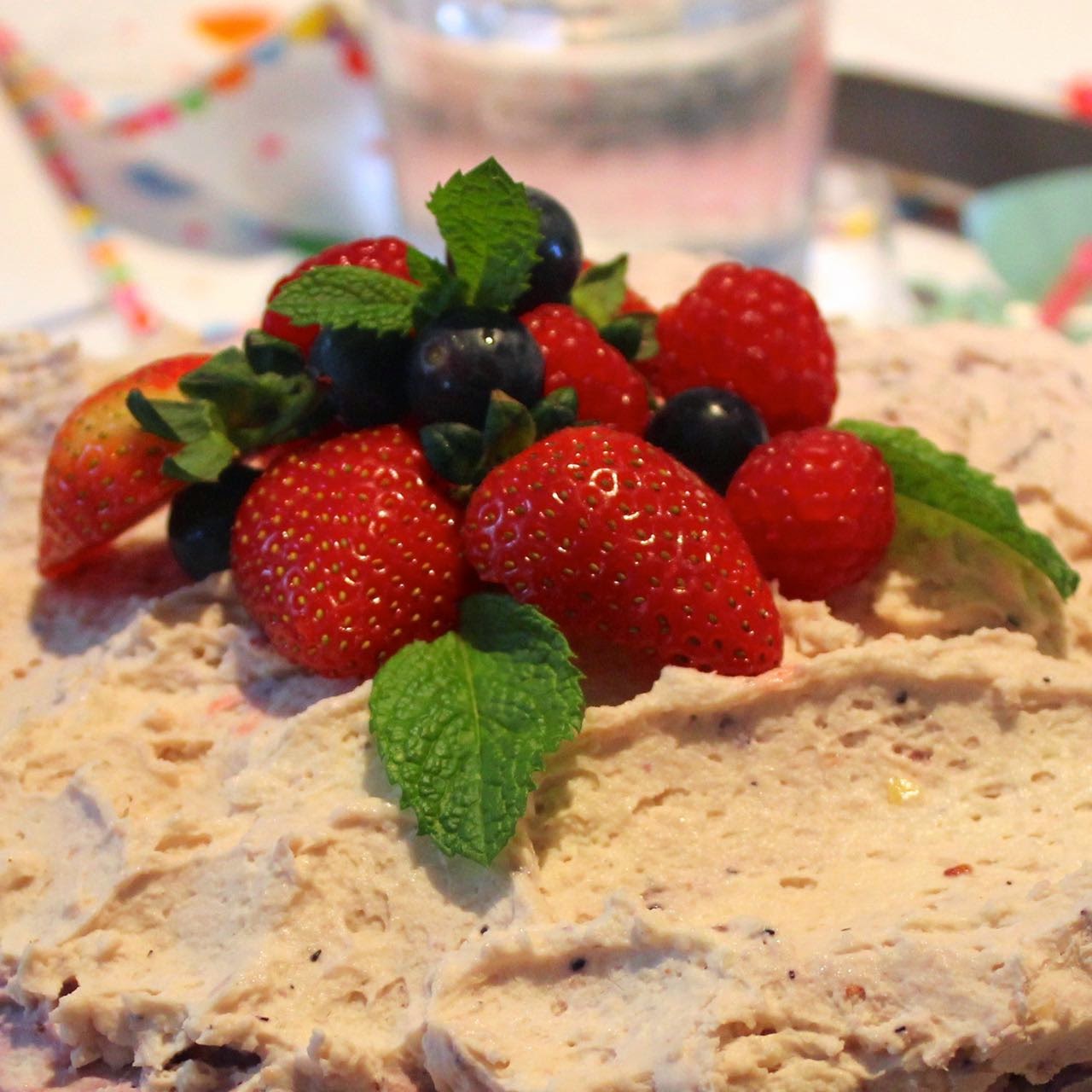 I had asked Susie to bring some fresh mint when she came in the morning and she bought a bagful.  The green leaves were the finishing touch needed with the berries on top of the cheesecake.  With the layers of berries it looked impressive.

However there was a problem.  We followed the recipe.  This involved freezing the cheesecake overnight and moving it to the fridge 30 minutes before serving.  It was frozen so hard that we could barely slice it.  We had reduced the sugar which made it not sweet enough when frozen.  The recipe for the cheesecake intended it to be frozen like ice cream but I would not serve it this way again.

While it looks better when sliced as a frozen cheesecake, it tasted so much better when kept in the fridge rather than the freezer.  In fact while I loved the vanilla cheesecake I found the cream cheese really heavy and much preferred the lightness of ricotta.  I did notice that the top layer was quite creamy but the other layers with lots of berries were less so. 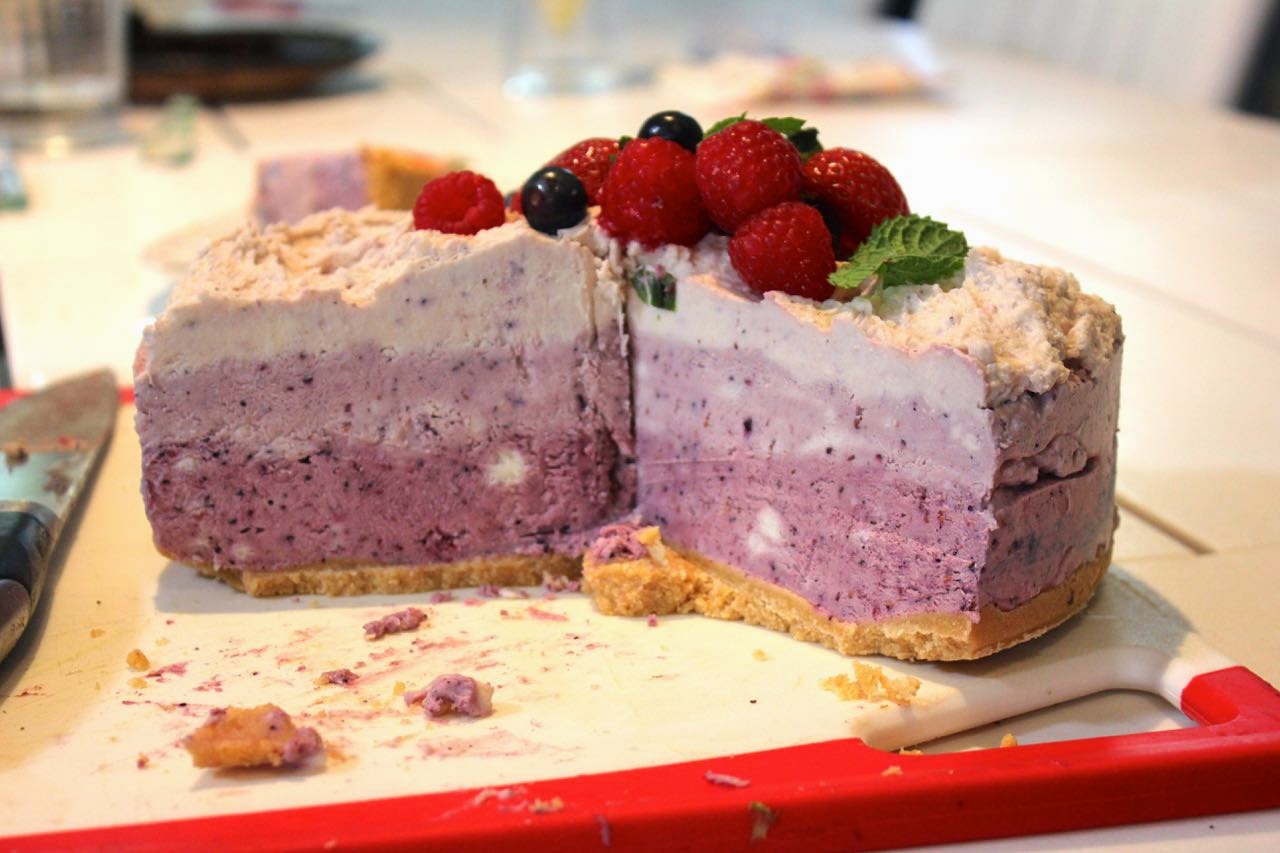 We had so much for sweets - chocolate cake, two cheesecakes, rocky road crunch and fruit.  As well as enjoying sweets we had also saw the kids video presentation, my dad made a speech, Dave took a family photo and the kids made another couch house. 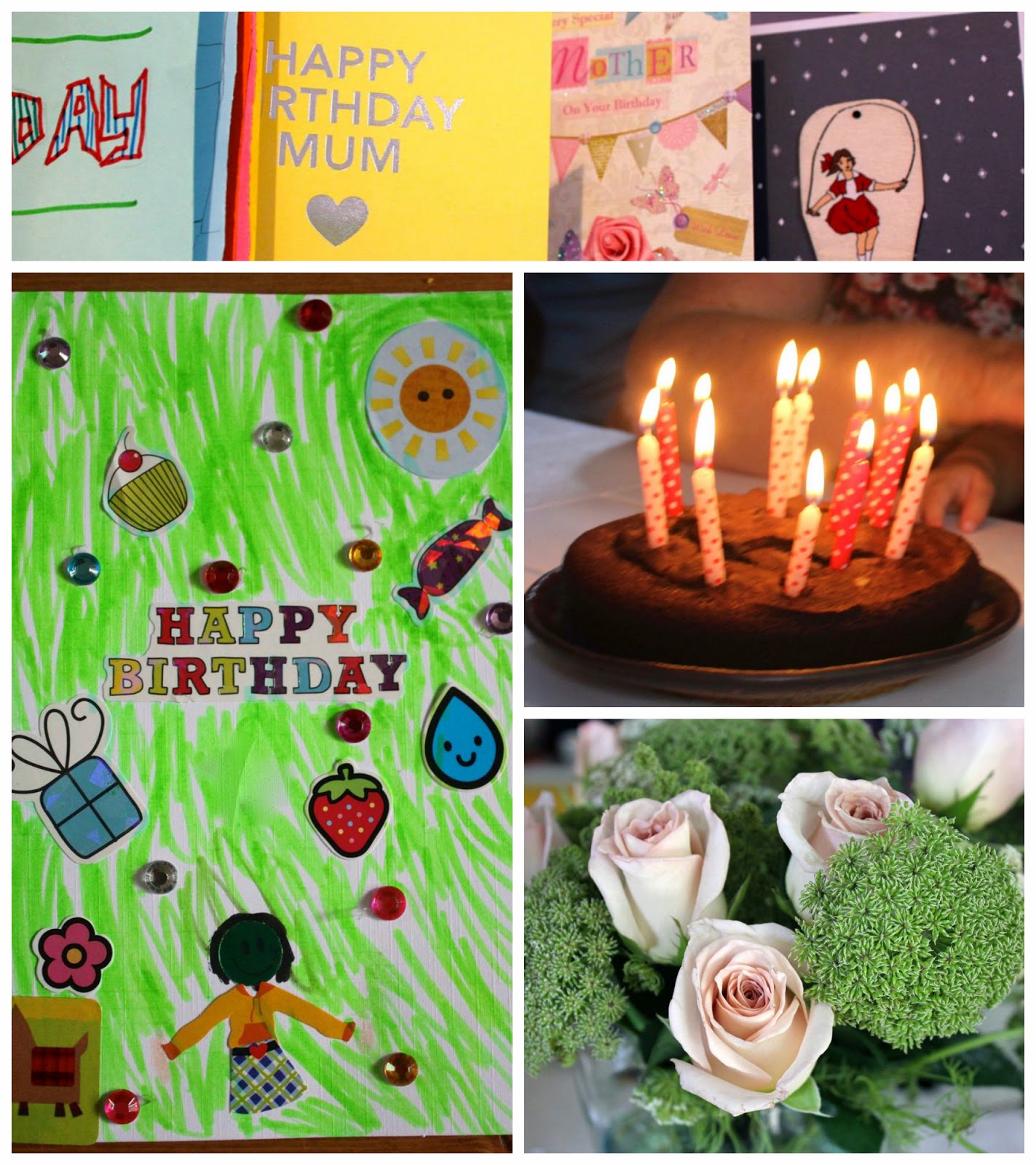 When most of the family had left and the kids were happy playing, it was too cold for everyone to go to the beach but I was game.  So I went for a solitary walk along the edge of the sea.  The rhythms of the waves is always relaxing and time to let my thoughts wonder is a rare pleasure.  With windswept hair I left the beach reluctantly only to be amused to encounter a woman in a toga and another in a native American Indian feathered head dress! 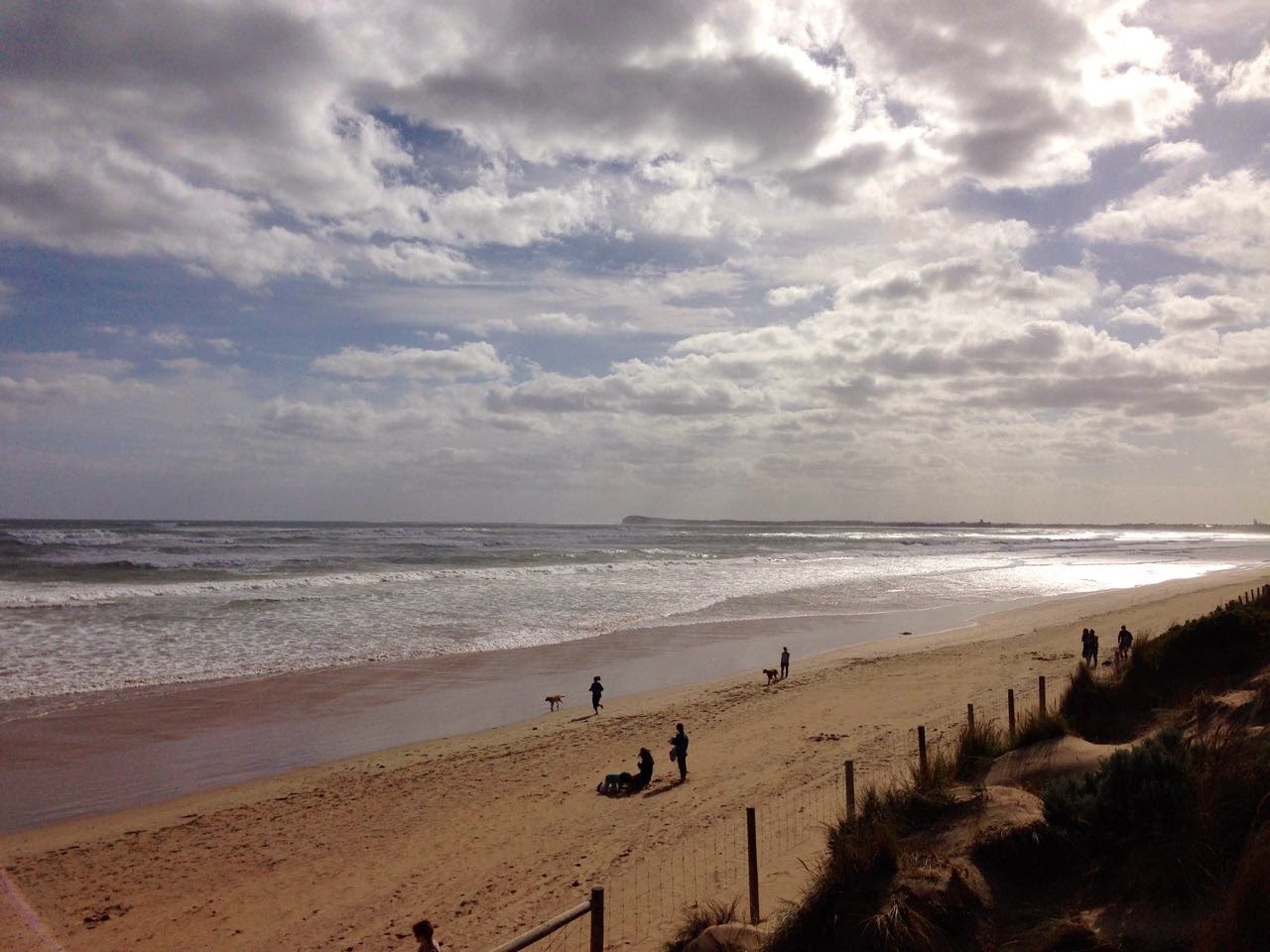 My mum's birthday lunch was a great team effort with lots of plans, emailing, baking, cleaning, whispers, chopping, roasting, singing, laughter, shopping, drawing, texting, carrying, gifts and stacking the dishwasher to make it happen.  It was a busy day with so much food that we didn't need much for dinner, but my mum wouldn't have had it any other way!

I am sending this cheesecake to Jibber Jabber for her monthly blog event, Love Cake.  This February the theme is For the Love of Cake as in romance and birthdays.  This cheesecake looks perfect for Valentines Day but it serves so many that it is not quite right for an intimate dinner for two.  It is better for birthdays or even an Australian Christmas dessert.

Crush biscuits into crumbs and mix with melted butter.  Press into prepared tin.  Chill to firm up.

Beat the ricotta with sugar with electric beaters.  (Our ricotta was from the deli (not from a tub) and was thick so it didn't get really creamy.)  Beat cream in a separate bowl until stiff peaks form.  Gently fold cream into ricotta.

Divide ricotta mixture into three bowls.  Mix 1 cup of the berry puree into one bowl, 1/2 cup into second bowl and 1/4 cup into third bowl.  (We had to tweak slightly to make sure that there was a noticeably colour difference between each layer.  A little more in the darkest and a little less in the lightest.)  Any extra puree can be set aside for serving

Spread the darkest colour over the chilled biscuit base.  Meanwhile place the other two bowls of mixture in the fridge.  Set in freezer for at least 2 hours or until firm.  (Ours took longer.)   Once firm, spread the medium coloured layer on top.  Return to freezer until firm.  Spread remaining layer on top.  Freeze overnight.

Remove from freezer to fridge on the day of serving.  This cheesecake was best chilled rather than frozen but if you want it frozen, it still needs to thaw for longer than the 30 minutes that the AWW suggested.  Arrange berries and mint leaves on top just before serving.  Serve with any remaining berry puree.

On the Stereo:
Fidel's Ocean Grove Quintet
Posted by Johanna GGG at 13:22