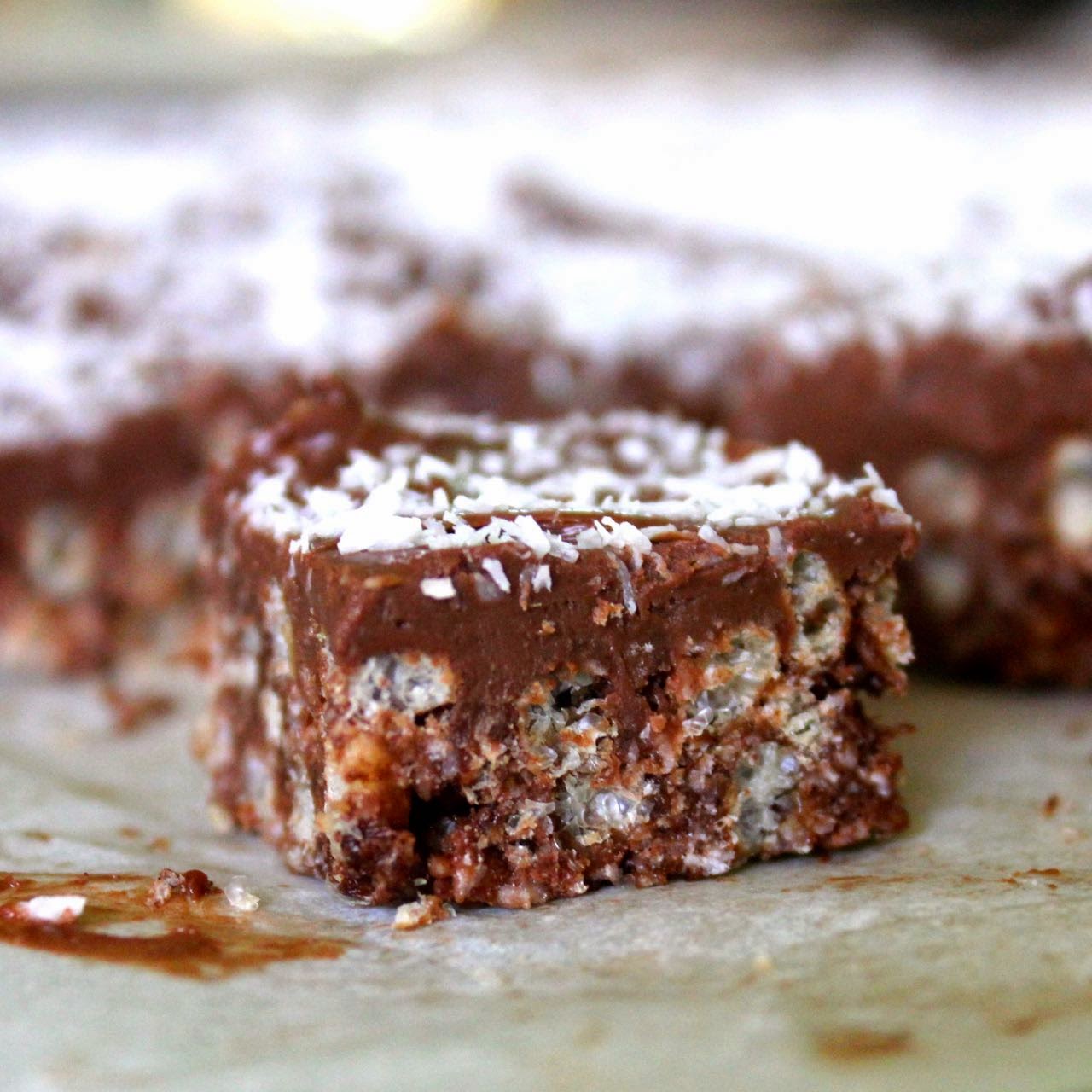 We were at the supermarket check out on Monday and Sylvia found there was a jar of Nutella in the trolley.  I acted all innocent.  But she was onto me.  Anyway I had an excuse.  It is World Nutella Day today.  When I told her yesterday that it was all used up in a slice she frowned.  Until she tasted a piece.  Then all was forgiven.  Yes, it is so delicious that it is even better than eating Nutella from the jar! 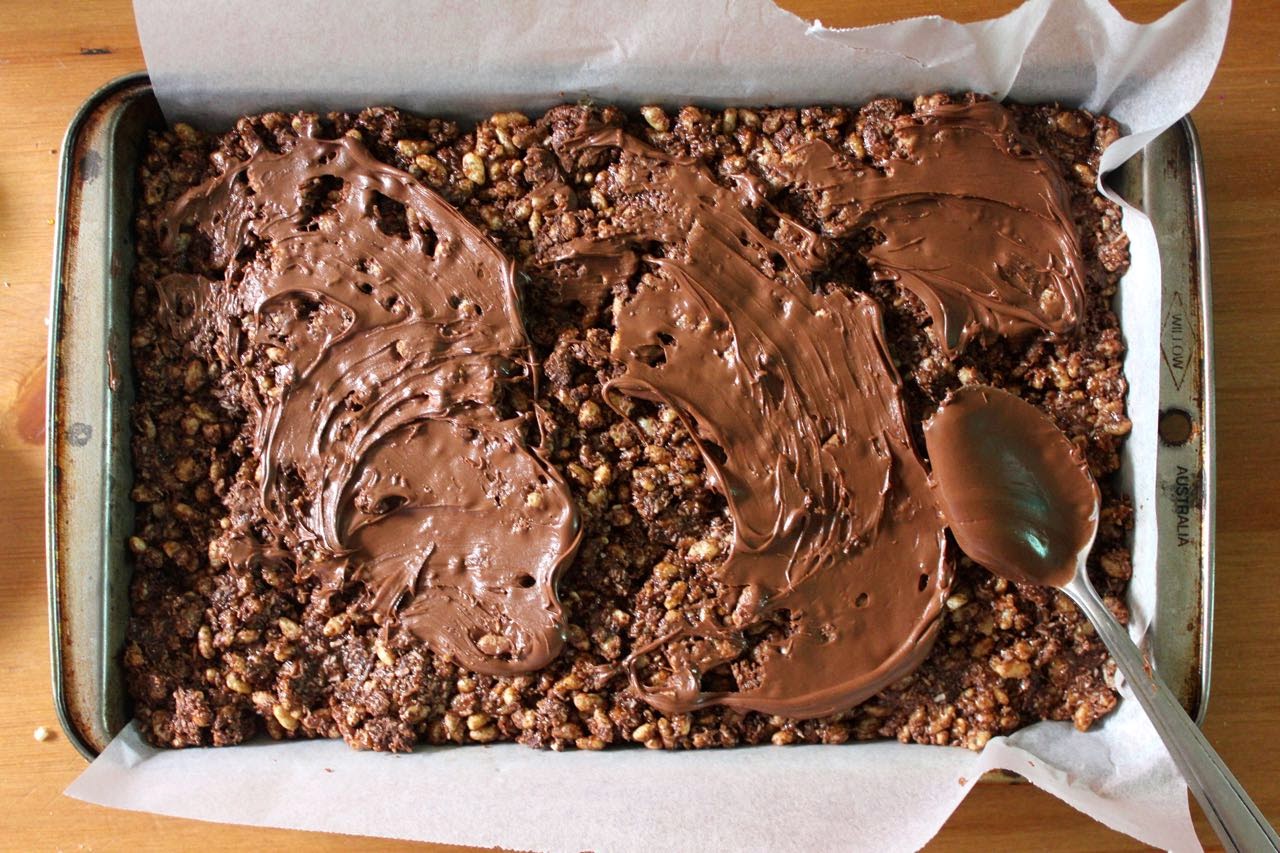 So the slice is a bit of a Frankenstein's monster with inspiration from all quarters.  Inspiration came from classic Australian childhood treat, chocolate crackles; from a vegan version of the American rice krispies slice; and from a healthier chocolate almond rice bubble slice. 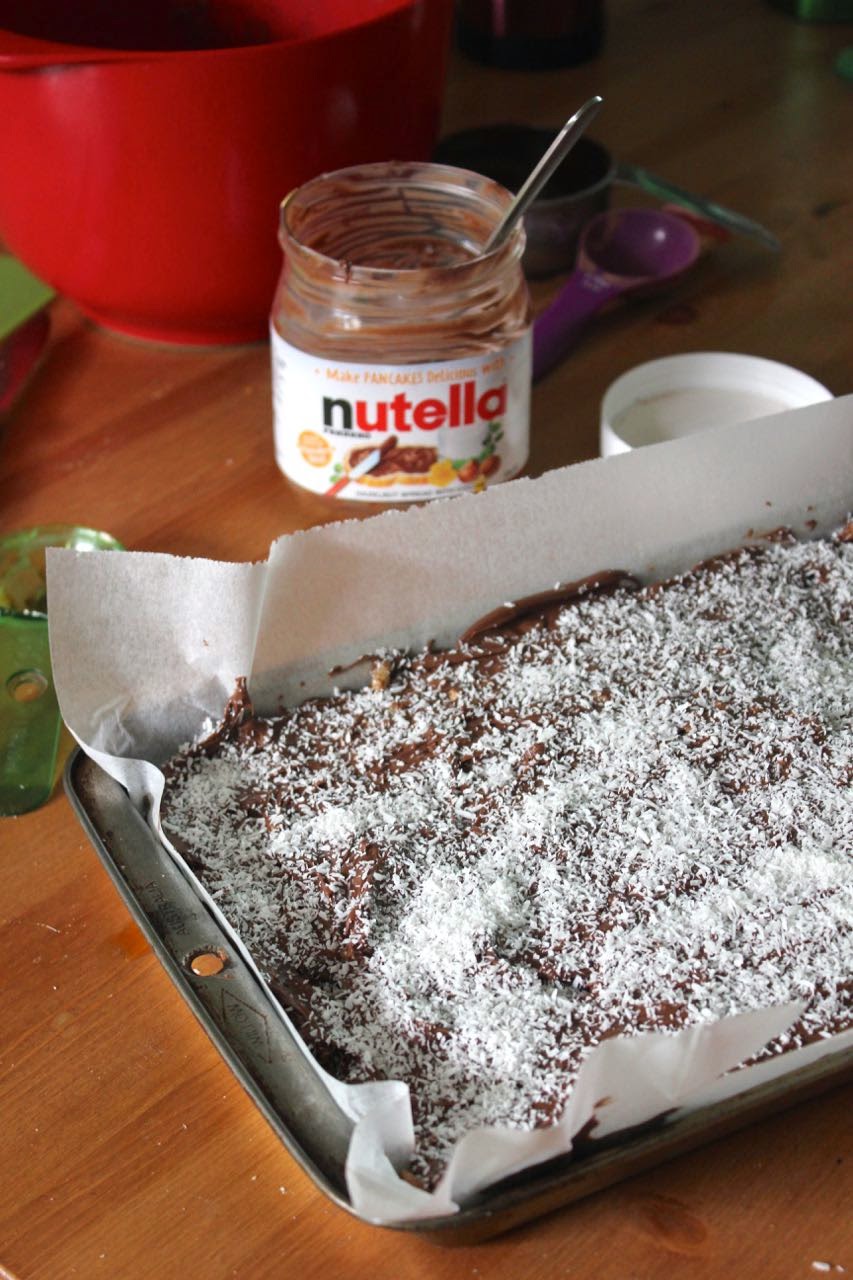 You might notice that I wasn't seeking out and out decadence this year. I added a little rice malt syrup for binding which I have used before instead of marshmallows.  It has some of the stickiness without being so sweet and no gelatine to avoid!  The slice also has lots of coconut because I love it and we were low on rice bubbles. 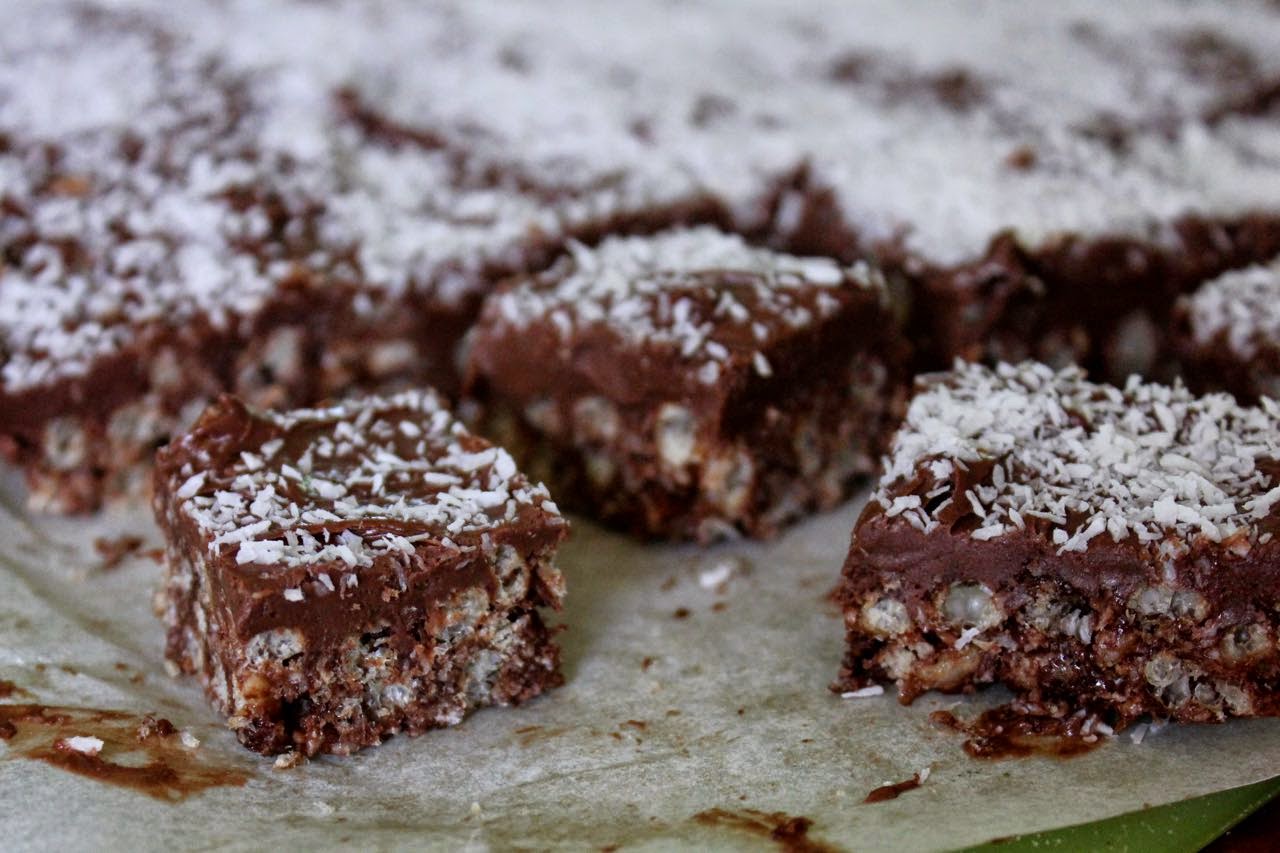 I thought of mixing chocolate with the topping but we only had a 70% dark chocolate which might have swamped it.  It did occur to me that to make this slice really decadent, I could top it with half the mixture from this nutella fudge.  I have also wondered if it might work with chocolate and cream/butter instead of nutella.  However then I think these are crazy thoughts because this slice is so good that it is hard to stop at one square. 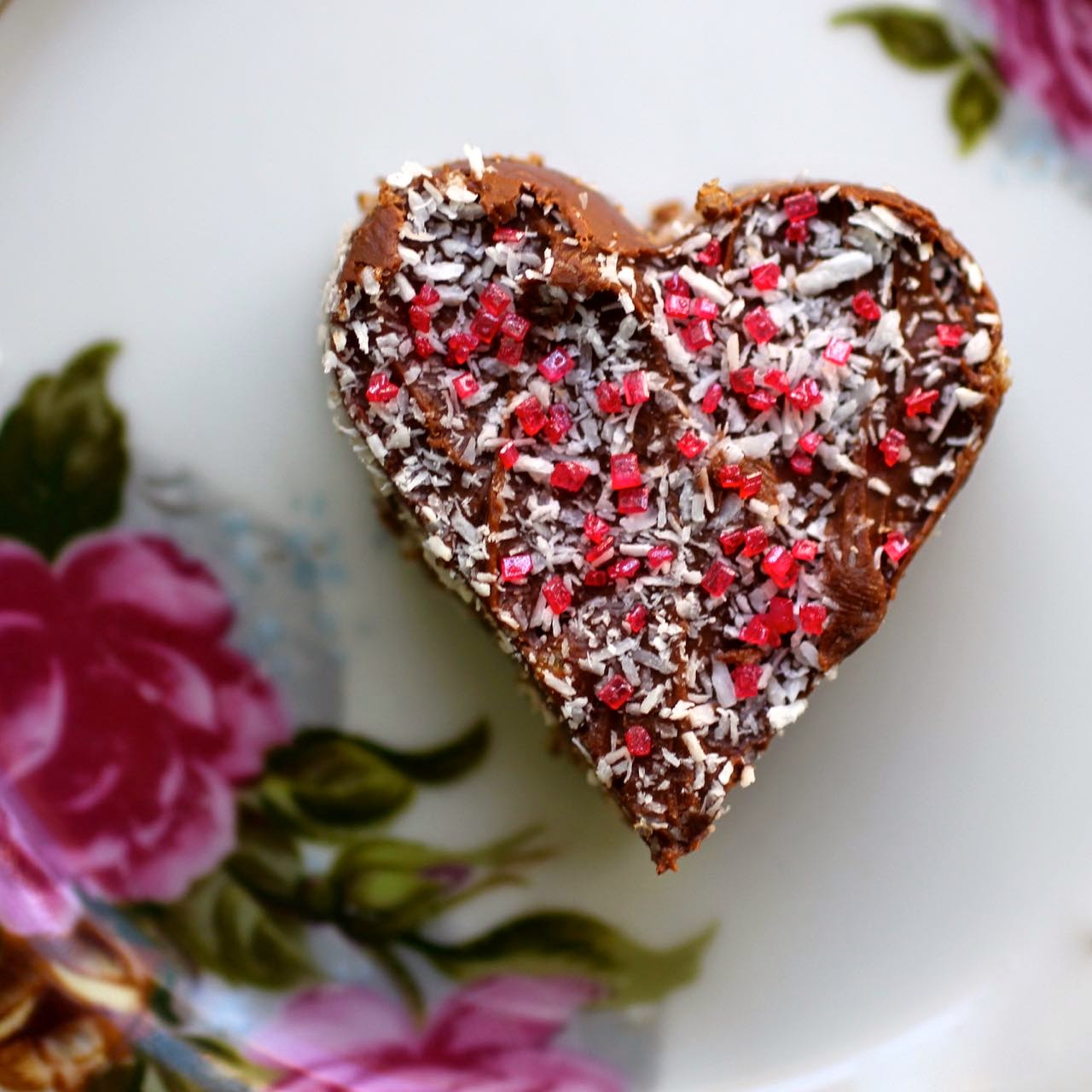 As well as it being World Nutella Day, we all know that Valentine's Day is looming large.  On the way to school today, Sylvia and I passed a shop window that is suddenly all hearts and red satin!  I am sure you have had a few prompts too.  If you want to treat your loved one or yourself on Valentine's Day, especially in Melbourne where unbaked treats might be welcome in the coming heatwave, then it is quite easy to cut out heart shapes and sprinkle these with a little red sprinkles!

I am sending the slice to The Baking Explorer (and Cakeyboi) for Treat Petite with the theme of Love in the Air.

I am sending this to Ms Adventures in Italy and Bleeding Espresso who founded World Nutella Day in 2007 just because they love it.  Check out the World Nutella Day site for lots more fantastic Nutella recipes.

Gently stir together butter, golden syrup and rice malt syrup in a large saucepan.   Remove from heat and stir in 1/2 cup of Nutella.  Gently mix in rice bubbles and coconut.  Press into a lined slice tin (28 x 18cm) using hands if necessary.  Spread with remaining Nutella.  Sprinkle with coconut.  Chill in fridge until firm.  Cut into squares.  Store in the fridge.

On the Stereo:
Yes Virginia... The Dresden Dolls
Posted by Johanna GGG at 10:34