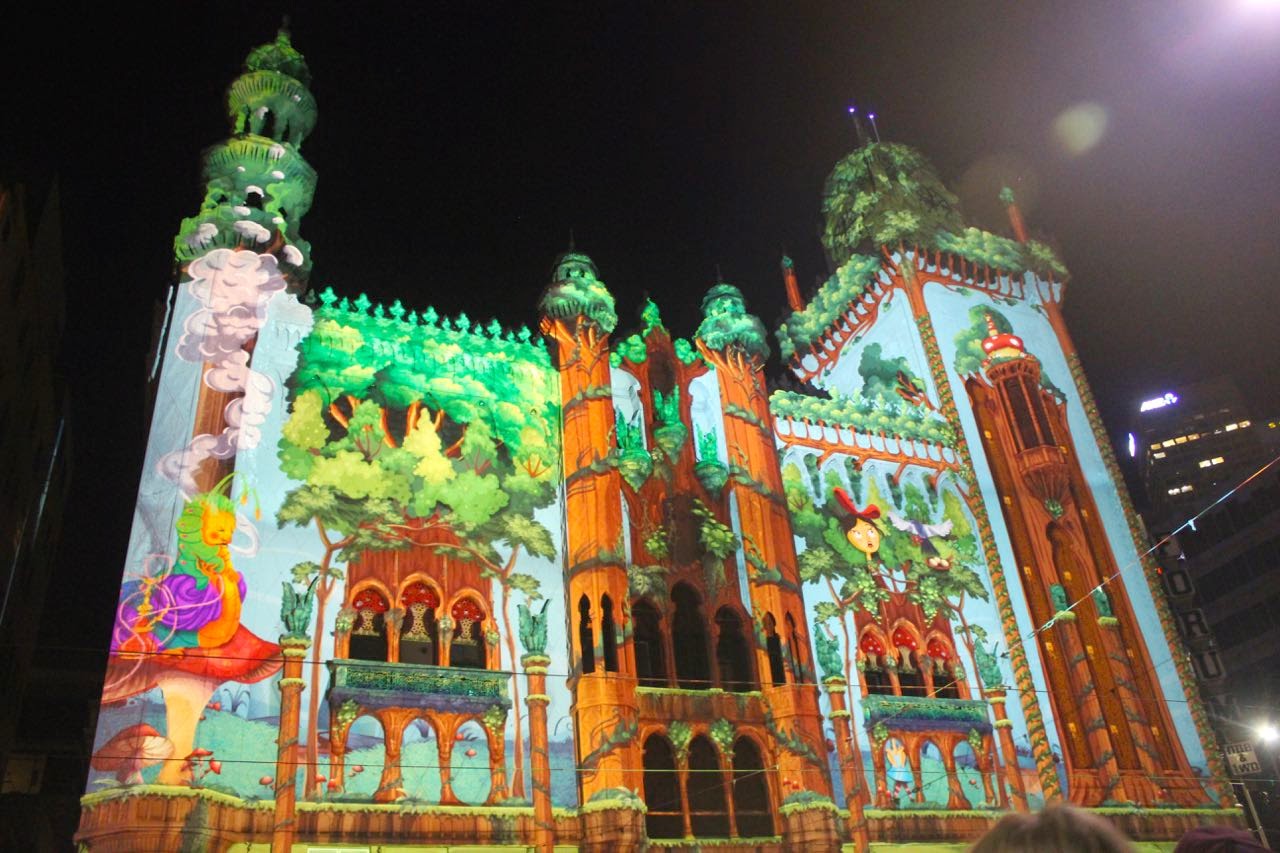 What is not to love about White Night!  The spotlight is on Melbourne's magnificent buildings and it is a fun colourful spotlight.  The streets are closed to all traffic and open to pedestrians.  Fortunately after the thunderstorms, the weather cleared and was a pleasant balmy 31 C.  I was really glad to be one of the crowds to enjoy the beauty in a relaxed atmosphere. 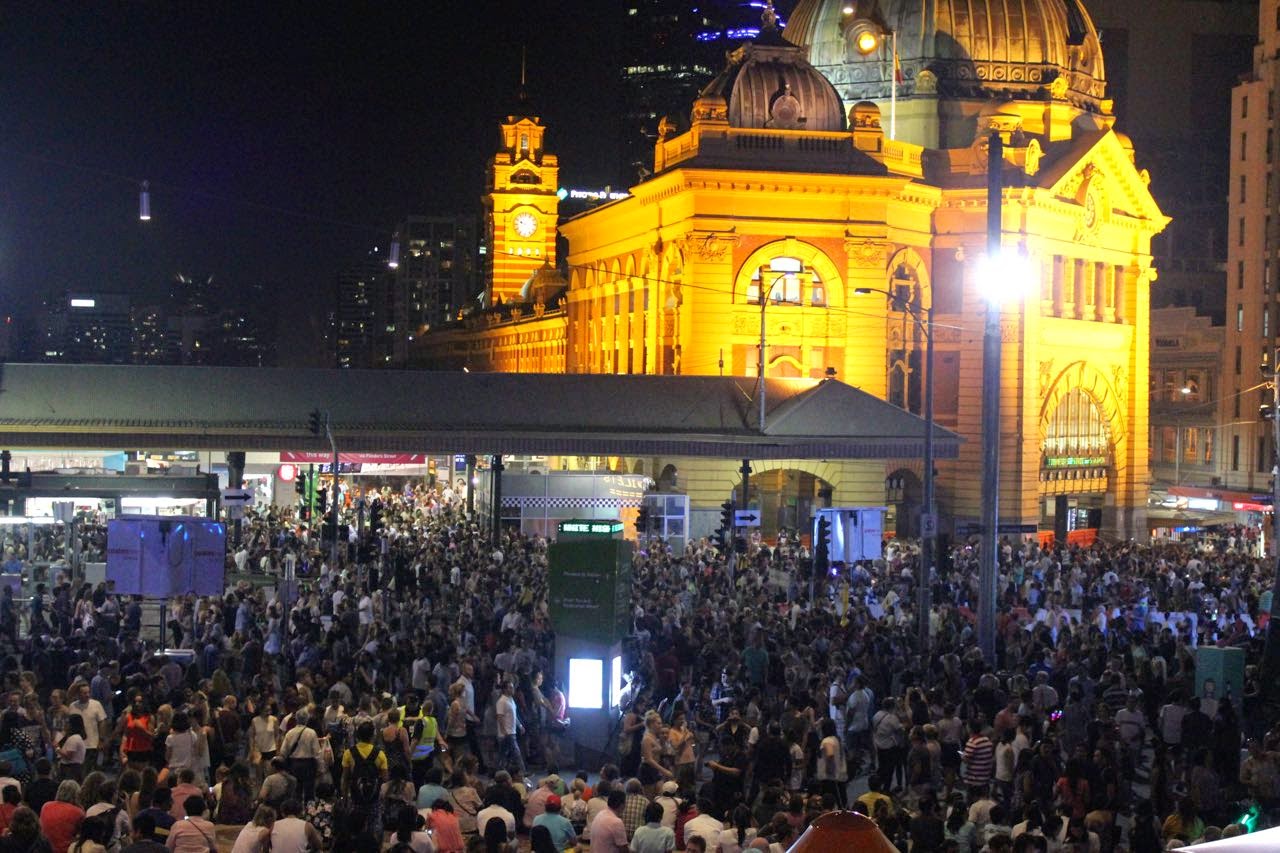 I took the train to Flinders Street Station where the crowds streamed through the ticket barriers. (Though there were lots of people, it was easy to walk along the streets and I actually found the crowds a lot less packed than I had thought they might be.) 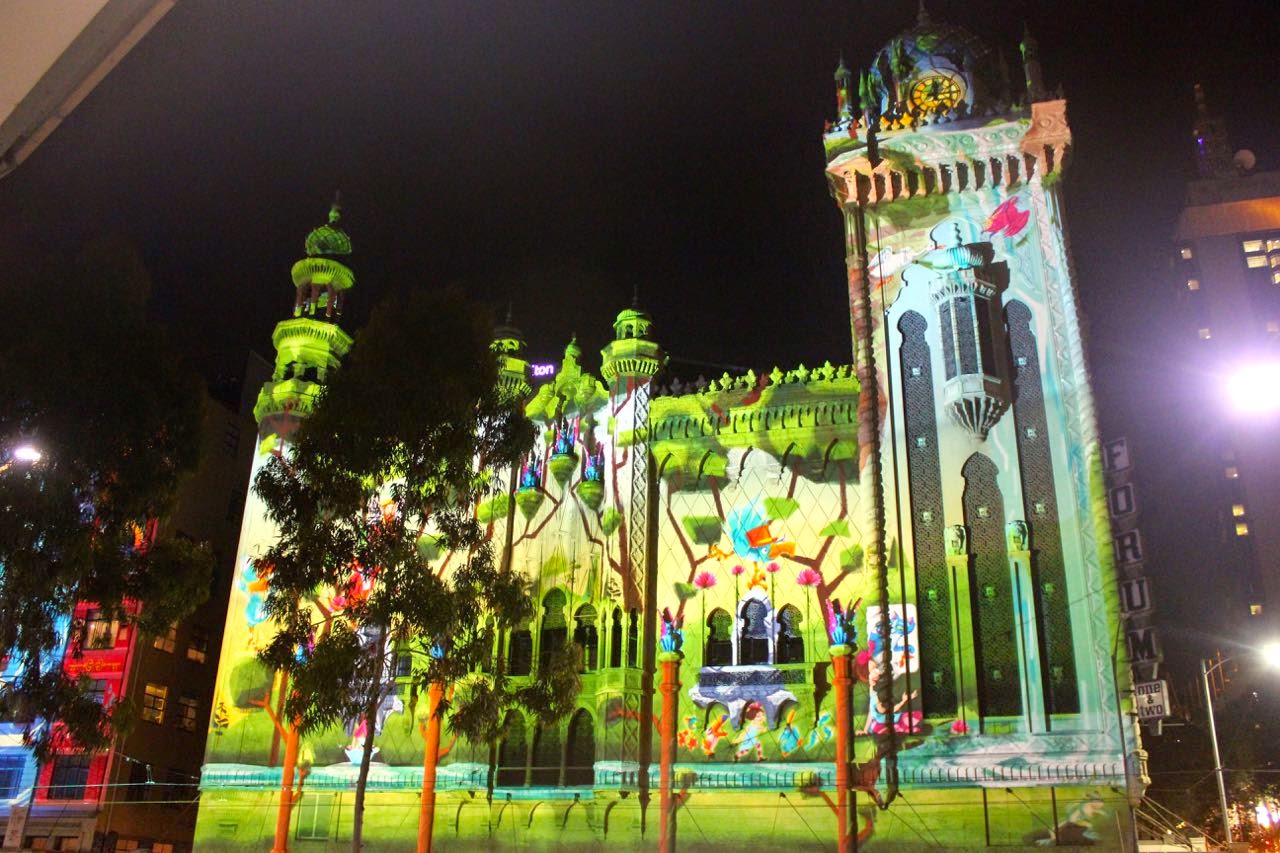 A short walk up Flinders Street found me amazed at the projections with the theme of Alice in Wonderland (to celebrate the 150th anniversary of the book).  I once studied the book as an undergraduate and love its dreamy weirdness. 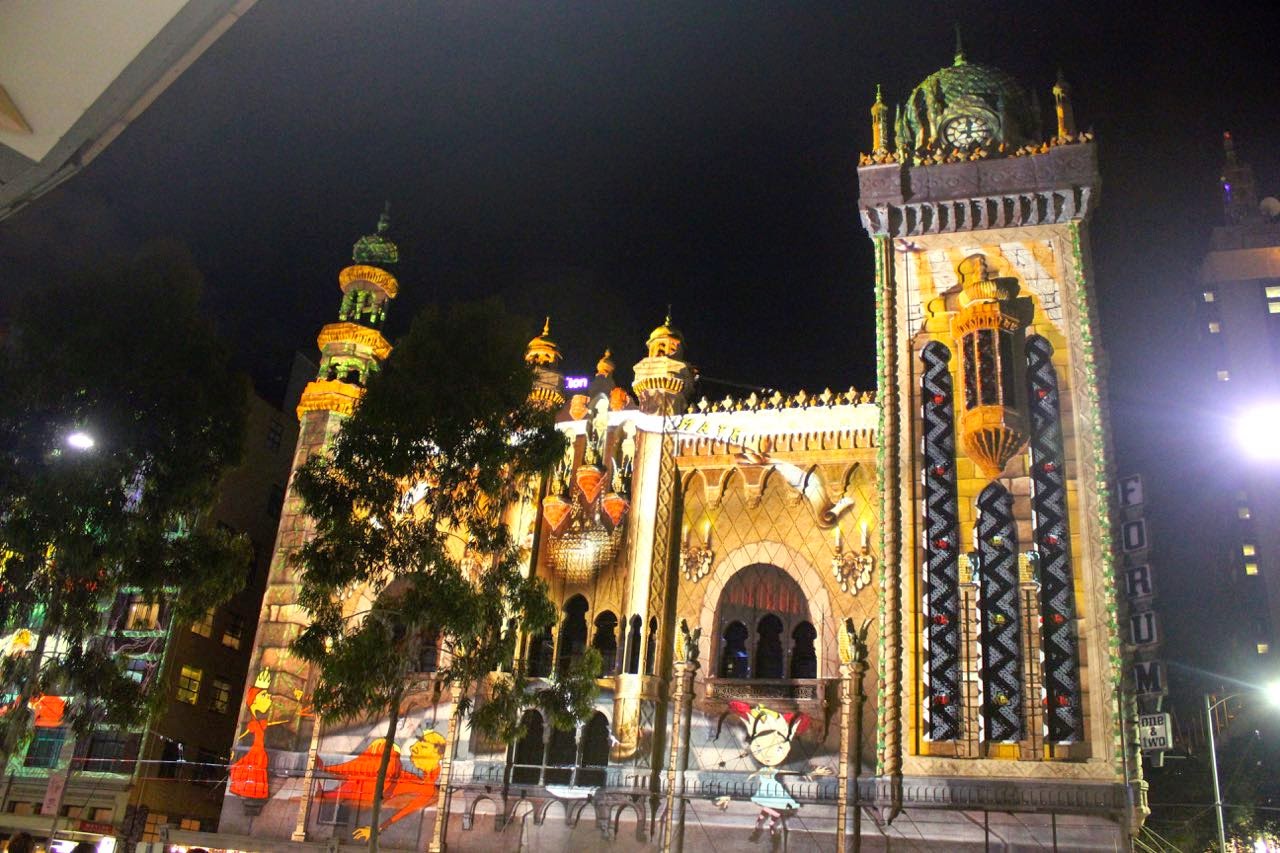 It didn't take long to see that the projections changed regularly.  Which meant that the crowd stayed to watch and moved slowly rather than rushing by.  I particularly loved the projections on the moorish style Forum Theatre, an amazing old building with griffins, keyhole windows, domes, and cupolas.  The features were all built into the design. 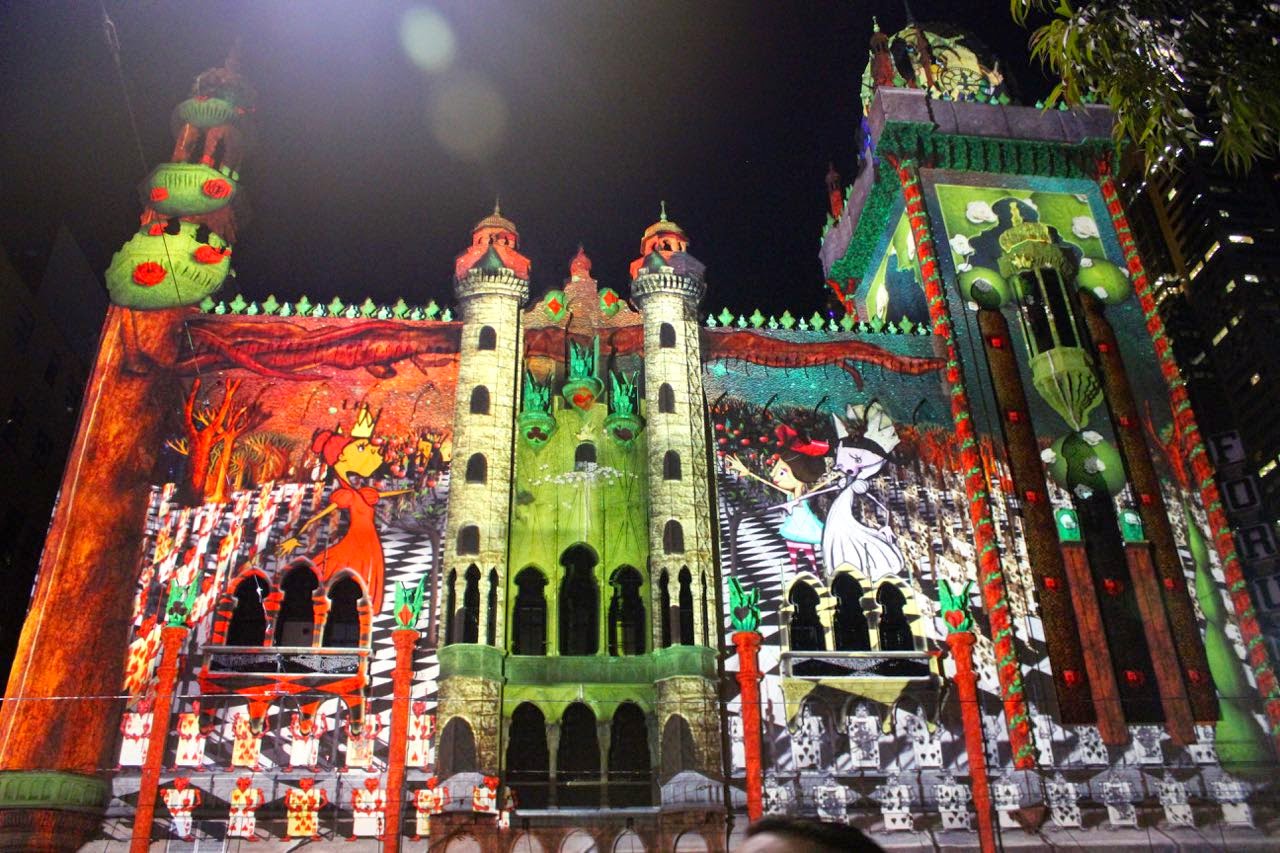 I stayed about the Forum for a while, marvelling at the projections.  It was fun to just watch the crowd's reactions to the lights, especially the anticipation when the lights dimmed before a new projection. 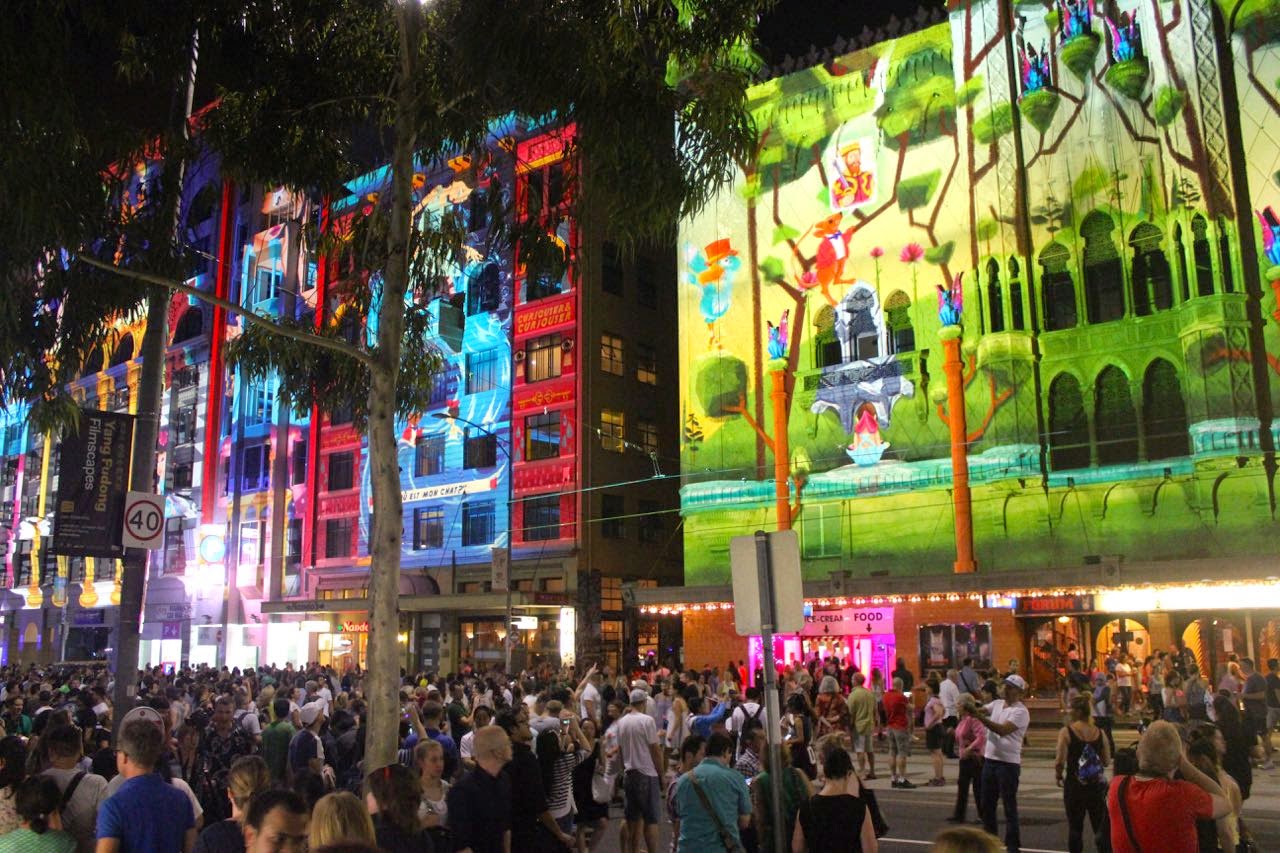 Spending time waiting for new projections, also gave me time to look at the details. 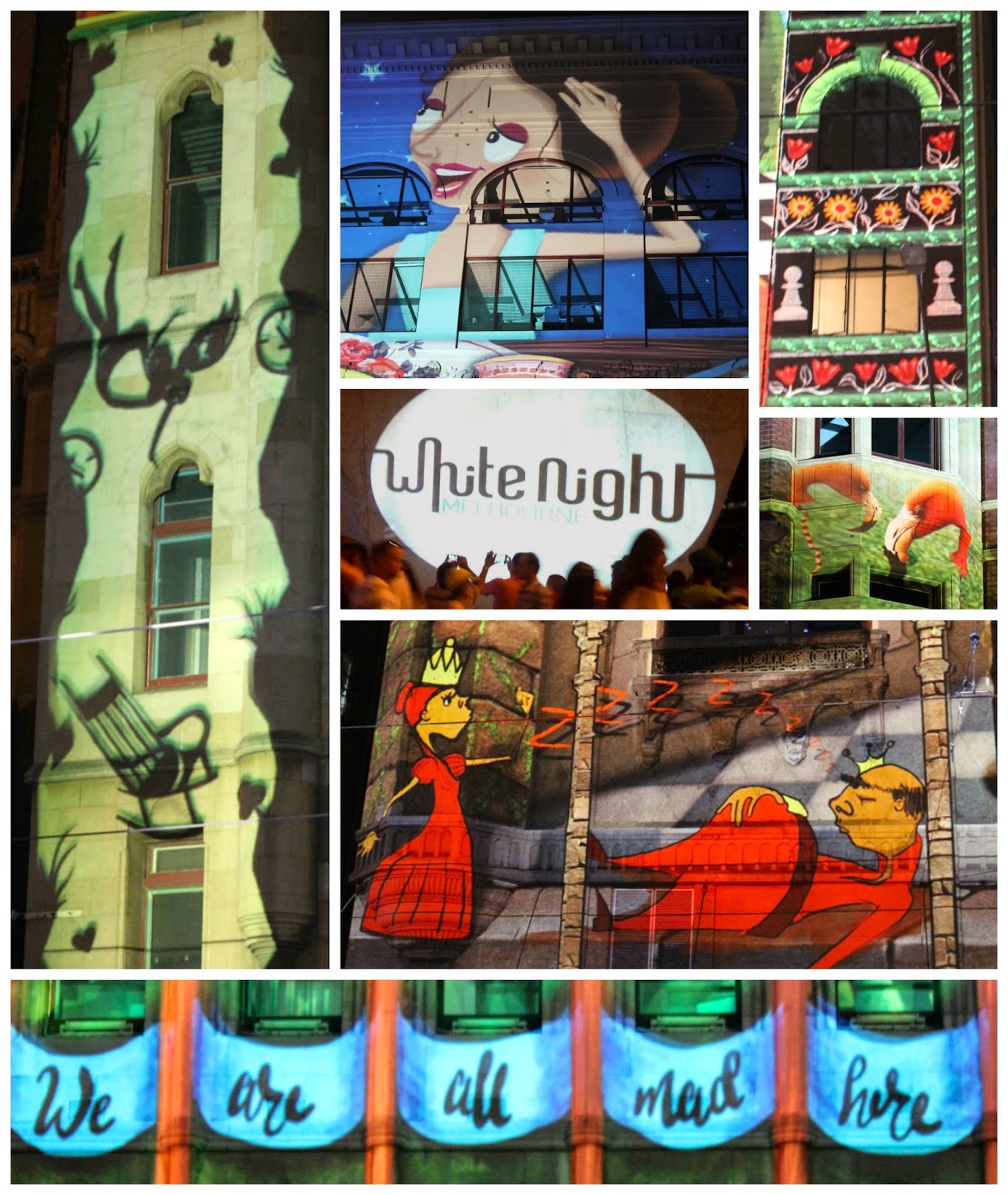 I could have stayed watching for hours but my time was limited so I also spent time walking along the other buildings in the row. 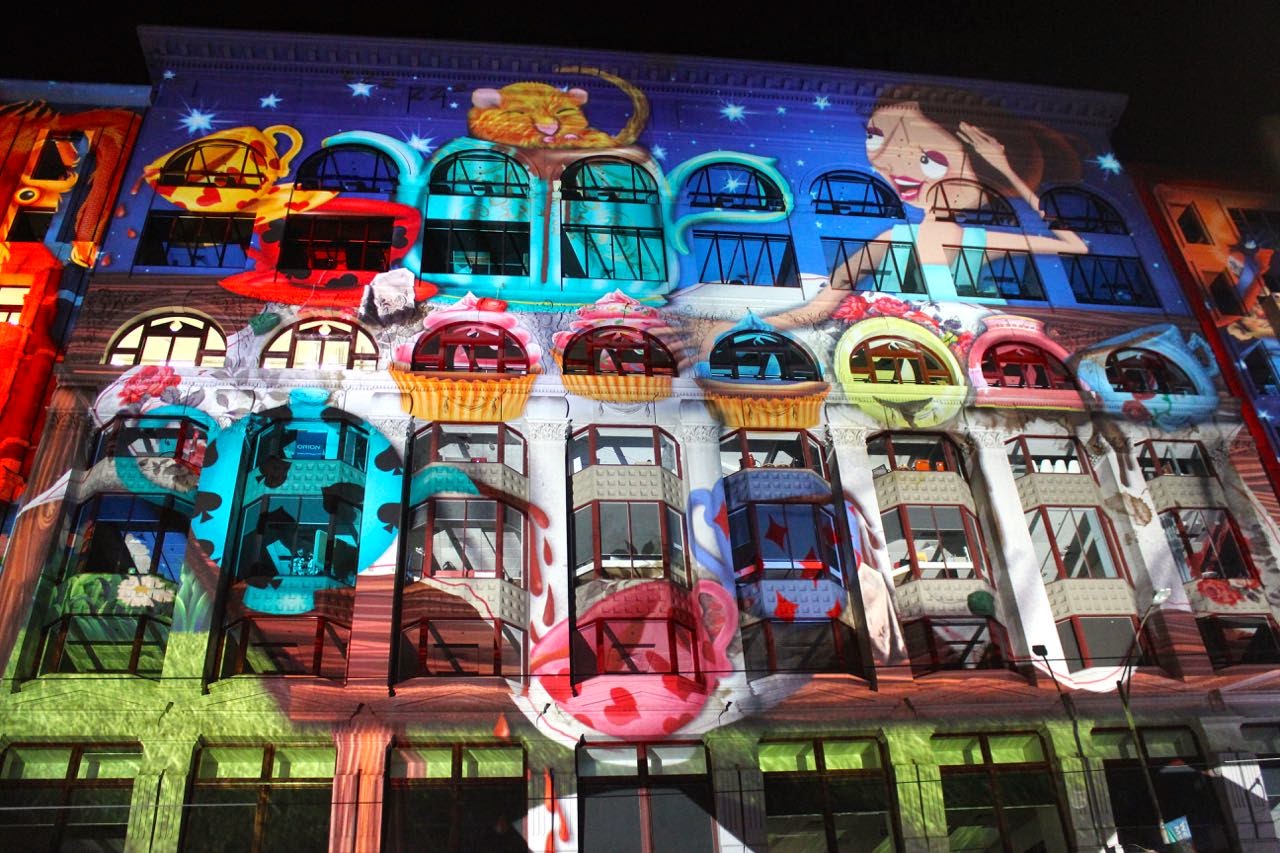 One of my favourite other projections was the black and white projection below.  Walking up the steps to Federation Square gave a great view of the building and the crowd. 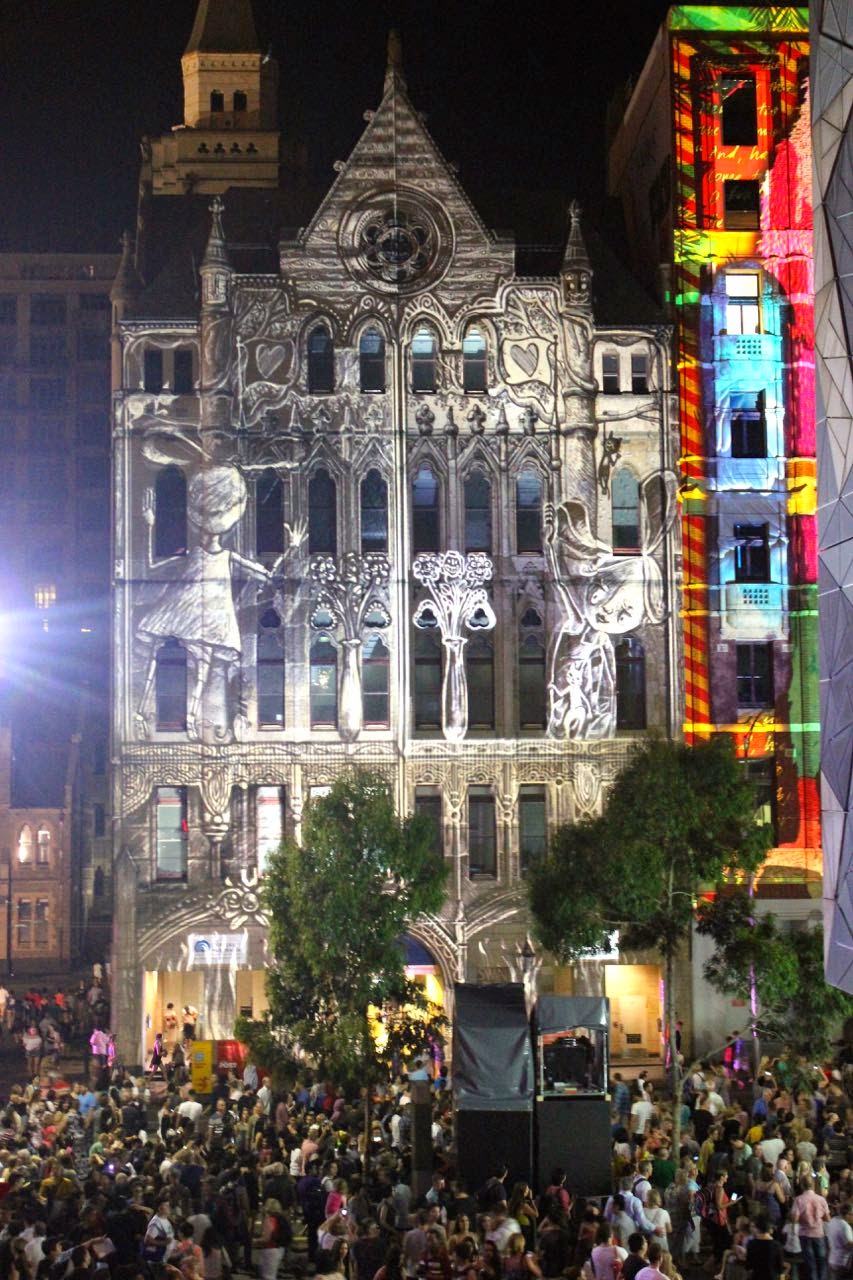 Federation Square was lit up with coloured lights and was heaving with crowds.  I overheard someone remark at the crowds without any cost.  Yet all the bars and cafes around the river and Federation Square were doing a roaring trade.  There were also lots of food trucks about. 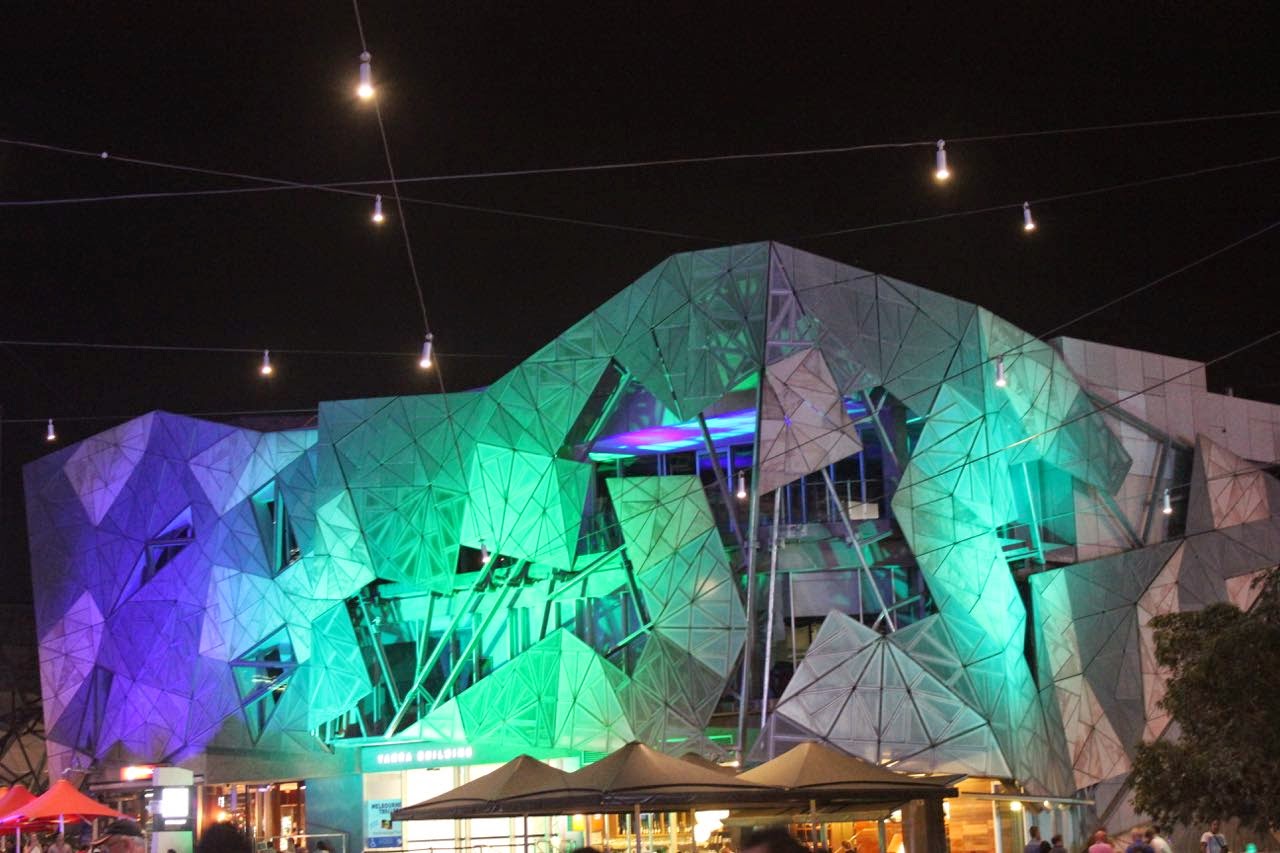 I didn't stay long enough to stop for food.  My time was limited as I had a busy day on Sunday and couldn't stay out late.  I walked along Swanston Street towards the National Gallery Victoria on St Kilda Rd.  It would have been great to go inside if I had the time but instead I watched the Key Frames light show on the moat. 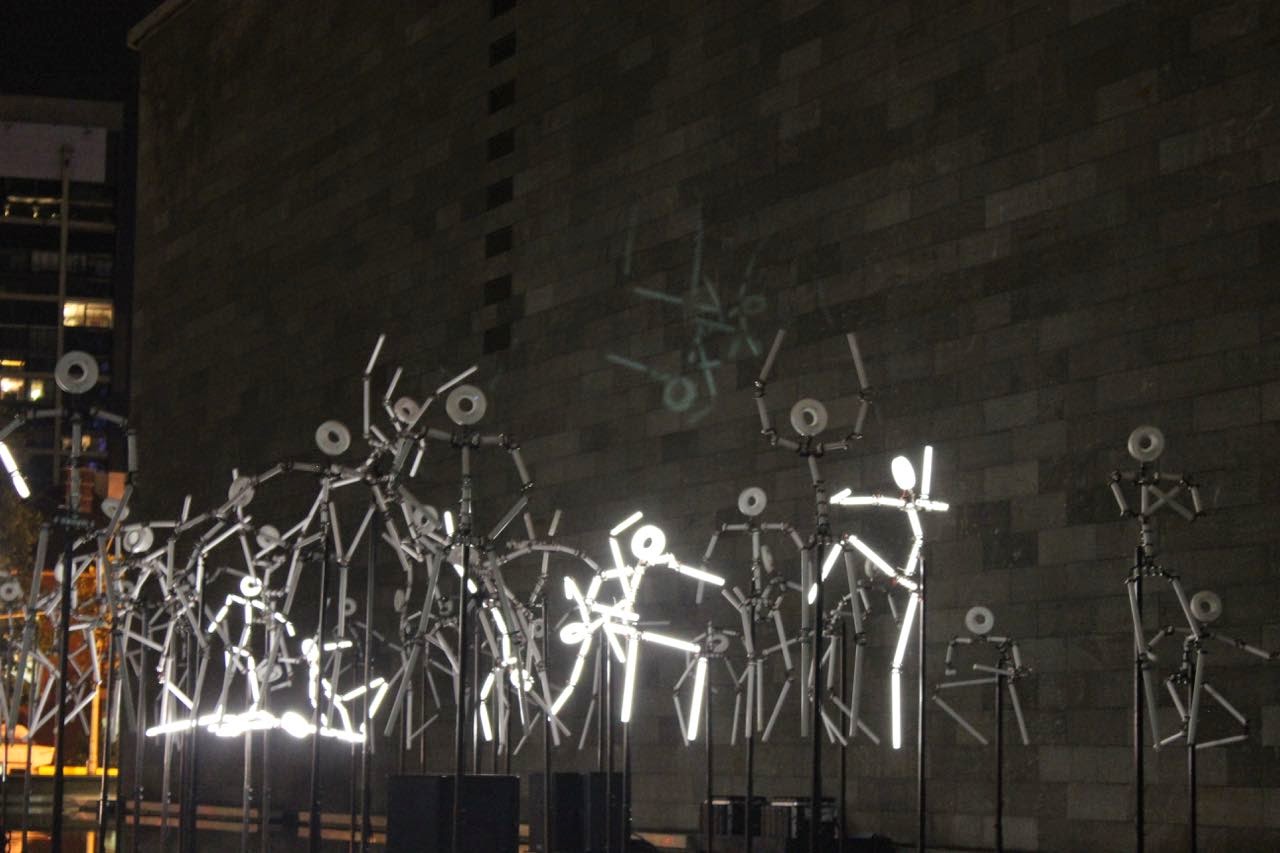 Lots of structures made of industrial-style metal pieces were placed in the moat.  Light projected on to them made the figures look like they were racing or running or moving about. 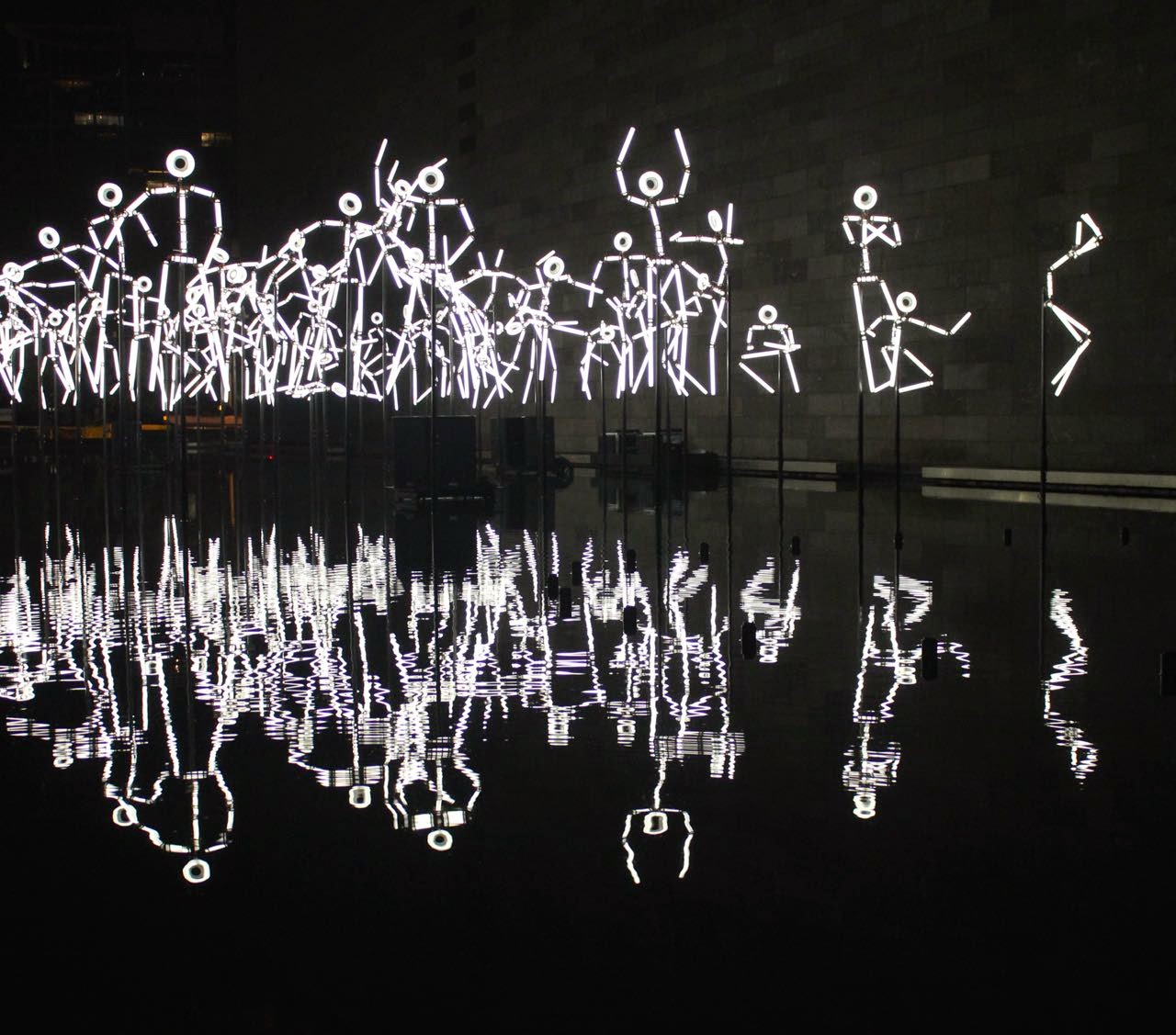 Finally they were all it up together into a crowd of figures.  Then it was time to head back to the station for my train home.  It was a great experience.  Maybe next year I will have time to see more.