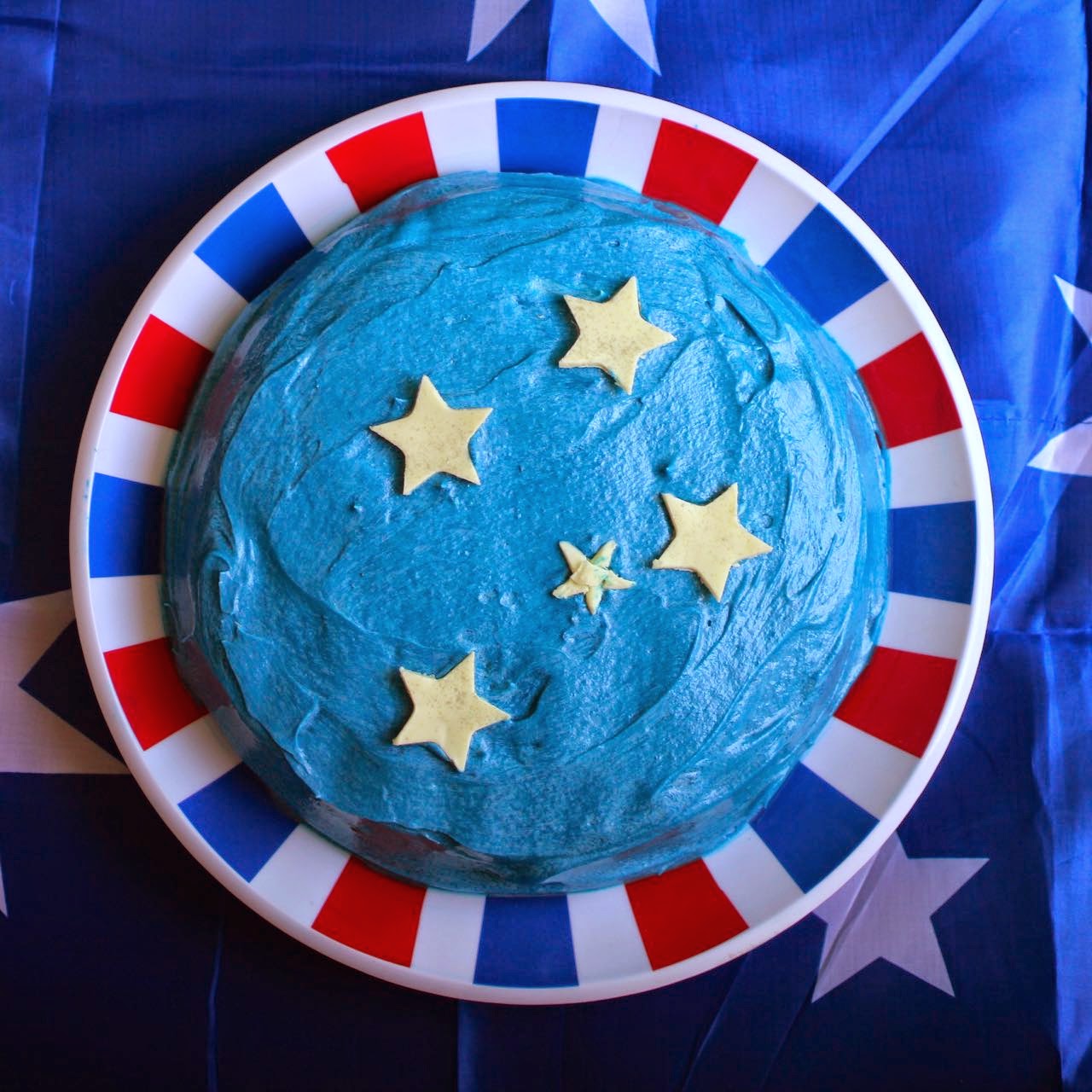 I made sure I had a lovely sandwich for lunch on my birthday.  I baked the bread myself.  And with fresh sourdough bread it was amaaazing (as Sylvia likes to say at the moment)!  Possibly the most successful cooking of the day.  The peach salad was good but the spices weren't quite right for me and while I loved the cake, the Southern Cross decoration didn't look quite as impressive as my vision.  Having said that, I had a lovely day and despite my quibbles I really ate very well. 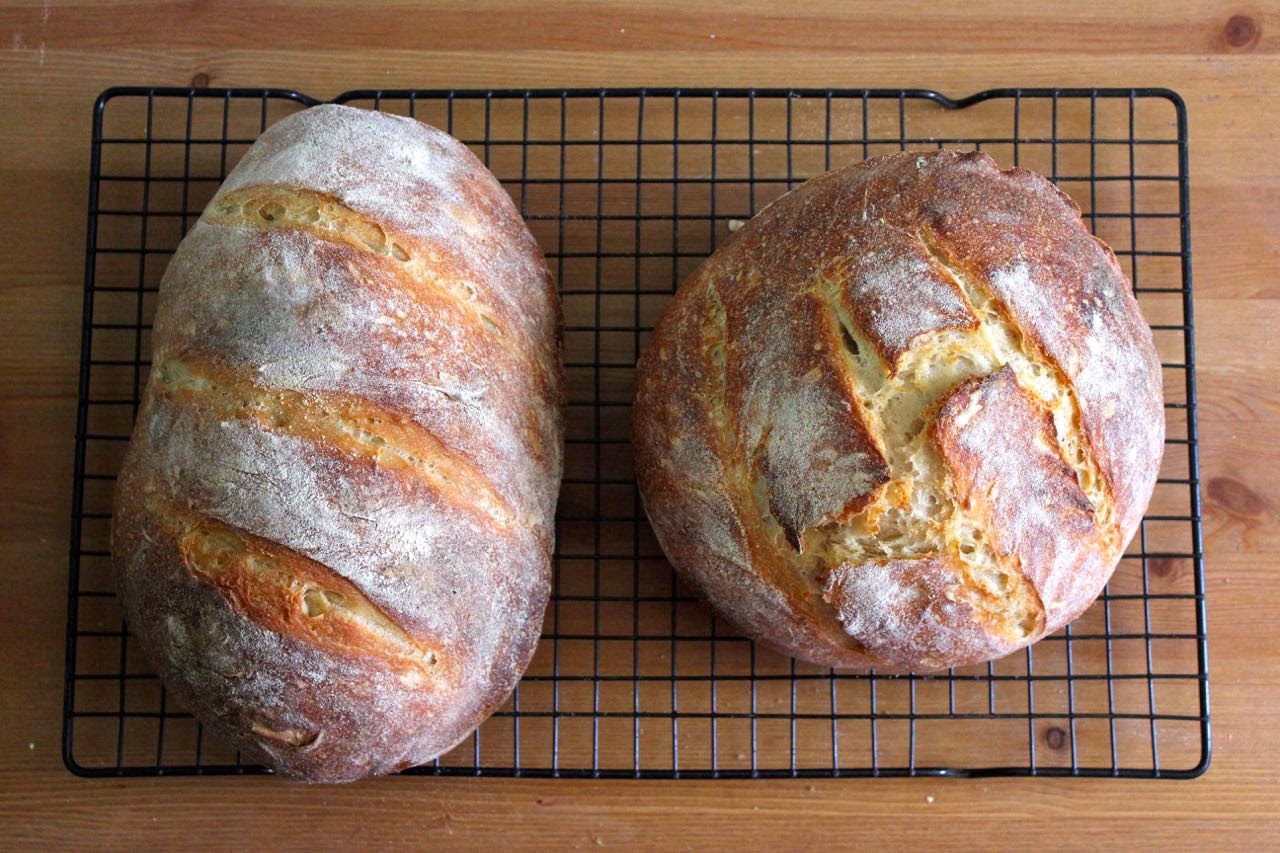 Slashing has been one of the most challenging parts of baking sourdough.  Now I have bought a cheap stanley knife it is improving.  Sylvia and I went to the city to see Paper Planes at the cinema.  It has fantastic scenes of rural Australia.  Beforehand we took our cheese sandwiches to eat on the grass in front of the State Library. 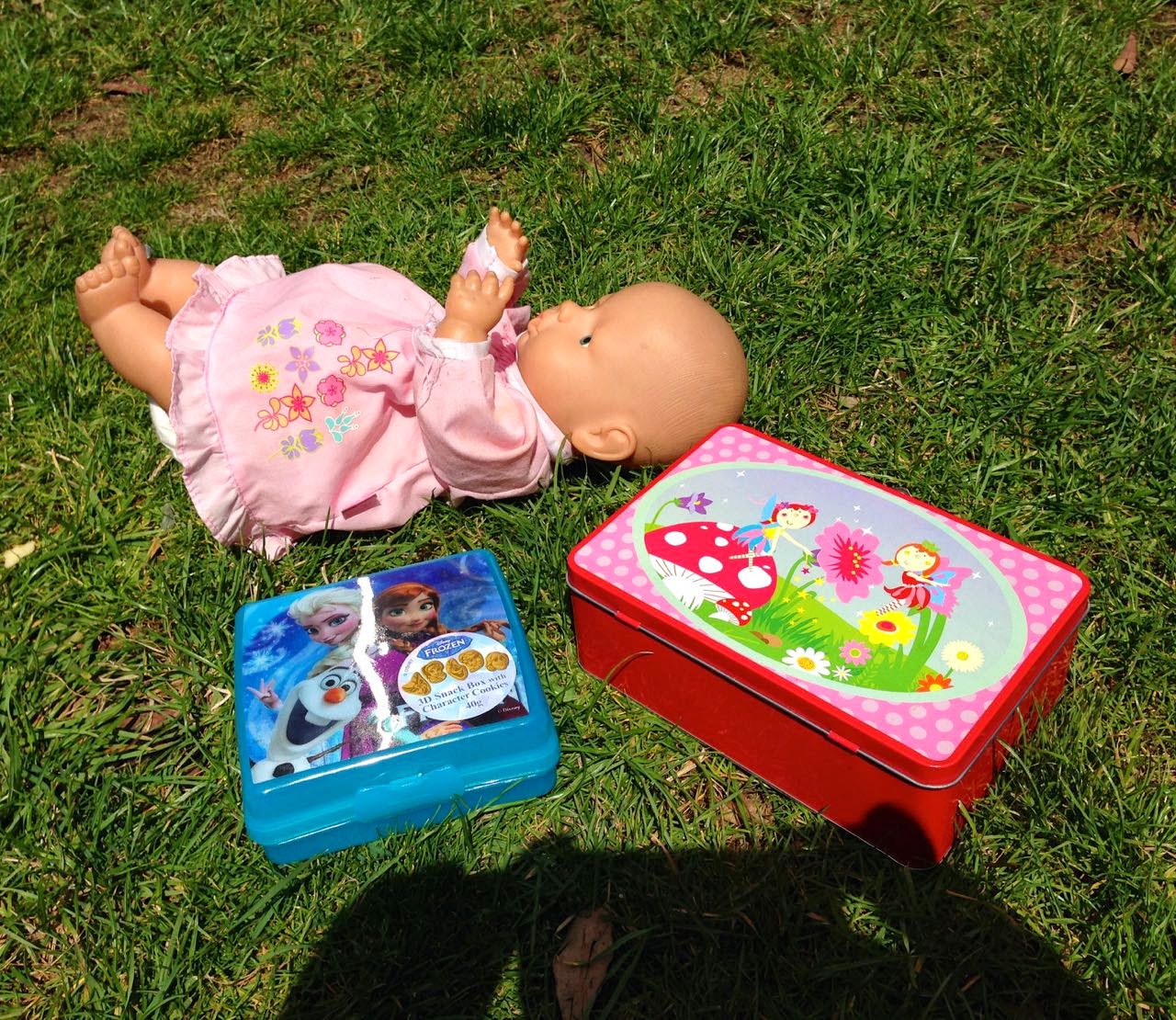 This meant we had recovered our appetites after the movie and walked into the Pancake Parlour.  I had decided to have a simple sandwich so we could indulge in a sweet pancake.  I chose a Chocolate Jubilee - a chocolate pancake with cream, ice cream, chocolate fudge sauce and strawberries.  I didn't want cream so they gave me two scoops of ice cream.  Argh!  It was too much ice cream and not enough pancake.  Nice but I think I would have enjoyed a short stack with whipped butter and chocolate sauce. 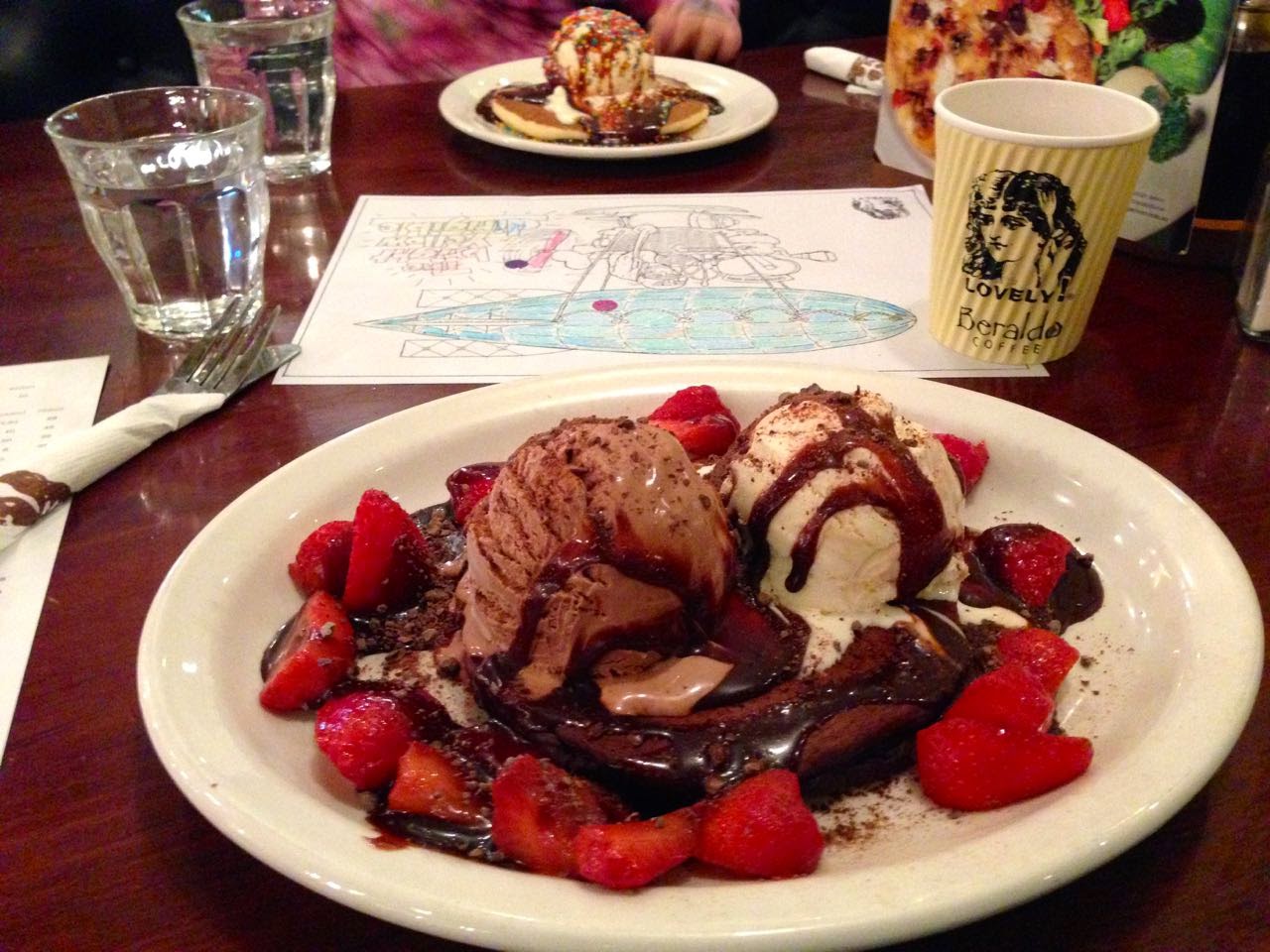 After some fun time looking around the shops, we came home to the chocolate porridge cake that had also been baked before I left.  It was a recipe that involves making porridge to mix into the cake.  I had it at a work morning tea years ago and loved it so much that I asked for the recipe.  I've never forgotten it despite it taking so long to make it at home.

We were rushing to get out of the house and my main error was to tip the cake out of the tin onto a wire rack too early and it had a huge split on the bottom.  When I turned it over the split was nowhere to be seen but the top of the cake was quite rustic so it probably wouldn't have mattered anyway. 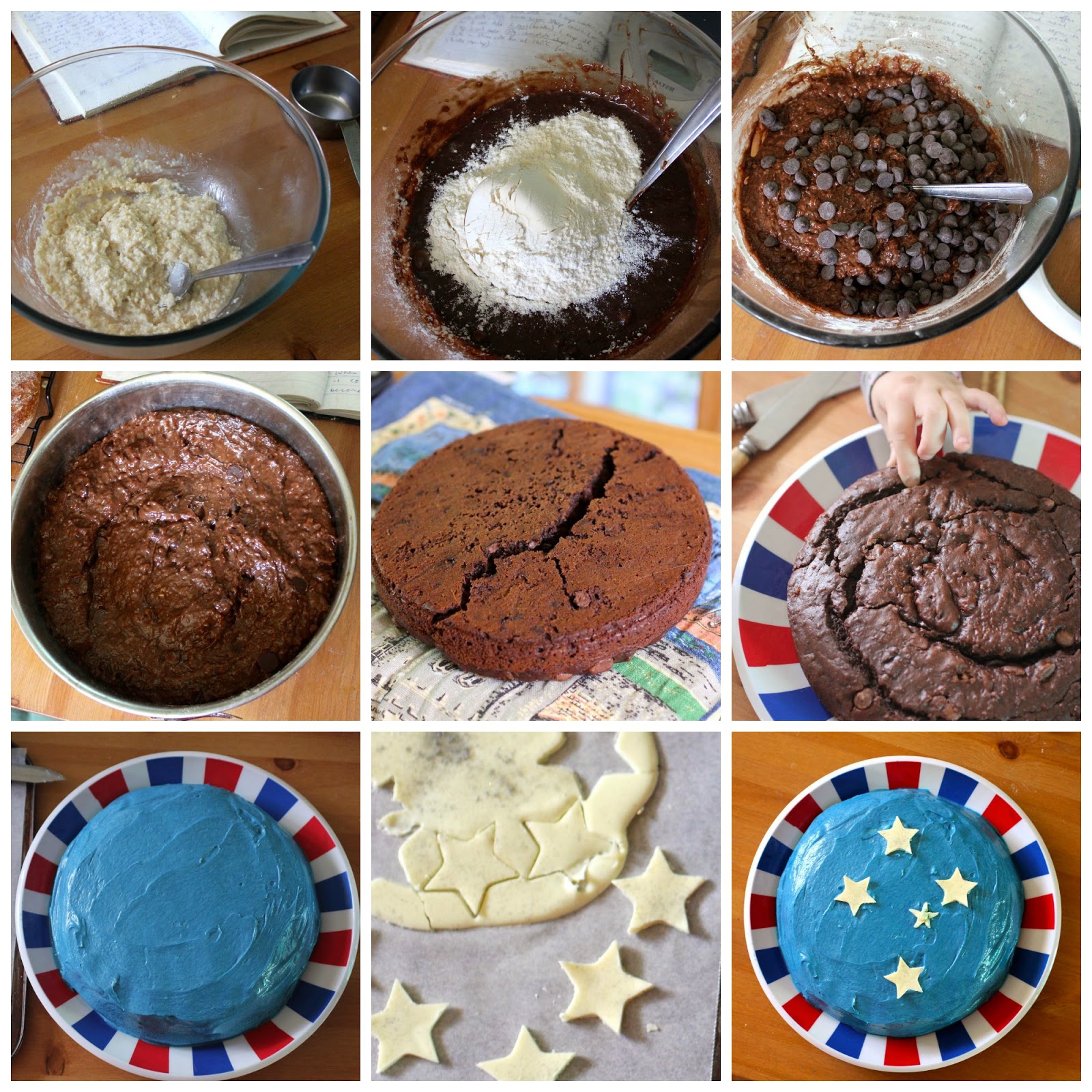 Still full of Australia Day ideas I was inspired to make a cake with a Southern Cross on it.  The Australia Flag was just a bit too much work and so I focused in on my favourite element in it.  The Union Jack and the Commonwealth Star don't interest me so much.  However I love how the Southern Cross star formation was in our skies long before Europeans arrived and it is unique to the Southern Hemisphere.

I made the stars out of white chocolate but I think I really needed smaller cutters or a bigger cake because they were rather close together and that tiny star was hard to cut out by hand.  I decided to use leftover white chocolate in a frosting because it would be easy to tint it. 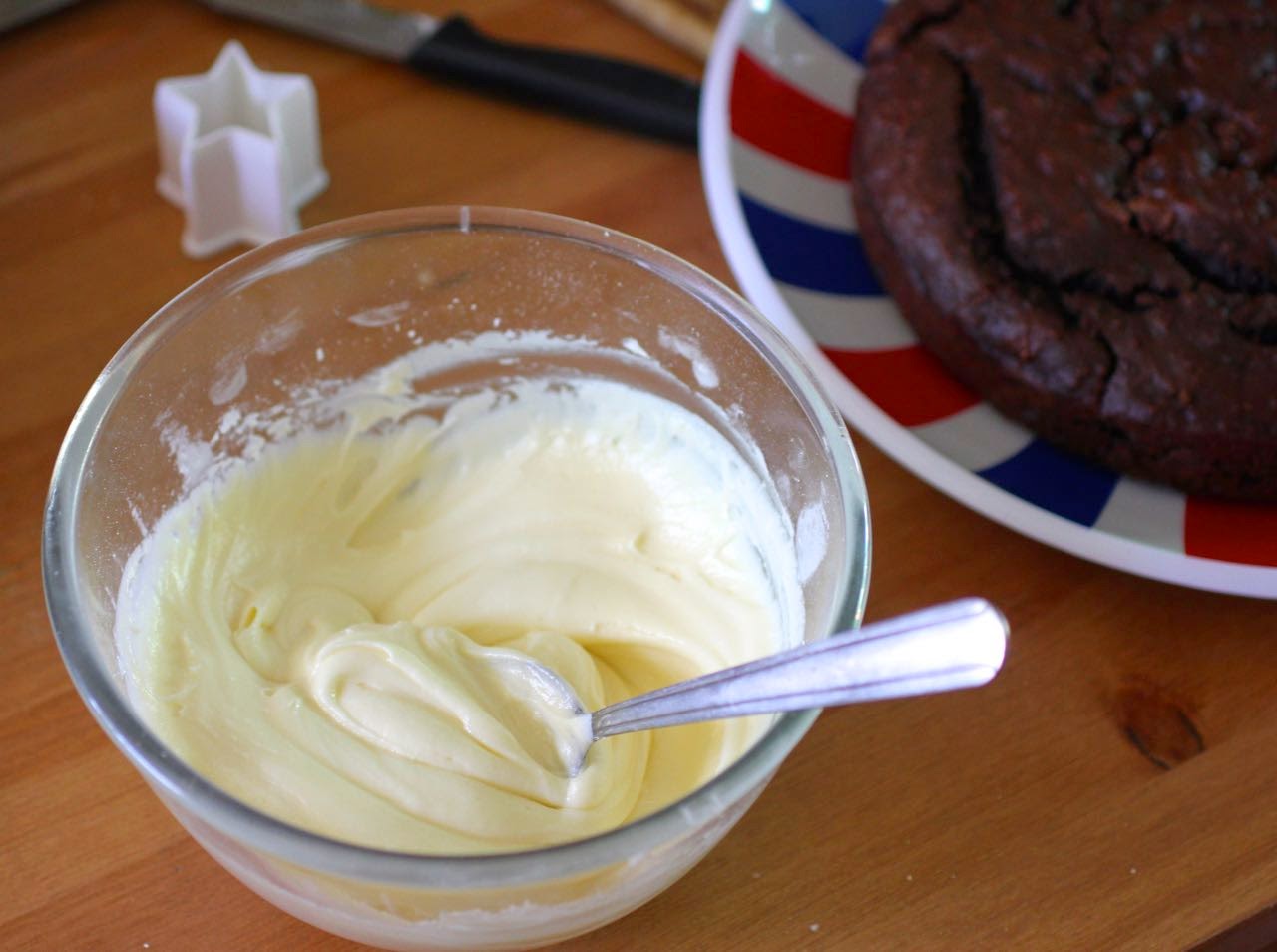 I found a recipe for a white chocolate frosting that wasn't too rich or too fussy to make.  It didn't need to cool for ages like this frosting, especially if you kept back some white chocolate and added it to the melted chocolate to bring down the temperature.  I didn't even get out the beaters for it.

I reduced the recipe but it was still a lot and very sweet.  Two thirds of what I made would be sufficient for the cake.  I have adjusted the amounts in the recipe below accordingly.  Mine was a much softer icing than in the photo I original saw so maybe more icing sugar or using butter rather than margarine might change this.

While Sylvia and I were at the shops we bought some royal blue food gel colouring.  However after I had used what seemed a lot it was still a lot paler blue than the royal blue on the flag but it was enough dye in our cake.  So maybe another time I will have another go at it as I really like the idea. 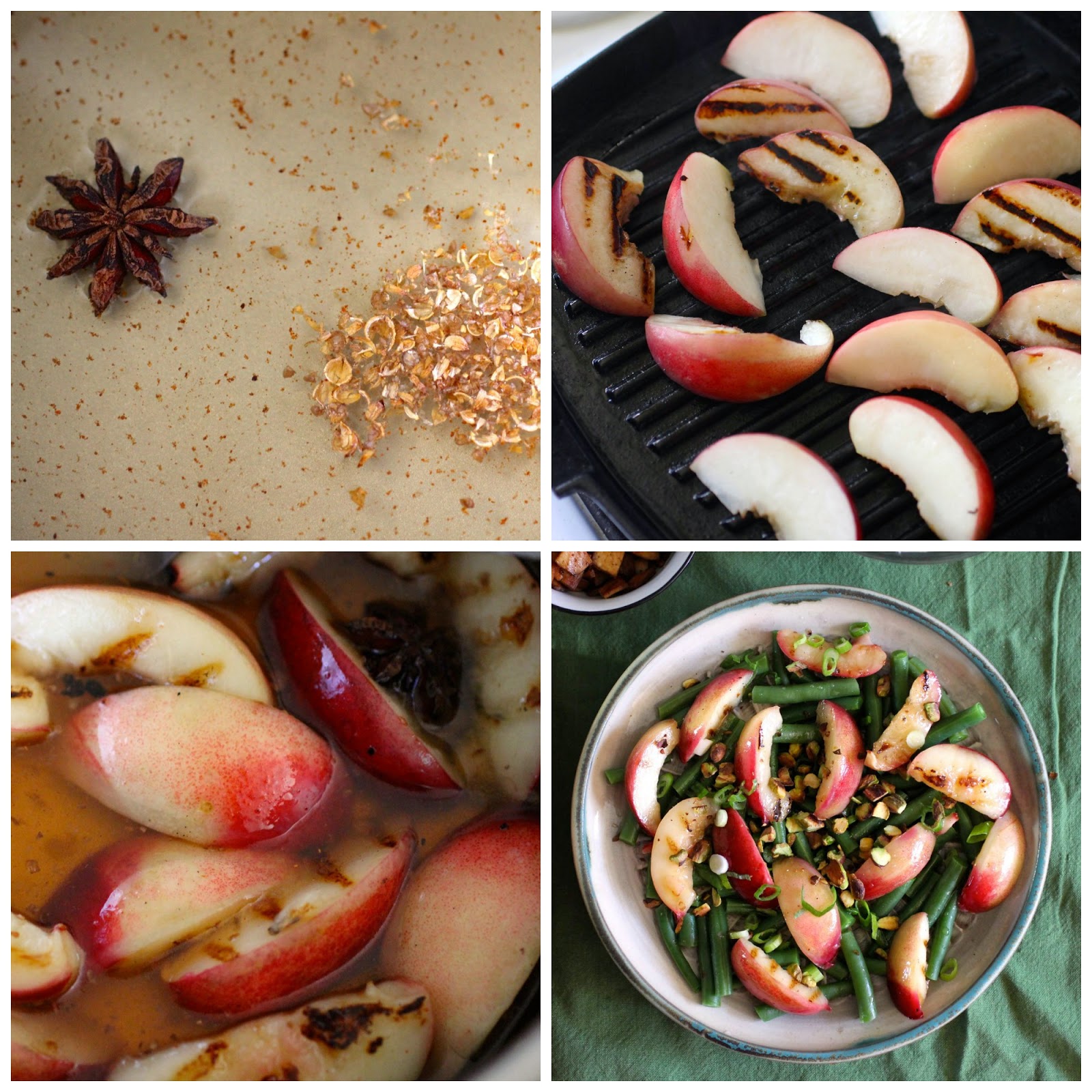 Then I turned my attention to the salad I had planned for dinner.  I had seen the recipe for Chargrilled Peach with Green Beans and Almonds while on holidays in Ocean Grove.  It appealed to my love of stone fruit and quirky salads.  It challenged me to use star anise and coriander seeds, which are often neglected in my kitchen.

My experiment at trying to chargrill hard peaches didn't work and I ended up using ripe nectarines.  My substitution of pistachios for almonds was fantastic.  Sadly I don't think I was so keen on the spices.  At least, that is my guess why the nectarines did not quite work.  The idea of pickling fruit in spiced vinegar sounded great but was not quite right for me.  I would love to try it again with a mustard, cumin and/or fennel seed flavours. 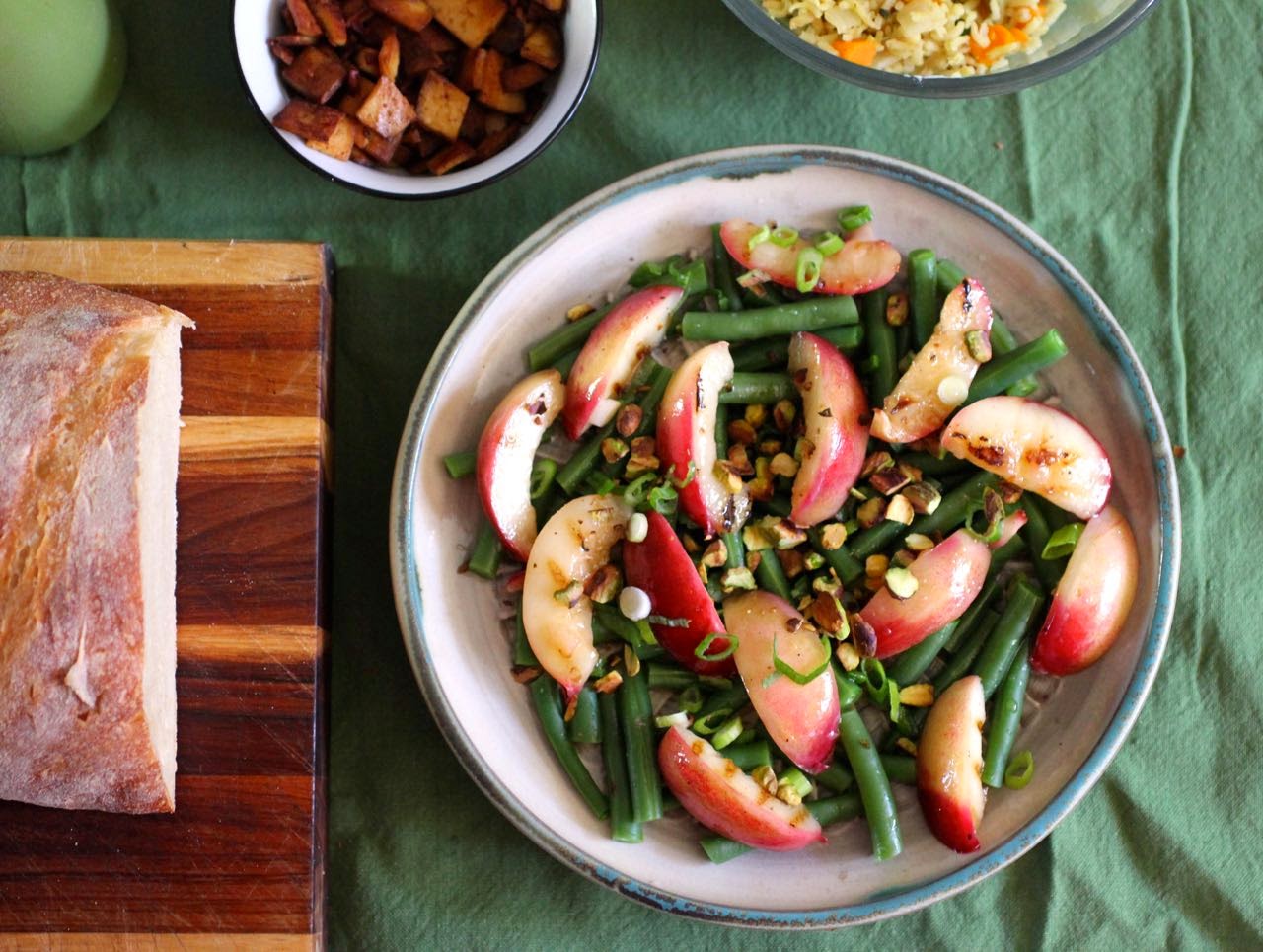 However you don't think a little star anise could spoil a good dinner, do you!  I had made chickpea pilaf the previous night and also had some tofu bacon and the bread I baked that morning.  The salad worked really well with these and I am happy to say that the spices did not dominate. 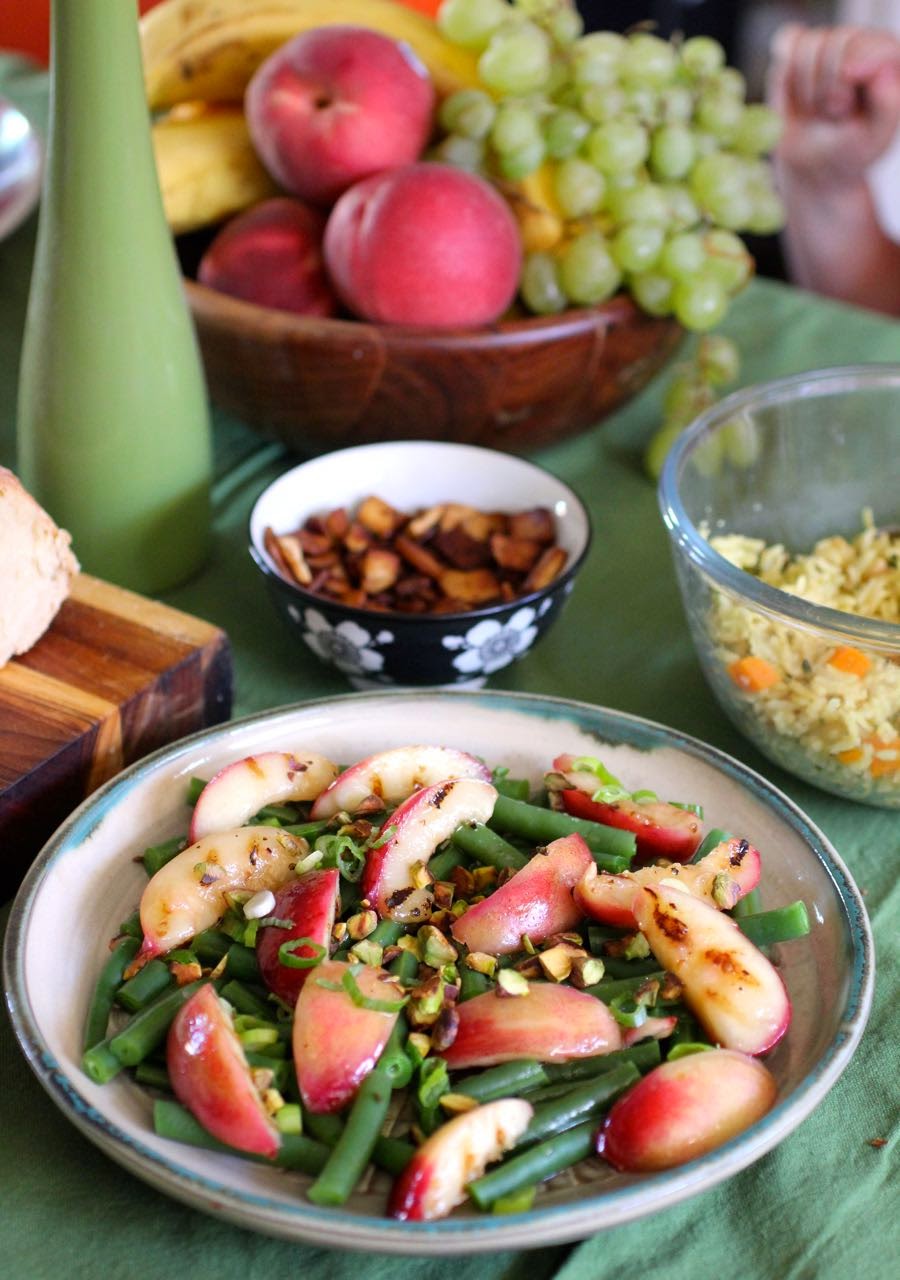 I really loved the green beans and pistachios in the salad.  They looked beautiful on the table too.  I don't eat either of these gorgeous green foods enough.  However I found the peaches made the salad too sweet as a main so I would recommend that this is best served as a side dish. 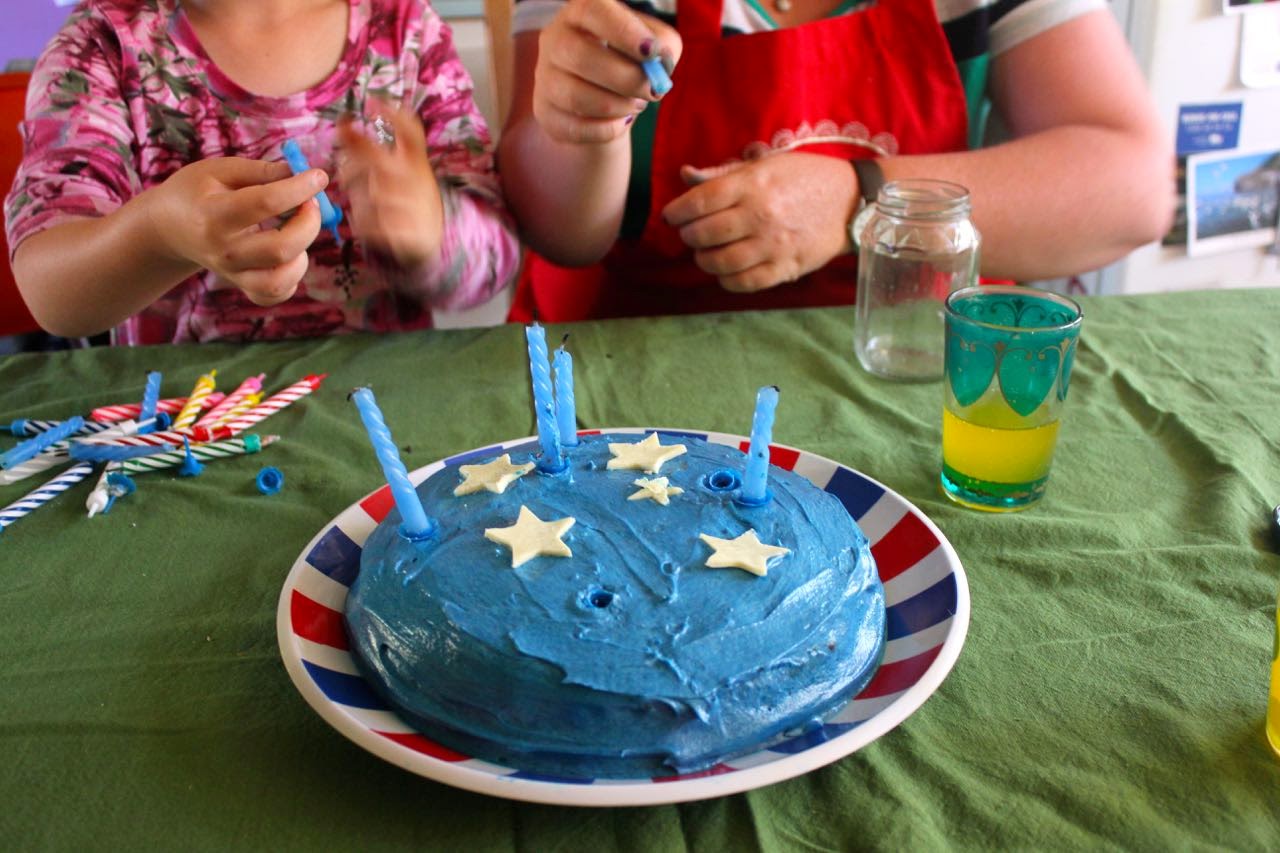 Before knew it we were onto the dessert which was, of course, cake.   We even had blue and white candles to put on the cake, even if some of them were a little wonky.

When we were baking it, the mixture tasted like chocolate porridge and I could have eaten it raw.  It was a good sign of what was to come.  While we waited for it to cool, Sylvia (who is constantly planning her own birthday) told me "at my party we will have porridge cake to eat that isn't cooked". 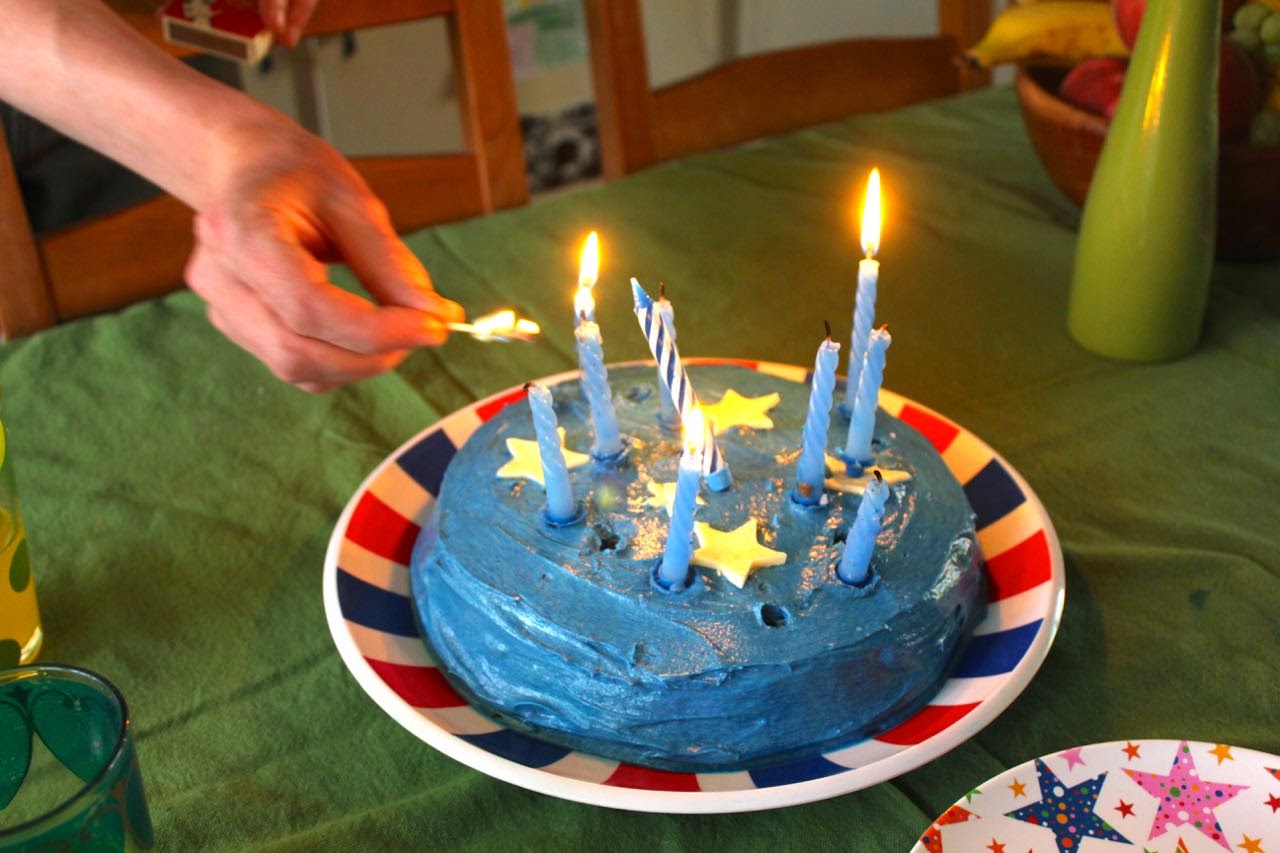 I was happy that I loved this cake now as much as I loved it years ago.  I think the soft sweet icing worked well with the chocolatey cake.  Why has it taken me so long to make this recipe?  I hope it wont be so long until I make it again.  And I would love to know who is Meryl.  It is the name on the recipe I was given rather than the name of my colleague who gave me the recipe. 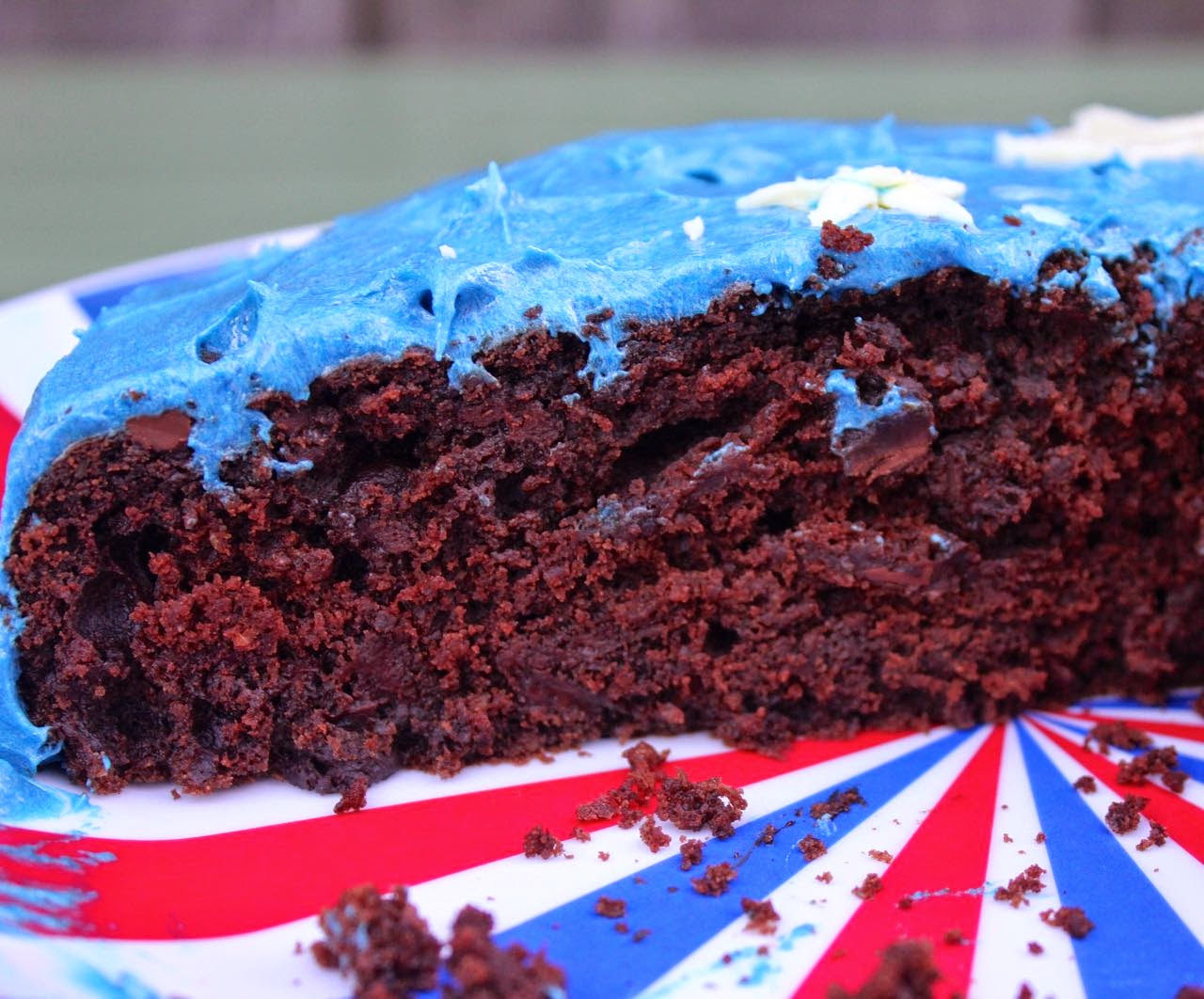 It was a lovely birthday.  Though it was a quiet day, it was really nice to go to the letterbox and find quite a few cards and even a parcel that arrives right on time.  E gave me lots of reading and CDs that I have been enjoying (and missed ukelele practice to have dinner with us).  And Sylvia was just so excited, not just because she loves birthdays, but also because we were in a shop a week or two before when she made me go outside so she could choose and buy me a present.  It was a little 10 pin bowling collection of erasers that we had fun playing with.  There were also more celebrations a few days later, which I shall write about soon.

Chargrilled Peach with Green Beans and Almonds
Adapted from Valli Little in Delicious magazine, Jan 2014/Dec 2015
Serves 3-4 as a side dish

Heat sugar, vinegar, coriander, star anise, and chilli in a small saucepan over low heat until sugar has dissolved.  Set aside to cool

Brush peaches with extra olive oil and grill until slightly charred on either side (1 to 2 minutes either side).  I don't have an outdoor bbq so I used a ridged cast iron pan.  Place chargrilled peaches into the vinegar mixture and set aside to pickle for about 30 minutes.

Meanwhile cook the green beans for 2 to 3 minutes in boiling salted water until just cooked and then plunge into iced water to cool.

Arrange beans on a medium shallow bowl, arrange peaches on top.  Drizzle with oil and a little of the pickling liquid.  Scatter with pistachios and spring onion.

Cook oats and water to make porridge.  (I cooked mine for 3 minutes in the microwave.)  Mix in butter, brown sugar and cocoa.  Stir and cool briefly.  Add in eggs, flour, bicarbonate of soda and chocolate chips.  Stir well.  Scrape into a lined 22cm round cake tin.  Bake at 160 C for 30 to 35 minutes until a skewer comes out clean.  Cool in tin for 10 to 15 minutes* and cool on a wire rack.

Ice with white chocolate frosting (below) if desired.  If you wish to do the Southern Cross on the cake, melt some white chocolate and chill until just set (too chilled is hard to cut out) and then cut out some star shapes and arrange on iced cake.

*NOTES: I finely chopped 1 cup of rolled oats to make 1/2 cup of instant oats.  I think it took me slightly longer to bake the cake.  I baked mine at 170 C on a rack in the middle of the oven because I had been baking bread just before the cake went in the oven.

Melt about two thirds of the chocolate (I did this in the microwave but it can be done on the stovetop too).  Remove from heat or microwave and stir in the remainder in small chunks until it melts.  Set aside and cool slightly.

Beat butter and icing sugar until creamy.  I did this by hand but it could be done with electric beaters too.  Mix in the white chocolate and a pinch of salt.  Add a little milk if mixture is too thick.

On the Stereo:
Is a Woman: Lambchop
Posted by Johanna GGG at 15:18