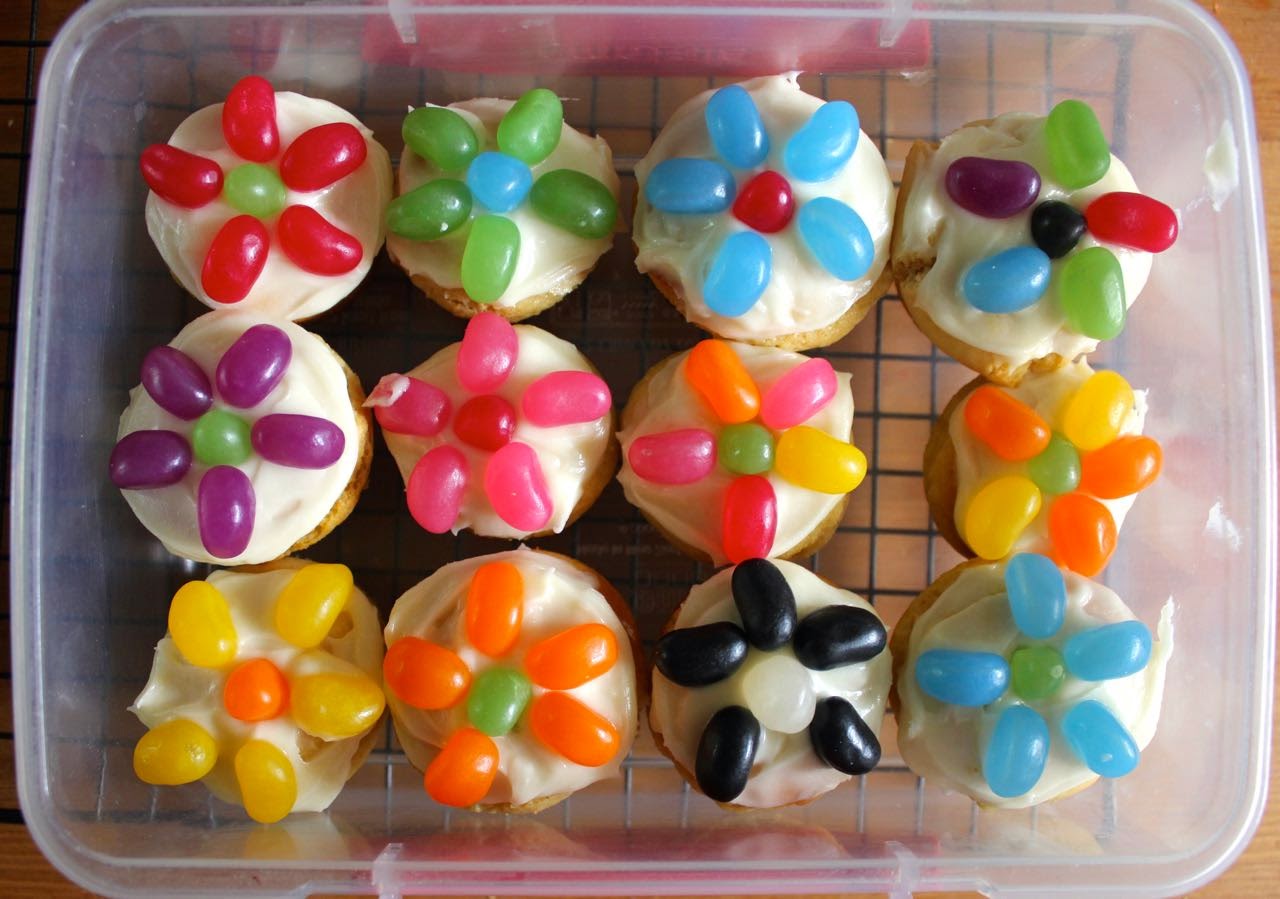 Who would have thought that a packet of jelly beans would run out of matching colours before we finished decorating the cupcakes for my birthday.  It didn't matter.  The cupcakes looked colourful, tasted good and were fun to make with Sylvia.  We took them on a picnic lunch at the zoo.  The lions roared, the giraffes were elegant and the food was good.  The weather was even gentle and mild.  And I took heaps of photos! 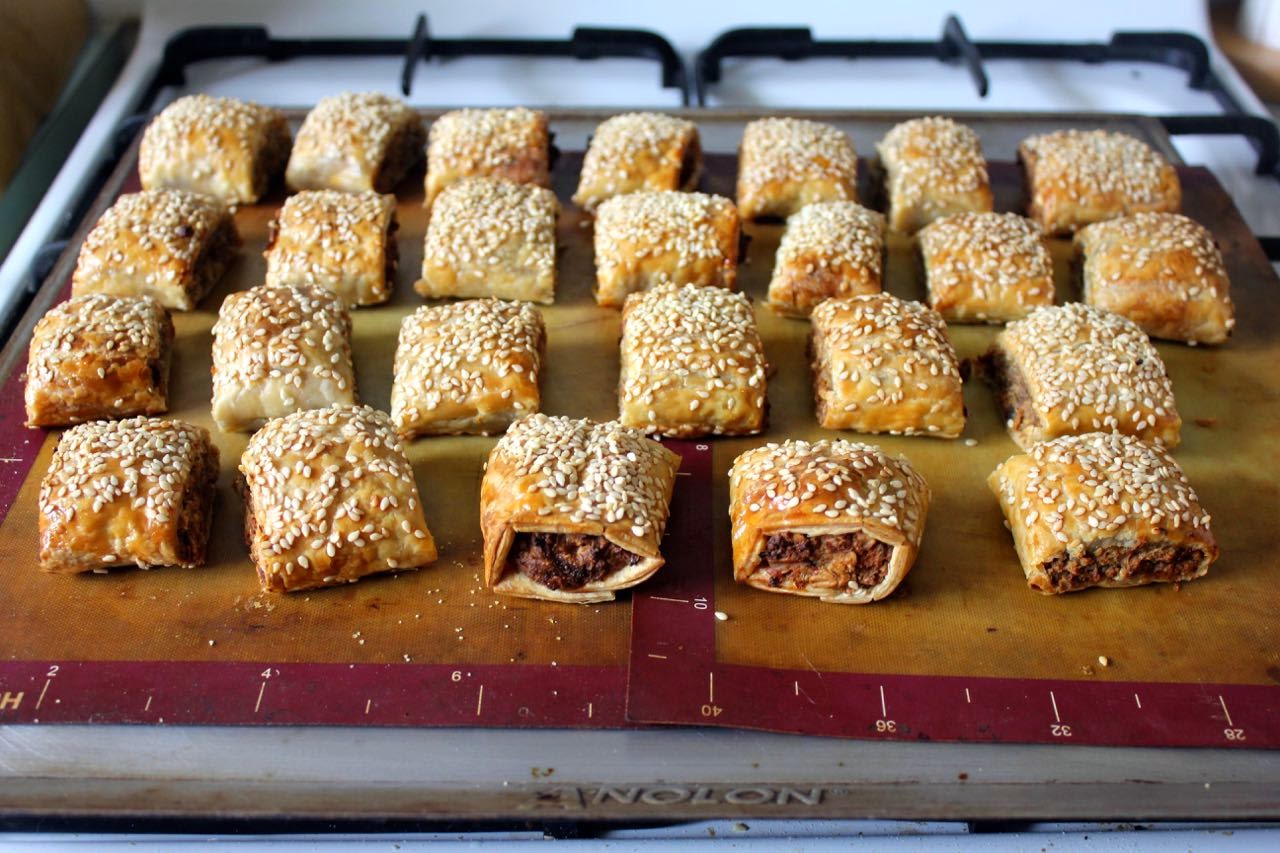 The day before the picnic, I made a batch of sausage rolls and some grubs using Tim Tams.  The sausage rolls were excellent as always.  I heated them up in the morning before heading out so they were nice and fresh.  (I also took the opportunity to update my photos on the original post in 2008 when my photography was a few steps behind where I am at today.) 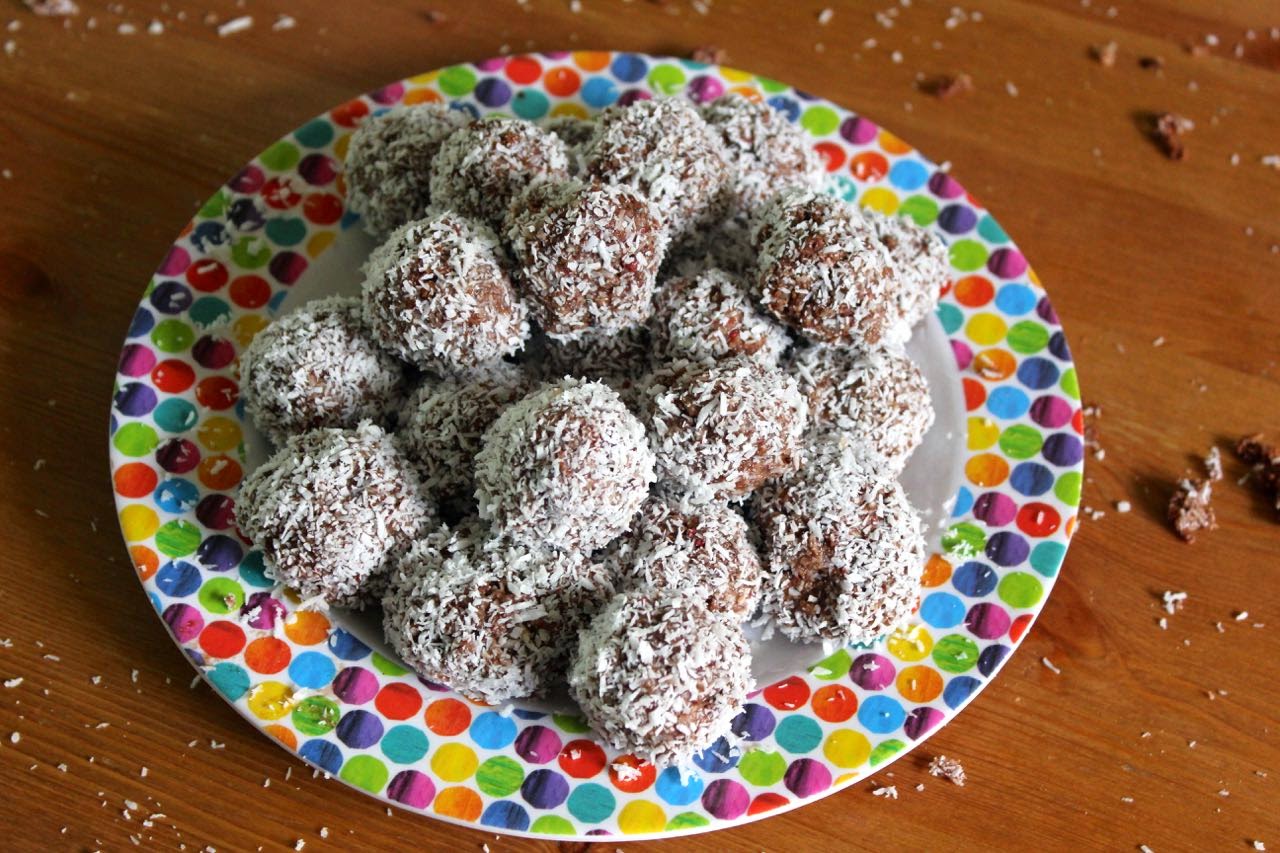 Sylvia had a friend over for a playdate.  They helped me test the sausage rolls as well as roll the grubs into balls and coat them in coconut.  I saw the idea for putting Tim Tams in grubs at Love SWAH.  It had to be tried.  For those who don't know, Tim Tams are an iconic Aussie biscuit made of two crisp chocolate biscuits with a chocolate cream filling that are then covered in chocolate.  (You can also read elsewhere on the blog about my love of my favourite childhood treat, which we called grubs.)

Lately there have been lots of different versions of Tim Tams and I used mostly caramel Tim Tams but also a few red velvet Tim Tams.  The caramel didn't blend up too well which meant there were some gooey pockets in the grubs.  Caramel aside, the Tim Tams didn't make a huge impact on the taste.  I am glad I tried it.  I am not sure it will replace my usual use of Marie biscuits in the grubs. 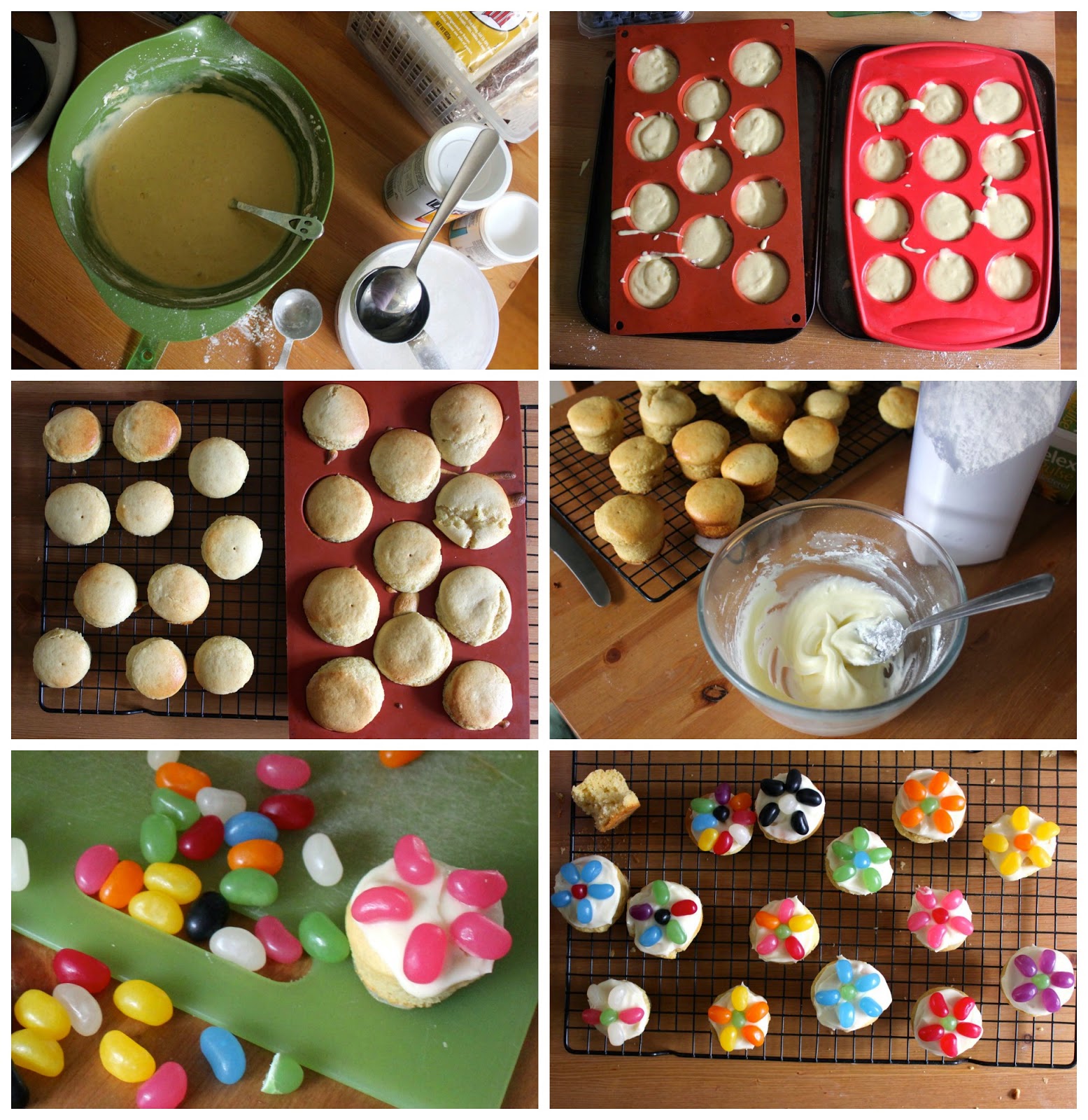 I can make the sausage rolls and grubs without too much effort because they appear so regularly in my kitchen.  Making gluten free vanilla cupcakes is still a challenge.  I decided to use some Bob Mills gluten free flour mix.  Sadly the pantry moths had made a meal of it and ignored the White Wings GF mix that I don't like so much.  Fortunately I have tried a few GF flour mixes and was able to make my own.  It worked quite well.

The resulting cupcakes were quite dense in the way of a British Victoria sponge rather than light and fluffy like an Australian sponge.  I was happy with that.  The recipe I followed didn't call for xanthum gum but I had it so I used it.  I am curious about how and if the cupcakes texture would change without it. 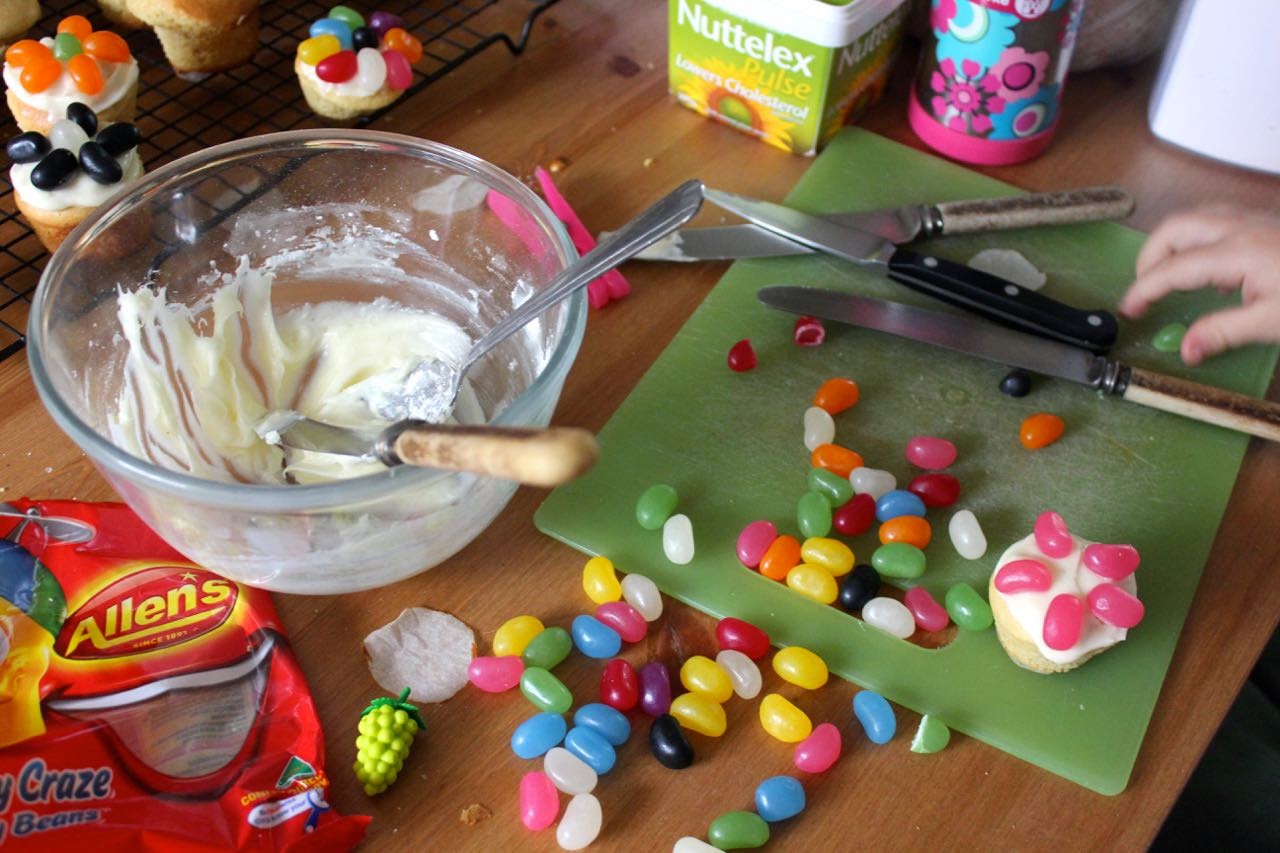 We made the cupcakes in the morning before heading off to the zoo.  Gluten free baking is best had fresh so I didn't want to risk it being dry.  I made the icing with a large dessertspoonful of cream cheese, a teaspoonful of margarine and enough icing sugar to make a spreadable icing.  I underestimated and found myself running short of icing and jelly beans.

Sylvia and I had fun doing jelly bean cupcakes.  It was a bit of a rush but even so we were the first to arrive at the zoo.  I guess that is joy of going somewhere near home.  The rest of my family were travelling there from Geelong. 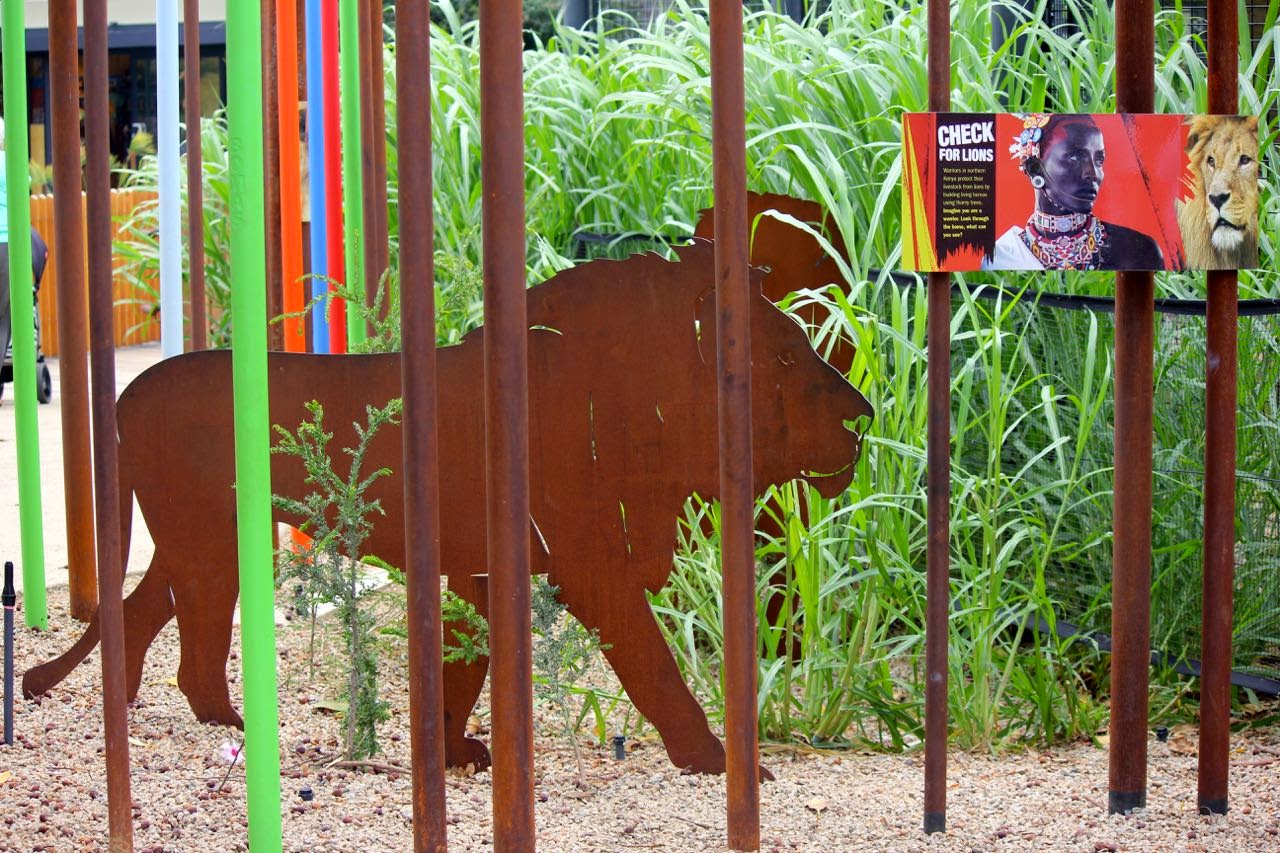 The animals at the top of our list to see were the lions.  Last time I was at the zoo, the lion enclosure was closed while they built a new one.  I was a little sad that the walkover has gone because it is one of the parts of the zoo that I remember being there when I was a child.

The new enclosure is impressive and modern and gave much better views of the lions.  There is a lot more information and buttons to push to hear lion noises.  I still miss the old enclosure. 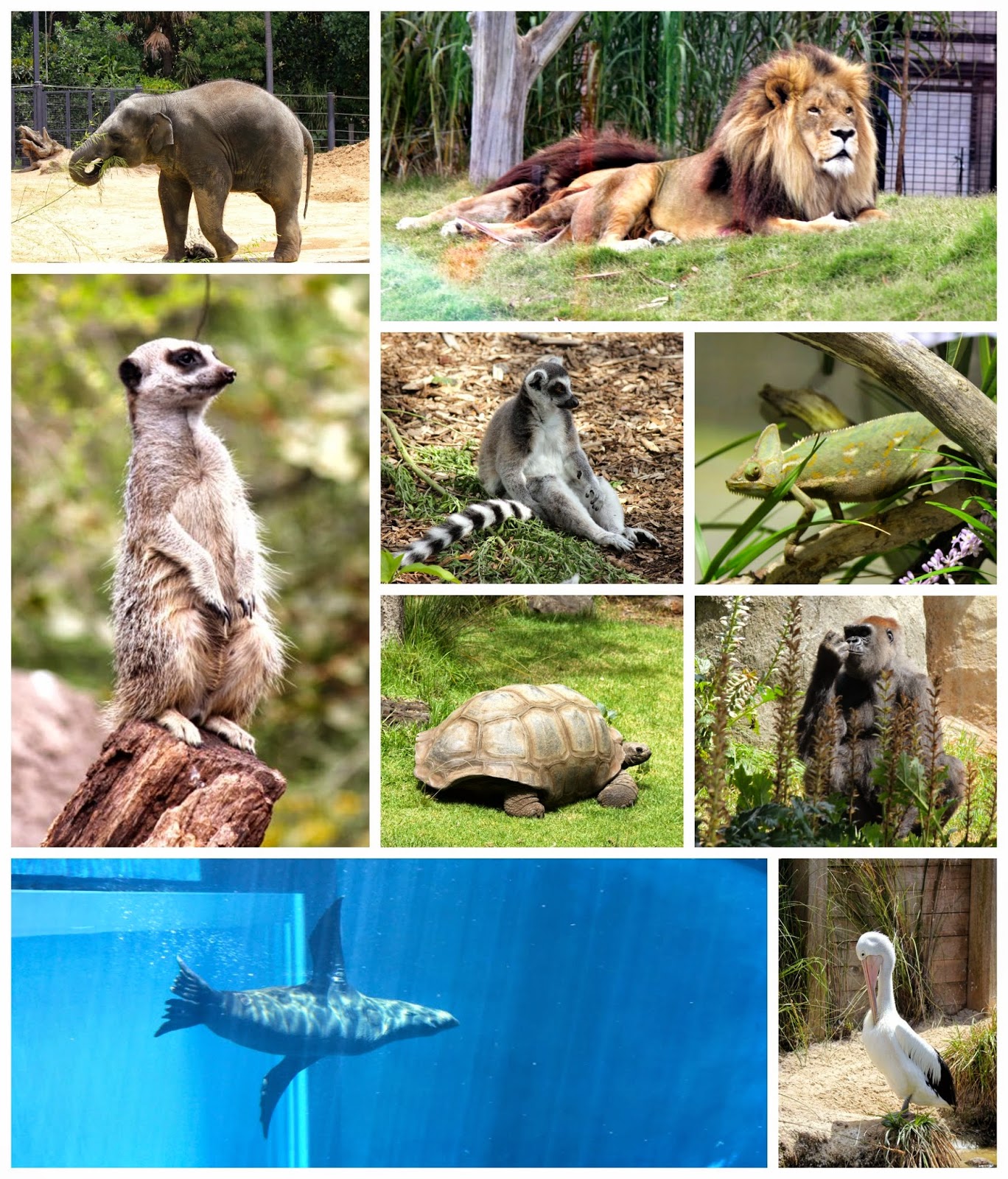 After the lions, we hung about the meerkats and the tortoise and caught up with more of the family before seeing the seals.  Below is just some of my family - siblings, nieces, nephews, in-laws and parents.  The seal enclosure is so calming.  And the little fairy penguins were also swimming about near the seals. 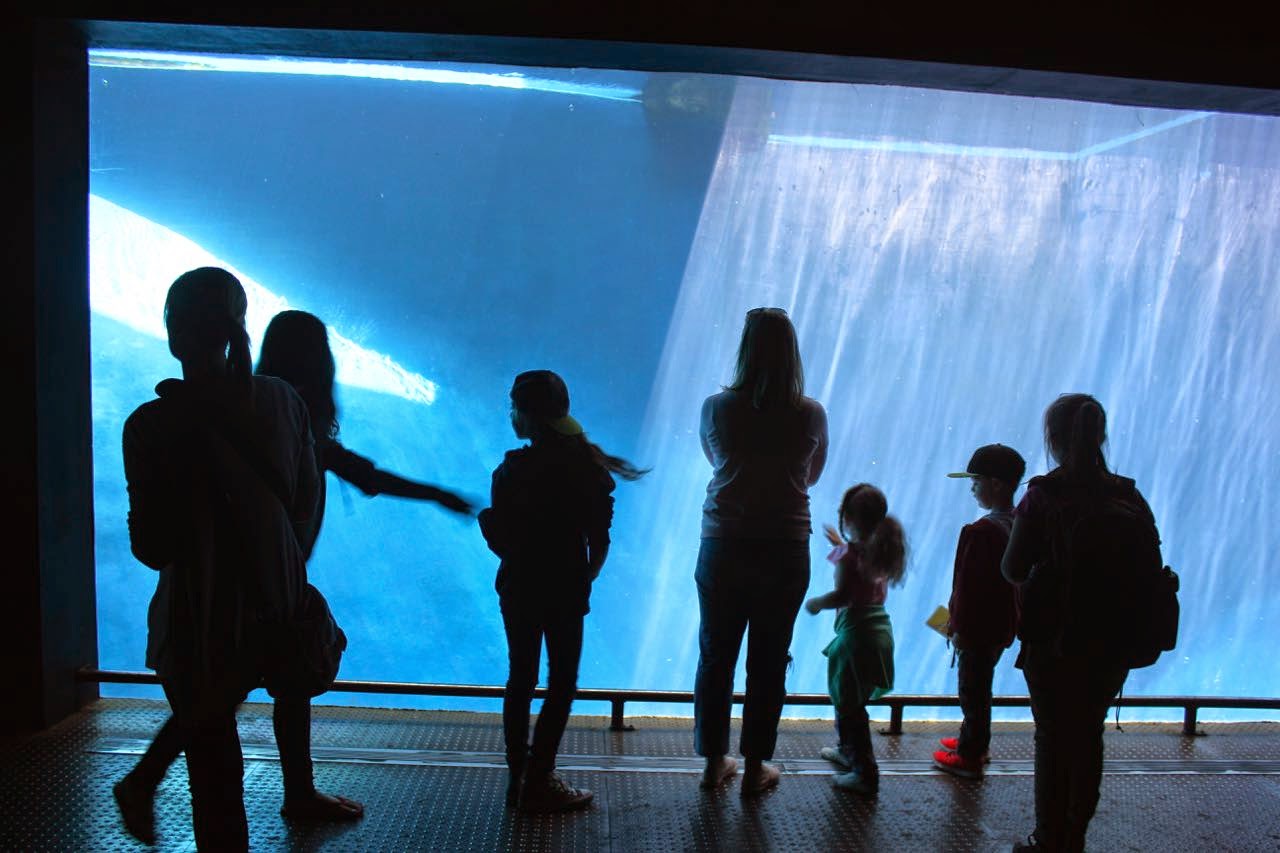 We spread out some rugs at a grassy area where we stopped eat out picnic.  The sausage rolls made me very happy and were welcomed by quite a few of my family.  We also had dips, chips, vegies and rye wraps. 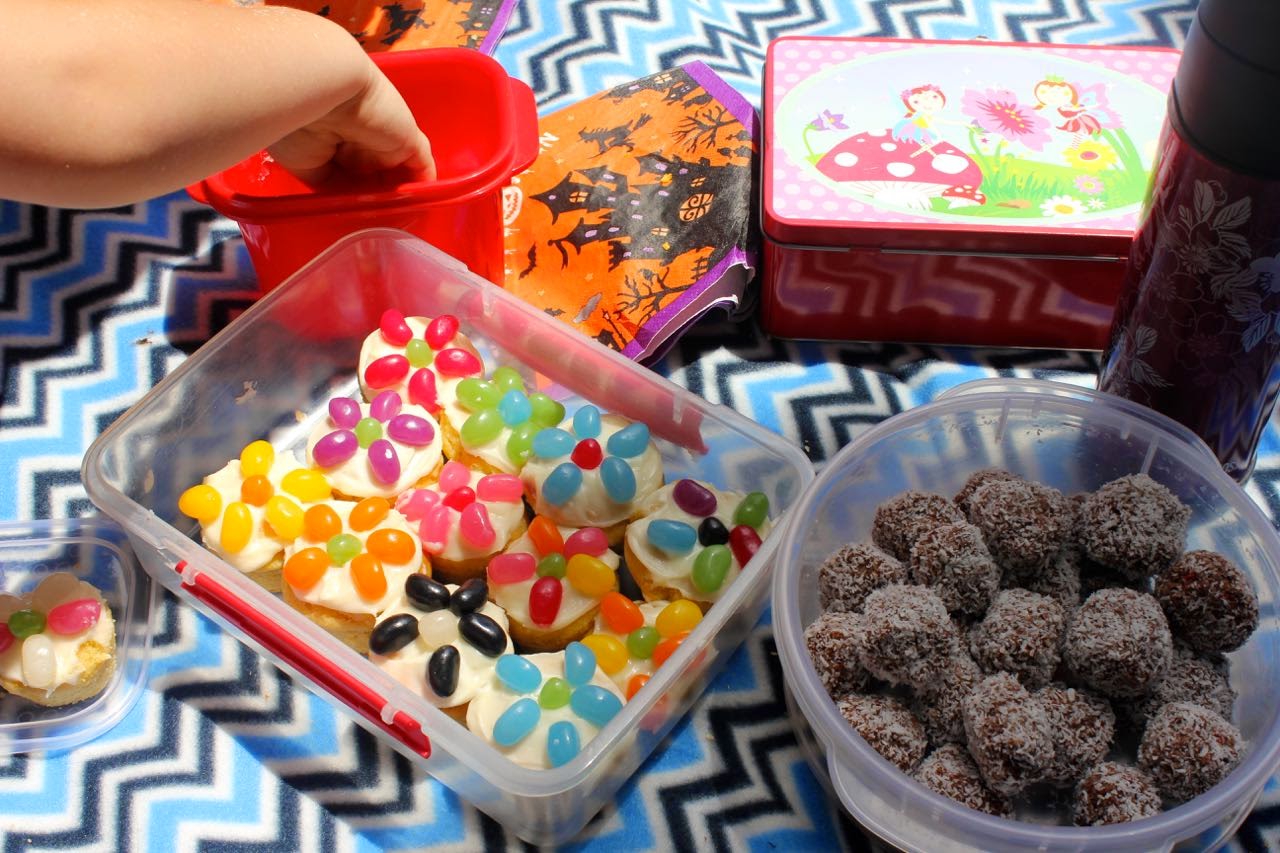 By the time we got out dessert everyone was quite full.  I really liked the cupcakes and they seemed to go down well.  My mum had made a chocolate cake and, though there were no candles, everyone sang happy birthday and I cut the cake. 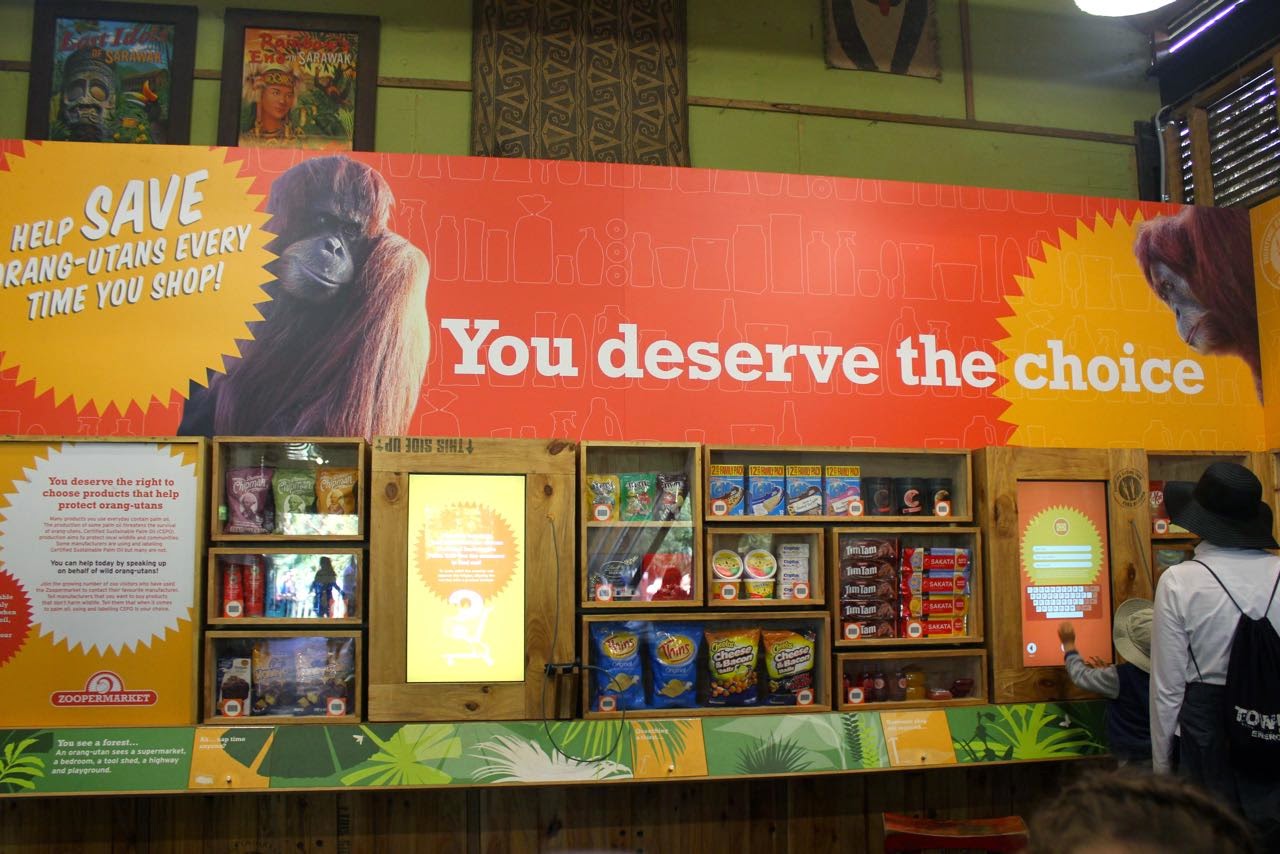 We walked through the elephant trail, which includes tigers, butterflies and orangutangs.  It is a trail that we know well and always enjoy.  The mother and baby elephant were playing with each other, the butterflies landed on everyone and the tigers were out but I couldn't see a thing for the crowds.  The 'zoopermarket' in the orangutang area was interesting.  The kids loved the cash register and the modern scanners that actually scanned where products had palm oil in them. 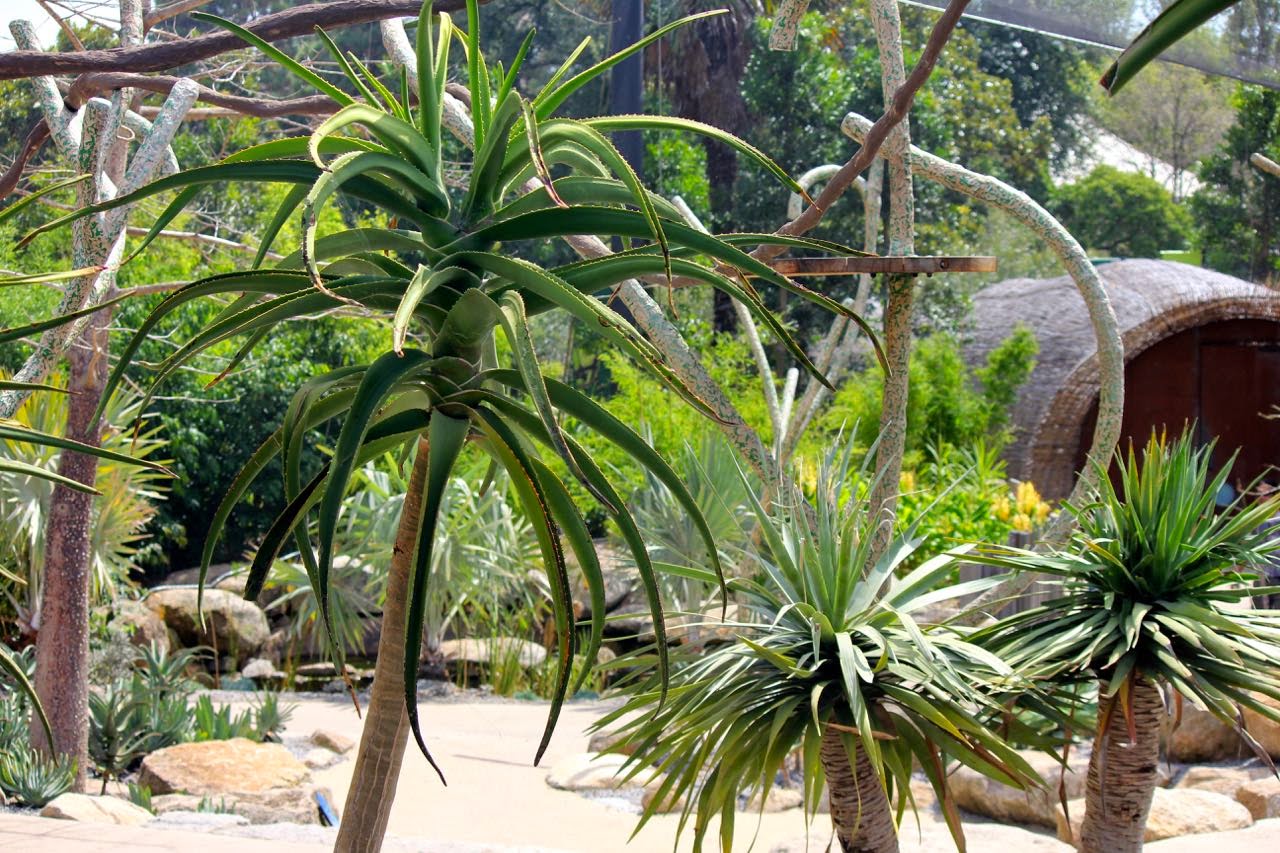 I did the gorilla and monkey trail for the first time since work has been done on it.  The first animal on this walk is the lemurs.  I really loved all the curly poles and trees that looked a little Dr Suess.  And the lemurs were great fun to watch. 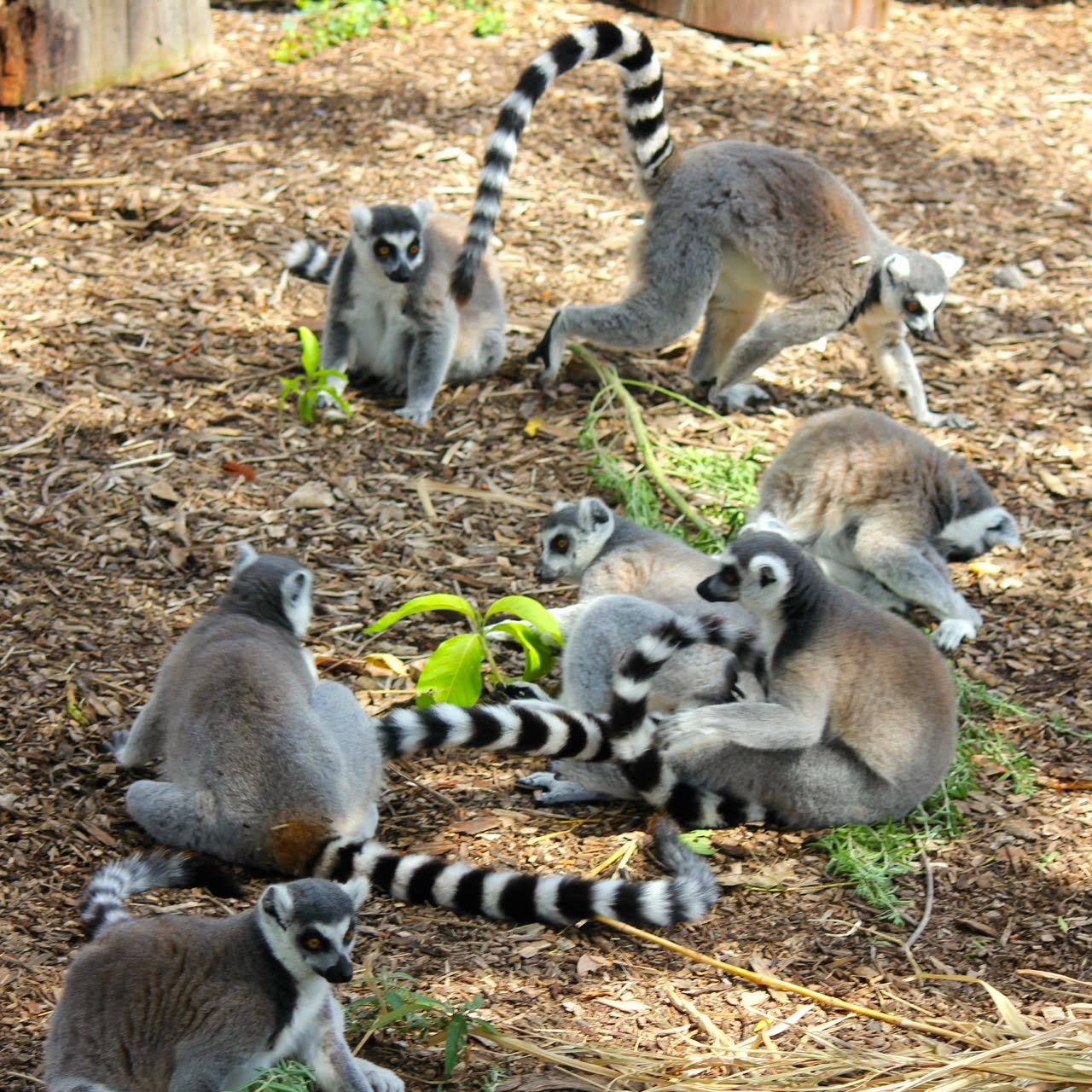 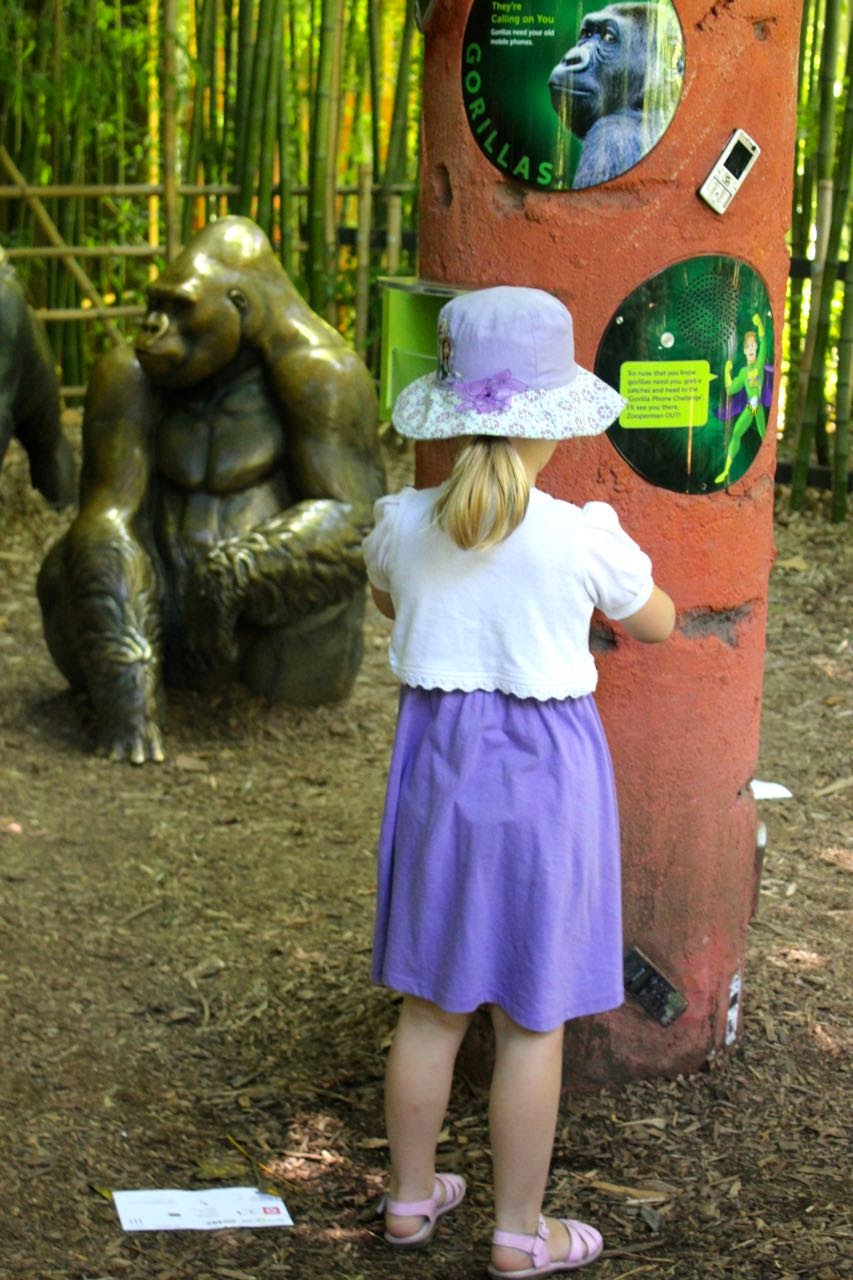 I enjoyed seeing all the monkeys as we walked along the trail.  The latecomers had gone to check out the lions.  Meanwhile E was off looking at the wombats.  And Sylvia was playing hide and seek with her cousin along the walkway. 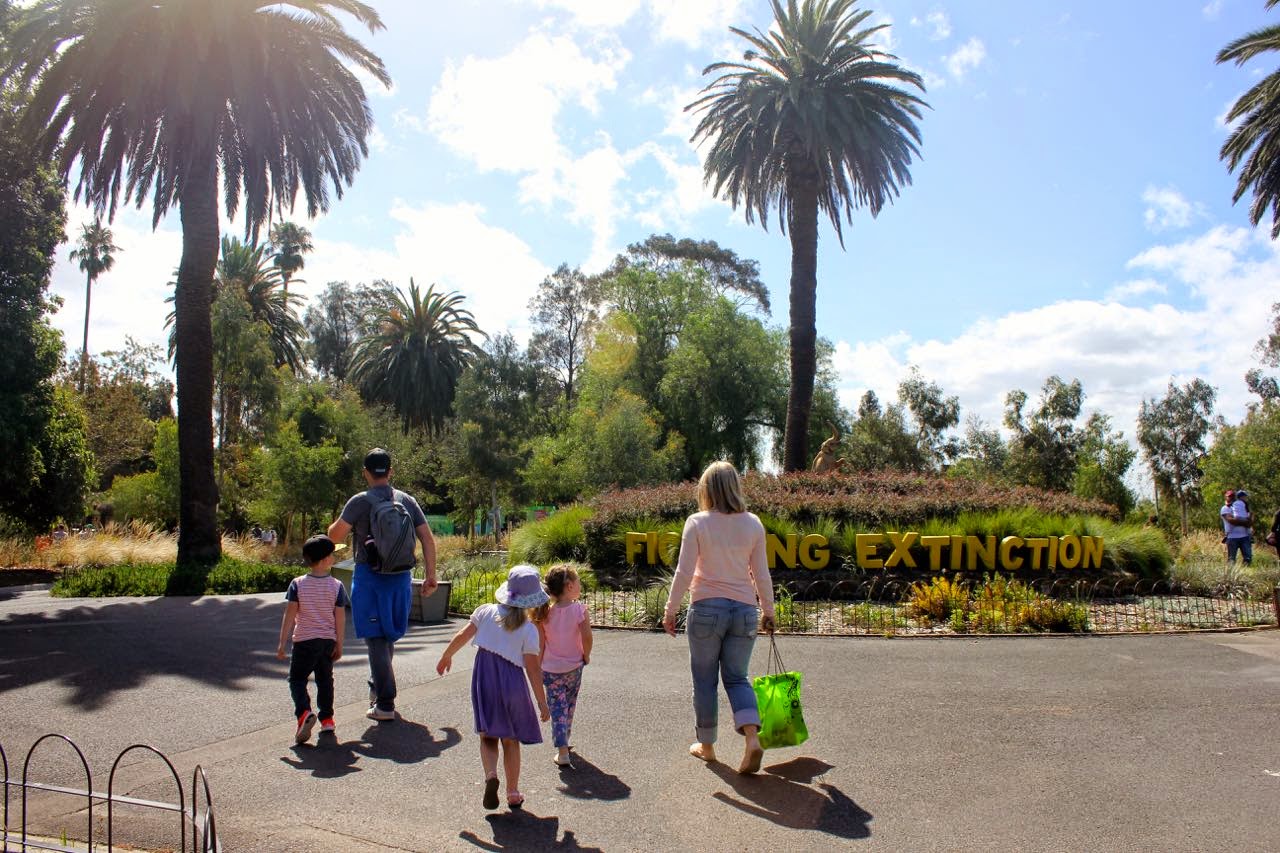 Soon it was time to go home.  We had walked about as far as we could.

While no one had much room for the grubs straight after lunch, I didn't have so many to take home.  I offered them around after we walked through the butterfly house.  My brothers, always a bit suspicious of my cooking, asked if they really had Tim Tams in them.  When I confirmed it, their eyes lit up as they sampled them. 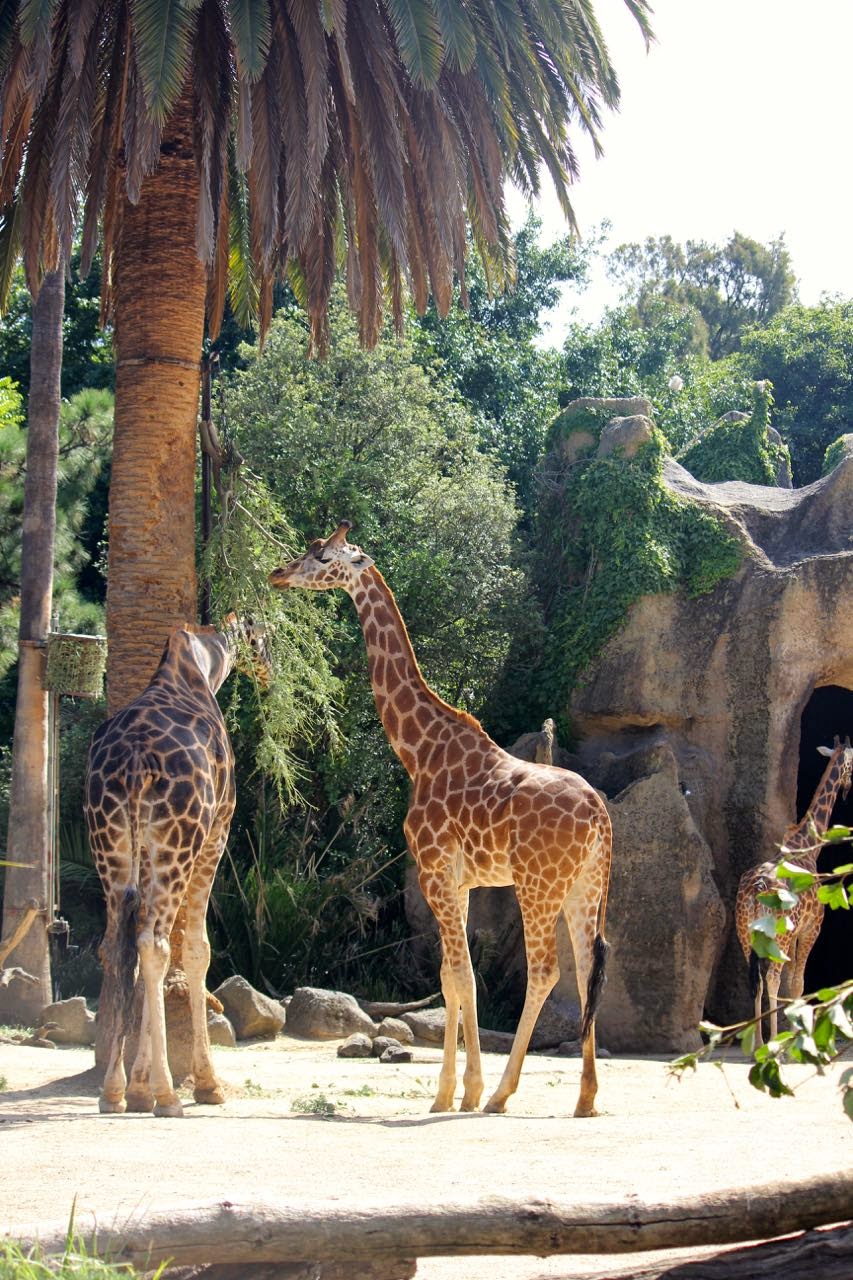 But I had to just stop in and see the giraffes before we went.  Such magnificent creatures.  Then it was time for our train home for some leftover sausage rolls for dinner. 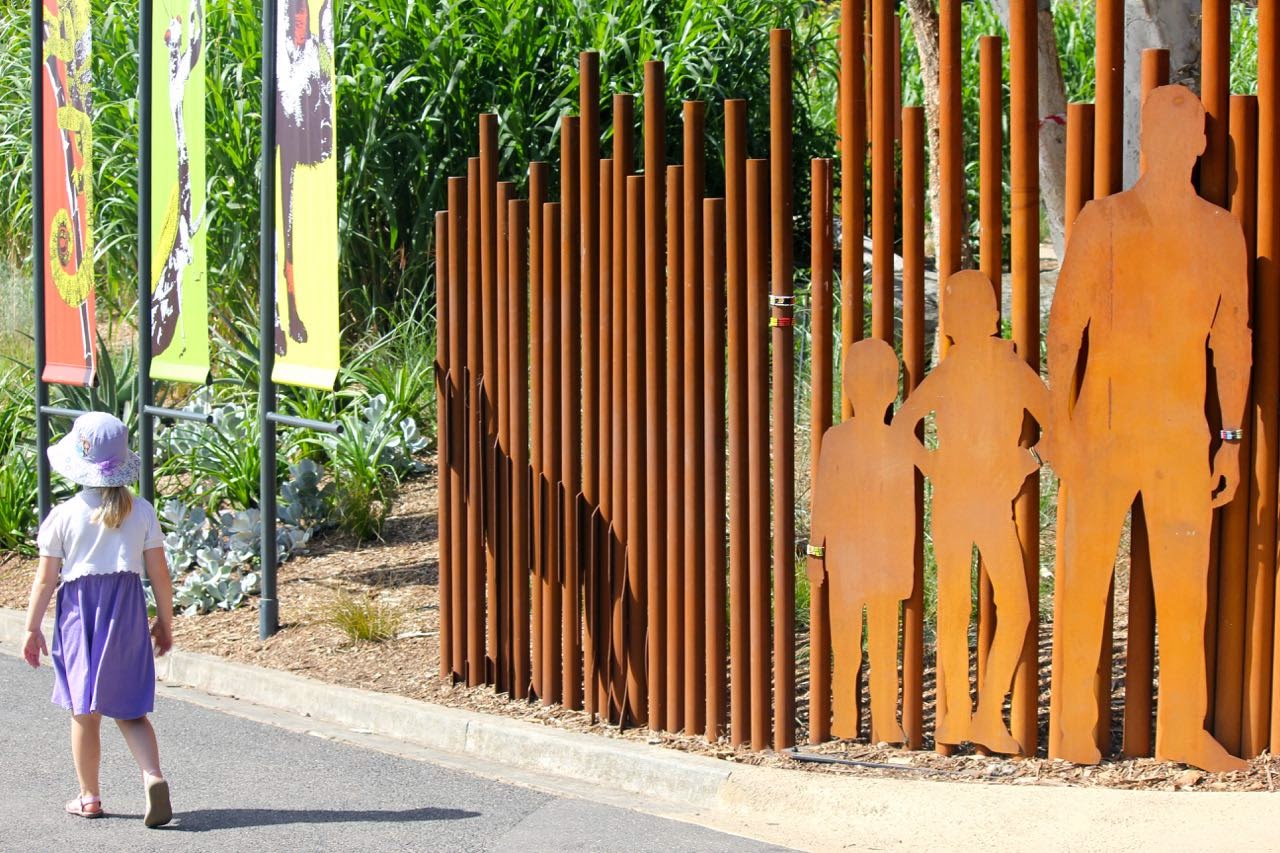 I am hoping we might get to the zoo a bit more often this year as I have now signed up to a zoo membership.  When I asked Sylvia what animal she would like to see, she said a dolphin.  Um... there are no dolphins at our zoo.  Oh well, there are always the meerkats!

I am sending this slice to Caroline (and Ros) for Alphabakes, the challenge to bake with ingredients or dishes starting with different letters of the alphabet each month.  This month the letter is V - which here is V for Vanilla.

Put the Tim Tams in the blender and process until the biscuits are pulverised to crumbs.  Mix Tim Tam crumbs with coconut, cocoa and condensed milk.  Roll into balls the size of a walnut and toss in coconut to coat.

Cream butter and sugar.  Beat in eggs and vanilla.  (I used a spoon up to this point but you could use electric beaters here.)  Stir in flours, gum and salt and milk to make a thin batter. Spoon into 2 x 12 hole mini muffin pans.  Bake at 180 C for 10 to 12 minutes or until golden brown and a skewer comes out clean.

NOTES: I used a leftover 1/4 cup and 2 tbsp of condensed milk, so instead of the 3/4 cup caster sugar I used 1/4 cup, and instead of 1/2 cup milk I used 2 tbsp.  I used soy milk which is our household milk of choice.  I also used Nuttalex margarine instead of butter.

On the stereo:
fratellis new album
Posted by Johanna GGG at 22:51