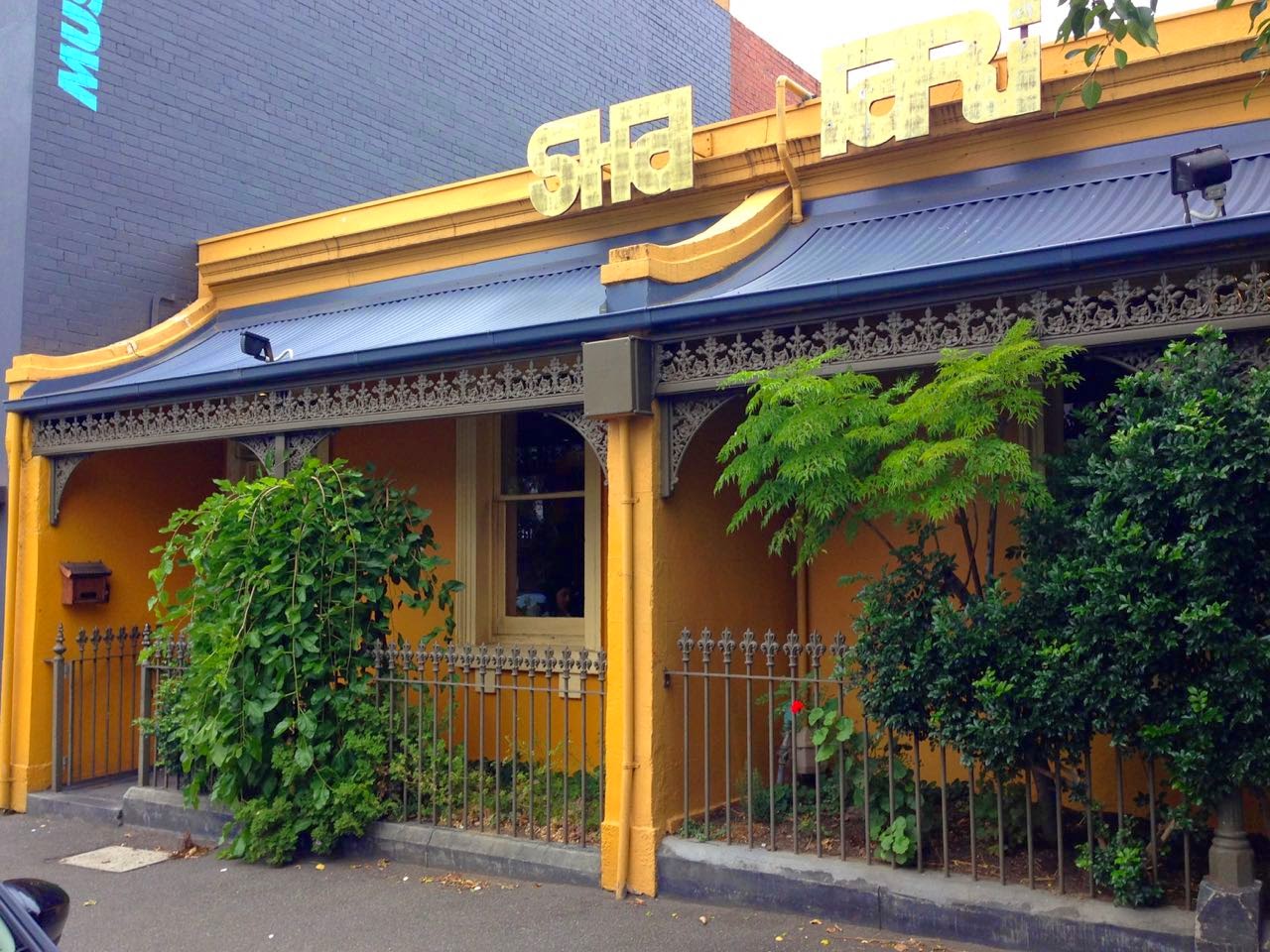 Shakahari Vegetarian Restaurant is a local institution.  When it opened in 1972 I guess that there would have been very little in Melbourne in the way of vegetarian restaurants and/or restaurants offering interesting vegetarian dishes.  When I started going there in the 1990s that was certainly the case.  These days the competition is tougher but it remains a sentimental favourite. 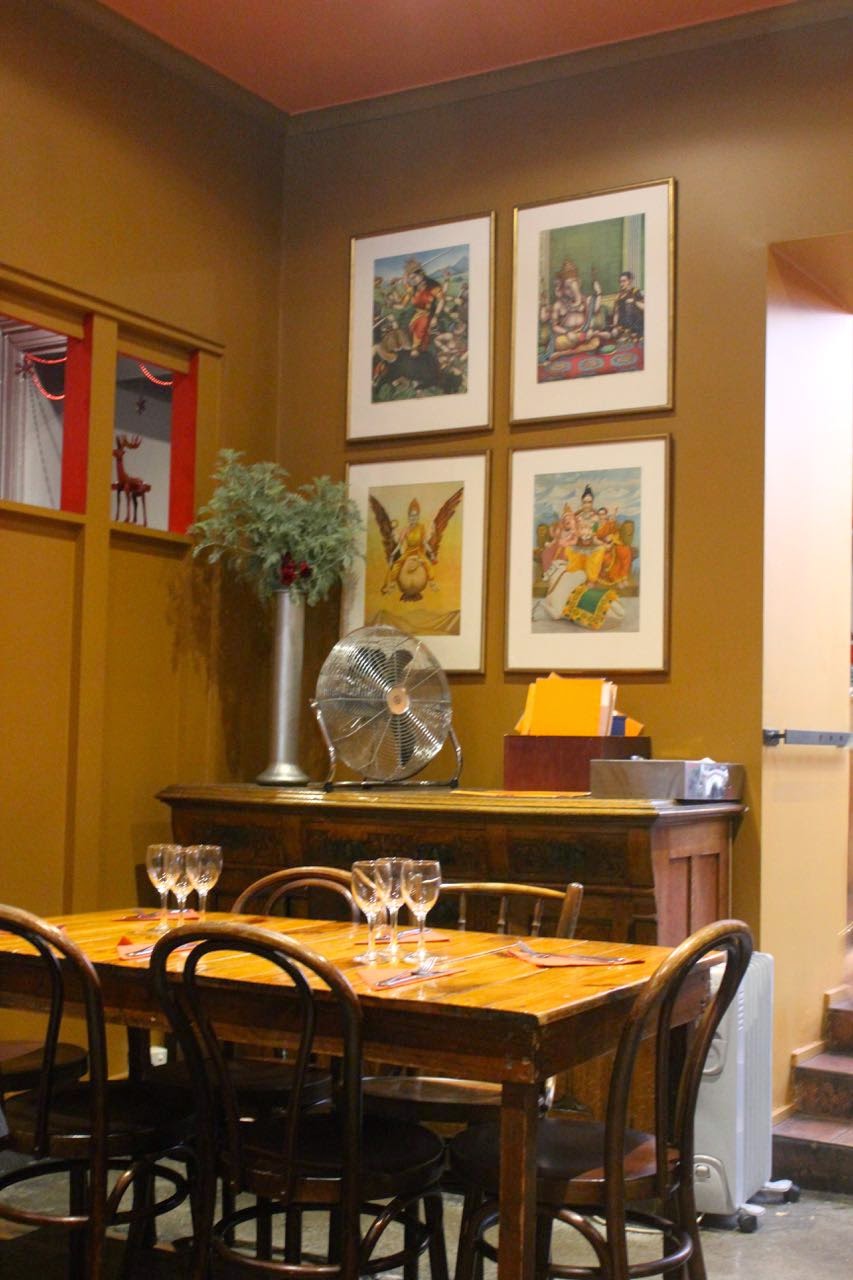 E and I had dinner at Shakahari's a few weeks back.  The weather was mercifully cool.  Last time we ate there it was 43 C and the air conditioners struggled so much that I found it hard to enjoy the food.  This time I really enjoyed my meal.  Even so, the food felt a little less exciting than in the days when good vegetarian restaurant food was hard to come by.  (Just check out these examples of today's great Melbourne cafes/restaurants.)

It must be hard to keep up with the changing world of restaurant food when you have been in the business this long.  Yet Shakahari has a mixture of old favourites and some new modern dishes.  They include lots of vegan and gluten free options.  I love the lovely terrace house with warm mustard yellow coloured walls and minimal zen furnishings.  My one problem with it is that it is really noisy.  Which wasn't great on this recent visit with E's soft voice and his blocked ears.  Next time I book I might ask for the tables towards the back which seem quieter. 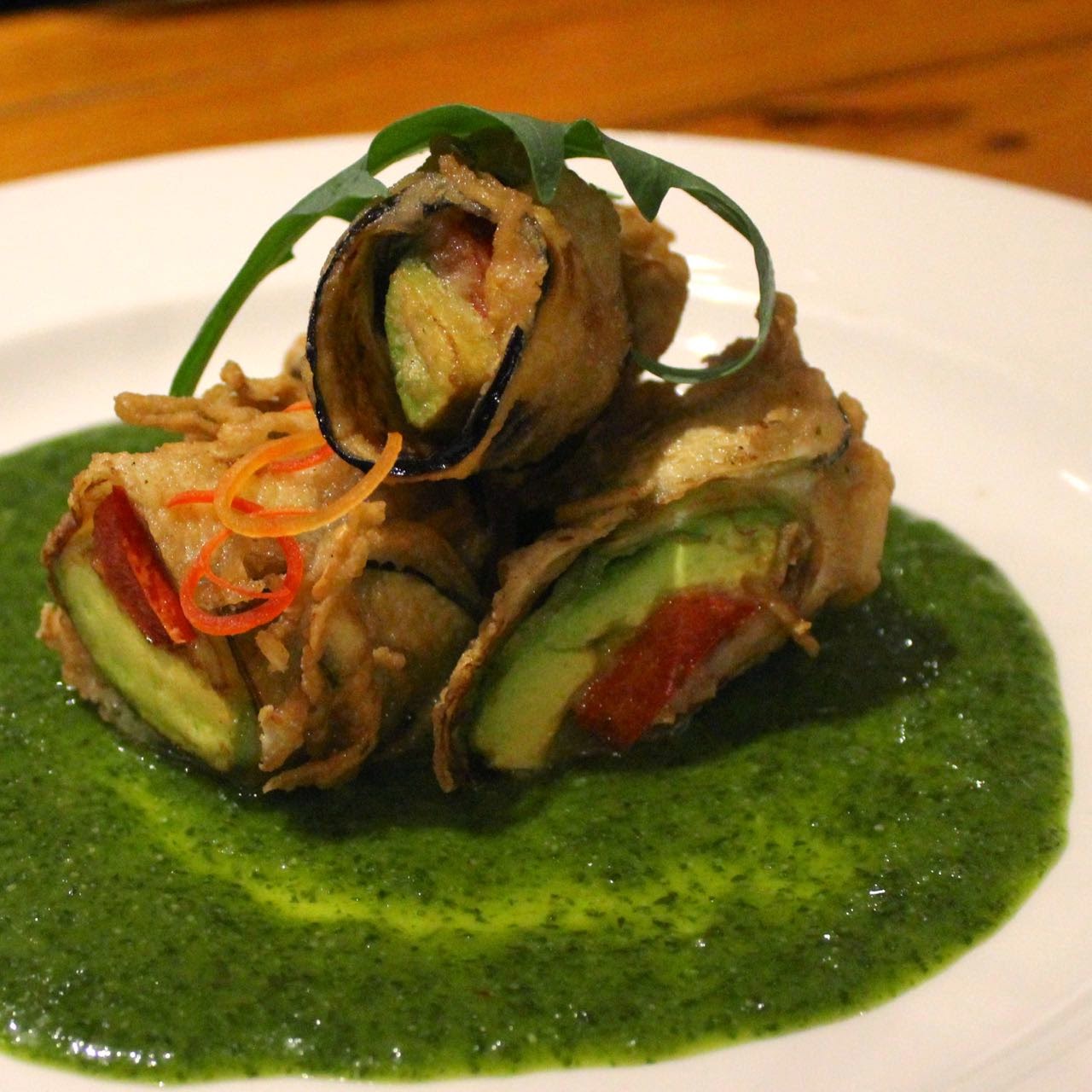 We shared a starter called Avocado Magic. Wedges of avocado and red capsicums are rolled in thin eggplant slices then 'tempura' fried in a rice batter and served with a gorgeous green sesame coriander puree. The crispy tempura batter contrasts beautifully with the creamy avocado.  It tastes amazing and frying avocado in batter is something I would never dare attempt at home.  In fact I think it was my favourite dish of the night. 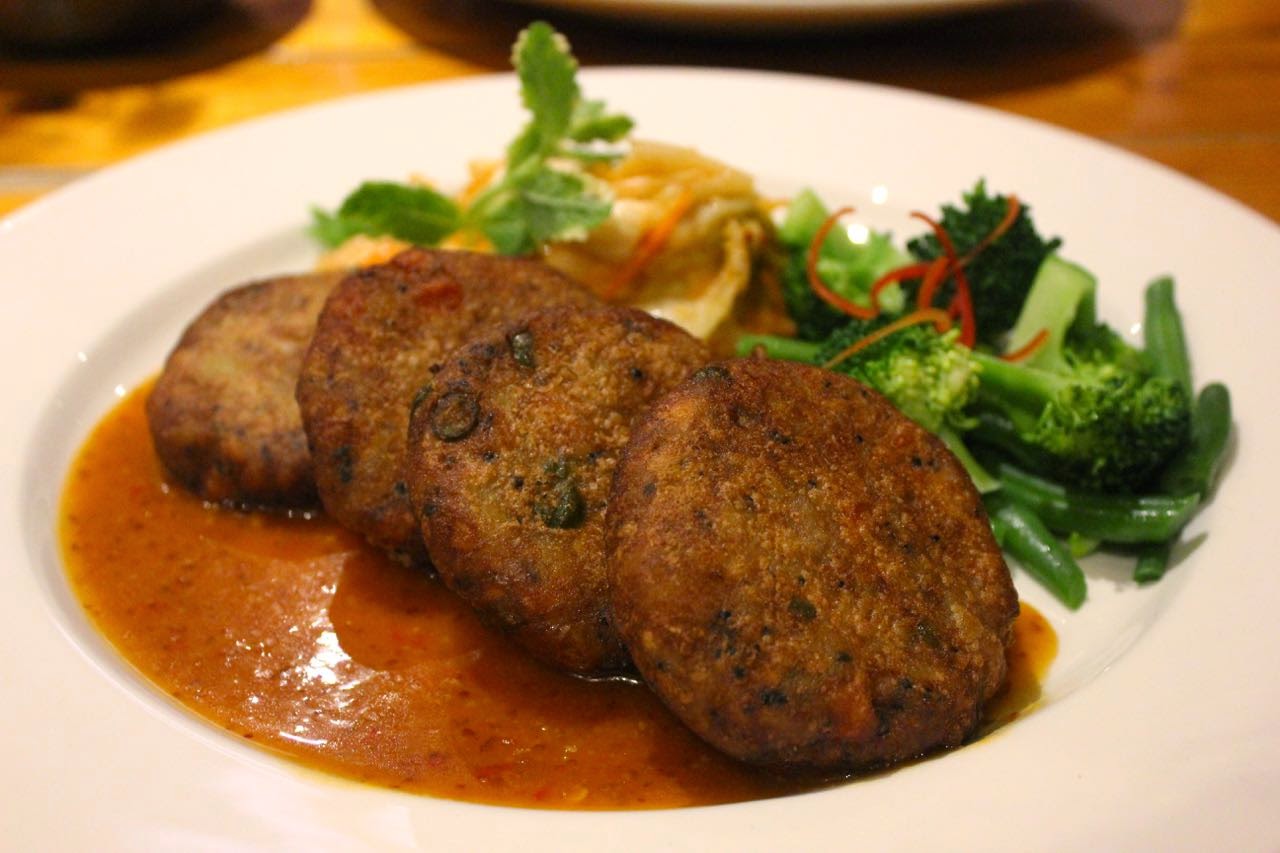 For main course I had the quinoa croquettes.  These croquettes are made of yam, dark quinoa, buckwheat, macadamia nuts and diced vegetables.  They were crunchy on the outside but soft and pillowy on the inside like mashed potatoes but with lots of interesting textures that hovered on the tip of my tongue rather than dominating.

This is the sort of comforting old school dish that I might have expected to find in the 1970s when Shakahari opened.  Yet like a lot of Shakahari, it had been modernised with add-ins that would have been unusual a few decades back.  As well as quinoa and macadamia in the croquettes, they were served with kim chee, steamed greens and a mild chilli onion wasabi puree.

I am not familiar with kim chee.  It certainly gave the dish a kick, while the broccoli and green beans were nicely cooked so they still had some crunch, though a bit cold.  As a chilli wuss, I cringe at the suggestion of chilli and wasabi in my dinner.  So I consider it a triumph that the mild chilli onion wasabi sauce was so good that I wanted to eat it by the spoonful. 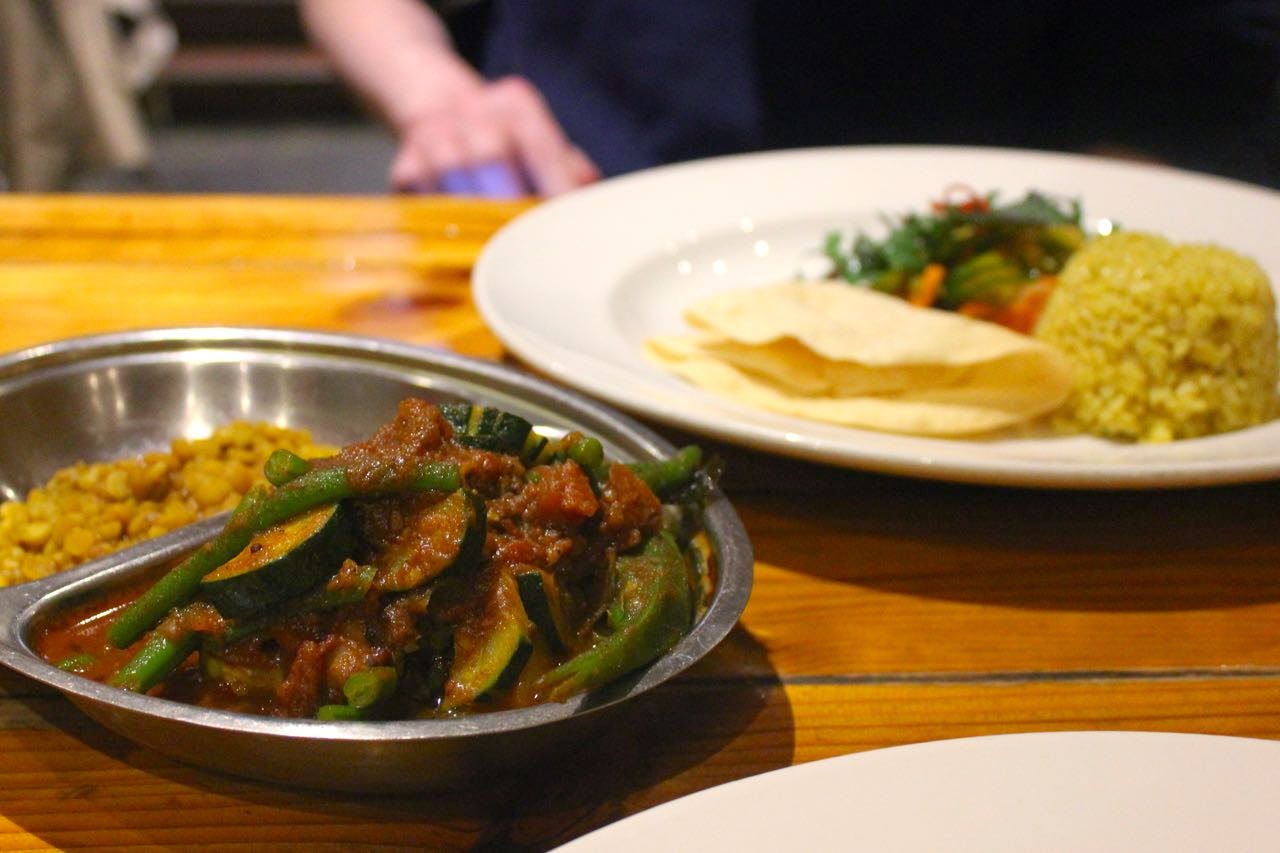 E chose the Rasaan Vindaloo.  It was a mild vegie curry accompanied by turmeric rice, chutney, cucumber pickles, yellow split pea dhal and pappadam.  I had a taste and then wanted more.  E wasn't keen to share!  Both of us were surprised it was not very spicy given that it was called a vindaloo.  But we were not disappointed by the dish.  All the components came together in a most pleasing way. 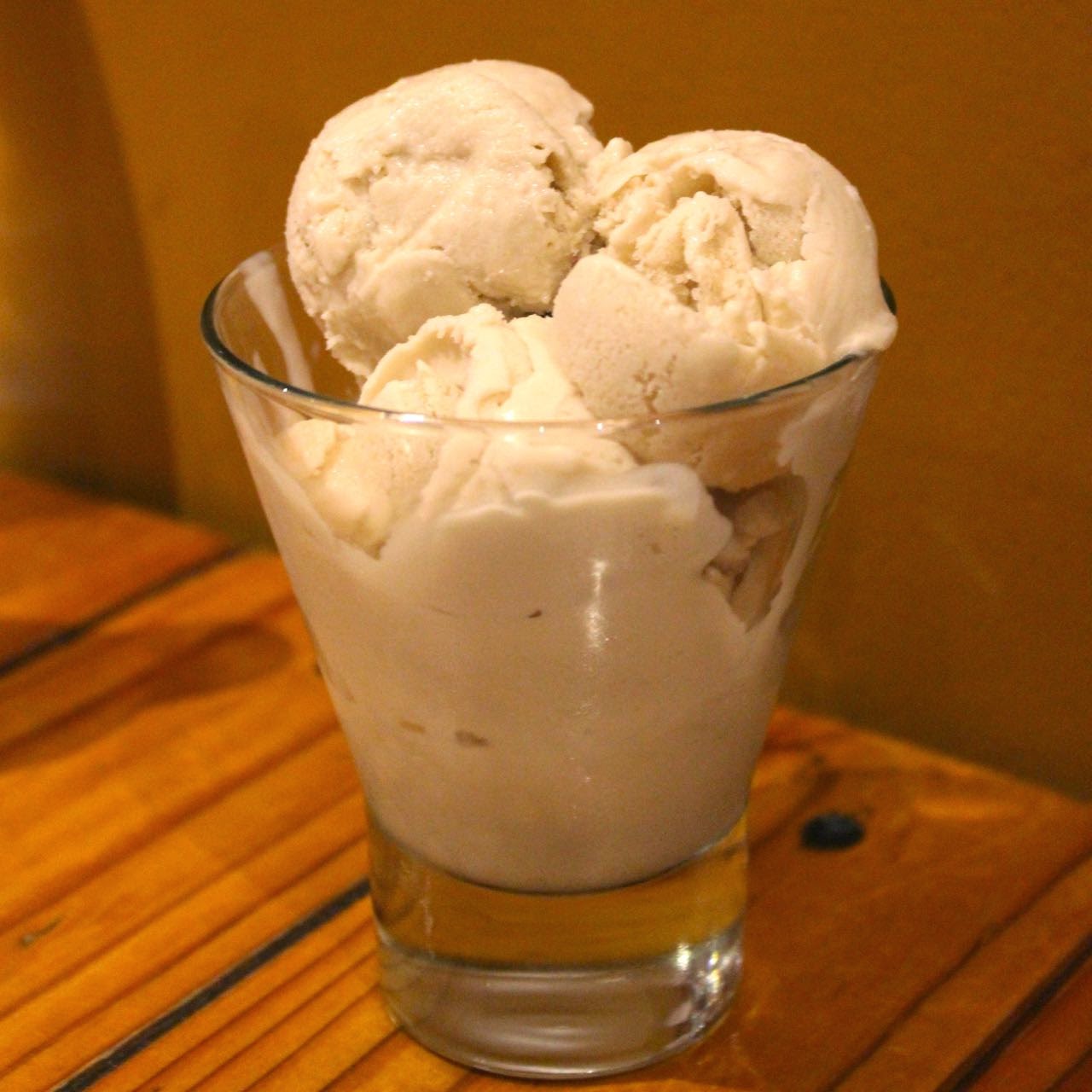 We both found our desserts disappointing but sharing them made them work.  E chose a vanilla soy ice cream.  He found it a little bland on its own.

As there was no warm chocolate pudding on the menu (sob), I chose the Avocado Chocolate “Cheesecake”.  It is a "raw cheesecake with a walnut and date base filled with a mixture of avocado, Calibut chocolate powder, maca powder (‘Peruvian ginseng’), coconut sugar and vanilla bean (Non-dairy, gluten free, raw)."  The chewy base was very good but I found the chocolate filling rather bitter (and not at all like a cheesecake).  It was served with a lot of mango which I didn't fancy. Fortunately the tart was very good with some of E's ice cream.  And he really enjoyed his ice cream with some of the tart mixed through it.  They worked so well together than we might have yelled out "teamwork" and given each other a high five.  But we are not that demonstrative and beside we were finding it so hard to hear each other it probably would have gone "Teamwork", "What's that you say?"  "Come again?"  "Who's going beserk?"  Besides we were busy signalling a waiter for our bill so we could rush off to the cinema.

Shakahari was very busy.  No table seemed to be empty long.  Given the amount of diners, the service was friendly and prompt.  We managed to eat three couses in the one and half hours before our movie.  I got a little nervous we would be late and asked a waiter we had time for dessert.  In response it was brought out promptly.  We got to the Imitation Game in plenty of time.  Which was just as well because it was an amazing movie.  A lovely night out while Sylvia was on a sleepover!