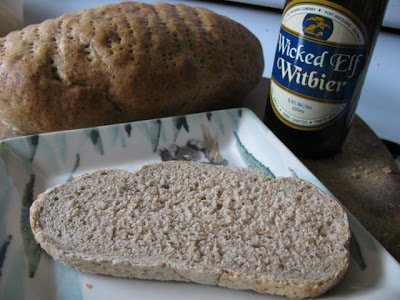 I mentioned recently my bread baking binge that took place after I bought fresh yeast. The first bread I made with it was a Finnish Rye Bread that I have had written in my recipe notebook for years and years. Don’t know where I found it nor can I remember when I first made it but I have marked that I did somewhere back in the mists of time. More recently I have made it twice and it was quite different each time so I wish I could remember the other times. 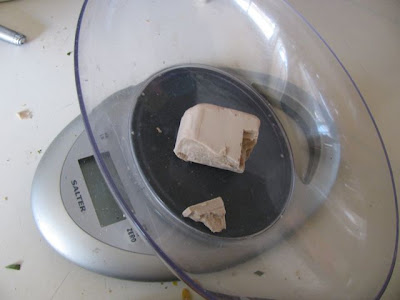 A bag of rye flour had been sitting in my pantry far too long and I decided to make bread with it. Nigella has a recipe for rye bread that I almost tried but instead I decided to make a recipe that produced two loaves some weeks back when I was going to visit my grandmother. That way I could taste it to check it was ok and still give her a complete loaf. 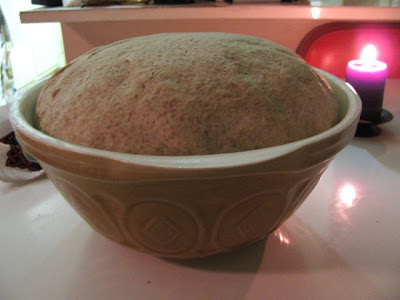 This recipe is one where the liquid is warmed and then needs to cool so it takes a bit of time. Although the recipe below specifies that the liquid can be potato water, milk, beer or buttermilk, I prefer beer. My scribbles note that it makes the bread more sour. I think it also gives more flavour.

The dough, according to the recipe, should be left to rise for about 2 hours to double in size after kneading. When making it a few weeks back, the dough rose at a frighteningly fast rate. Maybe I had put too much yeast or had the heater up too high. I punched it down and put it in the fridge to retard the rise but it threatened to take over the fridge with its incredible rising. My aunty Liz laughed at the fork marks on the loaf and said they looked like I made them fighting the monster dough. (“Back, back, I say, you beast!”) 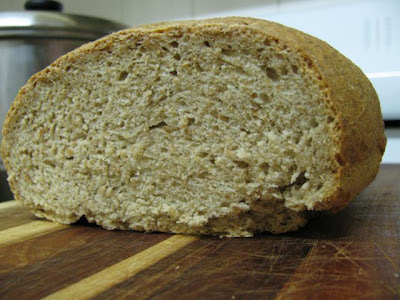 My grandmother had a quiche and salad for lunch, for which the bread was a fine accompaniment. She and Liz were very nice about it although I was worried it was much lighter than it should have been. I enjoyed the main course but loved her home-made scones and strawberry jam even more. (Haven’t I told you that women in my family love baking scones!) Sylvia got lots of cuddles and in return giggled a lot. 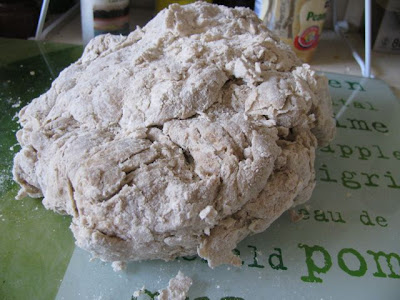 My second recent attempt at the rye bread was quite different. I had the fresh yeast instead of dried and I used beer rather than water.The dough was much stiffer and took a lot longer to rise this time. It made a couple of dense loaves with a far more pronounced yeasty taste. I also remembered to brush melted butter over the top when it came out of the oven the second time, which gave it a pleasing gloss. 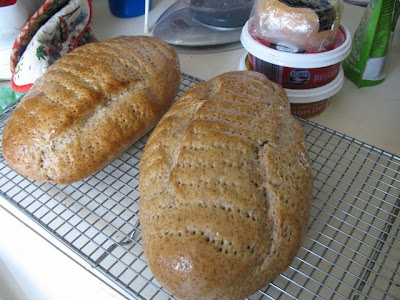 On this second occasion I was pleased with being able to make the loaves in the morning so I had warm bread for lunch with my work mate Penny. She had come over to brainstorm and gossip (not necessarily in that order). While I looked after Sylvia, Penny sliced up bread and vegetables. She had brought over dips, cheese and chocolate so we ate very well. 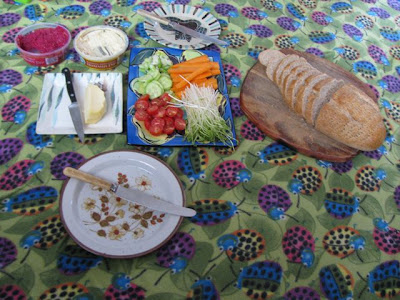 Lunch was a relaxed business. We put Penny’s pretty platters on the rug and piled the fillings on the bread. Delicious! I tried to move everything away from Sylvia’s eager reach but she still managed to dip her hands in the beetroot dip and then fall face first into the platter of vegetables. 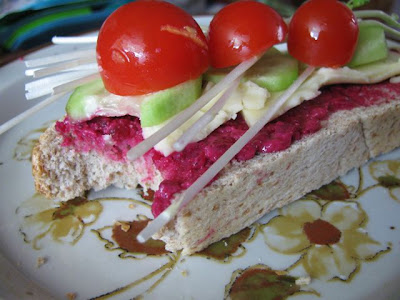 Later that day I went to the city to meet E and my dad for dinner before seeing Strange Fruit performers ringing in the opening of the Melbourne International Arts Festival on the Federation Bells. We had thought there would be food around the bells but ended up having to rush back to Fed Square for dinner. I wished I had made up some sandwiches with my bread. But we found a delicious curried pumpkin and lentil soup at ACMI and managed to return and hear some of the calming call of the bells. 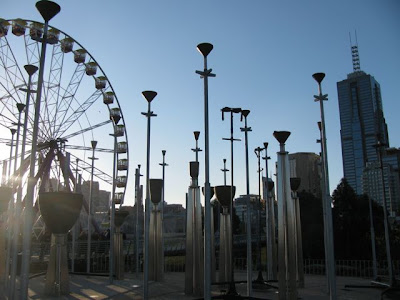 I am sending this bread to Susan at Wild Yeast for her Yeast Spotting.

Heat the beer/buttermilk/milk/potato water to lukewarm and stir in butter and salt. Set aside to cool.

If using fresh yeast dissolve yeast with sugar in a small bowl and then add to warm water and sugar in a large mixing bowl. If using dried yeast, sprinkle yeast and sugar over warm water in a large mixing bowl. Leave about 5 minutes until bubbling. If it doesn’t bubble feed the yeast a little flour and leave another few minutes to see if it bubbles.

Pour cooled beer/buttermilk/milk/potato water mixture into yeast mixture and mix. Add rye flour and stir until smooth. Add bread flour, one cup at a time to make a stiff dough. Form into a rough ball and place on a floured surface. Cover with a damp tea towel and rest for 15 minutes. Grease a large bowl.

Knead dough until smooth. This should only take about 5 minutes because the gluten in rye is more fragile than in wheat. Place in the prepared greased bowl, turning to coat all sides and cover. Let rise in a warm place until doubled in size – the recipe says it should take about 2 hours but it took less for me.

Punch down and knead for about 1 minute. Divide in two and form each portion into a loaf shape. Place loaves in greased 23cm cake tins or on greased baking trays. Cover and leave to rise for about 30 minutes or until almost doubled in size.

Brush with water and gently puncture surface with a fork. Bake at 190 C or 375 F for about 30 minutes or until the bread is golden brown and sounds hollow when tapped. (I found I needed to turn mine upside down after 30 minutes and bake another 10 minutes to crisp up the bottom). Brush with extra butter or margarine and cool on a wire rack.

On the Stereo:
Under the Covers, vol 1: Matthew Sweet and Susanna Hoffs