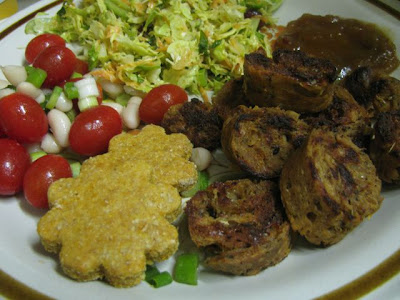 This week I finished reading Julie ad Julia: My Year of Cooking Dangerously by Julie Powell. Now that it is a major motion picture you probably know it. If not, it is the story of blogger Julie Powell who cooked all the recipes in Julia Child’s Mastering the Art of French Cooking in a year. While I am not that interested by the cooking, I understand some of the all night cooking adventures and long suffering partner waiting patiently for dinner. Indeed, that has been my story this week.

I was really interested to hear about the experiences of another blogger but her experiences in 2002 suggest that blogging has changed quite a bit today. Honestly, if she was a food blogger today I would be unlikely to visit her blog regularly. Her attitude to meat – liver is sexy, isn’t it funny killing lobsters, and her embrace of marrow, aspic and offal – just isn’t something I can enjoy. 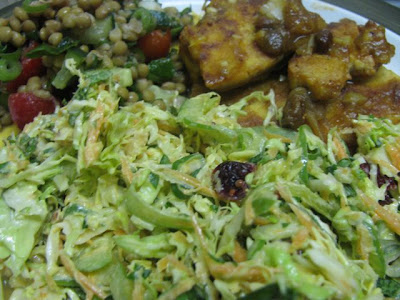 I have never been a great fan of French food because it is full of meat, cream and butter. Not at all my thing. As for Julia Child, I find it interesting to read American bloggers talk about how significant she was in changing the face of cooking in America. She has barely rated a mention in Australian cooking history so she brings no nostalgic value for me.

I could identify with some of Julie Powell's blogging stories. The late dinners, the kitchen groaning under piles of dishes and the enjoyment of comments. I even felt a little comforted that she had disasters even worse than mine, such as a maggot colony in her kitchen. But there were no mention of photography. In fact, I wanted to see photographs throughout the book because that is important with food blogging. I also found that she talked about her blog readers (or bleaders) but never about visiting other blogs. She presents blogging as a performance rather than a communal activity. Maybe this has changed as blogging has developed. 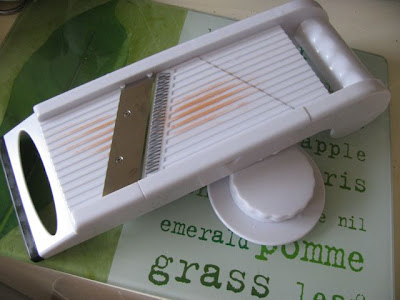 One other element of blogging that was missing, due to her focus on one cookbook, was the tyranny of choice. So many great recipes, so many interesting variations. This week I have had to make difficult decisions over coleslaw and vegetarian sausages, both of which have many interesting version.

It started with cabbage and carrots on sale. I decided to make coleslaw. Normally I would chop just a bit of the cabbage but I have a new mandolin slicer and thought I would try that. It was so easy before I knew it I had sliced up half a cabbage. I had so much that I thought I would take advantage of the opportunity to try two dressings. Both were great in their own way. 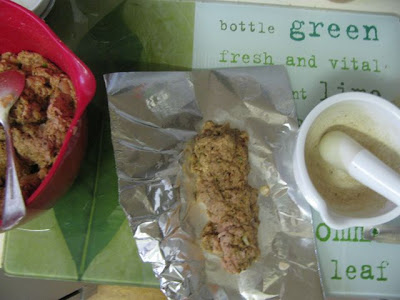 I had intended to dig out some coleslaw recipes but was too overwhelmed because everyone has their own variation. Instead I winged it using what was in the fridge, the pantry and the herb garden. After all, although I don’t tend to make it often, I have made coleslaw enough not to really need a recipe. One coleslaw had an Asian style dressing with crunchy peanuts and spicy ginger and cayenne. The other was more Western style with the sweet cranberries as foil for the tangy mustard.

The first night I thought it would be a nice quick meal to whip up but it was after 8.30 that I served it. Alongside it were Apricot and Orange Glazed Tofu and leftover Lentil Salad. But I kept thinking how much I associate coleslaw with barbeques so Michael’s Chorizo Sausages came to mind. 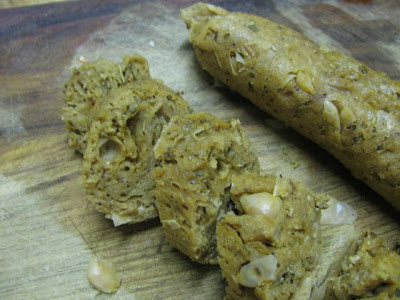 I have talked before about how much I love vegie sausages. The idea of being able to easily produce my own appealed. I first wanted to try this gluten flour method very soon after starting blogging when I discovered the Seitan O’ Greatness from the PPK Forums. Then I saw the vegan irish sausages on Fat Free Vegan Kitchen which were adapted from Julie Hasson’s spicy Italian sausages. I wanted to try all three recipes but barely had time for one. So you see the dilemma bloggers facing like me with all the blogosphere plus oodles of cookbooks.

I followed Michael’s recipe, which came from Isa Chandra Moskowitz’s latest cookbook, Vegan Brunch. They had a lot of spice so I reduced it considerably and added black pepper and fennel a la Julie (Julie Hasson, not Julie Powell). With a little more tweaking, they were finished. Sounds simple? Not when you are ready to eat and you realize the sausages need to steam for 40 minutes and then be fried. And everything takes longer with a baby. Not to mention the garlic crusher breaking mid-crush! 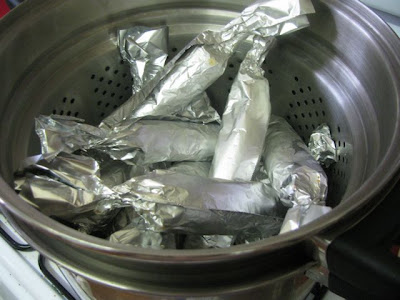 One reason I haven’t made these gluten sausages is my dislike of seitan and hence a suspicion of any food containing too much of it. The sausages were full of flavour, though not overly spicy, but they had a little of rubberiness of gluten. Truth be told, I think I preferred the Mushroom Chestnut and Couscous Sausages I made last year. I might have liked the gluten sausages more if I had managed to make them thinner. I did like the way they crisped up when fried, though I am still to try them under the grill, which is my usual way. 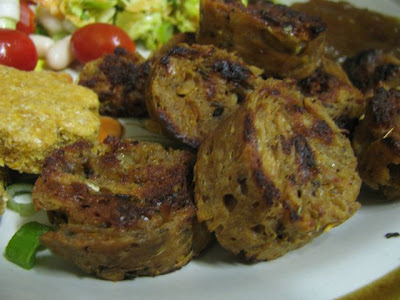 But the fried sausage slices, coleslaw, tomato and cannellini bean salad, and smoky spicy crackers was quite an impressive meal. Food bloggers might take their time over dinner but we do eat well.

Now I just need to think about how to use the other 6-8 sausages in the fridge. Sausage curry, anyone? Some other ideas below for cooking with vegetarian sausages:

Mash the beans in a large bowl and add the other ingredients in the order listed. Cindy had gluten flour halfway up the list but I think I would prefer to put it in last because it went all rubbery before I finished adding the ingredients. Stir everything well. I ended up using my hands and sort of kneading it in the bowl.

Prepare the steamer so it is ready for the sausages. To steam them all at once you will need a large one. I used my pasta insert in my stockpot to steam them.

Tear off 8-10 sheets of aluminium foil which are about 15 to 20 cm wide. Using your hands pull off a small amount of dough and roll into a rough sausage shape. Place lengthwise along the foil and then roll up tightly in foil. Squish foil at each end (but I found if I twisted it, it broke) so it looks like a Christmas bon bon. Place in the steamer and seam for about 40 minutes.

Unwrap to use and store in fridge for a week or so. I image they will freeze but haven’t tried it. Great sliced and fried.

Mix cabbage, carrots, capsicum and spring onions. Place two thirds of mixture in large salad bowl and mix with cranberry and mustard ingredients. Place the remaining third of vegetable mixture in a medium salad bowl and mix with peanut and line ingredients. Will keep for a few days in the fridge but may need extra mayonnaise and/or yoghurt after being kept in the fridge as it gets drier when it sits overnight.

On the stereo:
The Best of Focus: Focus