Beauty and the Beast for World Bread Day 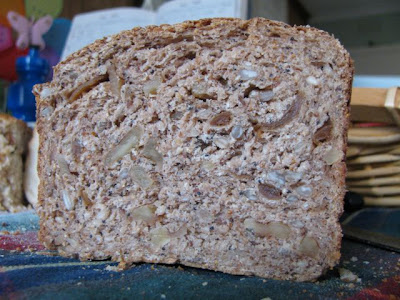 “If you have two loaves of bread, sell one and buy hyacinths to feed your soul.”
Quote on my mum and dad’s bedroom wall when I was a child.

A couple of weekends back I found some fresh yeast for sale in a local bakery and couldn’t resist buying a block. It was a great motivation to bake bread and I made three different loaves. Today is World Bread Day so I will celebrate by telling you about the best and the worst of these loaves: my beautiful Walnut and Fig Bread and my beastly Johannadama Bread.

I have told you before about baking bread with my mum. A block of fresh yeast brings back memories of stirring sugar into yeast in her kitchen as a child. The magical transformation of a solid block into a gooey liquid still delights me. But I don’t see it in the shops often so when I did recently, I snapped up a block. E thought it was fudge and was disappointed. But I love that smell and the memories it stirs up. When I spoke to my mum she said I should use it quickly – within a week – and check it bubbles after about a week to see it is still active. 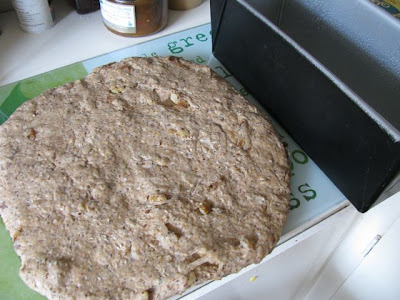 I made some Rye Bread last Friday and will tell you about that soon. By Tuesday I still had 45g of fresh yeast that was over a week old. It needed to be used. I started the day baking a potato boston bun with mashed potato leftover from Sylvia’s potato, zucchini and asparagus mash. I then turned my attention to the demands of the yeast.

Some weeks ago I had seen a Hit the Trail (Mix) Bread baked by Sarah on What Smells So Good when perusing Susan’s Yeastspotting. It looked so yummy with lots of fruit, nuts and seeds. I had lots of walnuts and decided to make it with cranberries and walnuts until I discovered I was out of cranberries. Oops! But I had figs so I made it with figs, walnuts and lots of seeds, which makes up a lot of bulk given that this bread has only about 2 cups of flour. I made quite a few changes, including letting the yeast sit 5 minutes with the maple syrup and a little flour to check it would bubble up to show it was alive. 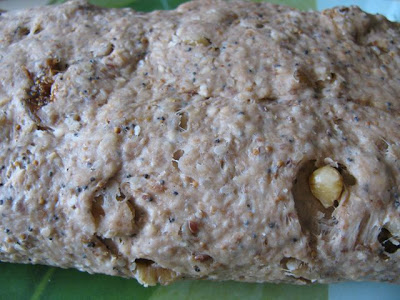 When my mum arrived I was just about ready to put the bread in the oven. It is nice to be able to get advice about it. She suggested I let it sit a bit longer because the yeast was a bit old. When the bread came out of the oven we both had a slice and thought it delicious. It was quite dense – not as soft as Sarah’s looked – and a lot of the figs had not kept their shape with all the kneading but it was nutty and seedy and just slightly sweet. Once it cooled, it was delicious toasted with just a smear of butter. 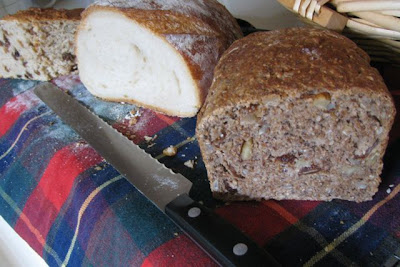 I gave my mum some boston bun and walnut and fig bread to take home. She gave me half of her sourdough loaf she had queued for in the burbs. You would have thought I had enough bread in the house but I still had yeast that needed using so I was foolhardy enough to attempt another loaf to take to a friend’s for lunch the next day. Here was where I came undone.

I looked for a recipe to use up the yeast. It was all about the yeast. I had wanted to make Anadama Bread for ages. It gets its name from the molasses and cornmeal, which, according to tradition, a husband was left with by his wife and he used it as the base to make bread, cursing “Anna damn her”. (E would just go down the street for a loaf of bread, but I guess times have changed.)

I didn’t have molasses so I used treacle. I ran out of treacle and used some honey. I ran out of honey but there was just about enough. The molasses, butter, and cornmeal were heated and then left to cool. It took forever for this to cool. I would not normally wait but I didn’t want to kill off my old yeast. Once it was about cool enough, after dinner, I got out the flour and found not only was I low on my bread flour, which I knew, but I also had hardly any white or wholemeal plain flour. So my cupboard’s had less than Anna’s and the bread became Johannadama. 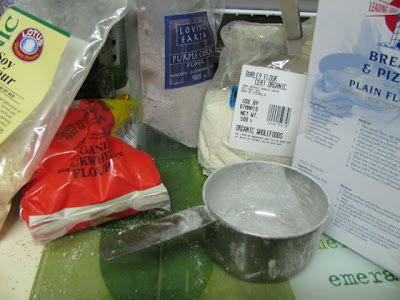 I was determined to make this bread. I got out my rye flour and used it up. Then I used up my soy flour. Then I got out all my flours and added bits of purple corn flour, barley flour, buckwheat flour. There were so many gluten free flours I wondered how the gluten would develop in the bread but I dutifully did the kneading the recipe required and left it to rise. It got too late so I finally punched it down and put it in the fridge overnight.

The next morning, Sylvia had had a bad night and we woke late. I took the dough from the fridge – condensation had dripped where I had left fist shaped indentations. Nothing a bit of kneading couldn’t fix once it was room temperature but I didn’t have time to let it rise in the bread tin and bake before heading out for lunch at Cheryl’s. I was so disheartened I left the loaves to rise while Sylvia and I went out for lunch. It was Sylvia’s first lunch out of the house so I was a little distracted anyway.

I got home late after driving through heavy traffic. I had promised myself I would go to Lisa Dempster’s launch of her book Neon Pilgrim at Readings Bookstore. (Lisa is a fellow blogger and the story of her travels on a Buddhist pilgrimage in Japan sounds interesting.) There wasn’t time to bake my bread and E’s train was delayed so I took Sylvia and drove to Lygon Street. 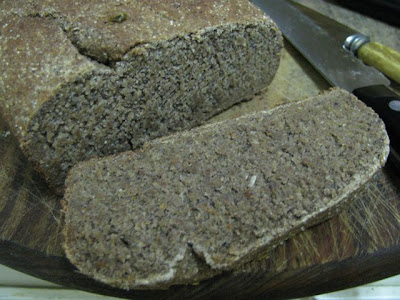 It was Sylvia’s first book launch and she enjoyed meeting some bloggers – Cindy and Michael, Kristy and Miss T. Actually she stared at them but when you are young and cute you can get away with that. I think she would have partaken in the wine and sushi if given the chance. We stood at the back to hear Lisa speak, where Sylvia blew raspberries and yelled (which I am sure was a sign of her appreciation). I was sorry not to say hello to Lisa but it was time for Sylvia's dinner so we left early, bought plain flour at the supermarket and headed home to E and Zinc.

When I got home, the polenta I had planned to serve for dinner had gone grey, the avocado was still hard but I rustled up some vegie sausages and salad. The bread went in the oven but wasn’t out in time for dinner. The final twist of the knife came when the timer rang and I found that E had turned off the oven when he took his sausages out. 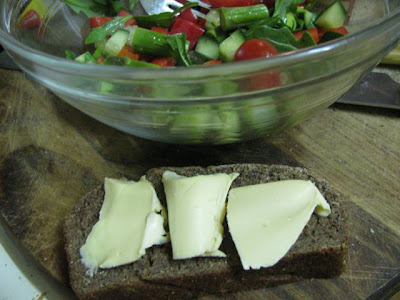 I was amazed to find the Johannadama bread was edible. It wasn’t great but it was interesting. E told me it was like the sort of blunt object that might be used as a murder weapon. He was not keen but I have been eating my way through it. I am not posting the recipe because I would not recommend this course of action to anyone. I even shied away from buying more fresh yeast when buying a loaf of rye sourdough at O’Hea’s Bakery en route to Cheryl’s yesterday.

I am sending my much nicer Walnut and Fig Bread to two bloggers who have given great yeasty inspiration to me and many others: Zorra for World Bread Day and Susan for Yeastspotting.

Stir fresh yeast and maple syrup in a small bowl until yeast becomes liquid. Pour into a large bowl and mix with warm soy milk, warm water, oil and ⅓ cup of bread flour. Leave for about 5 minutes until it starts to bubble.

Mix in flours, oatmeal, flax seeds and salt. It will be quite soft and sticky. Now mix in nuts, figs and seeds. I used my hand to mix these in the bowl. Turn onto a floured board and knead for about 12 minutes until the dough is smooth and supple.

Place in a greased bowl, cover with clingfilm and rest for 30 minutes (I did it for 1 hour). Punch down and shape into a flat rectangle. Roll into a log or fold up and pinch seams to seal it. Place in a large greased loaf tin. Allow to rise for 1 hour (I did one and half hours).

On the stereo:
Fragile: Yes