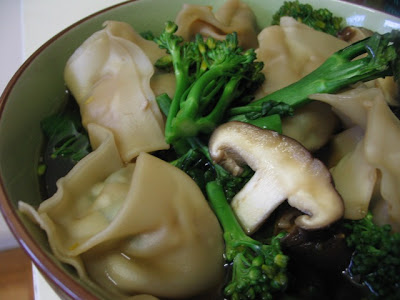 After a week in Darwin, I was so happy to be back in my kitchen last night. I needed temple food. This is a Nigella term that I like. She talks about the approach to satisfy our vanity rather than health needs in How to Eat. But it is also about counteracting a bout of eating out in places that are mean-fisted with their vegetables. I think temple food would be my version of detox if I was more into self-discipline or self-denial.

I had been craving a bowl of miso soup full of vegetables and tofu but I also wanted to make a special soup for Lisa and Holler’s new blog event, No Croutons Required. They challenge bloggers to make a vegetarian soup that the most carnivorous diner would drool over. And I’ve been wanting to make more recipes from Denis Cotter’s Wild Garlic, Gooseberries and Me…

I have been meaning to make broth-based soup for a while now. I have admired other bloggers making broth soups like Lucy’s Zucchini in Broth with Cornmeal and Cheese Dumplings and Vegetarian Chicken Passover Soup, Culinary Bazaar’s Vegetarian Vietnamese Pho Soup and Andrea’s Vegetarian Stock that she uses in French Onion Soup. These soups all depend on a well-flavoured broth.

The soup I fancied is one Denis called ‘Sprouting Broccoli and Oyster Mushrooms in Ginger Broth with Pumpkin and Macadamia Dumplings’. What a mouthful! Fortunately I tweaked it to suit my tastes so I can simplify the name without guilt. I find oyster mushrooms too flaccid and I am suspicious of anything named after seafood, so I substituted swiss browns. I did away with the 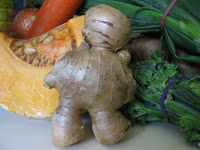 coriander and the macadamias and to add some carrot for some colour. I also used less oil and less soy sauce.

I couldn’t claim this soup would convert meat-and-potato carnivores but the adventurous will be thrilled. E was not so keen on it because he doesn't like watery soups. I loved it. The broth was wonderfully spicy thanks to my wee ginger man (check out the photos – E wanted to try and sell him on E-Bay because he was so adorable). The sweetness of the pumpkin in the dumplings was just right in the salty spicy broth. And I had plenty of vegetables. I loved the crisp green broccolini but E thought it underdone.

This was the soup I needed. It treated my body like a temple and fed my soul.

Update 1 March 2008:
There were 71 soups submitted to Lisa and Holler's No Croutons Required event. Amazingly, they had a vote on the best soup and I was the winner. Well the credit really goes to Denis Cotter because it is his recipe, but I still consider it an honour to be singled out among such wonderful soups. Please go to the impressive round-up to see all the other tempting soups sent to Lisa for the event.

Wanton Dumplings in Ginger Broth
(adapted from Wild Garlic, Gooseberries and Me…)
Serves 2 very hungry people or 4 as starter or light meal

Begin by preparing the broth: Place all ingredients except soy sauce into a large stockpot. Bring to the boil and simmer for 20 minutes. Add soy sauce and sit for another 20 minutes. Strain.

While the stock is simmering, make the dumplings: Steam or microwave pumpkin. Mash and add nuts, lemon zest, lemon juice, and basil. Stir to combine. To make the first dumpling, place 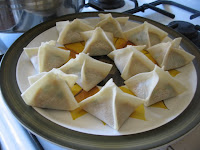 wanton wrapper on clean flat surface. Place a teaspoon of the pumpkin mixture in the middle. Have a small dish of water beside you and use your fingers (or a brush) to moisten the edges. Bring two opposite corners up together and then bring the remaining two corners up so the four corners meet together like a pyramid – press the edges together to eliminate any air from the dumpling parcel. (Tip: it is easiest to handle if your fingers are dry). Repeat with remaining wrappers til all the mixture has been used up. (But these dumplings don't last well overnight so try to only make what you need.)

While you are preparing the vegetables, gently heat broth and place the dumplings in the broth for about 2 minutes (they don’t take long at all, even when mine had dried out a little).

To serve the soup, place the vegetables in the bottom of a bowl. Spoon the dumplings on top of the vegetables. Ladle the broth into the bowl.

Note: I had a little broth leftover because I had to water down the strong tasting broth. The soup doesn't keep so well overnight but I will see if the leftover broth can be used up in another soup.

Update: since writing this post, I have found that dumplings can be made ahead of time, placed in the freezer on a tray to freeze. Once frozen, they can be put in a bag and kept in the freezer. They can be steamed or heated in broth directly from the freezer.

On the Stereo:
What we did on our holidays: an introduction to…: Fairport Convention
Posted by Johanna GGG at 20:53