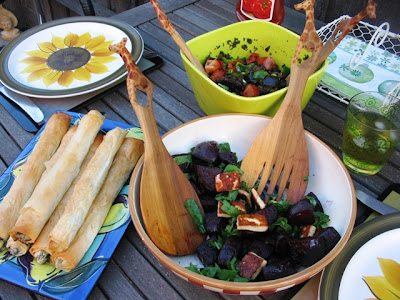 In my family, a birthday is a day when you have a right to be happy. Growing up in a family of seven kids, it was a treat to be able to choose what to have for dinner. These days I usually choose what we eat each night but on my birthday I can indulge myself in something a little special. And only on my birthday can I eat cake in the sunny backyard following a rendition of happy birthday sung by my nieces and accompanied by E strumming along on his new ukulele.

Often a special meal focuses on a central dish like a nutloaf or a pie. This year I wanted something lighter and decided to spend a bit more energy on salads and less on their 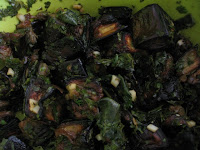 accompaniment. The meal required considerable preparation time and was not one that could be whipped up after work. But it was an enjoyable and leisurely day of food when I was only too happy to let my veggies roast in the oven while I relaxed in the backyard dipped into my new collection of food essays edited by Mark Kurlansky.

The first salad I chose was the Macedonian Salad from The Moosewood Cookbook. It features eggplant roasted and marinated in a garlicky herby lemony vinaigrette. When I worked making salads on kibbutz, we used to make an amazing salad of dark deep fried eggplants in just such a sharp vinaigrette and it was one of my favourite salads. But it requires some time to let the eggplant roast and then soak up the flavours.

I drizzled olive oil over the eggplant and put it in the oven to roast for 15 minutes as instructed. At the end of that time it still looked like pale rubbery pieces of sponge. I sprayed it with olive oil and returned it to the oven for another 20 minutes and it still looked the same. I put it back for another twenty minutes but by now my nieces had arrived and we had to inspect Zinckie cat’s 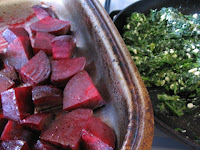 sunburnt ears and one thing led to another. By the time I remembered the eggplant it had been in the oven well over an hour and had gone dark and wizened on the outside and meltingly soft inside. I then left it to marinate while I played with the wee girls.

The second dish is a beetroot and haloumi salad that Wendy made some months ago. I liked the simplicity of the lightly seasoned chunks of roasted beetroot with the salty nuggets of haloumi. It took me longer to cook the beetroot than Wendy which I suspect were because my beets were bigger than hers – and this is a situation where bigger is not necessarily better!

While thinking about what might accompany the salads, I came across a recipe for Moroccan filo cigars made by Ariela at Baking and Books . They appealed to me. It seemed easy, and the idea of a cigar on my birthday seemed fitting – makes me think of 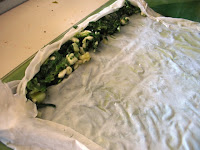 decadence and luxury, of the Victorian aristocrat in a smoking jacket, of the liberated woman writer in 1920s Paris, of the generous millionaire in the USA.

I don’t use pastry that often so it always makes me a little anxious but this wasn’t too difficult. Ariela gives a choice of two fillings –spinach cheese or potato cheese. It could be done with any filling, and in fact I made quite a few changes to suit what I had on hand (her recipe had choices of other cheeses such as fetta, ricotta, gruyere). I did hope they might be so crisp that I could have fun waving one around like you might a cigar but they were too long and bendy – would shorter ‘cigars’ be better, I wondered. (My answer was found when I reread the method and discovered I'd missed the bit about cutting the filo pastry in half!) Nevertheless, they tasted great and I will make them again – they were light enough not to dominate the meal, the leftovers froze easily and the also made great picnic food.

Happily, my cigars and salads got along famously. It was a pleasant evening, sharing good food and intelligent discussion with E in the backyard. If I had said to E that dinner would centre 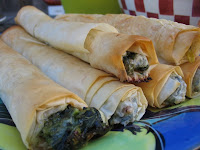 around eggplant, beetroot and spinach, he would have run a mile, but he was pleasantly surprised by the eggplant and tucked into dinner with delight, as did I. The only improvement would have been a good sauce for the cigars rather than supermarket tomato sauce but hope is in sight – my mum has just made her yearly batch of tomato sauce so a bottle or two will be coming my way soon.

Place eggplant in a roasting dish. Drizzle with a little olive oil and toss to coat. Roast til dark and soft in a 375 F oven. The time will depend on your oven – Mollie says 15 minutes but it took me over an hour. The success of this recipe depends on the eggplant being well cooked so don’t be afraid to leave it a little longer if you are unsure if it is done. At about 20 minute intervals I took tray out to spray eggplant with olive oil and toss.

Meanwhile combine olive oil, vinegar, garlic, salt, pepper, herbs and lemon juice in a medium sized salad bowl. When eggplant is cooked and still hot, place it in this bowl and toss with the marinade. Let it sit for at least 2 hours – this can be one several days ahead and kept in the fridge.

Add remaining vegetables. Toss and serve. Garnish if you wish. Mollie says to add vegetables within an hour or so of serving but I omitted the garnishes and found it kept very well overnight and made for excellent leftovers the next day.

Boil the beetroot in their skins for 20 minutes. Cool a little (running some cold water over them helps but in our drought stricken country leaving them for a little while is more environmentally friendly!) Then use your hands rub the skin off (or I guess you could use a vegetable peeler but it never occurred to me at the time). Cut into chunks (of about an inch) and toss in olive oil and seasoning. Roast in 200oC oven 15 mins. Drizzle with balsalmic vinegar, toss gently and roast for 25 mins on top shelf and another 20 mins on lower shelf (I could have done with a bit more time but Wendy had a lot less time so this time is a guide only).

Toss green leaves and spring onions together in a large salad bowl. Add roasted beetroot. Heat a non-stick frypan over medium heat and spray with oil. Add the haloumi and fry for one minute either side until golden brown. Add to the bowl. Squeeze some lemon juice over the salad. Toss.

Sephardic Spinach Filo Cigars
(adapted from from: Olive Trees and Honey: A Treasury of Vegetarian Recipes from Jewish Communities Around the World by Gil Marks via Baking and Books)
Serves 3-4

To make the filling:
Squeeze as much moisture as possible from thawed spinach. Heat oil in a large frypan over medium heat. Cook spring onions in oil for about 1 minute. Add spinach and parsley and stir over medium heat til liquid evaporates – this doesn’t take too long. Add remaining ingredients. This can then be set aside in fridge earlier (or even the night before I think) until you are ready to fill the cigars

Lay the pile of sheets of filo pastry on the benchtop and cut in half lengthwise. Cover pile with a damp teatowel and take out on at a time to fill.

Grease or spray a baking tray. Place one piece of filo on a flat surface and lightly brush with olive oil or melted butter (or like me you could brush with a little olive oil and then spray all of it with olive oil spray – this was much quicker for me). Spoon filling in a narrow stripe about one inch out from the narrow end and leave a one inch border at the top and bottom of the stripe of filling. Fold the top and bottom inch over and then roll from the end with the filling to create the ‘cigar’. You can keep in the fridge up to a day before baking or freeze. (She says not to defrost before baking but I defrosted in the microwave because I was in a hurry the next night and they were lovely when they were baked!)

Unless you are keeping these for later, place on the baking tray as you prepare them. Brush or spray with oil. Bake for 20 minutes (or 30 minutes if baking frozen cigars) til crisp and brown. Serve warm or at room temperature.

On the stereo:
Follow the Music: a commemorative sampler of Elektra’s pre-rock era: Various Artists
Posted by Johanna GGG at 11:20