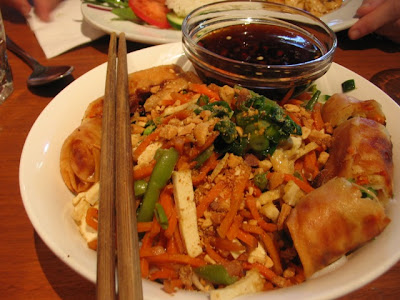 This week E and I had dinner at the Vina Bar. It is a small unpretentious Vietnamese restaurant in Lygon Street in Carlton near my workplace and Cinema Nova, one of the best independent cinemas this side of the river.

Lygon Street is traditionally a street of Italian eateries and some days I just don’t feel like pizza and pasta and I glaze over at all the meaty offerings. Being inner city and close the University of Melbourne means that the street has many interesting shops and cafes and bookstores (even if one megabookstore opened in an aggressive marketing move). It also means it was one of the first café strips in Melbourne that I discovered (no prizes for guessing where I studied).

The Lygon Street that I discovered over a decade ago was quite different. Readings bookstore was a poky warren of shelves further up the street than where it is today. Some fool had decided to open a MacDonalds which never lasted (and this should be a warning to aggressive 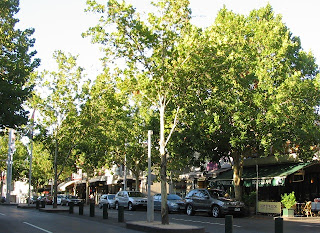 megabookstores). There was no Cinema Nova but the now defunct Carlton Movie House showed an excellent selection of older movies – A Clockwork Orange and Betty Blue seemed to screen regularly. There was a great continental cake shop near the corner of Grattan Street where I had a tantrum as a teenager when I got a chocolate éclair with custard rather than cream – I was an unsophisticated kid from the country. Brunettis was about a third of the size and always crowded. Thresherman's was a lot smaller too. And one of the first places I ate was at Genevieves was on Faraday Street (close enough to be considered Lygon Street) which is now closed. I feel old as I recall all the changes. Sigh!

But lots of places are still about and remind me of the old days – Jimmy Watsons, Trotters, Papa Ginos, The University Café, King & Godfreys, Ti Amo, Brunettis, Thresherman's Bakery and the greasy takeaway on the corner of Elgin Street (but I am not sure if it is still called Twins). I have known Lygon Street long enough to fall in love with it, fall out of love and then rediscover it. Is it any surprise that one of my favourite places to eat in Melbourne is in Lygon Street, albeit one of the ‘newcomers’!

The Vina Bar is a small place with wooden tables and chairs. It has tables and chairs on the pavement which often I prefer to the poky inside tables. Eating outside in Lygon Street is great for people watching. The street buzzes on a balmy summer night. The outdoor tables fill with gossiping hungry groups helping themselves to large wedges of pizza. Couples stroll along with gelati in 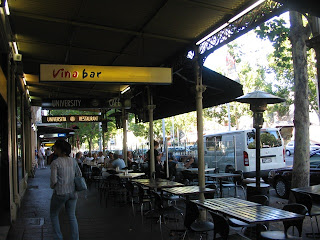 hand. Waiters stand at cafe doorways. The weather was hot and humid this week when we got to the Vina Bar so we sought the cool air-conditioned indoors.

The place has its quirks. They only take cash payments and they don’t sell alcohol (but I think they do BYO). To go to the toilet you have to walk through the kitchen which is reassuringly neat and clean.

The menu has a good offering of vegetarian food: rice paper rolls, spring rolls, noodles, curries, Vietnamese pancakes. Unfortunately the noodle soups don’t have a vegetarian stock. I have been there regularly enough (both with work colleagues and with E) that I have tried all the dishes that interest me and now, like putting on a comfortable old pair of slippers, I just go straight for my favourite meal.

I love the rice vermicelli with spring rolls. It is a large bowl filled with noodles, tofu and vegetables, with some chopped up crunchy deep fried spring rolls, and garnished with crushed peanuts and rice powder. On the side is a small bowl of dipping sauce – more soy sauce than chilli – I usually tip some over the noodles. The vermicelli mixture always feels nourishing with the spring rolls being a bit of a treat. It never ceases to satisfy me.

Update August 2009 - Sadly the Vina Bar had closed - I will miss it terribly.