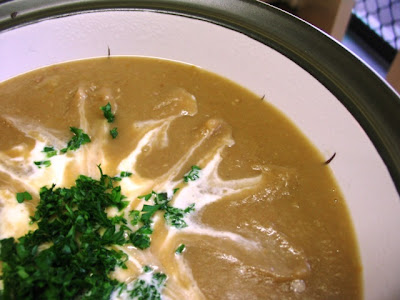 For the Weekend Cookbook Challenge (a blog event created by Sara of I like to cook, and hosted this month by Ani of Foodie Chickie) Ani has asked us to cook something from Nigella Lawson’s cookbooks. As a fan of Nigella, I was only too happy to rise to this challenge.

Nigella, the first lady of British cooking, Mrs Beeton for the noughties, the thinking person's cook, seductive, posh, eloquent, playfully ironic, enthusiastic, bossy, curvy, gorgeous and unashamedly carnivorous. I love her style but cringe a little at her love of meat. I love the passion she exudes on her television shows. Her writing is every bit as sensuous and entertaining as her shows (especially when you can visualise her tossing her hair or dipping her finger in a sauce after watching her in action).

When How to Eat came out, I bought a copy once I found it half-price. I read the book from cover to cover with much pleasure. Her eloquent prose has the friendly and relaxed feel of sitting around the kitchen table. I learnt from her as much I have from friends and family. Her writing is such a delight to read.

So when I looked through How to Eat, while thinking about what to cook for the WCC, I was shocked to find that I hadn’t cooked from it at all (aside from the odd piece of inspiration). It is not that there aren’t dishes that tempt me but most of the meals have meat at the centre and vegetables at the side. The other problem I found was that it isn’t a book that is easy to flick through to find recipes, particularly when so many are meat. There are times that I wish all the vegetarian recipes were clumped together in omnivore cookbooks so I don’t need to wade through all the meat recipes which are of no interest to me.

The other Nigella book that I own is, of course, the legendary How to be a Domestic Goddess. Unlike How to Eat, I haven’t read it from cover to cover but I often flick through the book and drool over the recipes. I have made quite a few recipes (store cupboard chocolate orange cake, dense chocolate loaf cake, millionaire shortbread, Norwegian mountain loaf, potato bread, pizza) 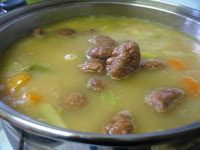 and there are many others I drool over in hope. The photos are gorgeous and glorious. I find the sections much easier to navigate in this book. What's not to love about a cookbook with such a wonderful section devoted to chocolate!

I have also spent some time browsing Nigella cookbooks in shops and libraries. A few months ago I borrowed Nigella Bites from the library and was not very impressed at all. Too much meat and not much I really wanted to cook. But this week, in the interests of research, I borrowed Forever Summer from the library and have found lots to tempt me. In fact it is one of those loans that I don't really want to return.

As I have said above, I really like Nigella’s attitude. Her generosity in Forever Summer makes me fall in love with her all over again. I always love a cookbook writer who encourages readers to fiddle with recipes. But I was impressed with her discussion of sharing recipes: ‘cooking isn’t about suspicious guarding of closely kept secrets but is a matter of sharing, passing on, the almost gossipy dissemination of habits and practices; recipes that are considered high level security documents are not recipes that survive.’

Nigella also appreciates her history. She often dips into her grandmothers’ recipes and draws on many culinary traditions. She is committed to ensuring continuity in food traditions but presents them with common sense and an empathy for the busy modern women. I am reassured when she says that stock powder is fine and it is not necessary to make my own stock. She wants us to enjoy the feeling of being domestic goddesses of the past without feeling overburdened by household chores. I think this is why she is so successful.

So to be asked to cook a Nigella recipe is a pleasure. Making a decision about which one is a dilemma. I have been very attracted to cooking a recipe from Forever Summer or Domestic Goddess because there are so many I want to make. But I felt that the nature of this challenge is to take out cookbooks I might not otherwise make. So I decided it was time to cook from How to Eat.

I chose a simple lentil and chestnut soup. I have been interested in cooking with chestnuts but like Nigella peeling chestnuts gives me a nervous breakdown (once was enough for me to never do it again). If only cooked chestnuts were easier to buy. I have finally found a few places that 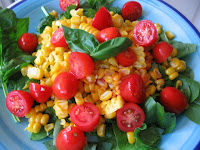 sell them, so I was keen to find a chestnut recipe that made it worthwhile paying $12 for a tin (I have found them cheaper since then I am glad to say). Chestnuts seem as British as Nigella so it seemed a fitting recipe.

The tinned chestnuts were odd looking but they added a depth of taste and a sweetness to the soup. Nigella suggested serving the soup with cold leftovers. I served it with a salad (fresh corn, cherry tomatoes, baby spinach, basil and raspberry vinegar) because I felt it was too rich to eat alone. E would have been quite content to eat it with toast. The soup took very little energy and I simmered it about half the time that she suggested in her recipe. The comforting puree was as velvety as promised. I like to think it was the colour of a teddy bear but E says it was the colour of mud. But it tasted good enough to see why Nigella hankered after the recipe after tasting it in a restaurant.

Roughly chop vegetables and stir over medium heat for 6-8 minutes in a large saucepan. You will know when they are done because they will have softened and be giving out a wonderful aroma. Add lentils and stir. Stir in the stock (or water and stock powder). Bring to boil and simmer about 15-20 minutes. Add chestnuts and simmer a further 15-20 minutes. Blend until smooth. Add water if you want it thinner. If desired, serve with a dollop of cream and some finely chopped parsley.

On the Stereo:
Here til here is there: an introduction to: the Incredible String Band
Posted by Johanna GGG at 23:19