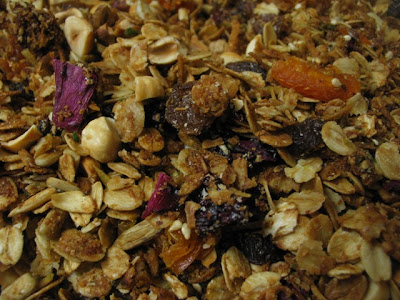 When I lived in a student household many years ago, we went through a phase of making our own muesli. We started following the recipe religiously and then began to throw in whatever we pleased. What made it hard was that we started to use a sweetner (malt extract?) that was very hard when cool and then got runny when warmed. It was not very sweet and probably came from the university food co-op. But it was so hard to work with that it took the joy out of cooking.

I have eaten muesli many times since then – when trying to eat well and lose weight, when not well and unable to eat much else for breakfast, and when trying to find a replacement for our beloved Alpen which is not available in Australia (unless you buy it at ridiculously inflated export 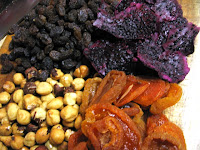 prices from a British shop).

I have been seeing muesli on blogs lately and decided to dig out the recipe we made as students. We must have eaten quite a bit of it because I had upsized all the quantities in pen beside the ingredients list. Then I remembered why we loved it. When I moved into that household they didn’t have a microwave and I did. So it was a bit of novelty to be microwaving anything. Now I like the idea of muesli you can make without having the oven on, especially in summer.

But I also remembered why we started experimenting. It is a good recipe but like most muesli recipes, it can accommodate any whim or abundance. Of course I checked out some bloggers’ recipes for some inspiration. Wendy used flaxseeds and lots of sweet spices, Monika used flaked coconut and agave nectar (and she told me no when I wondered if I could used olive oil), Ricki used sunflower seeds and tahini. Tahini? To bind it and help form clusters. Maybe this replaces the oil? Sounds interesting but I gave the tahini a miss as I am not interested in clusters. In fact 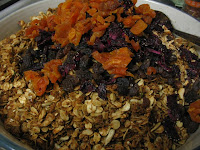 my recipe instructs me to break up clusters, which I am happy to do (although I feel a bit like a stern school teacher breaking up the fun!)

So the next question was: why did all my fellow bloggers call it granola. Were the clusters typical of granola rather than muesli? Over to see if Wikipedia can tell me if granola is the same this as muesli. According to Wiki, muesli is untoasted (‘dry’) or soaked (‘fresh’). Now, as someone who doesn’t like porridge, the idea of soaking oats is anathema to me, no matter how trendy it might be. Whereas, they say, granola is baked til crunchy. But I have always called that toasted muesli. Maybe it is because the name is no longer trademarked except in Australia.

As usual, Wiki answers one question and then I find all other interesting facts. Granola was revived in the 1960s and associated with the hippie movement. It even made an appearance at the Woodstock Music Festival. It is even slang to refer to hippies. Is this why Neil Diamond called his song Crunchy Granola Suite! Apparently conservatives in the USA occasionally called the left-leaning, granola to indicate they are mostly ‘fruit, nuts and flakes’.

I will still call mine muesli as I always have. I like it with stewed fruit, fruit juice or yoghurt, but never milk. This muesli is so good I am finding myself just snacking on a small dry bowl of it. It is crispy, crunchy, not too sweet and has explosions of tart fruit. One of my delights is using 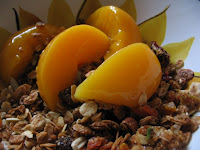 dragonfruit which is purple and seedy. You’ll find out where I got it soon. I also managed to use up some green dyed coconut that has sat in my pantry too long. Who would have believed I could get purple and green into muesli! Any grains, nuts, seeds and dried fruit can be used, so long as the quantities are roughly adhered to.

I am sending this to Suganya from Tasty Palettes who is hosting this month’s Weekend Breakfast Blogging. The theme is healthy eats and there will be an interesting round-up if her idly and sambar is any indication – check out the beautiful photos of the idly plates.

Put agave, oil, cinnamon, vanilla and salt in a small microwave proof bowl. Place in the microwave for about 2 minutes on High or until starting to bubble. Meantime combine oats, wheatgerm, coconut, and seeds in a shallow microwave dish (I thought we always used a mixing bowl). I didn’t include the nuts because they were already toasted but if not toasted they should be added at this point. When liquid is heated pour into oat mixture and mix.

Place oat mixture in microwave on High for 4 minutes. Stir well. Now microwave for 1 minute at a time and stir after each minute for about 4-10 minutes (I did 5 minutes) until golden brown. Stir in nuts and fruit. Cool. Break up if necessary. Stir in an airtight container when cold.

On the Stereo:
A warm and yeasty corner: Appendix out
Posted by Johanna GGG at 22:14