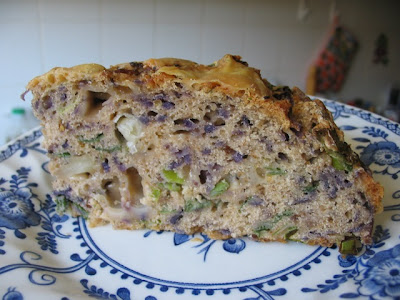 It is the year of the potato and to celebrate Eating Leeds is holding an event where bloggers cook a potato dish and are encouraged to try a different variety of potato to their usual ones. So I turned to Yann Lovelock and Colin Spencer to find out more about potatoes. 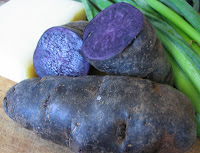 It has a fascinating history, originating in Peru where it broke up the soil to make the growing of maize possible. The Spanish explorers then ‘discovered’ potatoes and brought them back to Europe where for years they were shunned as poisonous, inedible and even immoral. In Scotland, Presbyterian ministers opposed eating potatoes because they were not mentioned in the bible. Walter Raleigh is credited with introducing them to Ireland. I am particularly inspired by the story of French military pharmacist, Parmentier who, in his campaign to popularise potatoes, served a dinner in which all courses were based around potatoes.

In Australian history taught in schools, the potato is probably most prominent in the story of the 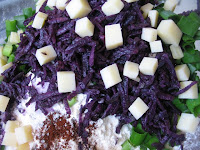 Irish potato famine of the 1840s because it sent migrants heading to our shores. But we are not taught that it saved so many from famine and war. Maybe we didn’t need to be told it was a vegetable of influence and benevolence. While appreciating Shila Hibben’s claim that ‘the potato, like man, was not meant to dwell alone’, none of us could imagine life without it.

The potato features heavily in the Australian diet. What small country town would be without its fish and chip shop (not the one where I grew up). My childhood was full of roast potatoes, mashed potatoes, boiled new

potatoes, pomme noisettes, shepherd’s pie, baked potatoes, packets of chips (crisps), hot chips, potato cakes, rosti, and the occasional treat of a chip butty and I am sure there are many more I can’t remember. I think my mum even made boston bun with mashed potato in it. I remember when I started cooking, I made a chocolate mashed potato cake which horrified my brothers and sisters but delighted me.

My recipe books are full of fantastic potato recipes – you will find them on my blog in soups, salads, stews, burgers, roast dinners, festive food, soda bread, cookies, and there are many more to come. Last week I made a delicious potato recipe which I found on Ann and Jack’s blog, Redacted Recipes. I knew the Cheese, Onion and Potato Bread must be good because Jack came back to the recipe after 12 years without disappointment – he described it as ‘small loaf with a rugged exterior and a soft, savoury interior, and it should taste wonderful’. He was right!

I love vegetables in baking and unlike some cookbook authors, I don’t feel it needs to be a 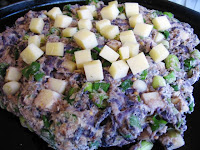 sneaky way of hiding vegetables and denying their existence. Rather, vegetables should be celebrated for making cakes and breads lighter, softer, moister and more full of taste.

When Eating Leeds suggested using a different potato, the obvious one for me to try was the delightful purple congo, which Colin Spencer describes as ‘dark violet and distinctly reminiscent of Elizabeth Taylor’s eyes’. I first noticed it last year at the Queen Vic Market. Then I saw Haalo making her wonderful purple gnocchi (and she kindly alerted me to the stall at Prahran Market that sells them). Happily, I found them close to work in the lovely little Lygon St fruit and veg shop in Carlton. (I could even weigh them on my new electronic scales I got for my birthday!)

I admit my excitement was all about colour rather than about different textures. I had visions of a purple loaf of bread. It wasn’t uniformly purple, but it pleased me immensely that the bread 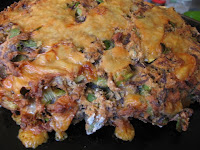 was flecked purple and green. What is really interesting about using purple potatoes is that you see them in the bread rather than having white on white.

This bread was one of the nicest quick breads I have ever made (apologies to Jack for a few changes). The potatoes were part of this – they added moisture and taste. But kudos must also go to the sweet softness of the spring onions, the smoked paprika, and the gruyere cheese. It was soft with a deep smoky cheesy taste. I mentioned to E that it almost tasted like bacon and he agreed that if I had told him it had bacon he would have believed it. I feel I finally have used my smoked paprika in a dish where it shines

and blends perfectly with the other flavours.

I probably don’t even need to say it, but this recipe is a winner! It was delicious with roast veggies and Muhammara, and took much self-discipline to leave any for breakfast the next morning. But it was delicious at breakfast time with or without jam, eaten over the weekend newspaper (which was promptly delivered unlike last week).

Place flour, salt and smoked paprika into medium mixing bowl. Add grated potato, 2/3 of the cheese, onions and thyme. Mix thoroughly. Lightly beat the egg with 2 tbsp milk and the mustard, add it to the bowl and mix everything together thoroughly until you have a sticky shaggy dough. You may need to add a little extra milk if it is quite dry.

Transfer the dough onto a greased baking tray – use floured hands or just scrape it out with a spoon. Form into a rough round. Push the remaining cubes of cheese into the surface, evenly spaced, dust lightly with flour then bake for 40 - 45 minutes. Cool on a wire rack. NB my cheese had melted the bread onto the tray and I had to use an eggflip (spatula) to loosen it from the tray.