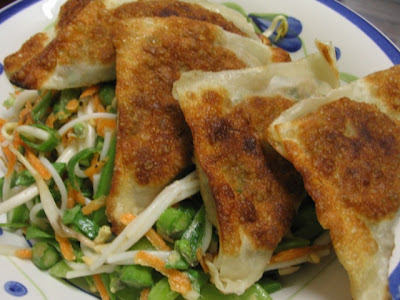 Last year Lucy of Nourish Me made gyoza which she described as ‘soft and pillowy on top; crunchy and golden on the bottom. And scented with that lime? Pretty sexy stuff.’ This was a recipe crying out to be made. This was a recipe that was hard to resist with wanton wrappers in the house. This recipe was delicious.

I love wantons. But I don’t usually have them when eating out because they are mostly filled with meat. So I am delighted to find how easy it is make them at home. First a superb soup and now gorgeous gzoyas. A far cry from my previous experience of making steamed dumplings with 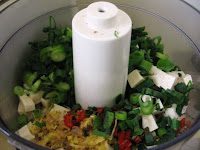 wrappers that were sticky and ripped easily.

Lucy had a neat trick of frying her gzoyas on one side and then steaming them. My gzoyas surprised me with the speed in which they fried and I only managed to flip them and fry them on the other side. Which tasted fine, albeit apparently not traditional. They were not completed fried and retained a texture which was crispy and soft.

The filling was soft with tofu and mushrooms, and fragrant with kaffir lime leaves and ginger. I gave it a good burl in the food processor, having learnt from Cindy that it was wise not to cut corners with this recipe.

Both Cindy and Lucy served these little lovelies with dipping sauce. I didn’t get organized enough to make a dipping sauce but did manage a Thai-style salad. (I think I was inspired by my Vina Bar noodle dish last week.) Now some of you might think dipping sauce is easier than a salad. But I had to have some veggies. I would like to try the dipping sauce some time and these are good 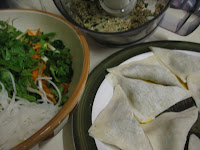 enough to make again (and again and again). I think they would make a lovely starter as they were quite light.

Curious about gyoza, I did a quick bit of research on the web. Also known as Japanese potstickers, they are popular in Japan and came from China in about the 17th Century or the 1940s depending on which website you read! There are gyoza moulds to easily give them the traditional shape (unlike mine), gyoza museums and gyoza restaurants. The most common filling seems to be pork. But I have now discovered other vegetarian recipes (at about.com and myrecipes) to try out and realised they should be moon-shaped and fastened with pleats. So maybe next time I will get the shape right and have a Japanese salad to accompany them. I’m learning.

I have checked out a few other bloggers who have made gyoza. Another Outspoken Female at Confessions of a Food Nazi has made cauliflower gyoza. Susan at Fat Free Vegan has made them 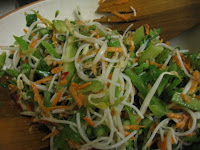 with a sweet fruit filling. I also found a recipe from ABC Darwin for roasted pumpkin and blue cheese gyoza – so I am pleased to see my memory of eating these at Mindl Beach Markets in Darwin is not just a flight of fantasy. And Ellie of Kitchen Wench gives helpful visual instructions on how to prepare dumplings.

I am sending this recipe to Ruth at Once Upon a Feast for Presto Pasta Nights. I particularly wanted to send something this week because for the past year Ruth has been putting up a round up of pasta posts sent to her from across the blogosphere every week. Congratulations on PPN’s first birthday!

To assemble:
- 12 wonton or gow gee wrappers (preferably round but I used 20 square ones)
- 1-2 tablespoons light olive oil
- ½ cup of water

Roughly chop the mushrooms (Lucy said to de-stalk but I didn’t). Place filling ingredients in a food processor and blend to a smooth paste.

Place wanton wrapper on flat surface (or in your hand) and place a generous teaspoon of the stuffing in the centre and spread a little but leave at least 1cm on the edges. Have a small glass or bowl of water beside you as you work. Dip your finger in the water and run it over the edges of the wrapper. Fold wrapper in half and pinch the edges together so there are no airbubbles in the dumpling. Flatten dumpling a little (I found this helpful for frying them). Repeat with remaining wrappers until all the filling is done. If you have leftovers they can be frozen at this stage.

Heat the oil in a heavy-based frying pan. When hot, add your gyozas in one layer. Fry over a medium heat for 2-3 minutes, or until golden underneath. They fry quickly so don’t get distracted. I flipped them and fried the other side for another 2-3 minutes but traditionally they are steamed after frying one side.

If you are a traditionalist and more used to fying than me then you should add water to the frypan when gyoza are fried gold on one side. Be very careful and stand back because it will bubble and spit. Cover pan, reduce heat and steam about 3 minutes. If there’s any water left at the end, take off the lid and let it evaporate. They will be soft and translucent when ready.

To make the dipping sauce, mix everything together in a small serving bowl.

*The ingredients in this salad can be altered easily to suit what you have available and what you love. Other optional salad ingredients that I didn’t use include: crisp lettuce, cabbage, cucumber, tomatoes, hard boiled eggs, tofu, mung bean sprouts, and potato chips!
*I tried using more noodles and it wasn't as good!

To make dressing, place all ingredients in a small bowl and whisk vigourously. Cook vermicelli noodles. (I put mine in a bowl of boiling water gave them 1-2 minutes in the microwave and then let them sit about 5 minutes til soft and drained them.) Place all salad ingredients in a large shallow bowl. Mollie suggests placing them artistically and drizzling the dressing on top. I just tossed the salad with the dressing. Garnish with herbs and lime wedges if desired.

On the stereo
Songs for the young at heart: Various Artists
Posted by Johanna GGG at 11:40