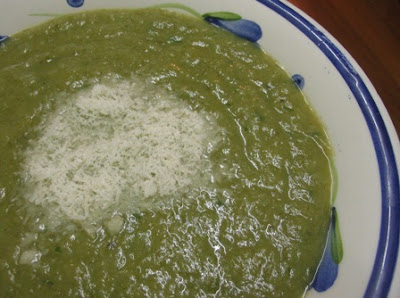 Last week I made a velvety soup from Nigella. This week is Nigel’s turn. I found a leek and potato soup in The Kitchen Diaries that he describes as 'a velvety soup for a clear cold day'. It is not winter but it is cool weather for summer. The soup attracted me because it is a way of using up parmesan rinds. I have been trying to use more fresh parmesan lately – it does make a difference – and have managed to accumulate 2 rinds of parmesan. Now I had read about using it in soup but once I have the rinds I couldn’t find these recipes until Nigel’s presented itself.

I also have had an attempt at making my own vegetable stock. I had such success with my ginger broth last week that I was willing have a go at cooking and discarding vegetables. I mean, imagine how many vegetables are discarded to make up my tin of stock powder – they do use 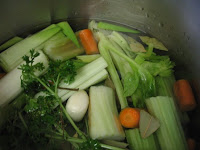 vegetables for that, don’t they?

On Sunday night I felt like a domestic goddess making casserole, muesli and stock! The stock was much less painless that some of my other encounters with stock. I once threw out a pot of stock my mum had made in the mistaken belief that it was dirty water soaking in the pot. She wasn’t happy. I was even less happy the time many years ago when I tried to make chicken stock and had a carcass with the neck flopping about to remind me I was handling a corpse. I was almost sick. Thankfully, I became vegetarian soon after and so never was tempted to repeat the experience. But I will be happy to make vegetable stock again, particularly if I need to use up vegetables like I did this weekend.

The soup was not quite as velvety as Nigella’s but it was very good. The leek and potato soups that I have had in the past have been very pale coloured and heavy with milk and cream. The recipe appealed because it didn’t have any added dairy apart from the parmesan rinds. It was more substantial and the colour of split pea soup, but tasty. E liked it so much he sang about it 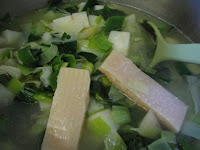 accompanied by his ukulele. He told me it was quite different to his mother’s soup which was watery with chunks of potatoes and leeks in it. I’ve never been a big fan of watery leek and potato soup. I liked that my soup was smooth without being too heavy.

The parmesan rinds amazed me how they went all soft and gooey. Nigel says to just scrape off the gooey cheese which sounds domestic goddess til you are faced with boiling hot cheese rinds. But once they cooled a little I found I could nibble more cheese off. I reckon this is the closest I have come to gnawing meat off a bone since I went vegetarian. So I was most pleased to have that experience without having some animal’s leg in my mouth (perish the thought)!

In a strange coincidence, the episode of the Mighty Boosh that we watched after tea had a very silly song with lyrics claiming ‘cheese is a kind of meat’. Well it is only to be expected from a show where you play on a pipe to summon the locksmith, get rescued from the jungle by mod wolves on scooters and the zoo is saved by grated cheese. (Hope I haven’t spoilt it for anyone.) Just shows what a difference cheese can make to anyone’s life.

I haven’t raved much about potatoes in the post but this is a great potato recipe. So I am sending this soup to DK at Culinary Bazaar where Yet Another Potato Fe(a)st is being held to celebrate the International Year of the Potato.

Add stock or water, seasoning and parmesan rinds. Simmer 30-40 minutes. Remove parmesan rinds, scraping the gooey bits of cheese back into the soup (I had to hold it on a chopping board with a fork to scrape at the hot cheese rinds with a spoon. Maybe a knife would have been better for scraping.)

Add parsley and blend til smooth. Check seasoning – Nigel says you might need to be generous with seasoning but I wasn’t overly. Serve hot with a spoonful of cheese in each bowl and a good grinding of pepper.

Place everything into a big stockpot. Bring to the boil and simmer 1 hour. Strain and discard vegetables. Keep stock in fridge for a week or freezer for a couple of months.

On the stereo:
Gather in the mushrooms: the British acid folk underground 1968-1974 – Various Artists
Posted by Johanna GGG at 22:56