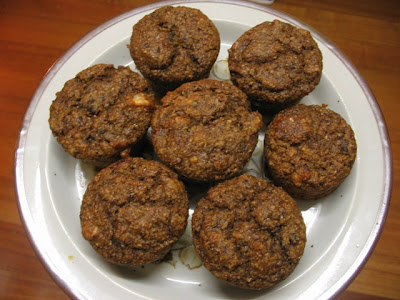 ‘What sort of muffins have you made?’ asked E as he did the dishes following my baking.

‘Ummm… I put them all in the freezer except one and you are welcome to that one,’ I replied.

He congratulated me on some fine dissembling about my muffins and told me I would make a great interviewee on the John Faine morning radio show – I think he was alluding to politicians who refuse to answer any questions.

But there was a reason I didn’t like to answer. I made Wendy’s moist bran muffins but I had wheat germ I wanted to use up and used it instead of wheat bran. Does that mean I have to say I made moist germ muffins? It just doesn’t have the same ring to it! I would prefer to call them prune muffins but the prunes are really there because Wendy substituted prune puree for butter – inspired by Nigella Lawson! They don’t really taste like prunes but the prunes do seem to make them pleasingly moist.

I wondered what difference it would make to use wheat germ rather than wheat bran. I checked with Sarah Brown and Rose Elliot who both wrote that the wheat germ has most of the nutrients because it is the place where the wheat germinates, but the bran comes from the husk and is full of fibre. My muffins might not be so fibre-packed but apparently they are full of nutrients (unless these die in the baking process which is quite possible).

I had a few other deviations from Wendy’s recipe. The only tin of prunes I could find in the supermarket was sweetened (why why why?). I discovered this as I looked at the amount of sugar required by the recipe. Wendy must have used unsweetened prunes. I halved the sugar and it was still very sweet. I added molasses and forgot the salt. I also used mostly wholemeal flour which worked fine. I liked the caramelly taste that molasses imparts so will do that again. I might also just try pureeing dried prunes rather than the tinned ones next time.

But for now the muffins tasted lovely and sit in the freezer awaiting morning teas and afternoon teas when I need a treat of wholesome goodness. And the name? I am sticking to Wendy’s name because I can’t bear to call them Germ Muffins.

Mix wheat bran or wheat germ into milk and yoghurt in a small bowl so it soaks up the liquid. Set aside while preparing other ingredients.

Spoon mixture into a greased muffin tin (or ungreased silicone muffin tray). Bake in a 190 C pre-heated oven for 20-25 minutes til golden brown. Cool on a wire rack and store in airtight container or freeze.

On the Stereo:
World Library of Folk and Primitive Music, vol III, Scotland – compiled and edited by Alan Lomax
Posted by Johanna GGG at 22:49