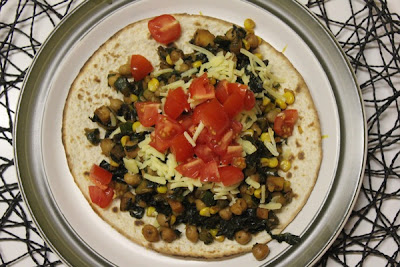 As I left for work today there was a clap of thunder, a flash of lightning and the rain poured down.  Just right for my mood.  It has been a sad week.  In our house we have been missing Dolly.  In the news has been the terrible news of Jill Meagher, an Irish woman living in Melbourne who disappeared when walking home from a nightclub.  A week later she was found murdered.  Such a random senseless sad death. 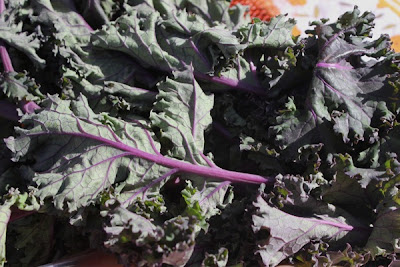 I would take more delight in finding this glorious purple kale, if it were not for it reminding me of the farmers market where Dolly disappeared without a trace.  It is unlike any kale I have seen before.  The kale to which I am accustomed goes by the various names of Tuscan kale, black kale and cavolo nero.  It has stems that are soft enough to eat.  This purple kale looks pretty but the stalks are so tough they must be discarded. 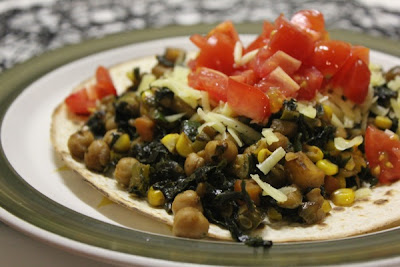 The recipe is adapted from the Chickpea, Swiss Chard and Sweet Potato from Eats Well with Others.  I have been admiring Joanne's picture which I pinned to Pinterest.   My top photo is an homage to a glorious image.  I wish I had had sweet potatoes but used other vegies instead.  I had thought I had some feta to use but it was too wilted.  The cheddar cheese didn't add much.  Some chunks of avocado would have been a better addition.  Despite this, I loved this dish.  It was a satisfying dinner and made wonderful leftovers for work lunches. 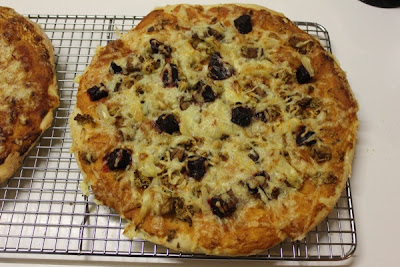 Lastly, I have signed up to Vegan Mofo again because I enjoyed it last year.  I swithered about doing it because I was worried I wouldn't have enough time to commit to it.  Then I decided that if I tried to do at least 20 post in the months (rather than every day like I did last year) it was achievable.  It does mean spending time looking at new blogs, which will put the squeeze on visiting my regular blogs.  But you will get to see lots of delicious vegan food.

I have already started experimenting.  Above is a vegan mofo teaser.  Yes it is covered in dairy cheese.  I have a vegan version that I will share soon.  Can you guess what sort of pizza it is?

Chickpea, Kale and Corn Burritos
Adapted from Eats Well with Others
Serves 4

When kale mixture is almost ready, heat a medium frypan over medium high heat.  Spray with olive oil.  Place a tortilla on the frypan for 30 seconds (or until brown heat spots appear on the underside) and then turn and heat on other side for about 30 seconds.

Place warm tortilla on a dinner plate.  Spoon over the kale mixture.  Scatter with grated cheese and chopped tomatoes.  Eat either with the tortilla wrapped around the filling (the messy way) or with a knife and fork (the posh way).

On the Stereo:
Super Trouper: ABBA
Posted by Johanna GGG at 22:47