Pumpkin, PC Stories and a Roast 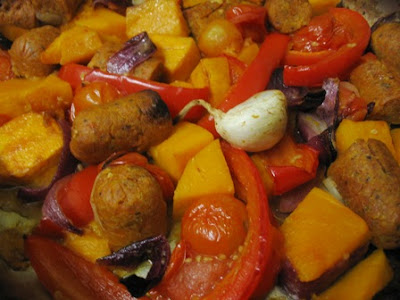 If you have read my recent pumpkin post, you will know that I have been giving this vegetable a considerable amount of thought lately. Tonight I continue my musings but in a different vein.

On the weekend I was listening to Helen Razer on ABC 774. She was talking about a newspaper report that the South Australian state government has instructed teachers to warn children not to imitate the risky behaviour of characters in fairy tales such as Little Red Riding Hood, Goldilocks and Hansel and Gretel. Seems like political correctness gone mad!

But it got me wondering about what warnings would be on pumpkins if we really did believe fairy tales and nursery rhymes. Warning: May turn into a coach if fairy godmothers in the vicinity. It worked for Cinderella, but imagine starting to cook your pumpkin for dinner and some pesky

fairy godmother waves her wand and your pumpkin is off to the ball. Most inconvenient. Although maybe there would be some young girls who would buy a pumpkin in the belief that it was necessary to meet her Prince Charming.

Or should young women be warned against marrying men called Peter who liked pumpkins? This got me thinking about Peter Peter Pumpkin Eater. I have always thought the lines ‘so he put her in a pumpkin shell and there he kept her very well’ meant he imprisoned her in a pumpkin. But then I was thinking maybe it was not such a bad life because it does say he kept her ‘very well’.

Maybe it means that due to the real estate crisis, he just couldn’t afford a home and finally found a large old pumpkin shell where they lived happily ever after, hacking off a piece of pumpkin for dinner every now and again. E told me it was a silly idea but I said if James could live inside a giant peach why not a pumpkin. You only need to read about the pumpkin growing competitions to see it is quite believable.

Oh and one more little esoteric piece of information. As a lover of pumpkin, I almost was a Peter Peter Pumpkin Eater because I would have been called Peter if I had been born a boy. So I have good reason to defend him.

But onto my recipe which is a humble jumble of roast vegies and sausages. I found the idea on Hippolyra’s Fuss Free Flavours. It was a nice variation on a Jill Dupleix recipe of roast onions, tomatoes and sausages which I have enjoyed a few times. Of course I use vegetarian sausages and liked the idea of adding the moistness of pumpkin because the vego sausages are drier than the meaty kind. It worked a treat and was as delicious as it was easy.

This is a great recipe for a night when you want to just sit back and relax while dinner cooks. Hippolyra made it while on holidays and says it is also very handy when cooking in a strange kitchen because it just requires one tray. First night we had it with roast potatoes but the leftovers were thrown into a pasta sauce. And of course, like Hippolyra, you could substitute meat sausages for the veggie ones, if that’s your thing!

Place pumpkin, sausages and onion (and rosemary if using) in roasting dish and toss with a little olive oil and salt. Bake for about 20 minutes at 200 C. Add remaining ingredients and toss to mix. Bake an additional 40-60 minutes until the pumpkin starts to feel soft and mushy when you stir it. The sausages should crisp up a little. (I was moving trays between shelves in the oven so my timing is not terribly scientific.)