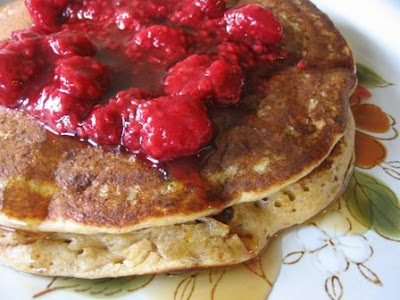 When Susan at The Well Seasoned Cook announced an event called Pancakes on Parade, I immediately knew that my contribution would be pumpkin buckwheat pancakes. Pumpkin because I had craved Lisa’s gorgeous Spiced Pumpkin Waffles but I don’t have a waffle iron and I love anything with pumpkin. Buckwheat is something I don’t usually use but I had bought some intending to make Hippolyra;s healthy sticky toffee pudding (yet to come to our kitchen).

The wet ingredients mixture was nice and orange but the pancakes didn’t take on the bright colour of pumpkin scones . They flipped nicely on my new scanpan frypan and did retain some pleasing orange marbling in the finished result. My main reservation was the spices. If I make 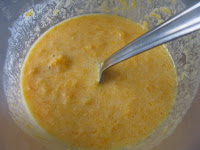 them again I will either add choc chips or to do away with the spices. But with a rosy raspberry sauce and lashings of maple syrup, I wasn’t complaining.

It is always a treat to have pancakes for brunch. Which is odd because when I was young the very idea of pancakes for brunch was quite foreign to us kids who started the day with cereal, toast and vegemite. We mostly had pancakes for sweets (dessert). My mum would sometimes bring the electric frypan to the dining table and we would take our turns getting hot pancakes fresh out of the pan. Our pancakes were quite small and served with either lemon and sugar or butter and sugar. Occasionally mum cut up banana into the pancake batter or gave us jam and butter.

On the weekend I was talking about cooking with mum and she reminded me that she used to cut up chunks of leftover meat and mix them into pancake batter which she fried and served with tomato sauce for dinner. I quite liked these. When I became vegetarian, I found all manner of recipes for savoury pancakes meals and was surprised at how versatile they can be. I really should try more of these recipes rather than just drooling over them.

I find that I mostly make pancakes for brunch every now and again because one of my favourite childhood memories is of Pancake Parlour fluffy buttermilk pancakes with whipped butter and maple syrup. As a child we never used buttermilk or maple syrup at home (nor buckwheat for 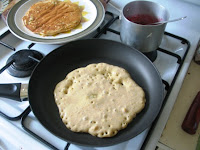 that matter) so it seemed quite exotic. But the idea of buttermilk in pancakes still seems so right. I am not sure why, but now maple syrup on pancakes and lazy luxurious mornings are inextricably linked in my mind.

In fact the only time I can remember eating pancakes for breakfast while still living with my parents was the morning after my last day of high school. I can’t remember what we did but I know we stayed up all night and decided to have pancakes for breakfast at the Pancake Parlour as soon as it opened. Come to think of it I am not sure if I had them even on that occasion. All I can remember of that night is the delicious anticipation of waiting to eat those wonderful pancakes. Maybe it was closed that day. Or maybe the anticipation was much better than the pancakes.

Even today I consider pancakes an extravagance because I love lots of butter and maple syrup on them. I don’t feel I can or should indulge in such luxuries regularly but every now and again a little pampering is good for the soul.

Heat a little butter in a non-stick frypan over medium low heat. Use a brush or paper towel to make sure butter evenly distributed. Drop about 3 generous dessertspoons of mixture into frypan and spread it out to about 15-20 cm diameter. Fry about 2 minutes or until bubble begin to appear and the mixture seems to just thicken (or start to cook). Flip and fry another 1-2 minutes on the other side.

On the stereo:
A Brief History of the Twentieth Century: Gang of Four
Posted by Johanna GGG at 20:30