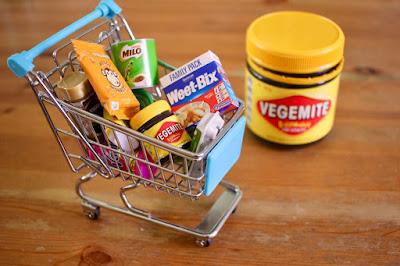 One moment we were in Coles supermarket turning our noses up at Little Shop trolleys and the next a cashier was handing us a bag of surprise as a reward for spending over $30.  My 9 year old daughter opened the bag to find her first Little Shop collectable.  She squealed in delight at the miniature jar of coffee.  Since then it has become a trading craze in the school yard,  a marketing success, and an environmental nightmare. 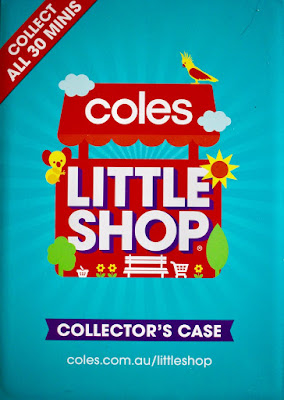 I wonder if I had realised what it would become, would I have refused that first collectable.  Probably not.  Sylvia has been obsessed with little and tiny things all her life.  And the collectables appeal to the child in me who still loves miniatures and collecting.  As someone used to the cheap miniature toys, I am impressed at the details on the packaging that are quite similar to the real thing.  (They are made by a Dutch company Unga who have already made toys for similar campaigns in other countries.)

I have been surprised how much trading has gone on each day in the school yard.  It reminds me of my days of swap cards and stamp collecting.  Sylvia would arrive home from school telling us who had what, the trades she had made and who had promised to swap with her tomorrow.  She was talking to whom she would not usually give the time of day.  I helped her with her collection by asking family and people at work to give us their collectables.

It is not just kids who have been collecting the Little Shoppers.  Apparently lots of adults have been going ga-ga for them too.  The media is full of stories of desperate adults at swap meets and collections selling for 4 figure sums on e-bay.  A friend who works at Coles said it has been unpleasant to be harrassed for collectables by people who say they never got them when they paid.  Now the staff have to initial the receipts to say collectables have been given out. 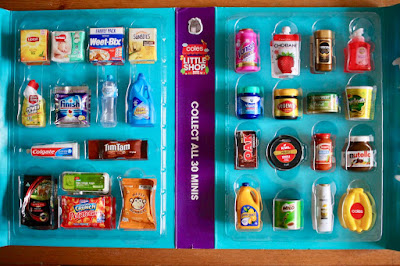 Some kids are not collecting Little Shop collectables.  I am very sympathetic with their parents.  There is much to dislike about the whole promotion.  Pester power is alive and well when your kid is encouraging you to buy lots of groceries at just one supermarket because you get one collectable for every $30 you spend.  (And, yes we have shopped at Coles more than usual lately.)

As an adult I find the cynical marketing behind them disturbingly fascinating. It concerns me that Coles supermarket promotes brands to my child in what could be considered an underhand way.  For example, Colgate already corners the toothpaste market and reinforces this by being the brand of toothpaste in the collection.  Equally concerning is that the promotion is for processed foods.  Though, having seen the bananas, I can appreciate that it is far easier to reproduce packages than fresh foods.  The question I am really interested in is: how did they choose the products and how much did the manufacturers pay to be part of this promotion?

It has been disturbing to see the in-store promotion of products featured in the Little Shop collectables.  When shopping last weekend, I pointed out to my daughter just how the brands from little shop were stacked at the ends of the aisles.  We also had fun writing our own wishlists of the products we would have liked to be featured.  (Some favourites were tomato sauce, baked beans and Fry's vegetarian schnitzels.) 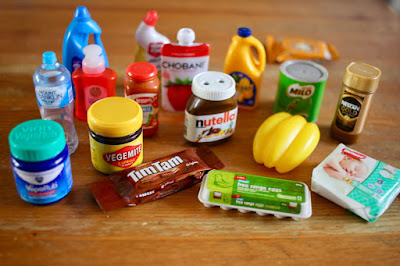 And if the Little Shoppers are the marketer's best friend, they are the environmentalist's nightmare.  Isn't it ironic that Coles bring our these giveaways made of plastic, packaged in plastic bags, just as they are starting to phase out single use plastic bags.  Throw in a plastic case and some plastic accessories and there is a lot of plastic.  A lot of concern has been voiced online about all the plastics and where they will end up.  Some collectables have already been found on beaches, in contradiction to Cole's claim that customers are enjoying and keeping collectables for future use. 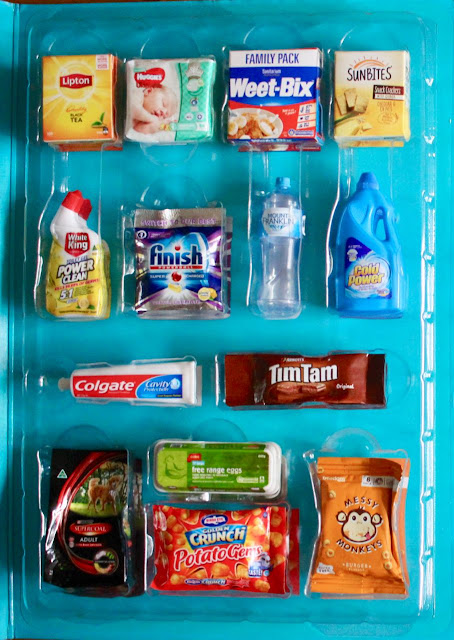 We have had lots of discussions about the merits and failings of the individual Little Shoppers.  Some of the conversations about the mini-shoppers have been about the following:
- the bananas look the least realistic and are most crassly branded with Coles logo,
- the Tim Tam packet is not quite the right shape - it is too flat,
- the Vegemite was one of the favourites,
- the Nutella was cute but the jury was out about the two holes through the jar - I didn't like it because it made it look less real but Sylvia thought it meant you could make a necklace out of it,
- the tuna was least liked in our vegetarian household,
- the hand soap is so cute and great in a dolls house
- they aren't all in proportion - eg compare the size of the yoghurt squeezy to the bottle of orange juice,
- the chocolate milk top isn't quite right 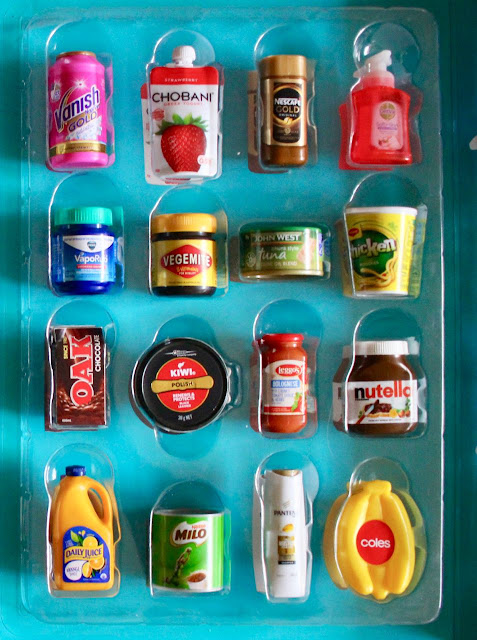 Sylvia completed her collection late last week.  (She says most kids at school have not got a complete set.)  I confess to being relieved not to feel pressured to get the rare collectables when I am at the checkout.  Though it has been a fun too to see what will turn up.  And I have really appreciated how helpful family and colleagues have been.

It will be interesting to see what will become of the collectables.  Kids have so much stuff these days that they don't place much value in toys and quickly move on to the next thing.  There was one positive story, though, about a disability service in Sunbury requesting donations of collectables for their educational programs.

If you are interested in reading more about the Little Shop collectables, here are some interesting articles: