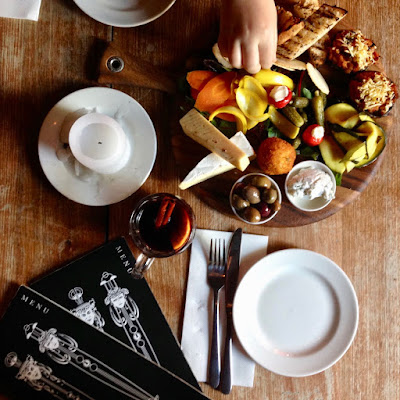 A few months back my bookclub saw Breath by Tim Winton at the Westgarth Cinema.  When we were asked for suggestions for dinner, I put forward the Wesley Anne up the road.  I had been curious about this pub in a converted old church on the high street.  It is brimming with heritage charm, albeit a gloomy lack of light.  There are quite a few vegetarian offerings.  The food is a cut above your average pub grub and leans towards Italian dishes.  I liked it so much I waited to visit again before writing about it. 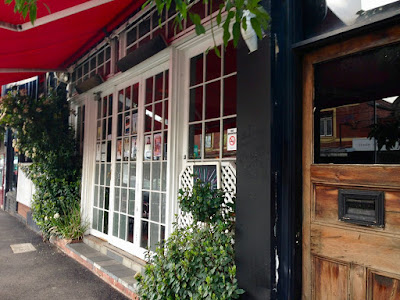 From the street the pub looks fairly unassuming.  In fact, it is one of those places I can never remember exactly where it is because it doesn't make a great impact when you are walking along the high street.  The above photo is taken during the day on our second visit, as is the below photo of the gloom inside.  It was even darker at night. 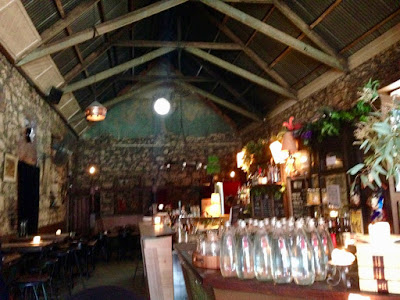 On the first visit, at night, it was so dark that we had to use our torches on our cameras to read the menu or specials board.  It was not a great place to find that I had lost my wallet.  I could hardly see as I rifled through my handbag.  (We dropped by the cinema later and it was exactly where I thought I had dropped it.  Phew!)  The group was surprised at how calm I was but they didn't know just how many times I have lost my purse and usually found it again. 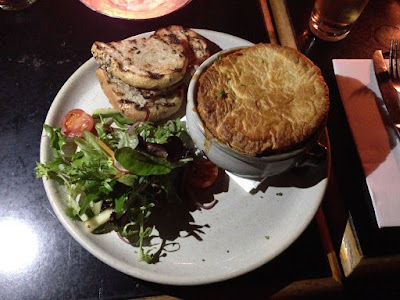 Here is my pie I ordered on the first visit, lit by a phone.  I had the seasonal vegetable stew pot pie with toasted sourdough and green salad.  It was very good but a bit disconcerting that in the dim candlelight I could not see what was in my pie.  It had potatoes, carrots and I think lentils.  I also dislike having pies and bakes served in small ramekins because they are awkward to eat with a knife and fork.- potato, carrot, and I think lentils. - served in a small bowl so awkwards with knife and fork. 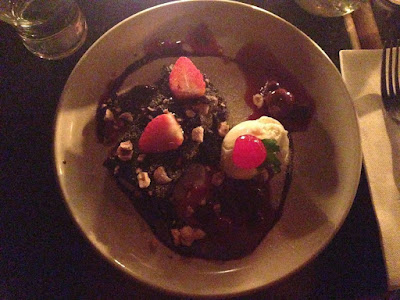 It was great to discuss both the book and the film of Breath.  Both had great surfing description/cinematography and some great 1970s nostalgia but the endings were just a bit weird.  We were happy to stay on chatting and have dessert.  I had the brownie sundae with hazelnuts, cherries and ice cream.  It was a rather soft brownie, almost like pudding, but I enjoyed it. 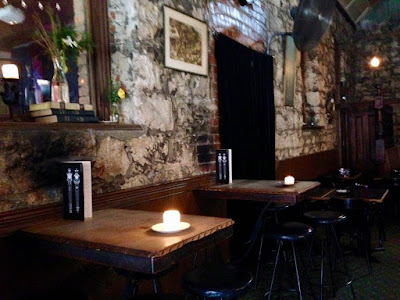 When I returned for the second visit at lunchtime I had hoped I might get some photos of the interior but it was still very gloomy in the booths where I had sat previously.  The name the Wesley Anne is a nod to the building's past life as a 19th Century Wesleyan Methodist church.  The stone walls have the austerity of such sterm church folk but there is more warmth in the pub  these days with candlelight, vases, and  friendly staff. 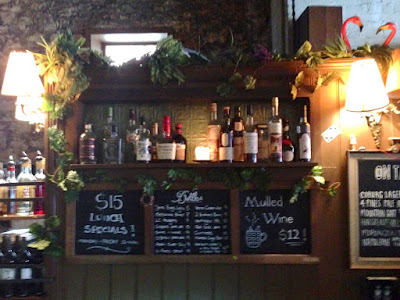 I really like the welcoming ye olde bar.  Lamps, plants, fun figurines and blackboards make it a bit more boho than your average modern Aussie pub.  And I am a sucker for the pressed metal decorations around the bar. 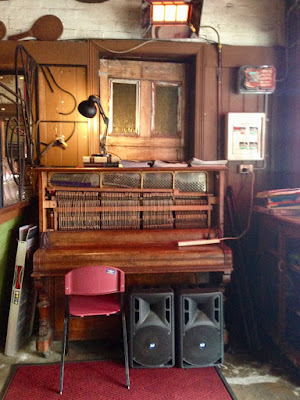 When you come in the door, however, the place has lots of light from the street.  Like you see at this old piano.  So rather than sit in the gloomy (and fairly quiet) back of the pub, we went into the room next to the bar with the stage for musicians and found a large booth in the window. 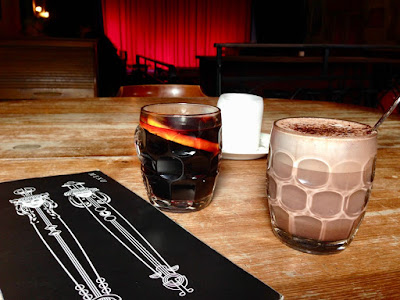 I ordered a mulled wine because I had really wanted some mulled wine on my first visit but had already had a glass at the Westgarth Cinema.  The mulled wine at the Wesley Anne is much nicer and went down very well.  It was had a nice sweetness and was full of heady spices without being too strong in the alcohol side.  Sylvia had a hot chocolate. 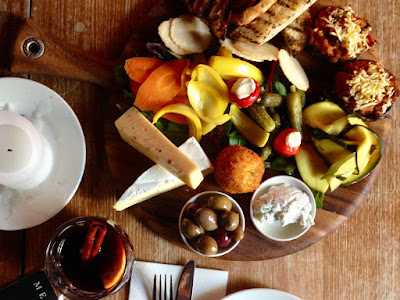 I ordered the vegetarian tasting plate because I thought Sylvia might find something to share with me.  It was a fairly extensive list of house made pickles,  stuffed mini pepper, local cheese, olive, dip, stuffed mushrooms, arancini, toasted sourdough and gluten free crackers ($26).  Vegan and gluten free versions are available.

The cheeses were brie and cheddar with cracked pepper and the dip was a tzatziki, so none of these appealed to Sylvia.  Nor did she like the all pickled veg.  Whereas I really loved the pickled carrots, found the pickled zucchini a rather large pile and I didn't fancy the pickled onion which is not my thing.  I just loved the pumpkin arancini and was smitten with the stuffed mushrooms with a tomato rice filling covered in crispy cheese and was more than happy to eat chargrilled sourdough with cheese and pickles.  I was sorry Sylvia didn't find much to eat beyond crackers but I really loved the tasting plate.  I'd return just to eat this platter again and perhaps share it with some more enthusiastic diners.