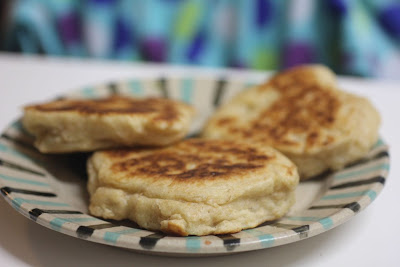 E has recently started using the term 'epic fail'.  I accused him of being down with the kids.  He protested that he had picked it up from The Age newspaper (which until recently was our broadsheet and still is on weekends)!  So now that is the term that went through my mind as I made Dan Lepard's brown butter picklets yesterday.  My dough wouldn't rise, I burnt the brown butter and pressed the air out of them.  It wasn't looking good.  Finally in the second and last batch of these griddle breads, they worked a treat.  Phew! 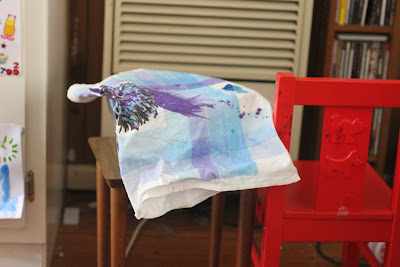 Now I know you are probably thinking I can't spell pikelets.  After all I only recently realised I had been mispelling edamame and had a major typo in a favourite recipe.  I even wore a pyjama top down the street by mistake recently (incidentally one of my nightmares has now come true)!  But these little griddle breads are actually called 'picklets'.

I came across the recipe while participating in Dom's Random Recipes Challenge.  It is a blog event that really pushes me out of my comfort zone because he asks us to let fate decide what to cook.  The fates aren't always kind.  This month's theme is Bread.  I used the random number generator with my bread cookbooks (disregarding books where it was just a few sweet breads) and was relieved when this one came up.  Not only was it a book I had never used but it was also a recipe that wasn't too onerous. The first part of the recipe is to mix ingredients and wait 2 hours for the yeasted batter to become bubbly.  I spent a lot of time searching my batter for bubbles.  None to be seen.  In fact I waited an hour, turned on the heater and put the bread in front of it (in the above photo under the blue teatowel - with red chair for Sylvia to sit and check on the batter).  Then it was around dinner time so I stirred it and waited another 2 hours.  No bubbles in sight. 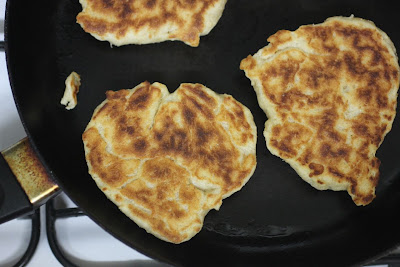 After dinner I browned the butter but took too long taking photos of the butter and it burned.   I was feeling a bit nervous about the picklets by then and started again with the butter.  The batter was quite thick.  I had expected it to be runny like pancakes.  I was so surprised at how blobby they were that I flattened them when I flipped them over.  I think it was the same mistake I made as a child when I sifted flour for my mum and then helpfully patted it down nice and firmly.  And they tasted undercooked.  I learnt from my mistake and let the next batch cook their own way.  They were far far better. 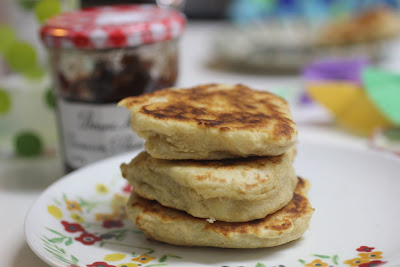 Meanwhile, Sylvia had got it into her head that she was having a midnight feast.  Like Katie Morag!  It was to be picklets with jam, porridgies and limeade.  So in the end I was happy that it took so long waiting for the picklets.  Rather than having them as a late afternoon snack, we ate them for dessert.  I was also pleased that midnight still means any time after dinner to Sylvia. 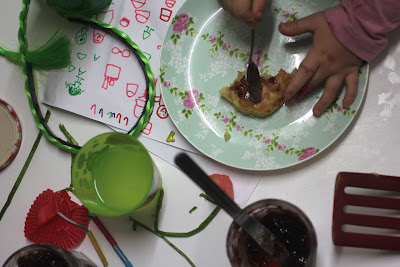 I was intrigued by Dan Lepard's claim that picklets are an early griddle bread that is "completely forgotten now, ..., which was a version of the crumpet."  I searched high and low online only to find that lots of people misspell picklet and there is a publishing platform called picklet.  Then I found some information at the reliable Old Foodie about the evolution of picklets into pikelet.  Many fellow Aussies (including Dan Lepard) remember their mums whipping up a batch of pikelets that resemble small pancakes..  The pikelet is part of our culinary heritage.  It is a shame that picklets have fallen from favour. 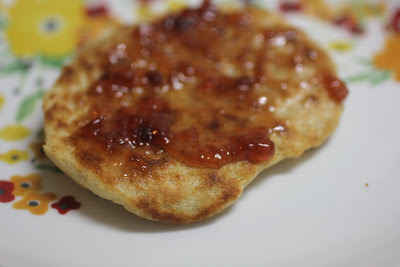 I am a little unsure that I got the recipe right, after my problems with the batter not bubbling.  Was my house too cold or did I get the yeast quantity wrong or was it critical that I overlooked the temperature of the liquids?  I found the recipe reproduced online at BBC4 used twice as much yeast as in The Handmade Loaf.  In the recipe below I have doubled the amount of yeast.  When I cooked the first batch they seemed undercooked in the middle.  The second batch seemed slightly doughy inside but less so and quite edible.  When I ate one of those later at room temperature the texture seemed to have become slightly more bready. 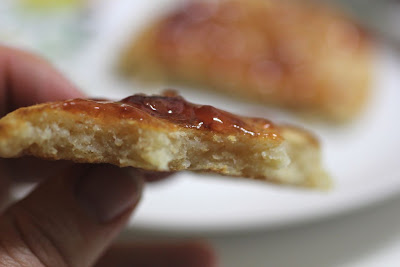 Problems aside, we really enjoyed these warm off the frypan with a little jam and then later in the evening with some peanut butter.  The last of the batch were eaten for breakfast.   Thanks Dom for pushing me a little to make a bread that took me right out of my comfort zone.  I have already been asked by Sylvia to make these again and indeed I intend to.

Mix flours, dried yeast and salt in a large mixing bowl.  Warm milk and water to 20 C (I didn't do this but used lukewarm water).  It will be like a sticky dough.  Cover and set aside in warm place for 2 hours until bubbles appear.  (My bubbles didn't appear even with extra time but the texture of the dough thickened and rose slightly.)

Melt butter in a small saucepan and continue to heat until it turns a nut brown colour.  Remove from heat and run cold water over the bottom of the saucepan to cool the butter to warm.  Mix into dough.  Dissolve bicarb soda in 1 tbsp water and mix into dough.  It makes quite a thick batter - too thick to pour but much too sticky to knead.

Heat frypan with a some oil until the oil is smoking and then discard oil (I put it out with my burnt butter but am not quite sure I would do this step in future).  Heat to medium high, melt about 1 tsp of butter (or oil) and swirl to cover pan.  Drop 3 to 4 dessertspoonfuls on the frypan to make 3 to 4 individual picklets.  Cook for a few minutes (I didn't time this because it was busy tea time) until the mixture changes texture on the bottom and is golden brown underneath.  Flip over and fry another few minutes until golden brown on the other side.

Eat hot or at room temperature with jam or butter.  Best eaten on day of cooking.

On the stereo:
Astor Piazzolla 10 CD Boxset
Posted by Johanna GGG at 23:35