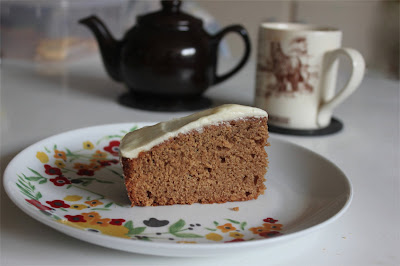 The other night I found myself in a sticky situation.  Literally.  It was a matter of a cake for a community event.  I've seen many an accomplished baker quiver at the very mention of caramel.  Yet I blithely put my faith in the Australian Women's Weekly and set out to bake a caramel cake.  Fortunately after throwing out two batches of caramel icing, I finally listened to intuition and made the sort of icing that would make my foremothers proud. 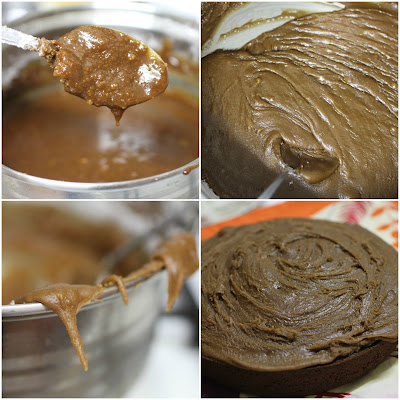 The cake was a variation on a basic butter cake.  But I couldn't work out the recipe for the caramel icing.  It said to stir brown sugar and butter until sugar melted and then to simmer without stirring for 3 minutes.  Then to stir in icing sugar.  The first time I think I overcooked the caramel and the icing was so grainy.  The second time I thought I had the caramel lovely and creamy but when I added the icing sugar it seized into a crystallised sugary mixture that set hard as soon as it cooled. 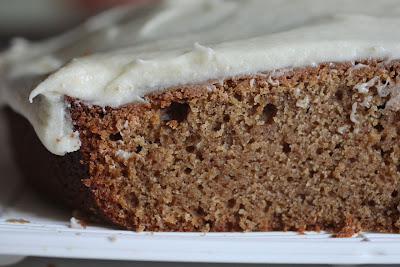 I actually thought the second caramel might work.  Yet once it was on the cake and set hard it was horrible.  Too sweet and sugary and flaked off at the merest touch.  I almost just left it at home.  But then I thought about how I would make the icing and decided to have a third go.  It was a moment when I heard the force calling me.  Only I think it was the voices of my mother and her mother and her mother and so on.  They were telling me to just do what we had always done and mix icing sugar with butter.  I added a bit of golden syrup for a caramel flavour.  Bingo! 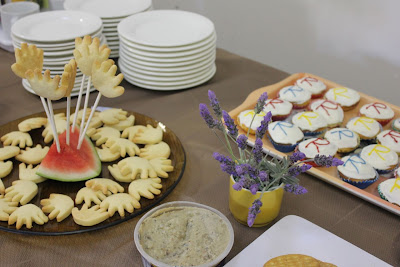 I also made some plain biscuits and made them into hand shapes to reflect the theme of the community event.  (Raise your hand!)  I used the sugar cookies recipe that we used to make cookie wands a few years back.  I put a few on sticks but didn't have the energy to do them all on sticks.  I followed my mum's advice and only added one third cup of sugar and found that they were not at all sweet.  Probably not a bad thing at an event where there was lots of sweet food. 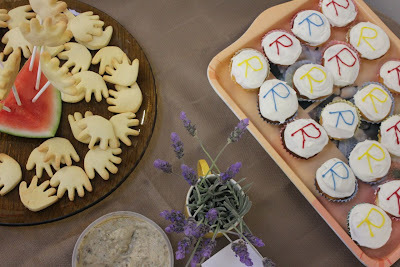 There were lots of great food at the event.  After all my stress about the cake, it was the biscuits that got all the attention.  It was probably the brilliant idea (I wish it was mine) to stand the biscuits on sticks in a wedge of watermelon.  E was happy I brought home some cake with soft buttery icing.  Sylvia seemed quite taken with the cake too.  The next day she was at her toy stove making caramel berry cake for Dolly's birthday. 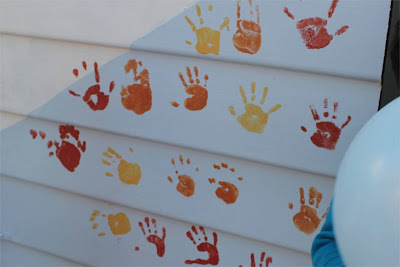 I am sending this to Archana at Tangy Minds for Bake Fest, an event founded by Vardhini of Cook's Joy.

Caramel icing:
2-3 tbsp of nuttalex (or other margarine or butter)
about 3 heaped dessertspoons of icing sugar
1 tsp golden syrup
trickle of milk

Cream the butter, sugar and vanilla essence,  Beat in the eggs, one at a time, and then the golden syrup.  Gently stir in flours, cinnamon and milk.  Bake in moderate oven at 180 C until golden brown and a skewer inserted in the middle comes out clean.  (It took me about 1 hour and 15 min but the AWW recipe suggested 50 minutes.)  Sit in the tin for 5 minutes and then turn on to a wire rack to cool.

When cool, make the icing by mixing all the ingredients together until you have a smooth spreadable mixture.  Spread icing over cake.

On the stereo:
Back to basics: Billy Bragg
Posted by Johanna GGG at 16:15