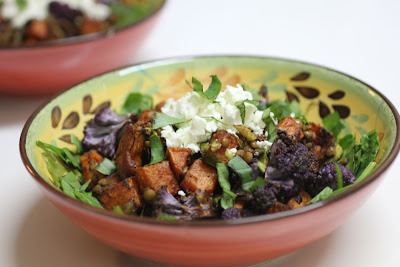 It was a weekend of colour and comfort, frustration and fixing, markets and modems.   I went to Fitzroy Market, found our modem had died*, ate a colourful vegetable salad, spent time at the park watching Sylvia climb trees, walked through piles of autumn leaves, experimented with a cauliflower pizza base and made homely golden syrup dumplings. 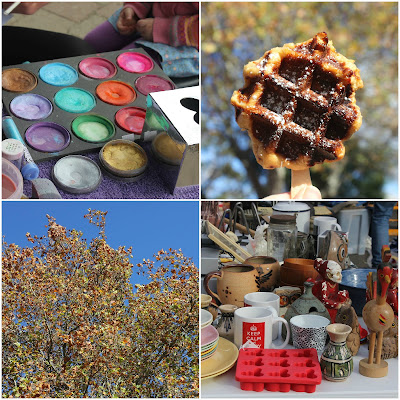 Good fun was had at the Fitzroy Market.  The bbq stall had vegan vegetable and lentil soup in cups.  I sampled and enjoyed.  It was tasty, albeit not terribly filling.  The icy poles have been replaced by waffles.  I had a peanut butter waffle which was delicious.E played with the ukelele players, Sylvia climbed trees and had a mermaid painted on her face, I was amused by a Gene Simmons doll but more attracted to the sourdough loaves. 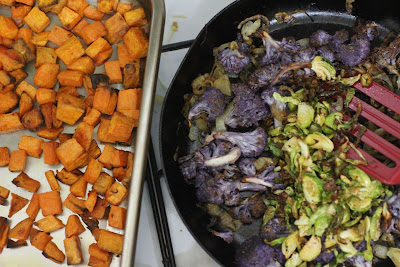 On the home front, I had purple cauliflower.  I don't find it often.  I wished I hadn't seen a purple cauliflower while a whole white one sat in the fridge at home.  But it was too beautiful to leave in the shop.

One of my favourite radio talk back shows often has a segment called "What are the chances...?"  Here are a few of my odd coincidences and occurrences lately: 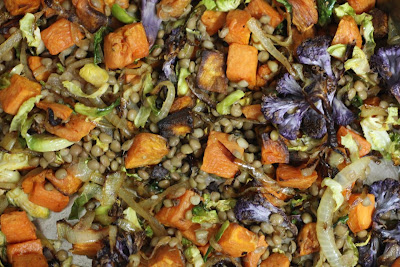 The salad was less crazy.  Just colourful.  When we got home from the Fitzroy Market I had some of the sourdough loaf of bread with peanut butter.  We had lovely blue sunny skies at the market but once we got home the grey clouds and rain reminded us that winter is truly on the way.  I was happy to turn on the oven and roast lots of vegies. 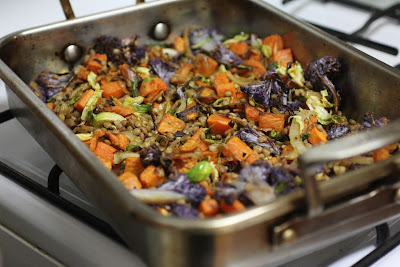 This was a great way to clear out the fridge.  The dressing was rather tasty too.  I loved the salad and found it very satisfying.  We ate it without an bread or grains on the side.  Perhaps this was due to scoffing the fresh bread in the afternoon.  The next day I had some of the leftovers for lunch and added some cooked rice I had in the fridge.  It was lovely with rice.  Just not necessary. 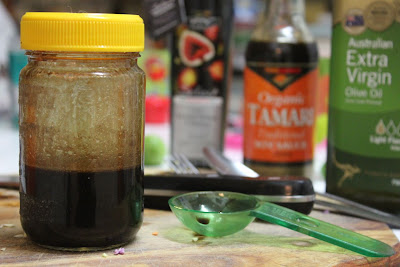 I am sending this salad to Catherine of Cates Cates for her Anyone can cook fabulous vegetarian food challenge.  The theme for May is legumes.  I considered two tins of legumes in this salad but decided to use some feta as well.  The feta gave the salad a freshness but it is not essential because there are so many other great flavours.  More beans or some walnuts would make a lovely substitute or you could just leave it out. 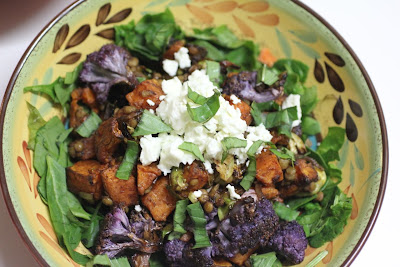 *I meant to post this yesterday but the internet was playing up.  We woke and found our modem was not working.  Sylvia was concerned when we said it might be the power because she had just seen a Peppa Pig episode called Power Cut.  We bought a new modem and E spent quite some time getting it working.  Then Blogger refused to load my photos!  Then today the modem stopped again.  And started. Not great when combined with a narky child and bad television reception.  Argh!  Let's just think about how pretty the salad looked!

Firstly chop and roast the vegetables.  I put them in three separate trays, each with a drizzle of olive oil and a pinch of salt and then I tossed to check they had enough oil to cover them.  I roasted the sweet potato for 60 to 70 minutes at 230 C until soft and charred slightly around the edges.  The purple cauliflower roasted for 40 to 50 minutes at 230 C until the edges of florets are slightly charred and it is soft but not falling apart.  The brussels sprouts were roasted for 20 minutes at 230 C - enough for the small bits to char but some of the larger slices were not quite soft.

While the vegetables roast, heat 2 to 3 tsp of olive oil on a large heavy based non-stick frypan.  Fry the onion over medium to high heat for about 10 to 20 minutes until soft and slightly charred at the edges.

Make the dressing by shaking all ingredients in a jar (with a lid on).

I cooked my vegetables in batches so by the end some had cooled.  I mixed all roasted vegetables, onions and lentils in one of the roasting tins and returned to the oven for about 10 minutes at 180 C to warm everything through.

Once the salad was warmed, I tossed about 2/3 to 3/4 of dressing through.  I arranged chopped spinach in the dinner bowls, served salad over the spinach, then sprinkled with feta, scattered with torn basil leaves and gave a good grind of black pepper.

NOTE: my oven is slow so other more efficient ovens may bake vegies quicker and at lower temperatures!

On the Stereo:
Oak, Ash, Thorn: Various Artists
Posted by Johanna GGG at 23:57