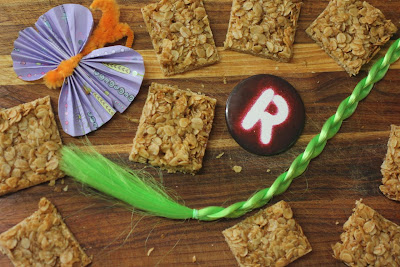 Today Sylvia and I were down the street buying oats to make Katie Morag's porridgies.  We happened to see a hairband attached to a green plait.  I was delighted at how much she loved it.  There was a time when I had green hair.  I enjoyed it.  Yet there were times when it was awkward dealing with people I didn't know.  I chose to be different back then.

In Reconciliation Week,  I want to spare a thought for those who don't make that choice but are exhausted from dealing with difference and racism.  So this is a rambling post that reflects on Aboriginal and Torres Strait Islander issues as well as children's books. 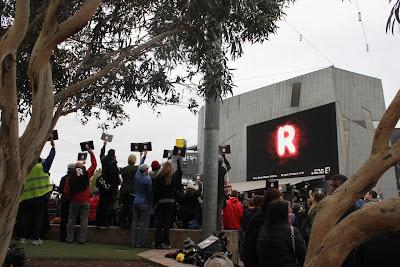 I was angry this morning.  The newspapers and the radio were focusing on the story of Aboriginal footballer Adam Goodes dealing with a racist taunt during a match on the weekend.  Yet nowhere in the conversation was the good news story of Michael Long beginning a journey around Australia yesterday to promote the referendum on the recognition of Aboriginal and Torres Strait Islander people in our Australian Constitution.

We went to the start of the journey at Federation Square.  It was an inspiring event with speeches from many leaders from Australia's Indigenous community and politicians.  Admittedly I didn't follow all of it due to a lack of familiarity with Sunday public transport and a small child wanting attention, not to mention the nearby cathedral bells.  Then we followed Michael Long on the start of his walk along the Yarra River. 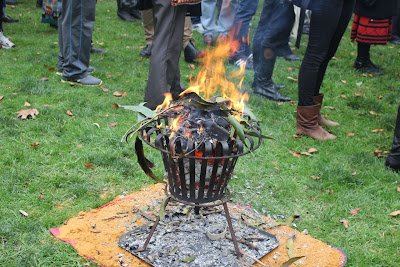 Adam Goodes had made an important contribution to the conversation about racism in Australia.  His response to the taunt was admirable in that it was kind and intelligent.  Yet it is only part of the conversation.

Recognising the long history of Aboriginal and Torres Strait Islander people in the Constitution is an important way for all Australians to make some amends for the shameful treatment of these peoples since Colonisation.  Our nation needs to build more respect and pride in our Indigenous culture.  It wont happen unless we are prepared to formally acknowledge it. 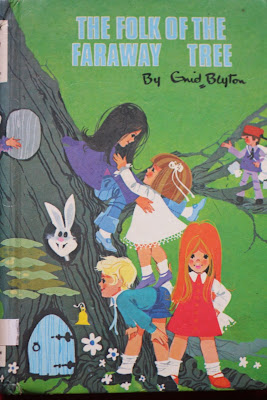 And from the Indigenous culture of my country to my childhood of children's books (where Indigenous people were only noticeable by their absence.)  We have recently read Sylvia The Folk of The Faraway Tree by Enid Blyton.  It makes me feel very nostalgic because I am sure this is the actual book I read as a child.  There is a 'b' label on the spine and a piece of paper glued to the back cover so we could play libraries and date stamp it.

Coming from a family of seven children there are many books dear to me from childhood that I don't own.  (The faraway tree book is on loan from my mum).  I do still have a few that were given to me.  Most of them are so well loved that they are in poor condition.  Yet I am still rather fond of them and wanted to indulge in showing a few on my blog. 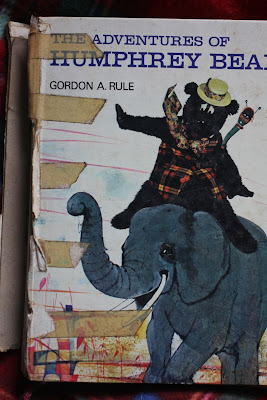 Humphrey B Bear is an Australian children's television icon.  He will have been entertaining children for 50 years in 2015.  I loved his television show but even more, I loved this book of stories about Humphrey that I was given by my grandparents.  I particularly loved the story about him being in hospital.  I just loved the nurse in the black tights and white shoes.  Perhaps that is why one of my few memories about being in hospital aged 5 was the slippers that were bought for the visit.  They had a picture of pussy cats on them that I thought was beautiful.  Oh innocent days. 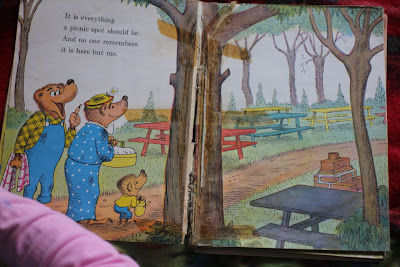 You might notice that the cover of my Humphrey book is held on by sticky tape.  My Berenstain Bears book, the Bears Picnic, has lost its cover, is ripped and held together by sticky tape.  I read it to Sylvia today and it made her laugh.  As an adult I still love the story of the family in search of a perfect picnic place because I now know the feeling.  One of my favourite lines in a children's book has to be in here - "Uh oh dad, here comes the rains!" 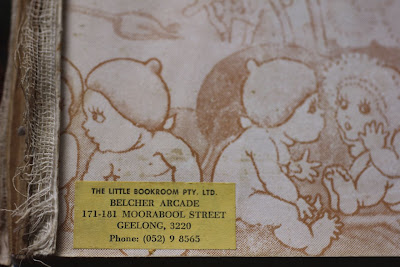 Another of my favourite books from childhood is The Adventures of Snugglepot and Cuddlepie.  It has also lost its cover.  (These books have travelled with me over many moves.)   I noticed the old phone number on the retailer's sticker.  I loved the blossom babies when I was little but goodness I found the banksia men scary. 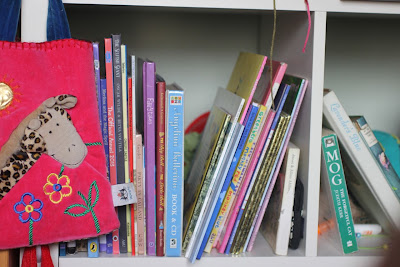 We were often given books as children.  Sylvia also has many books.  Both E and myself are bibliophiles and can't resist a book.  However, while Sylvia will read some of the books I loved as children, her reading also includes many books that were written when I was adult.  Among these is the delightful Katie Morag books by Mairi Hedderwick.  Given that Sylvia is half Scottish, E (and his family) loves buying books from his homeland. 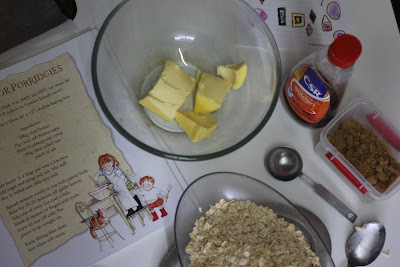 Today we made Porridgies out of the Katie Morag Big Storybook.  It is a simple slice of oats, butter, sugar and golden syrup that many might call Flapjacks.  For me, it is reminiscent of our Aussie ANZAC Biscuits.  Sylvia was too busy with 'work' to help make the porridgies but she was very excited when they were ready to come out of the oven.  So excited that we had to read 'the Baking Day Secret', the story where they eat the porridgies in their midnight feast. 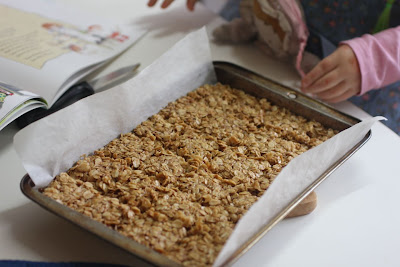 I have had so many flapjacks fall apart on me that I was quite pleased these held together nicely.  Especially after they seemed so thinly spread in the slice tin.  They also cut neatly once cooled.  They were very soft when just out of the oven (as Katie Morag likes to eat them) but a little chewy and crunchy around the edges.  I used butter rather than margarine.  I think in such a simple slice the butter was noticeable.  This wont stop me trying it with margarine if that is all I have on hand when we made them again. 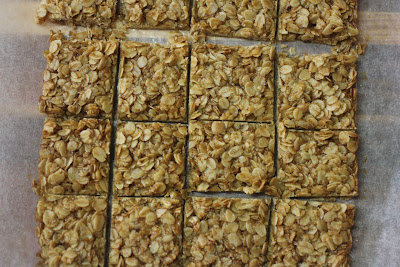 I think Sylvia and I could have eaten the whole batch.  But we didn't.  We knew that E would love them.  They are a quintessential Scottish slice.  Loads of oats and sugar and butter but no fruit or chocolate.  Just the sort of thing E often requests.  I suspect he might be requesting these again. 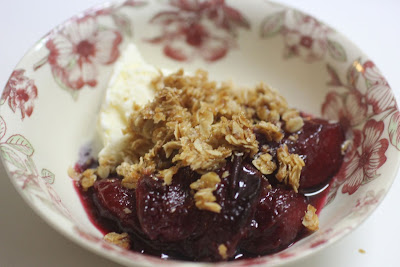 Finally we ate them for dessert tonight crumbled over ice cream and stewed plums.  I think if I substituted yoghurt for ice cream I might just very well love this first thing in the morning, despite being a savoury breakfast person.  (I am quite into my porridge lately as long as it is served with fruit.)

I am sending the porridgies to Michelle at Feeding Boys and a Firefighter who is hosting this month's Breakfast Club (founded by Helen of Fuss Free Flavours).  The theme this month is bakes.

Previously on Green Gourmet Giraffe:
One year ago: The ABC of GGG
Two years ago: Ricki's breakfast patties and Delia's bread
Three years ago: WHB Plums: a history, trivia and a cake
Four years ago: The Carlton Paragon Café
Five years ago: Rethinking Bread and Butter Pudding

Preheat oven to 160 C (I did 170 C for my slow oven) and line a slice tin (18 x 28cm) with baking paper.Melt butter in a medium bowl in the microwave (or a pot on the  stovetop).  Stir in brown sugar and golden syrup.  Mix in oats.  Spread into prepared tin.  Bake for 25 to 35 minutes (I did 30 minutes) until golden brown.  Mark squares or bars while slice still warm.  Cool in tin and then cut into squares or bars.  Store in an airtight tin.

UPDATE: We make these often and usually use Nuttalex margarine in place of butter, which makes them easily vegan.

On the Stereo:
Utopia Parkway: Fountains of Wayne
Posted by Johanna GGG at 22:00