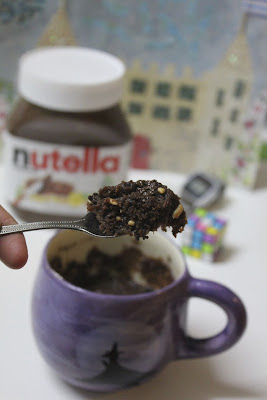 Sylvia and I had been to the city to have lunch with E.  On the way home we stopped at the supermarket and in a weak moment tossed a large jar of nutella in our basket.  We don't often have nutella in the house.  If I hadn't had a freezer full of ice cream, chocolate shortbread dough and uncooked doughnuts, I would have been more tempted to bake with my nutella.  As it is, a single serve brownie filled the spot without overfilling the kitchen. 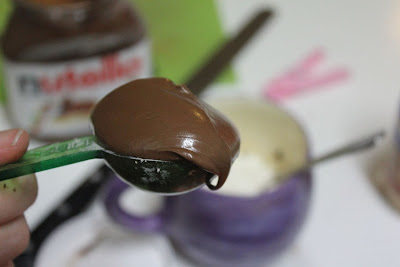 No egg in a single serve mug cake works really well for me as I found recently.  I decided to try a brownie version and be even more decadent.  It was the nutella that made me do it.  It was brilliant.  Rich, gooey, fudgy.  When I say fudgy I mean sludgy not sugary.  The sort of brownie that sticks to the spoon.  I ate it watching Downton Abbey, watching beautiful people in a beautiful house while eating this dreamy brownie. 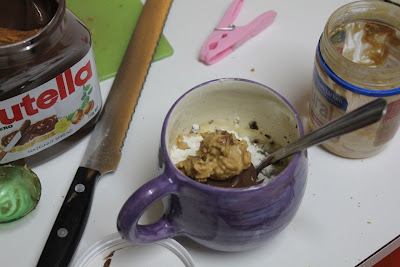 It was delicious.  I was proud of myself.  The jar of nutella was huge.  I made it again.  It was a disaster.  Dry and inedible.  Microwaves are tricky beasts.  In retrospect I realised that my initial tablespoon of nutella was probably 2 tablespoons.  (See photo of the nutella I used on my first go.)  And I used a larger banana the first time.  I did what any sensible blogger would do and made it again. 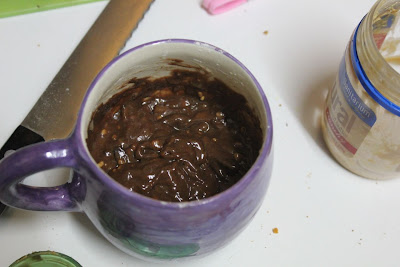 My third was much better (below) but it lacked the dreamy heights of the first brownie.  Perhaps my cocoa in the first one was more generous too.  The photo above of the mixture is the guide to how the mixture should look.  My nutella is now finished so I am unlikely to be experimenting more in the near future.  I like the idea though it is a bit too much banana for me for when I want a chocolate hit.  I am posting it as work in progress but for now will prefer this single serve chocolate microwave cake. 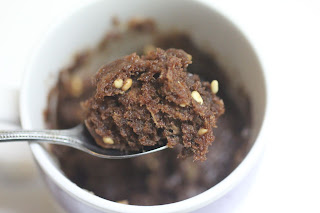 Mix all ingredients in a microwave proof mug.  Microwave for between 1 minute 30 seconds (third time - slightly underdone) and 2 minutes 20 seconds (first time).  Mine is not a very powerful microwave and time will differ from microwave to microwave as well as if the ingredients volume changes.  The mixture should look cooked but not too dry.  A spoon dug deep down into the brownie to take out a spoonful will show you if you need a bit more time.

On the Stereo:
The Best of The Pogues
Posted by Johanna GGG at 13:04