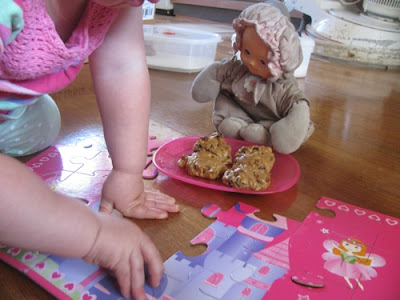 Sylvia has some strange ideas about the world. She loves pockets but thinks they are any opening in her clothes where she can stuff some trinket - any trouser legs, cleavage or waistband will do. She loves to ask me "have oo got a pocket?" and usually has something to put in it.

Anyone in a pram is a "baby" even if bigger than her. Any female is a little girl. I don't know what women at tram stops think when Sylvia says "dere's a liddle giiiiiirl". (She must be a contender for the longest vowels entry in the Guiness Book of Records).

She also loves "sugar" on her cereal. Not the sweet granules that you and I know. Her concept of sugar is any finely ground cereal either at the bottom of the packet or which she crumbles. She loves to sprinkle "sugar" over her bowl of cornflakes and mini wheats. 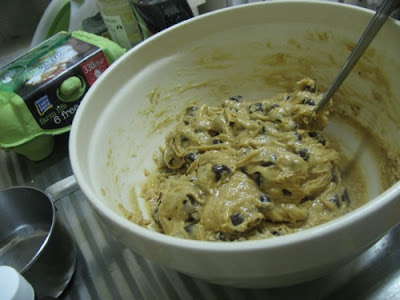 I wonder where she gets this idea of sugar. Neither E nor I sprinkle sugar over our cereal. In fact I try and keep the sugar in her food to a minimum. I don't always succeed but I do my best. This week, for example, I made some choc chip cookies that were high in protein and low in added sugar. The main sweetness comes from the choc chips because the small amount of maple syrup I added to the batter don't make it terribly sweet. 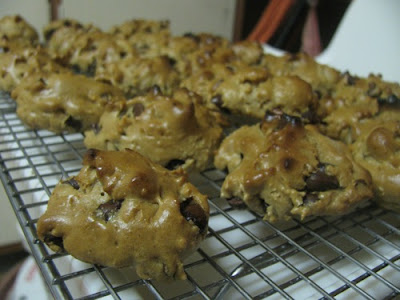 It leads me to ask was it just the lack of sugar that made such a difference to the texture. I once made a cake and forgot to add sugar. When I remembered to add the sugar to the batter I was surprised at just how much the texture changed. I probably prefer the peanut butter chewiness but I quite enjoyed the cakey cashew cookies. I was surprised how nut butter and egg can replicate the texture of butter, flour and egg.

While E wasn't so keen on these biscuits, Sylvia and I have been enjoying them for snacks. I feel like they give her a little protein boost, even if she needs some choc chips to wash the nutrients down. Though she still needs to learn that you must put them in your mouth rather than crumbling them over the couch for maximum benefit. Grrrr! The bikkies also gave me a tad extra protein because I made them on a night that I made soup. 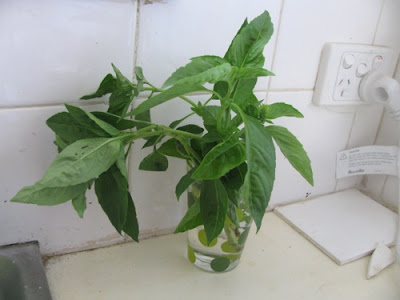 The simple tomato soup comes from the lovely Lucy of Nourish Me. I have had my eye on it for a long time. The time to make it finally came this week with our kitchen being quite minimal due to renovations. It smelled amazing and smoky as it cooked but needed a little seasoning at the end. I have come a long way from days of disliking eating tomatoes by themselves. 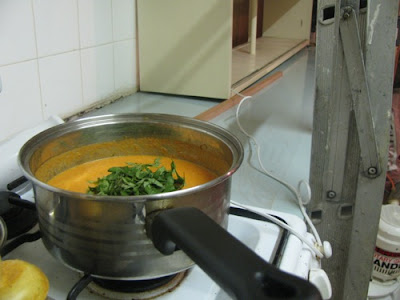 I also added creme fraiche rather than yoghurt at the end simply due to the novelty of finding it in the supermarket, and I added basil because my mum gave me some. Lucy sieved her soup and I appreciate why she did it but I don't even know where the sieve is. (You can see I value my hand held blender far more than a sieve when packing up kitchen implements.) I think sieving would make a more velvety texture but even so it was a lovely simple soup. Below is what I did. 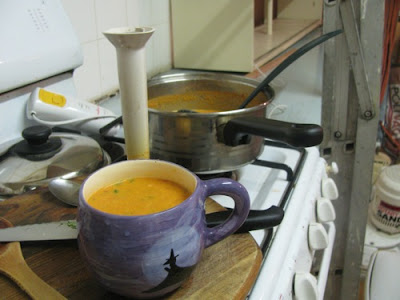 Previously on Green Gourmet Giraffe:
This time last year: Sydney - a gaytime and some lessons
This time three years ago: Mulligatawny and dubious traditions

Simple Tomato Soup
Adapted from Nourish Me
serves 2 people as a main
Place chopped tomatoes, olive oil and whisky in a large saucepan and cook over low heat for about 15 minutes. I found that this gave the kitchen a wonderful smoky aroma. Season lightly with chilli powder, smoked paprika and salt. Stir in creme fraiche and basil. Blend with a hand held blender. Sieve if desired for a smoother soup.


Preheat oven to 180 C or 350F and line baking trays with baking paper or grease.

In a large bowl, use a spoon to cream together cashew butter, maple syrup, vanilla, cinnamon and baking soda. Check sweetness is ok. Stir in egg until smooth. Add cashews (if using) and chocolate chips and stir until just combined.

Spoon tablespoonfuls of batter onto prepared trays. Mine didn't spread so the shape I dropped onto the cookie sheet was the shape that ended up in the cookies. Bake for 10-13 minutes until golden brown (mine looked like meringues - I presume because there wasn't much sugar in the batter). Kim says she baked hers until they didn't seem so soft so maybe if I had baked mine longer the texture might have been a bit more chewy.

Cool a few minutes and transfer to a wire rack to cool completely. Store in an airtight container. Lasts well for 3 days.

On the Stereo:
Back to Basics: Billy Bragg