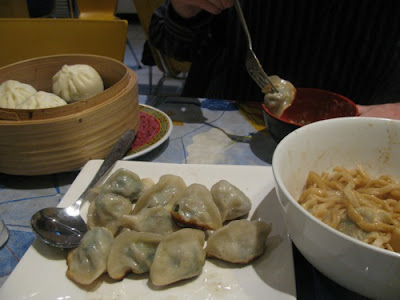 Last week my mum looked after Sylvia while E and I had a night on the town. We had dinner at the Shanghai Noodle House before going to see Joanna Newsom. When I started the blog we would go out to dinner in the city regularly but these days it is a rare occasion. It was finally an opportunity to eat dumplings in Little China Town. 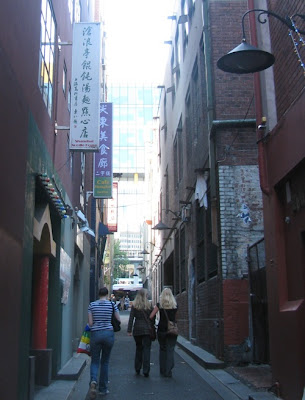 Initially I thought I would choose The Camy Shanghai Dumpling and Noodles Restaurant. I had originally seen it on Where's the Beef back in 2007 and still not made it there. But I then saw comments that the nearby Shanghai Noodle House was quieter and had fried dumplings. So that is why we headed up one of the city's laneways on a pleasant night last week. 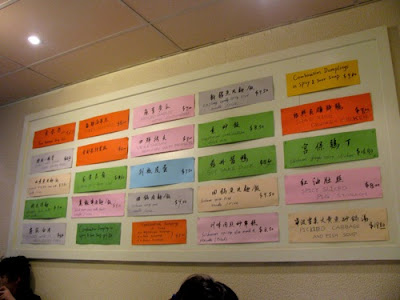 This is Chinese food but not as I have ever seen it in restaurants before. (In fact we got a menu in our post box last night and I checked but no dumplings were on offer.) I have been to the Flower Drum and eaten yum cha in Melbourne's China Town years ago but nothing has really enthused me like this meal. It wasn't perfect. The ambience was cheap and cheerful plastic tables lit by bright fluorescent lights. I particularly liked the colourful handmade specials board. 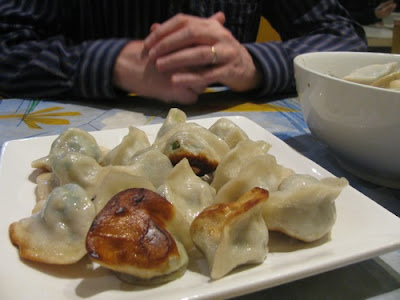 I had to order a plate of dumplings and couldn't resist the fried ones. The menu is the antidote to fancy menus that list every ingredient. "Vegetarian dumpling" tells you nothing about the filling except that it isn't meat. In fact I am not quite sure what was in them - I would guess maybe some mushrooms, greens and water chestnuts. The crisp bottoms of the dumplings were a delight and I enjoyed the chunkiness of the filling.

E chose a bowl of steamed dumplings with peanut sauce and noodles. The peanut sauce was unlike any that we had eaten before: slightly spicy and salty but not as rich as the ones I am used to. I loved the thick white noodles. I am not sure if we were meant to stir it a bit more but the peanut sauce soon ran out and we ate the last of the noodles with a soy sauce marinade at the bottom of the bowl. It may have been our only protein of the night but I am not sure. 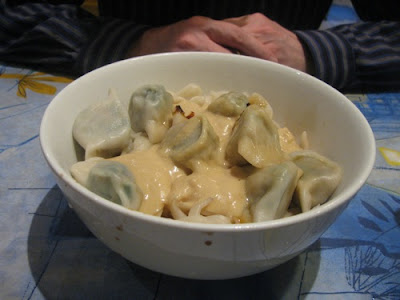 Our meal was carbohydrate-heavy so I am pleased to show you (below) that there were some bright greens in our meal. This is one of the vegetarian steamed buns. I was curious to try them after making a batch with my friend Yaz late last year. I loved the green filling which I think had a slight sweetness to it and I think there were mushrooms in there too.

If I came back I would be tempted to try a soup, if the stock was vegetarian. It is a better way to get a few vegetables with the dumplings. We did have a few hiccups with my clumsiness with a cup of water demonstrating that the serviettes were quite flimsy for wiping up spills, and our bill being added up wrongly ($28 at first and then $21 when re-counted). However it was half the price of takeaway meals we have had lately. I am very satisfied to find some Chinese food that I love and plan to try making some dumplings at home soon. 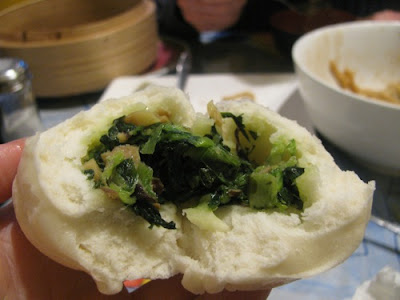 I also am pleased that we were able to eat quickly and make our way to the Melbourne Recital Centre to see Joanna Newsom. We arrived just as the support act started. It was just as well that we were seated at the start because Ryan Francesconi, in introducing his act, implored us to think about the Japanese earthquake and "you know what, don't even clap, it's not about me". He forgot it was a proper concert where they open the doors after each song to let latecomers in. After a while he said we had better clap because he realised the latecomers were waiting for their cue.

Joanna Newsom, singer-songwriter, indie-folk singer, harpist, pianist, accompanied by guitar, violin, trumbone and drums, was amazing. She took great joy in performing, her breathy-girlie voice packed an astonishing power, and the backing band added wonderful texture. An uplifting performance in a beautiful space. You may not get the chance to see Joanna Newsom but if you are local and get the chance to see the gorgeous new Melbourne Recital Centre, I highly recommend it - preceded by dumplings in China town, of course.