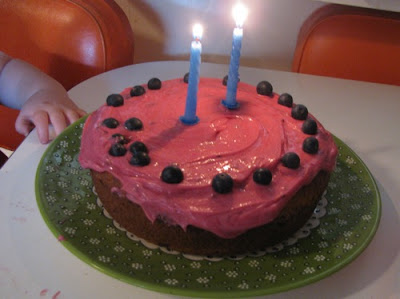 I have told you about Sylvia's birthday pizza in my last post. Dessert was, of course, birthday cake. I asked Sylvia to choose between chocolate, carrot and banana cake. She chose banana. I wasn't sure she understood the decision but she did yell out banana quite a few times. You might notice that this post has a lot of pink. I don't generally have a lot of pink in my life but I wanted to try the beetroot powder in a frosting. This seemed like a good opportunity. 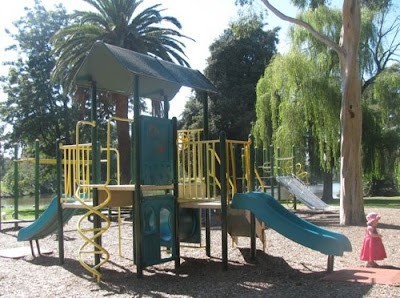 Sylvia doesn't wear lots of pink either. You can see in the above photo of her at the park on her birthday that she wore a gorgeous pink party frock on her birthday. (The dress can also be glimpsed in the Teatime and Tales post about her birthday lunch.) It was a present from my sister, Chris, and the colour is wonderful. Sometimes pink is glorious!

Perhaps Sylvia's frock is the reason a flock of geese starting to rush towards us in a Hitchcockian moment when we arrived at the Coburg Lake playground. Fortunately my country childhood has taught me to stamp my foot and hiss at them. It stopped them in their tracks and Sylvia had fun on the swings ("fings) watching the "birdies". 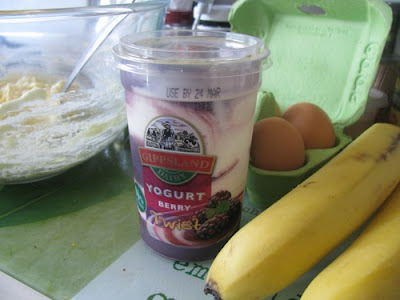 Back at home, I had some berry yoghurt in the fridge so I decided to make the Banana and Passionfruit Yoghurt from my AWW Cakes and Slices cookbook. I was pleased it included wholemeal flour. Given that the yoghurt seemed quite sweet, I cut the amount of sugar in half. 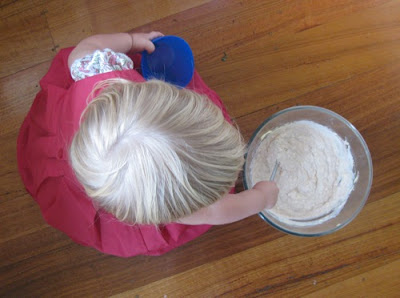 Sylvia helped with baking the cake. She loves to tip in the flour and have a stir. I have to watch she doesn't just flick all the batter out of the bowl. I was glad to get the cake in the oven and start making the pizza. I was so behind that I even put the cake in the fridge while we ate pizza to cool it a bit before I added the frosting. 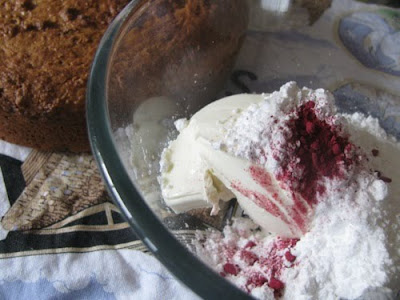 I found a frosting recipe I had used for a wholemeal chocolate cake that didn't make oodles of frosting and didn't use truckloads of sugar. The beetroot powder made a beautiful bold pink colour. In future I should remember to sift the powder which has got a little lumpy over the time since I have opened it. Lastly I decided to decorate with blueberries. Sylvia helped to put the blueberries on the cake and if you look at the top picture you might spot where she put them. 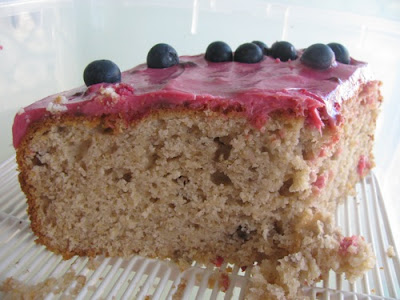 The cake was a success. We lit the two candles for Sylvia and sang her happy birthday - one of her current favourite songs that she loves to sing. She refused to blow out the candles, despite enjoying blowing out candles on my birthday. Contrary child! She ate quite a bit of cake. So did E and I.

I found it slightly bland on the first night and thought a little vanilla might pep it up. It wasn't very sweet nor strongly flavoured. However, unusually for cakes, I thought the flavour and texture improved over the next couple of days. 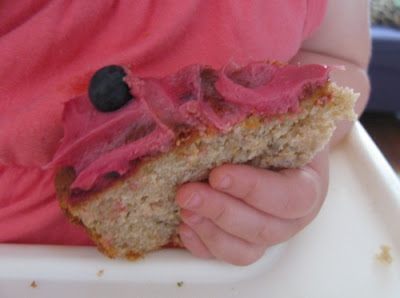 Maybe Sylvia agreed because she started to try eating the frosting on the second day. You can see the tracks of her curious finger in the above photo. She also enjoyed the blueberries. E thought it was such a good cake he asked if he could have this cake for his birthday.

We have a few pieces left in the freezer but I am yet to defrost and check how they travel. I froze the leftover cake when I made another cake for family and friends on the weekend. Coming to the blog in the next few days.

Previously on Green Gourmet Giraffe:
This time last year: Each Peach - baby blocks and ice cream that rocks
This time two years ago: Hospital food and mum’s cooking
This time three years ago: My Friend the Chocolate Cake

Banana and berry yoghurt cake
adapted from the Australian Women's Weekly Cakes and Slices cookbook
Frosting
adapted from here
Cream butter and sugar. Add egg and mix well. Add yoghurt, vanilla and bananas. Mix well. Gently mix in flours until combined. Tip into a lined and greased 20cm round cake tin. Bake at 180 C for about 1 hour. Cool on a wire rack.

To make frosting, mix cream cheese, icing sugar and beetroot powder. Spread over the top of the cake and decorate with a ring of blueberries around the border of the cake.