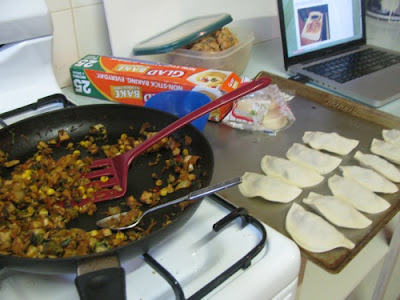 Inspired by my recent visit to the Shanghai Noodle House in Little Chinatown, I bought geegaw wrappers in the supermarket to make dumplings. I wanted those wrappers. Even though there was only one packet left and it had a rip in it, I was compelled to buy it. 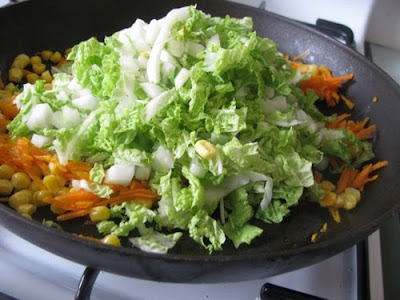 The rip in the packet of wrappers meant I needed to use it quickly. All I needed was some cabbage. I set to making dumplings as soon as I bought a wombak cabbage and my new oven was functioning (even though the renovations are not yet finished - but there is some hope it wont be long). 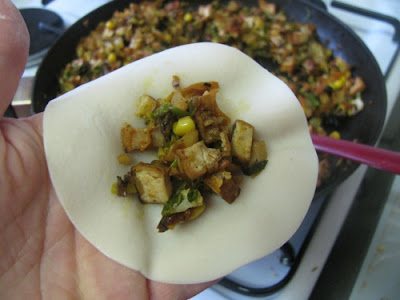 I love how varied dumplings can be. In the UK they are little balls of dough simmered in a hearty stew, in Italy they are stylish chunks gnocchi or ravioli in pasta sauce, in Jewish culture, they are matzo balls in chicken broth, in Austria they are baked and stuffed and can be sweet concoctions, in Poland they are little parcels of pierogi with lots of creamy sauce, in India they are spicy koftas in gravy. There is even a potato dumpling museum in Germany - I want to go there!

No matter what they are, dumplings are always comforting. I don't make them enough. But I do love finding recipes to inspire me. I have recently been checking out recipes on Where's the Beef and Leading the Good Life which helped me mould the contents of my vegetable crisper into dumplings. 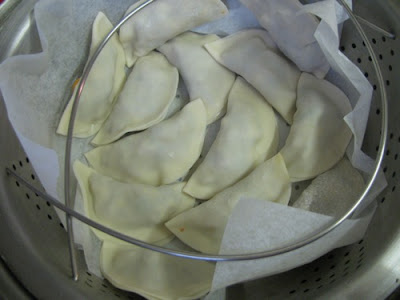 I steamed them, partly because it is easy and forgiving. I sat with Sylvia while the dumplings steamed. It was her bedtime but she was unsettled and needed lots of attention. As we sat, the timer rang and it took me some time to get out to turn off the hotplate but the dumplings were fine. That was the second batch. I steamed the first batch, hoping Sylvia might enjoy one or two. She liked nibbling at the edges of the wrappers but one she got to the filling she spat it out. It was a little spicy for me but E found it just right. 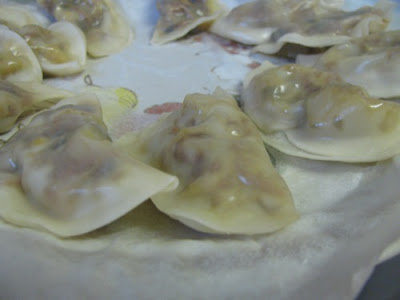 I wasn't quite sure how to serve them. By the time I had made them I served them plain. I figured they had enough veg and seasoning but, really, I was too tired. In an ideal world I might have made a dipping sauce and even some salad to serve with them. Maybe next time.

Steamed Vegetarian Dumplings
with inspiration from Where's the Beef* and Leading the Good Life
makes 30 dumplings (serves 2 without side dishes)
*For gluten free wrappers, you can follow Michael's recipe at the above link. Thanks Cindy for the reminder of this recipe. And use a GF soy sauce such as tamari.

Heat oil in frypan and place in vegetables as you chop them in the order listed. Once all vegetables are in the pan, fry until vegetables are soft. Add tofu and seasonings and stir until all liquid is absorbed.

To assemble: Peel a wrapper off, place it in the palm of your hand and place one or two teaspoonfuls in the middle. Dip a finger in the water and dampen half of the edges. Fold over and seal well.

Heat water in the bottom of a steamer. Line steamer with baking paper and arrange dumplings on it. Place lid on and steam dumplings for 15 minutes. If you are caught up when the timer rings and you can't get to it, so long as you have put a generous amount of water in the bottom of the steamer, it will be fine. When they are done, I lifted the dumplings on the paper, gently pulled each off the paper (because mine were a little crowed) and arranged them nicely.

On the stereo:
Dunkle Walder: Strydewolf
Posted by Johanna GGG at 19:52