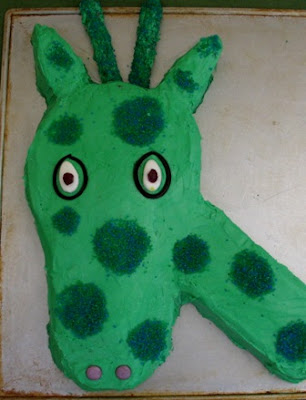 A year ago today I started my blog with a Vampire Cake that I made for E’s birthday. This year he shared his birthday cake with my blog and it had to be a Green Gourmet Giraffe Birthday Cake!

I thought it was the right moment to share how I came up with the name of my blog: Green is a favourite colour because it is so cheerful and hopeful. It also signifies green politics that encompass vegetarianism, feminism, environmentalism and social justice movements. Gourmet was inserted into the title because I like alliteration and I wanted it clear that it was a food blog, although I don’t believe much of my cooking is terribly gourmet! I did a school project on the 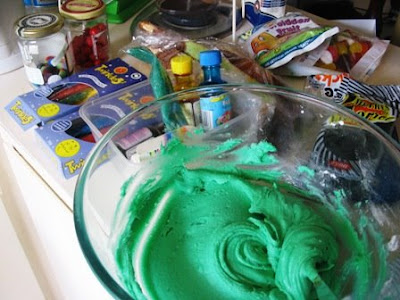 gorgeous, gracefully gangly Giraffe when I was 7 years old and have been fascinated by them ever since. Unfortunately I have lost the booklet I did but I can assure you my pictures were quite amusing. The giraffe is the tallest land-living creature and has a deadly kick and a tongue long enough to clean its face. They are mute, require 1.9 hours sleep on average a day and are quite vulnerable to lightning. Being tall has its drawbacks! They always seem so peaceful and gentle at the zoo, and I am sure would make a lovely pet.

So it seemed fitting - and fun - to make a green giraffe cake to celebrate a year of blogging. I love my novelty cakes. This cake comes from the esteemed Australian Women’s Weekly Children’s Birthday Cake Book. Of course, in the book, the giraffe is yellow with brown spots.

Given that E loves plain vanilla sponge, I love chocolate and my blog is green, I decided that the best compromise would be a marble cake. I used to love this cake when I was little but my mum always made it with vanilla, chocolate and pink. It is really a pretentious butter cake. I found a recipe for choc orange marble cake, increased the quantity and changed it to a choc-lime-vanilla 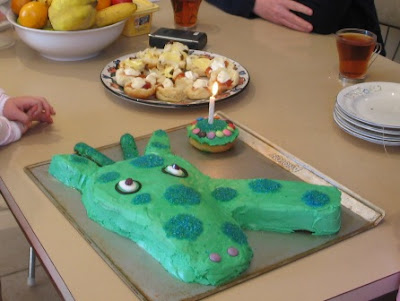 combination. You could also make other cakes such as a gluten free chocolate cake or a plain butter cake, so long as it is a firm cake that keeps its shape. And if you don’t want a green giraffe you can always colour the icing yellow and use brown sprinkles for the spots. My instructions on how to make a giraffe cake are lengthy as I wanted to share some of the problems and tricks.

We took the cake down to Geelong to share it with some of my family. With all the sickly sweet icing, I was only too happy to share it around, and it was nice to see the excitement on my nieces' faces when they saw it. With my mum's scones and my dad in charge of drinks, we had a lovely afternoon tea. A birthday cake wants a candle, and the little gluten free cake I made for my little niece Grace made a perfect candle holder. Happy Birthday E! Happy Birthday Green Gourmet Giraffe! 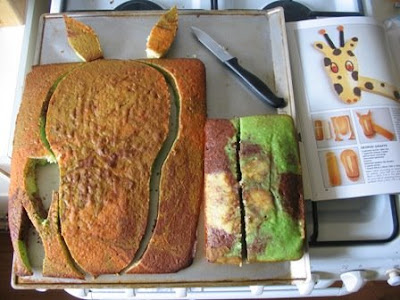 inch). I used a large baking tray. Cover with plastic cling wrap if leaving overnight. Use a small sharp knife (preferably serrated) to cut the cake.

Cut a head shape out of the large flat rectangular cake. It should be quite thin so you might need to trim the sides a little. Cut the ears out of the trimmings – they should be about one third of the length of the face and have horizontal bottoms so they sit out at the side of the head a little. If I was to change my giraffe I would do the ears a bit bigger and a bit less central on top of the head.

Cut a thin layer from the top of the loaf and place on the middle of the head to shape the nose a bit. If your loaf tin is thicker like mine trim one of the long sides so it is about 8cm (3 inches) horizontally. Cut a horizontal line across the top so it will sit against the head at an angle to make the neck.

Remove the trimmings and assemble the cake to look like an uniced giraffe, as in my photo. You will have quite a lot of cake leftover so you might want to make trifle or these cookies or just have a mountain of iced bits of leftover cake.

Make the icing (or frosting) by mixing icing sugar with the margarine and enough boiling water to make a smooth paste. I have given very approximate quantities here, so use your judgement on how much you need. Add some food colouring to make it green, either with green dye or a mixture of blue and yellow. Spread icing evenly over the cake with a butter knife. This is the most time consuming part of the preparation and requires patience to go around the nooks and crannies and do all the sides.

Once the icing is smoothly covering the giraffe, it is time to give her some personality. I cut some white bits off a strawberries and cream jube and then cut the eyeball out of a coloured jube and used a tiny bit of icing to attach the eyeball to the white and put them on the cake where the eyes would be. I cut some liquorice strip and used it to go around each eye. I place the smarties at the bottom to be the nostrils.

I mixed two thirds green and a third blue sprinkles in a small bowl. I used a teaspoon to drop small piles of sprinkles and smoothed them out into round patches. I found it hard to do this without a few bits of sprinkles scattering outside the circle. Finally I spread a little icing over the chocolate liquorice logs and rolled them in the sprinkles. I made sure there was a little icing on the end to meet the head and also on the bottom so the ‘horns’ would stick to the head and to the board. In the AWW, it suggested wrapping thin liquorice strips tightly around a lollypop stick - or ice cream stick? - and placing a jube at the top.

NB if you don’t want to spoil the appearance of the giraffe with candles, you can have one or a few little cakes on the side to put candles in. Just spread cake(s) with green icing and decorate with some sprinkles or lollies (sweeties, candies) so it looks celebratory.

Grease and line a lamington tin and a thin loaf tin (see instructions above). Preheat oven to 180 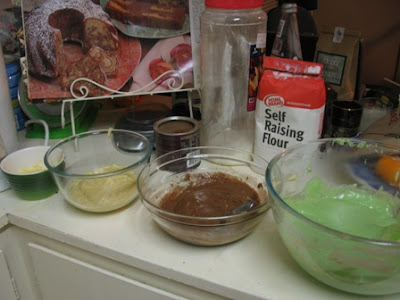 C. If using melted chocolate, melt it now so it cools while you prepare the batter.

Cream butter, vanilla essence and sugar. Add eggs, beating after each addition. (If you are catering for any gluten free diets, you can take out a few spoons of the mixture at this point and add a little gluten free flour, baking powder and milk then bake in a ramekin or muffin tin.) Add flour and milk and stir to combine.

Divide the mixture evenly among three bowls. Stir the melted chocolate or cocoa into one bowl, the lime zest and a few drops of green food dye into the second and leave the third bowl plain. 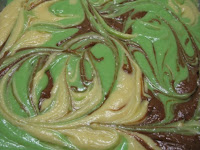 Drop blobs of cake batter into the pans trying to evenly distribute the colours. Then take a knife and swirl the colours around once or twice to create a marbled effect.

Bake cakes in moderate oven for about 30 minutes or til a skewer comes out cleanly. Cool on a wire rack. The recipe suggested a fudge chocolate frosting but I chose a plain icing for the giraffe cake (see above).

On the stereo:
Café Concerto: Pulp
Posted by Johanna GGG at 20:52