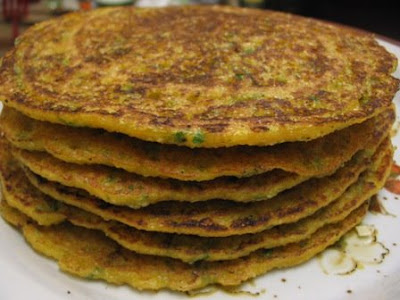 I’d never heard of dosa until last year when my friend Yaz raved to me about the masala dosa at Nila. It truly was a joy to behold. A wafer-thin pancake, crisp on one side, soft underbelly and stuffed with mushy spicy potatoes. Ever since I have hankered after dosa. How I have admired bloggers who dare to make dosa. Then I saw that Srivalli is holding an event to celebrate dosa.

Wikipedia describes dosa as a ‘South Indian crepe’. It seems that dosa is usually made of rice and split skinned urad dal (a type of black bean or lentil) which are soaked overnight to ferment, 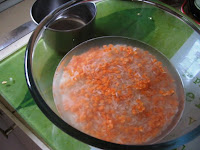 finely ground and then fried like a pancake. Apparently it is considered a breakfast dish but can be eaten at other times of day. Making dosa is quite foreign to me and I found Lisa’s advice very useful.

I have written before that I am challenged by Indian cooking. Lately I have made a kofta dish so spicy that E didn’t even reach for Tabasco, a dahl sadly lacking in spice, and a chappati that involved the smoke alarm (more of that another time). So I was a little wary of trying my hand at dosa. I am not good at light and fluffy food which seems likely to float to the heavens if not weighted by a good masala. Instead I turned to a red lentil dosa recipe in one of my cookbooks because the picture suggested it was made of sturdier stuff.

The biggest challenge with the dosa was timing. I needed to plan 32 hours ahead! This makes bread baking seem quick. But plan I did. Last night I got home from one of the most bleak, unrelenting, unrelaxing films I have seen for ages (Before the Devil Knows You’re Dead) and stood with the noise of food processor motor pounding in my head as I willed the rice and lentil mixture to become smooth. Nay chance! It took forever and then I gave up and decided I would have to live with a little 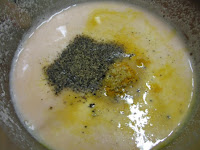 gritty texture. Today I rushed home from work and checked the mixture again, hoping it might have softened overnight but it still felt more mud pie than the anticipated smooth batter.

I almost threw out the batter and swore off attempting any more Indian food. But I don’t like wasting food any more than I like giving up so I persevered. I was pleasantly surprised with the results. The itty bitty rice particles seemed to dissolve on the frypan. The dosa was wonderfully spicy and chewy. I served it with a mildly spiced chowder. It was unusual, nice, different!

I will be trying out more dosa after this one. Thanks Srivalli for the prompt I needed.

Place rice, red lentils and water in a small bowl and soak for 8 hours. Drain water and reserve. Place lentils and rice in food processor and blend til smooth. Then add reserved water gradually. (Mine was more gritty than smooth and I found I needed a little water to get it to this stage.) Cover and stand for 24 hours.

Stir in the turmeric, pepper and coriander (or parsley). The recipe also suggests adding ginger, chilli or shredded coconut as optional extras. Heat a heavy frypan over medium high heat and smear with oil (I tip a few drops of oil on the frypan and wipe it around with a paper towel). Place a quarter cup (40-60ml) of batter onto the frypan and use the back of a spoon to spread it into a circle of about 15cm diameter.

Cook for about 2 minutes or until set. (Here I found my pancake experience useful as it was quite similar in that the batter thickened and air bubbles began to appear when it was ready). Turn over and cook another minute or so. I found it took on a lacy golden brown pattern on the side where it first cooked but did not go golden brown on the other side. Repeat with remaining batter. Serve warm.

On the Stereo:
Clear: Conveniens
Posted by Johanna GGG at 23:01