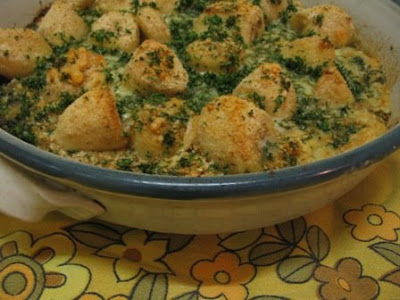 Before I started blogging, I had never thought to turn to historic cookbooks for recipes and insights. It is not that they wouldn’t have fascinated me, but that as a vegetarian, I had thought that old-fashioned recipes were boring and full of meat and overcooked vegetables. I saw other bloggers with an interest in old cookbooks and sadly thought they were full of the sort of recipes I would never be interested in cooking.

But gradually my interest has been piqued. I started looking at the history of various fruit and vegetables. Then the Neb at Nut Roast event made me curious about the history of the nut roast. I started finding that vegetarian cookbooks were being written much earlier than I had expected. As a former student of history, I can’t get enough of this.

So I was pleased to see that for this month’s Weekend Cookbook Challenge, founded by Sara from i like to cook) is Vintage Cookbooks. Carla of Chocolate Moosey has asked us to cook something from a cookbook published before 1980. Well, I have started to purchase a few vegetarian cookbooks from the 1960s so that didn’t seem too arduous. These give some lovely insights into how much has changed over the past 4 or 5 decades.

One of my recent purchases is Vegetarian Gourmet Cookbook by Joye McKinnell (1967). Many of her recipes are ones I am eager to try, although I will probably give the cheese curry a miss. But I was reminded that she is from a different time when I read her suggestion that each guest should be provided with cigarettes, matches and an ashtray at dinner parties. Likewise I was fascinated by her comment that ‘people often ask vegetarians hoe they can make suet pastry, which is normally made with an animal based fat.’ Gladly, I can report I have never been asked that curly question.

I went further and started looking into Australia’s cookbook history and have managed to purchase a couple of what seem to be cooking standards. The Green and Gold cookbook (9th edition) and Australian Cookery of Today Illustrated. Frustratingly neither have a date but it 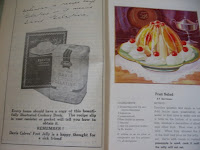 seems they are 1930s/40s and 1950s respectively. The advertisement on the right is for Gelatine which claims 'Davis' Calves Feet Jelly is a happy thought for a sick friend'. I don't imagine jelly would be advertised that way these days, not would we fancy fruit salad in jelly which is the illustration. Although I would not be surprised if some bright young chef out there is about to resurrect this retro dish!

As I continued my searches through the internet, I began finding online cookbooks and further insights. The best source of these seemed to be The Food Timeline. It not only has links to online collections but also gives advice on interpreting and adapting historic recipes. It was through this site that I found Pure Food Recipes produced by N. K. Fairbank Co in 1910. I was amazed by this quote which appalled me with its suggestion that I should only need two meals a day. (I don’t think so!):

‘Meats carefully cooked are, no doubt, more easily digested than some vegetables but, on the other hand, vegetables are clean and wholesome. Vegetable foods are concentrated and slow in digestion; hence the vegetarian eats but two meals a day, and of those two meals, if his diet is well selected, he receives more nourishment than the meat eater from his three meals a day’ p 43

And these choice words from an advert for nut oil in Dr Allison’s Cookery Book. Written in 1915, they still ring true today:

"Salads are not used sufficiently by English people, for very few know the value of them. All may use these foods with benefit, and two dinners each week of them with wholemeal bread will prevent many a serious illness.”

These above books interest me as being full of interesting recipes. But then there are online cookbooks like The Closet of Sir Kenelm Digby Knight from 1669 which is a curiosity but I can’t see myself making posset, gruel or bragot. Many of the ‘receipts’ are full of meat. Maybe I could consider trying The Excellent Marrow-Spinage-Pasties. But I think the instructions for the ‘puff-past’ might be beyond me – ‘Take a Gill of cold-water; two whites of Eggs, and one yolk; to a quart of Flower one pound of Butter; so rowl it up, but keep out of the Flower so much as will rowl it up.’

Leaving behind the seventeenth century, I chose to seek a recipe in the International Vegetarian Cookbook by Sonya Richmond from 1965. I had to purchase it because of the wonderful green retro cover. On the back cover we learn that Sonya is a hip young thing living in a spacious flat in Finchley (London) surrounded by tape recorders (to learn Italian) and gramophone records. She loves cheese, Chinese foods and dry martinis. Indeed many of her recipes, no matter which country they hail from, are full of cheese, cream and eggs. This made it hard for me to choose a recipe.

Indeed, I did wonder, what is the point of cooking from historic cookbooks? Is it so we can be astonished at how different our ancestors’ food was or so we can get a feel for the way they lived or so we can find their recipes really aren’t so different to ours? I guess it is creating connections with our past. I chose a recipe which both fascinated me for its retro weirdness but which might attract my attention in any cookbook as something strange but interesting.

'Bananas and Spinach au Gratin' is apparently a French dish but I am doubtful that many in France would have tasted it now or in the past. But it wasn’t just the strange combination that took me out of my comfort zone. The way the recipe was written made me realize just how much I am spoonfed by our modern recipes.

The lack of times, oven temperatures and some measurements meant that I had to think about what I was doing more than I usually might. How big a dish? How much butter? How long to 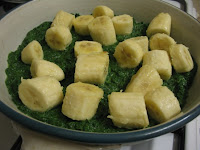 bake? When E asked how long to dinner I couldn’t just look at the timing in the recipes to help me give an estimated time of eating. But the lack of direction also reminded me that often I don’t really adhere strictly to measurements but use a bit of judgment and taste in grabbing a handful of breadcrumbs or a knob of butter.

Two things I really dislike doing are washing a large bunch of spinach and pushing food through sieve. But in the spirit of the recipe I bought fresh spinach which needed a thorough rinsing and, when it was tender I began to push it through a sieve. I might as well have been pushing a camel through the eye of a needle and finally resorted to finely chopping it with a large knife. It produced the same spinach mulch which reminds me of cut grass. But mostly I followed the recipe. Another dilemma was what to serve with it. I ended up tossing some boiled vegies with butter and parsley which seemed appropriately retro. 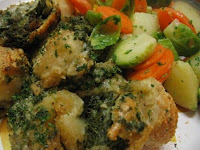 The resulting dinner was strangely pleasing. I quite liked the banana coated in crispy cheesy breadcrumbs accompanied by the creamy spinach. E gave a thumbs down and barely ate any of the gratin. In reflecting on it I thought maybe the chunks of banana were too confronting. He has agreed he would try it again if I halved and mashed the banana. So there might be a next time but I would be less generous with the butter. This is a dish of the Swinging Sixties that I suspect very few hipsters could boast of eating. Those who did no doubt felt as adventurous as I did last night.

Wash spinach and drain well. Sauté briefly in a little melted butter in a large saucepan. Cover and cook on low heat til tender and a lovely green. Puree either by pushing through a sieve or using a food processor or finely chopping with a knife. Stir in the cream and a tablespoon of butter. Spread evenly in a buttered casserole dish (mine was about 23cm in diameter, but smaller would be fine).

Peel and roughly chop the bananas and lightly fry in some butter till starting to soften. At this point I would mash them even though this is not in the recipe. Evenly distribute bananas over spinach.

Sprinkle with breadcrumbs (a couple of small handfuls), grated cheese and parsley. Bake in a hot oven (230 C) for about 20-30 minutes until topping is crisp and golden brown. Serve with steamed and buttered vegetables for the full retro feel!

On the Stereo:
Ultra Lounge: Various Artists
Posted by Johanna GGG at 14:16