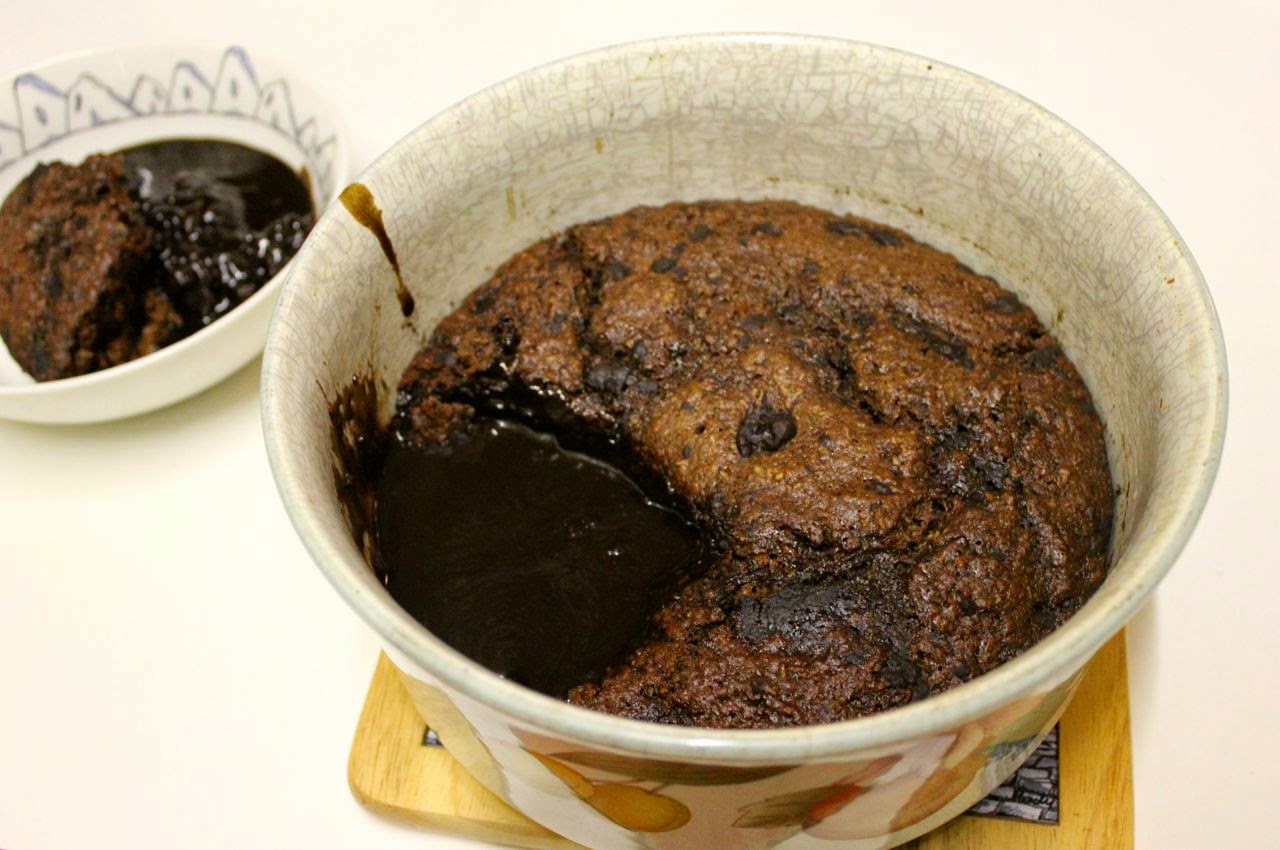 When I lived in Edinburgh, I would frequently visit my brother Andy and sister Chris in Dublin. This was all the family I had over that side of the world. Without fail, Andy would cook us chocolate pudding just like my mum used to. He made it so often that he didn’t even need a recipe. For a while he experimented with different versions but always came back to the original. It felt like home.

My mum made us "sweets" (or dessert) almost every night when I was growing up. One of the most frequent and favoured sweets was chocolate pudding. In fact, we loved it so much that my dad once attempted to make it when she was in hospital for the birth of one of my siblings and we never forgot his sloppy chocolate pudding. 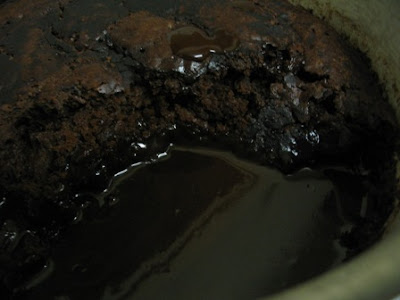 A few months back, I decided to make it for E and I but I couldn’t find the recipe. Andy had emailed it to me ages ago but I had lost it so I just used the Australian Women’s Weekly recipe, naively assuming that ours must be a common Australian recipe. I know from my blogging that ‘chocolate pudding’ in America is not my chocolate pudding. Mine is a hot, lightly crusted chocolate sponge swimming in a pool of dark chocolatey sauce. Others might know it as self-saucing chocolate pudding. 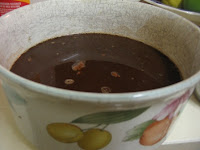 The pudding I made was disappointingly bland and I returned to my mum for the recipe, assuming she had the original. She couldn’t find it and thought that Andy might have it and then in a burst of clarity remembered the recipe and gave it to me over the phone. The instructions that I scribbled down might show just how natural it seems to me to make it: ‘Mix all pudding ingredients and place in bowl – bake 150 C for 1 hour-ish’. It also shows how simple it is.

My mum also told me that this was her mum’s recipe. That makes sense to me as one of my early memories is being at Nanny’s place in South Caulfield that she left when I was about 12. I remember her stirring the pudding in a bowl with a wooden spoon. I think at the time it struck me as odd to mix a chocolate pudding batter by hand because I knew that my mother always made chocolate cake with the electric beaters.

The trick to my grandmother’s recipe is that it has more cocoa and is cooked slowly in a cooler oven than the AWW. My mum often used dessert spoons to measure cocoa when I cooked with her as

a child and following her recipe I have used dessert spoons. Ironically they are larger than the tablespoons I now use (but not larger than mum's old tablespoon that I may photograph for my blog some time). For clarity I have photographed a spoon of cocoa next to a tablespoon.

As any chocoholic will appreciate, the more cocoa, the better. So in this recipe heaped spoonfuls are best. In fact, I think my pudding last weekend was particularly good because I lost count of the spoonfuls of cocoa and probably put in a little more than the recipe called for.

I made it to serve with nut roast on the weekend to complete a meal like my mother use to make. The pudding you see here is my Nanny’s recipe and it truly is manna from the gods. Dark, rich, soft, seductive. It comes out of the oven filling the kitchen with a heavenly chocolatey aroma. It seems something of a miracle that you put it in the oven with flavoured water sitting on the pudding batter and it comes out with a sponge pudding sitting over a wonderful thickened sauce. It is the finest of comfort foods and brings back memories. 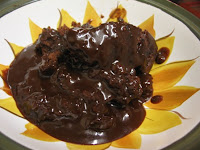 Imagine 7 small excited children sitting around a large wooden kitchen table watching my mother’s large serving spoon hovering over the pudding. That is a happy image of my childhood. The moment that the spoon cracks the crust and digs into the sauce is always a happy one. The first serving might look good with the smooth topped wedge of pudding surrounded by sauce but inevitably by the end, the servings are unattractive messy clumps covered in sauce. But no matter how it looks, it tastes so good.

My mum always served it with thickened cream (which strangely is a thin pouring cream) but I always refused because I never liked cream. E had cream. He thought he should have custard with it which shows how little he understands the charms of chocolate pudding.

Chocolate pudding is still frequently made in my mum's house, especially when any of the family are over for dinner. She wouldn’t dare stop making it because it is always in demand.

I am sending this to Bella Baita View for this month’s Apple and Thyme, an event founded by Jeni Of Passionate Palate and Inge of Vanielje Kitchen that is dedicated to remembering cooking with and by members of our families.

Stir all the pudding ingredients together till combined and spoon into a greased ovenproof baking dish. (I like to use a round 20cm diameter dish that I got for my 21st birthday from my siblings.) Mix the sauce ingredients in a jug and stir well. Pour over pudding (but don't stir pudding mix and sauce together once in baking dish). It looks odd and watery if you have never done it before but it works. Bake in a 150 C oven for about 1 hour til top is crusted and the pudding smells good. Serve with cream if desired.

NOTE: I have updated the top photo (2012).  Hopefully one day I can use a few more photos that do this favourite dessert more justice.

On the Stereo:
The Good Son: Nick Cave and the Bad Seeds
Posted by Johanna GGG at 08:32