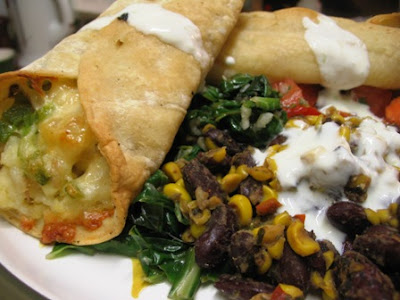 It was E’s birthday early last week and the book I ordered is still en route, the ideal birthday card was sold out, and one of the shops I went to buy presents had closed down. So it came as no surprise that the dinner I made him this year felt a bit like a dress rehearsal - tacos without salsa and a pudding that needs a bit of work! But I did learn about toothpicks, tacos and Oaxaca.

He asked for a Mexican meal so we agreed on Oaxaca tacos from the Café Flora Cookbook. They looked a little different to the chilli non carnes that I usually make for tacos and apparently are popular at Café Flora. This meal requires quite a bit of preparation and felt fitting for a special celebration.

My first challenge was toothpicks. It was helpfully listed with the ingredients and I was sure I had them. But as I began preparing dinner I searched the kitchen with no luck. Finally I found a 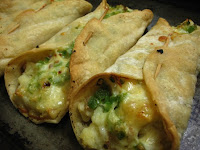 packet of little Australian flags on toothpicks that I had bought years ago for a party and never used. It felt a little unpatriotic tearing the flags off but I realised that the toothpicks were crucial to the dish. Whenever I have had tacos previously, I have bought a box of crisp taco shells. These were tortillas dipped in hot oil and held together by toothpicks. They crisp in the oven so that when the toothpicks are removed after baking the tortillas hold their shape. Next time I will be more careful in checking I have toothpicks!

The tacos were heavenly with the soft cheesy potato encased in the crisp tortilla – worth every drop of oil they were fried in! The bean stew was incredibly tasty. E loves fresh coriander (cilantro) and has chided me before for leaving it out. So, for his birthday, I reluctantly bought a bunch and was pleasantly surprised at how it the flavours of the stew. The silverbeet (swiss chard) was fantastic with the lemon garlic vinaigrette.

But as we sat down to dinner, I said to E how strange to have a Mexican meal with no tomato. It was only later that night when I glanced at the recipe again that I realised my oversight. I had merely followed the featured recipes and neglected to read the full list of components. Hence I had missed the tomato salsa and a lime yoghurt sauce which were detailed elsewhere in the book. Fortunately we had enough for two nights and so on the second night I made these sauces. They did improve the meal, but my new-found appreciation for fresh coriander waned again as I tasted it raw in the salsa.

I was curious about why they were called Oaxaca tacos. I had thought it was a variety of squash which was obviously wrong as there was not a squash to be seen in the meal. Wikipedia put me right. Oaxaca is a city and a state in the south of Mexico. It is notable for containing more speakers of Indigenous languages than anywhere else in the country. An abundance of fruit and

vegetables grow in the central valley, and Oaxaca is knows for its black beans, corn and chocolate are common foods.

So my tacos were a little less than authentic with the change from black bean stew to kidney beans. My salsa was a little less than fiery. The name of the salsa, Pico de Gallo, translates as the beak of the rooster, and is so called because originally it was eaten by using the thumb and forefinger. I was a bit lacksadaisical with the measurements and tried to reproduce which I did below because it tasted fantastic. If they eat like this in Oaxaca, then I think it is a place I would love to visit.

Dhivya at A Culinary Bazaar has started a new event called A Worldly Epicurean's Delight (AWED). The theme for the first month is Mexican Food, so I am sending this her way.

Prior to starting tacos, it is best to have made bean stew, lemon garlic vinaigrette and salsa. The stew and vinaigrette can be done the previous day (as can the mashed potatoes).

Preheat oven to 200 C. Cook potatoes for 20-40 minutes til tender. Mash with butter and salt. Combine cheeses and chilli flakes.

Heat about ½ cm of oil in a frypan. Place first tortilla in hot oil for 8-10 seconds. Turn and leave for another 8-10 second. The tortilla should be coated in oil but not crisp. Repeat with other tortillas and keep warm (Recipe said to cover with foil - I just piled them on a piece of kitchen towel and they kept warm enough).

Place a tortilla on a flat surface. Place a third of a cup of mashed potato along the middle strip. Sprinkle mashed potato with 1 tbsp of capsicum and 2 tbsp of cheese mixture. Bring edges of tortilla up to overlap across the filling. Use 1 or 2 toothpicks to secure (like you would use a pin in dressmaking). Repeat with remaining tortillas.

Place filled tortillas in a roasting dish and bake for 15-20 minutes til cheese is melting and tortilla is crisping up.

Divide bean stew and tangy silverbeet among 4 dinner plates. Remove the toothpicks from the tacos and arrange two tacos on each plate. Top with salsa and lime yoghurt mixture.

Place all ingredients in a smallish saucepan. Bring to the boil and simmer for 15 minutes. The recipe suggests adding more water or vegetable stock for a soupier consistency but I like mine quite thick.

To make the lemon garlic vinaigrette, mix ingredients except the silverbeet - either in blender or whisk together. (I just used a whisk). Set aside.

Wash silverbeet and dry as much as possible by shaking water off or patting with kitchen towel. Remove and discard stems of silverbeet and roughly chop. Either steam silverbeet til just tender (about 5 minutes) or gently fry silverbeet in a lightly oiled frypan (I used the frypan I had been oiling the tortillas in). When silverbeet is wilted, add vinaigrette and toss to coat. Serve hot.

Combine all ingredients in a small bowl.

On the stereo:
Scotch Mist: Various Artists
Posted by Johanna GGG at 22:06