Seduced by Strawberries and a Pudding 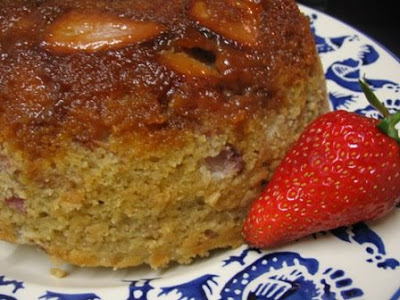 Curly Locks, Curly Locks, Wilt thou be mine?
Thou shalt not wash dishes, Nor yet feed the swine;
But sit on a cushion and sew a fine seam
And feed upon strawberries, sugar and cream.

Mike of Mike’s Table has asked us to make something with strawberries for his Strawberry Seduction event. Well I couldn’t resist. I don’t eat strawberries a lot but when I do I love them – in a salad, a juice or a fruit salad. In honour of the event I made a juice of half a pomegranate, 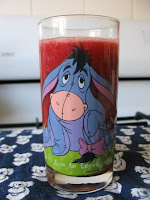 125g strawberries and 1 cup of apple juice (which I blended and sieved). Then I started researching strawberries. There is so much info about that at the end of the post I have listed some websites which offered up some fine esoteric information.

The strawberry is a member of the rose family and is the only fruit with seeds on the outside rather than the inside. Apparently there are an average of 200 seeds per berry! I found this wonderful description: ‘The strawberry fruit consists of many enlarged ovaries massed together on a single receptacle.‘

The name strawberry is said to be derived either from ‘strew’ berry because the berries were strewn around the leaves of the plant or from the straw used to mulch the berries. The Fraser clan in Scotland were originally French migrants in 1066 whose name was derived from the French word for Strawberry (Fraise).

The first record of strawberries being mentioned in literature is by a Roman senator called Cato sometime between 234-149 BC. The first descriptions published were about the medicinal uses of the plant rather than the fruit. It has been believed to alleviate symptoms of melancholy, fainting, all inflammations, fevers, throat infections, kidney stones, halitosis, attacks of gout, 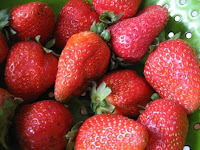 digestive upsets and diseases of the blood, liver and spleen. Strawberry juice supposedly whitens the teeth and as far back as the Thirteenth Century, strawberries were used as an aphrodisiac!

Many different varieties of strawberries have been found throughout European history, including a bizarre one called the Barren Strawberry which is described as a ‘sterile freak variety’. Until the discovery of the Americas in the Sixteeenth Century, strawberries in Europe were the wild type (and as I have never had wild strawberries I am still finding them hard to envisage but I think smaller and less sweet). But it was the Virginian Strawberry, that came to Europe from America in the early Seventeenth Century, together with a chilean strawberry which were the proud ancestors of the plump juicy red strawberry that we know and love today.

Strawberries feature in European cultural life. They appear on monastic paintings of the Virgin Mary and infant Jesus in the middle ages. They are said to represent noble thought, modesty and righteousness. However when Hieronymus Bosch painted it in his ‘Garden of Delights’ or ‘Strawberry Tree’ painting it is thought to represent voluptuousness. Shakespeare had Desdemona’s handkerchief decorated with strawberries in Othello.

One curious link with strawberries is the development of gothic architecture and literature. Horace Walpole, son of British Prime Minister Robert Walpole and cousin of Lord Nelson, bought Strawberry Hill in 1748 and remodelled it into a masterpiece of towers, turrets, arched doors and windows bedecked in all manner of ornament. People visited from all over and were inspired by the ‘spurious medieval architecture’ that became known as gothic revival. Strawberry Hill appeared as a haunted castle in the first gothic novel, The Castle of Otranto in 1764. I can’t help 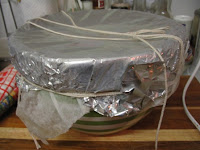 As well as cultural, artistic and literary references, strawberries are high in folate and vitamin C. I was pleasantly surprised in the UK at just how good strawberries could taste. They were definitely better than those we get in Australia. There is nothing like a Scottish garden fete with scones 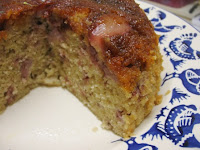 I was going to send my strawberry, pomegranate and apple juice to Mike for his event but I got so enthused about strawberries while the weather was cooling down that I promised I would make E a strawberry pudding. There aren’t many strawberry pudding recipes of the sort I envisaged. I fancied some strawberry and rhubarb crumbles or a sponge pudding but ended up adapting a mango steamed pudding recipe. I don’t like mangos much so was pleased to try the pudding with strawberries. The recipe isn’t hard but it does require time and equipment.

When I told E that I thought that the toffee and fruit on top were unnecessary he said they were essential to a sponge pudding (his sponge pudding is my steamed pudding). I served it with custard I make from a powder mix – I don’t have enough dedication to make custard from scratch. But I make it so rarely that I had to ring my mum to remember the quantities (2 tbsp custard powder, 1 tbsp sugar and 1 cup milk). I tried blending strawberries in the custard one 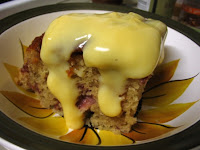 night but my mum was right – the vanilla custard was preferable (but I do wonder if I should have made a strawberry puree to serve with it too).

E was delighted. He speaks of sponge pudding with custard as manna from the gods. The strawberries contributed to the moistness and sweetness. The lime and cardamom gave it an interesting twist. It is not a dessert I will make very often but it is a wonderful way to welcome wintery nights in front of the heater. I am sure Mike will enjoy it.

Grease a ceramic or glass 1.5 litre pudding bowl (mine is 2 litre). Cut out a circle of baking paper to line the bottom of the bowl. Place in large stockpot either in steamer insert or with trivet or upturned saucer to place bowl on and pour in enough water to come halfway up the side of the bowl. Remove pudding bowl. Heat water while you prepare the pudding.

Combine sugar and water in a small saucepan and heat gently til the sugar dissolves – swish it around a little. Bring to the boil, reduce heat and simmer without stirring for approximately 6 minutes or until it turns a golden caramel colour – watch it because it can quickly burn. Pour sugar mixture into the prepared pudding basin. (This is just toffee which becomes rock-hard when it cools – so you can only clean the saucepan by heating cold water in it!)

Beat the butter, sugar and lime rind til light and creamy. Add eggs beating after each one. (I did all this by hand.) Fold in all the chopped strawberries and half the flour. Mix in the remaining flour, almonds and cardamom.

Spoon the pudding into the prepared bowl. Cover with either a lid or a layer of baking paper and a layer of foil (with a bit of room to allow for rising or a crease in the paper and foil). If you don’t have a lid, tied some string tightly around the outside and then tie some string across top to make a handle to lift the pudding in and out of the stockpot. Lower bowl into the pot of boiling water. Reduce to a fast simmer. Cover pot with a lid and simmer for about 1¼ hours. Top up the water during cooking if necessary (but you probably wont need to).

Remove pudding bowl from stockpot. The pudding is cooked when it is risen and firm to touch. I left mine sitting in the bowl for almost an hour until I was ready. When about to serve, cut string and remove paper and foil. Use a knife to run around the edge and turn onto a plate. Cut into wedges and serve with cream or a warm fruit sauce (or both?)

Update - additional information I've found since this post:
- The Joy Division single, Love Will Tear Us Apart was recorded in Strawberry Studios in Stockport.

On the stereo:
Looking for Europe: the neofolk compendium: Various Artists
Posted by Johanna GGG at 21:15