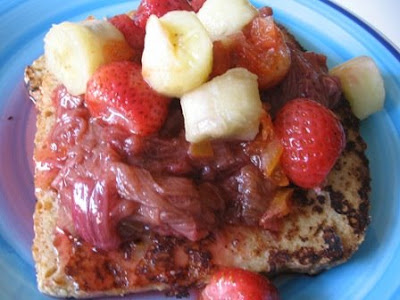 I’ve never eaten French toast because I couldn’t bear the thought of bread soaked in eggs. I once had a housemate who made it regularly and generously offered to make it for me but I shuddered when I watched him cracking open egg after egg. Viewing it on menus and neighbouring plates in cafes has filled me with desire but not enough to overcome my egg-aversion. But there have been days I have thought I would love to eat it if only it wasn’t so full of eggs.

So I was excited to find there are vegan versions of French Toast. This weekend I decided I would make some for brunch. When I told E of my plans he surprised me by being unusually knowledgeable.

Now I expect him to know anything and everything about music and movies. Last week when a work colleague asked what movie was being filmed in Melbourne with Nicholas Cage in it, I didn’t have a clue but was confident that E would know. Within an hour of emailing him the question, I got the answer. Apparently the movie is called Knowing. But most culinary matters are beyond E’s ken.

So I was impressed that he told me his granny used to make him French Toast and that he had learnt from her that it was a recipe used in wartime. He thinks that this was because it made eggs go further in days of rationing. So I had to go online and investigate.

The Food Timeline says that French Toast can be traced back to the Roman Empire. It is known by many names in many countries. The most poetic is the French name ‘pain perdu’ which literally means lost bread and alludes to the dish being a way of reinvigorating stale bread. It is popularly thought to be a humble recipe employed to use up every scrap of food, but in fact was also made with the finest of foods and spices as a rich man’s fancy. Nothing about the war. Nor did Wikipedia enlighten me. In fact the only reference I could find to French Toast in the war 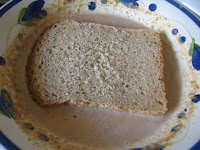 was a claim that the name was changed from German Toast to French Toast in America. I will keep searching and would welcome any information.

So, it seems that French Toast has a fine heritage, but I cannot substantiate E’s claim. However, I can tell you that he does know more about eggs than me because he loves them. In fact, the first time we ate out together he had a fried egg roll at an internet cafe! I suspect it was covered in tomato sauce.

Yes, E likes eggs and tomato sauce. So when I made the French Toast he was surprised when I served it with fruit. He had expected it with tomato sauce. I asked how his granny served it and he said she just made it as a snack for him when he was a wee boy.

I had some rhubarb left from the bunch that I bought last weekend. I also fancied trying my hand at roasting strawberries after being impressed by SweetDesigns' success recently. And lastly, I wanted to make a version of my mum’s bananas with lemon juice and sugar that she made us 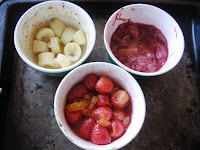 when we were kids. I didn’t put a lot of sugar in but served the fruit with a generous amount of maple syrup. I was also pleased to be able to use my pomegranate juice and my candied orange but orange juice and orange zest would work as well.

The French Toast didn’t crisp up the way I had hoped. It was only by the time I got to the third piece of toast that I finally achieved the golden brown fried look. I know that frying it in a pool of oil is one alternative but I intend to try some other dipping batters to see if others are more compliant. This one was interesting but it didn’t really enthuse me. Did I tell you I don’t really like soggy bread much either? And maybe the fantastic heavy wholemeal sourdough from Hope Farm was not the right bread for the recipe. I will try French Toast again but next time I think I will take E’s advice and eat it as part of a savoury brunch.

On the other hand, the baked fruit was heavenly but I think I would prefer it with pancakes. I followed a recipe which suggested rhubarb would take 45 minutes to bake and I thought I had lots of time for the laundry, watering the plants and blogging before breakfast but it turned out that 20 minutes was ample. E thought the rhubarb a bit tart but it was nothing that couldn’t be fixed with a bit more maple syrup. I have written a recipe for the fruit which is a composite of what I did and what I would do next time. Other fruits could be used but unfortunately I am less inclined to turn on my oven summer when stone fruits are plentiful. However, I am looking forward to experimenting more with baking fruit for brunch.

Place almond butter, milk and cinnamon in a food processor and blend til smooth. (I did a bodgy job because I was trying to avoid the noisy food processor so early in the morning but in retrospect I would advise it.)

Pour milk mixture into a shallow dish (like a pasta bowl). Heat a heavy frypan. Pour a drop or two of oil into it and wipe with a paper towel so the surface shines with grease. Place a piece of bread in the milk mixture and flip over so both sides are soaked in the milk. Place soaked bread on the frypan. Fry a few minutes either side over medium heat or til bread is golden brown on both sides. Serve with baked fruit and maple syrup.

I couldn’t find a baking dish the right size and used separate ramekins for the rhubarb, strawberries and banana. I think in retrospect I would put rhubarb and strawberries together. So you can either divide up the sugar, orange and pomegranate juice and bake the rhubarb and strawberries in two ramekin dishes or bake together in a small baking dish. Toss fruit with juice, sugar and orange to coat. Cover with foil and bake in a 200 C oven for about 20 minutes or until soft but still keeping their shape. (Check and stir after about 10 minutes.)

Once the rhubarb and strawberries are in the oven, toss banana, lemon juice and sugar in a ramekin. Cover with foil and place in oven for 20 minutes. (Check and stir after about 10 minutes.)

Serve hot baked fruit over French Toast (recipe above), pancakes or waffles. If not sweet enough douse in maple syrup.

On the Stereo:
John Denver’s Greatest Hits
Posted by Johanna GGG at 14:56