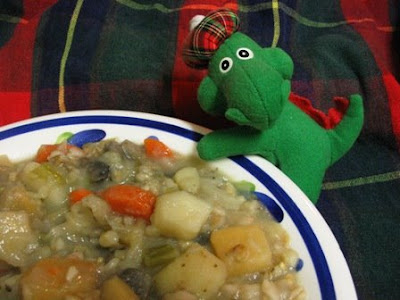 Some weeks ago, E reminded me it was Tartan Day on 6 April and suggested I make something Scottish on the day. Tartan Day is for those outside Scotland. E says it is a canny marketing ploy to promote Scottish tourism. Wikipedia says it is a day for the Americans to celebrate their Scottish heritage. I was only too happy to think Scottish in the kitchen to remember some of the good times in Edinburgh.

Then began the discussions about what to cook. Anything deep fried was E’s suggestion. It was rejected on health and safety grounds. I decided to cooked some fine Scottish stodge instead. 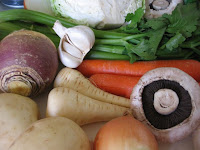 While living in Edinburgh, I began making a vegetable barley soup quite often. It convinced me that spuds, turnips (swedes or rutabagas to other nations) and barley are the Scots’ grand contribution to home cooking.

I suspect the soup appealed in Scotland because it sticks to your insides and insulates you against the cold. It is a simple repast made from the sort of ingredients that might have been available in Scotland before supermarkets began flying in vegetables from sunnier nations. It is the sort of meal you can imagine to be bubbling away in a large black pot hanging in the fireplace of a crofter’s blackhouse. The wee wifey would ladle dollops into large bowls for workers from the fields. The colder weather here makes me crave such good honest food.

This is one of those recipes that is about sharing what I do rather than giving hard and fast rules. I just throw everything in a big stockpot and simmer it until the barley is cooked and the 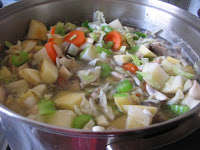 vegetables softened. The barley thickens and clouds the stew. I particularly love how the potatoes and swedes take on a malty flavour. Because it is a while since I have made it, I put a little more water than it needed so I scooped out some and ended up with a couple of cups of stock in the freezer. I like it to be so thick that a spoon can stand up in it. But I know there are lots of barley soups which aren’t quite so stodgy. It is a personal choice. But this is fine comfort food that reminds E of his mum’s home cooking (although he said his mum's wasn't so grey).

To further celebrate Tartan Day, I thought I would share some Scottish treats that are full of memories of Edinburgh. These are everyday fare in Scotland but hard – although not impossible – to find in Melbourne.

Walkers Oatcakes. On an early visit to Scotland I went to a performance of a gaelic choir and enjoyed a cuppa tea and some oatcakes with cheese afterwards. In Australia it would be dry biscuits with cheese. I must try and make oatcakes some time but until then, I will make do with Walkers. 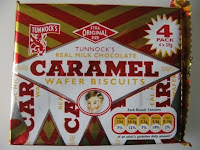 Tunnock’s Caramel Wafers. Crisp wafers, chewy caramel and covered in milk chocolate. In my opinion far superior to Tunnock’s Tea Cakes (biscuit and marshmallow covered in chocolate, and not as good as our Chocolate Royals) which E quite fancies and his mum would often buy for him as a treat. 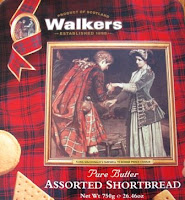 Walkers Shortbread. E is very particular and this is the shortbread of choice in our household. I once worked at an organisation which had shortbread for meetings. When we were hungry we would raid the shortbread cupboard and one raid too many killed off any desire I ever had for shortbread. In Melbourne Walkers shortbread is everywhere at Christmas time but harder to find in between.

Heather Cream. A creamy whisky liqueur in the style of Baileys Irish Cream. We prefer this as it is a little less sweet than Baileys. In Edinburgh we bought it at Royal Mile Whiskies but in Melbourne I was amazed to find it in a little supermarket in Sydney Road.

We finished our Tartan Day meal with Orkney Ginger Broonie and a wee dram of Heather Cream. As E is fond of saying, it’s a lovely drap of watter.

Place all ingredients in a large stockpot. Stir the ingredients and check the water tastes salty. If not, add more salt. Bring to the boil (this took me about 15-20 minutes) and then simmer til barley cooked and vegetables soft (this took me about 30-40 minutes). Stir occasionally to check it is not sticking to the bottom of the stockpot. If it gets too thick you may need to add a bit more water. Taste soup to check seasoning. If possible sit overnight before serving. Serve hot with freshly ground pepper.

My Notes: If you don’t have a large stockpot I would recommend halving this recipe as I filled the pot with these amounts. The amounts here can be altered to suit your taste and the availability of vegetables.

Update June 2011 - made this for first time in ages - used a few less veg, a bay leaf, some sage, about 10 cups water so it wasn't so gluggy, fried the veg in a little oil while I chopped them and then simmered the barley with them for about 30-40 minutes - excellent!

On the Stereo:
In Search of Scotland: Various Artists
Posted by Johanna GGG at 22:18