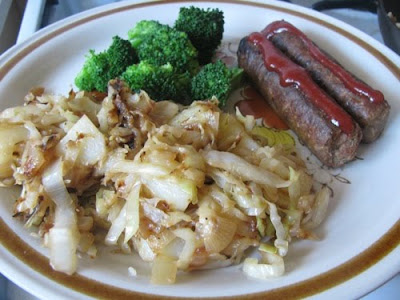 Happy St Patrick's Day. Today I present you with a good bog Irish dish to celebrate! Last year I decided I would have loose themes for each weekday dinner. It didn't work. Mondays however have become our bangers and mash night. E can help with vegetarian sausages under the grill and preparing potatoes. I have my little burst of creativity with experimenting with vegies and flavours in the mash. Sylvia often will eat some of it. It is the genesis of some of my simpler dishes that I don't often post. Today's seemed worth capturing. 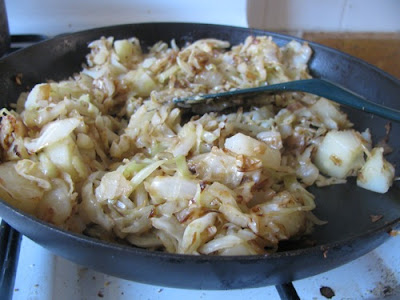 This week Monday fell on a Tuesday due to the Labour Day public holiday. I had an old quarter of cabbage. I was tempted by colcannon. But I love fried cabbage. So I threw it in the frypan, intending to serve it alongside the mash. In the end there wasn't much potato so I just tossed them together with some garlic and parmesan. Served with vegetarian sausages and steamed green broccoli, is was a success.

Cabbage and potato are so central to the traditional Irish cuisine (as I should know, coming from Anglo-Irish stock). Parmesan is not but I know the Irish love their cheese. If I had had any facon left I would have thrown that in too. Even so, I am confident this would go down well in Ireland on St Patrick's or any other day. E thought it would also make a good neofolk dish, if that is your preference! 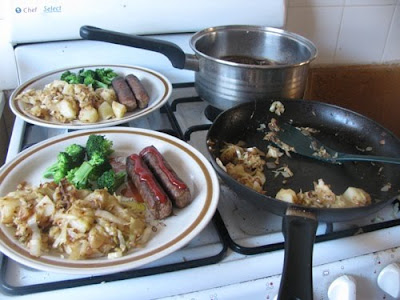 I had hoped I might have made a nut roast for my Neb at Nut Roast II blog event for today but our kitchen is still a mess with renovations. It is still functional but less so than usual. I have lots of ideas for nut roasts to make as soon as the kitchen is back to normal. To participate in the event, go to the announcement and/or the rules. You have until 5 May to send me a nut roast.

Cook chopped potatoes for about 15 minutes or until just soft. Drain and set aside. Heat oil in a large non-stick frypan over medium heat and fry onion for a few minutes until translucent. Add cabbage and garlic. Cook until cabbage is soft and starting to brown. This took me 20-30 minutes. Add potatoes and cook for a few minutes so they are heated through. Remove from heat and stir in parmesan cheese. Season to taste with salt and pepper. Serve hot.

On the Stereo:
Christy Moore
Posted by Johanna GGG at 18:48