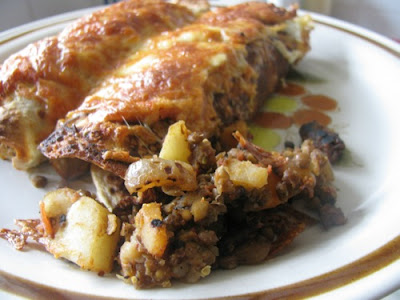 I had thought that I had baked my last dinner with our trusty old oven. Half our kitchen benches were taken out on Saturday with a promise of returning to fit a new oven and new benches yesterday. But we are still waiting. Dinner doesn't wait. Nor do pancakes. Today is Shrove Tuesday. Despite half our kitchen being packed in boxes, I wanted to make pancakes for dinner. 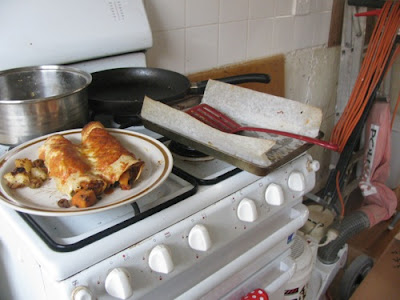 The kitchen table is in the loungeroom with glass doors and a rangehood on it. I am without my favourite knives but I did find my favourite chopping board and frypan from the boxes in the rest of the house. I even had to go and search for an oven mitt when the oven timer rang. I've been avoiding buying too much food while space is even more limited than usual. 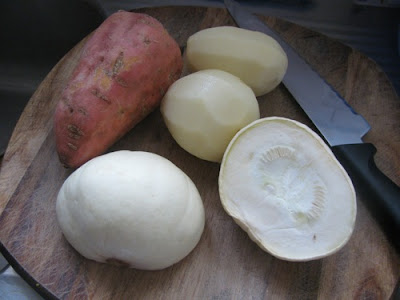 Above is a selection of vegetables gleaned from the kitchen. At the forefront is a squash that my neighbour gave me. Her mother gave it to her but we weren't sure what it was so it might not have suited their diet. I was told it was like zucchini so decided it would lighten the filling somewhat.

After I took this photo my camera batteries gave out and I couldn't find any more because they were packed away (I prefer a battery charger but the last couple of chargers have died). Fortunately E was able to pick up some for me on the way home. 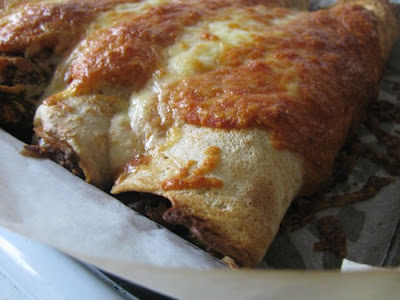 Sylvia was quite interested in the pancakes but didn't fancy actually tasting the baked version. She ate about half one with her chickpeas and vegies and then had one with a smidge of honey for dessert. I must try these again for her. I loved the ritual of my mum making pancakes when I was a child.

As for E and me, we loved the pancakes stuffed with potatoes and lentils. They were very tasty and satisfying, even without a side salad or vegies. I felt like it was a great way to use up some food that had been lingering. Though even while we enjoyed dinner, we couldn't escape the temporary nature of the house. Sylvia, who had eaten earlier, found a plate stand, tried to sit on it and fell off. Dinner had to be set aside for a cuggle.

Once things are complete, I will write a bit more about the changes in the kitchen. I hope it will be soon.

Meanwhile I am sending these pancakes to My Legume Love Affair (#33), founded by Susan of the Well Seasoned Cook and hosted by Dee and K of Ammalu's Kitchen this month.

Previously on Green Gourmet Giraffe:
This time last year: Panzanella and return to work
This time two years ago: WTSIM… Pineapple and Banana Chutney
This time three years ago: Nutroast in the time of vagueness

Pancakes:
Adapted from Sarah Brown
(makes about 7-8)
Stuffing:
Topping:
Cook potatoes and sweet potato in salt water until soft. Drain and set aside.

While potatoes are cooking, make pancakes. Lightly whisk the egg, milk and oil with a fork. Add wholemeal flour and whisk well until smooth (or use a blender).

Heat a non-stick frypan over medium head and lightly oil the frypan either with a little oil and some kitchen towel to wipe it over the frypan or using oil spray. Pour about 1/4 cup of mixture, or a little more, into the frypan and swirl around a little to cover as much of pan as possible. Fry the pancakes for a couple of minutes until the mixture is cooked through and is a light golden brown when flipped. Cook for about 1-2 minutes on the other side until lightly browned. (NB these are thin pancakes and don't bubble up when ready to flip unlike the thicker ones I ate throughout my childhood.) Keep pancakes in a stack on a plate until you are ready to assemble with stuffing.

To make the stuffing, fry the facon for about 5 minutes in a teaspoon of oil until starting to brown. (I used the same frypan I used for pancakes.) Add onion and fry until it is browned - I gave it a while until little flecks of char were appearing. Add squash or zucchini and cook until it softens. Stir in lentils and spices. Add potatoes and sweet potatoes and stir well, squashing a bit with the back of the spoon.

Grease and line a baking dish. Preheat oven til 220 C. On a flat surface, place a pancake and put 2-3 generous dessertspoons of filling along the middle. Roll up and place on baking tray. Spoon queso sauce over the top and sprinkle with mozzarella cheese. Bake for about 25 minutes until cheese is golden brown.

Update: if like me you only fill half the pancakes, the rest of the filling is delicious mixed with some brown rice.

On the stereo:
The Greatest Hit: Teardrop Explodes
Posted by Johanna GGG at 19:14